A hedge of physocarpus is gaining popularity not only because of its beauty, because she is able to hold animals and also allows you to hide everything that happens in the area from prying eyes. Thus, the process of planting is not complicated, and the cost of seeds and seedlings small.

One variation of such fence becomes a hedge of physocarpus English, a photo of which can be seen below. These plants reach a height of three meters and have a thick crown. Physocarpus different resistance to drought and simplicity of maintenance. 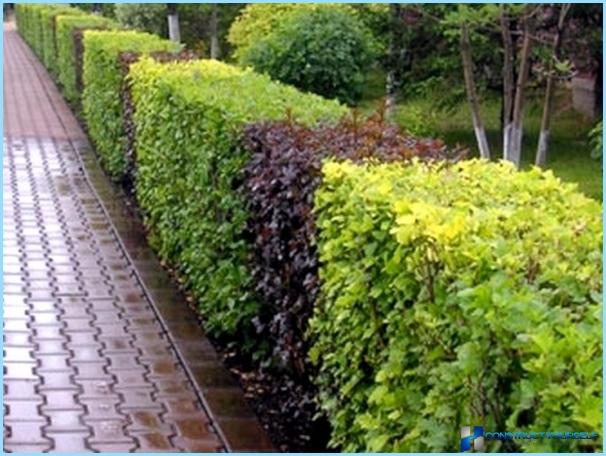 How to prepare the site for planting ↑

Mowing hedges and planting are not difficult as it may seem to those who had no experience in this lesson. In order to plant a plant, you need to prepare the following tools:

In order to hedge saved the owners of the site from dust and outside noise, you need to put quite a large number of bushes. If planting occurs in a row, then 1 meter square has from 3 to 5 bushes.

To hedge perceived one, it is necessary to dig not just pits and a trench. After preparation of land the seedlings are set in a staggered manner in 3 rows.

Physocarpus is not in need of constant care, but at the same time for its normal growth and preservation of the attractive appearance of the fence should follow a few simple steps. These include: removing frozen and broken branches, as well as maintaining some form of the shrub. 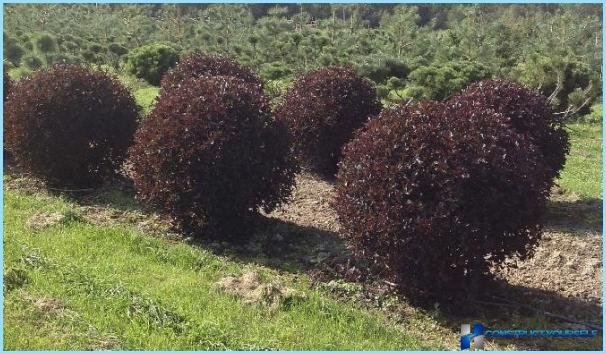 It is important! The young shoots should be watered frequently, while old enough two times a week.

The frequency of watering plants depends on what kind of soil they are planted and the type of climate in a particular area. To feed a live fence should be in spring and autumn. Used fertilizer with nitrogen or mineral content. Apply the first spring and the second autumn.

Some owners of plots with hedges do not seek to trim the branches of the Bush in the first years of its existence thinking that promotes rapid growth. Just because of such action, the lower part of the fence can become bare, and the entire plot is visible from the outside of the fence. To avoid this, it is enough to cut off the bottom branches, which immediately begins to branch.

Methods of reproduction of physocarpus ↑

There are two basic ways used by many owners:

Planting physocarpus for hedges in the area is more lit areas, because otherwise the leaves after some time become less vivid. One should not embark with seeds. This is because after the Bush increase, the color of its leaves can be uneven. Much easier to buy physocarpus with closed root system. Planting occurs in the fall or spring.

For planting dug a pit having a diameter of about half a meter on the bottom of which are placed fertilizer or humus. This is followed by straightening clod of earth on the roots of the plants and installation to the place prepared, which is then covered with soil and watered composition conducive to the enhanced growth of physocarpus. The hedge should be periodically watered with water, and the ground around the trunk needs to be loosened, so that its surface has formed a crust.