Evergreen plant Buxus or it is also called boxwood, many owners of cottages, country houses, and especially designers love to use, carrying out the landscaping of the adjacent territory. A fence of boxwood not only the original solution which gives personality to the private house or the country, but also protects from prying eyes. A well located on the land, will become a decoration. 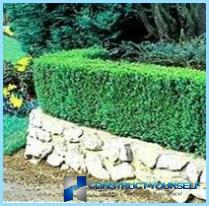 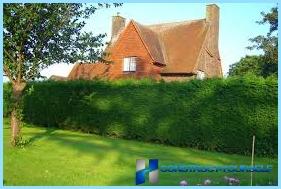 Boxwood and its features ↑

Boxwood is a slow growing plant with thick shiny leaves, shoots which can be formed using cutting and turning the shrubs even in works of art. Shoots on the Bush sticking out, have a tetrahedral shape, and the leaves are thick and attractive. Boxwood blossoms and forms fruit in which seeds are formed. The seeds are black and resemble an Apple. Have a great germination rate, but are formed in late autumn and this limits the propagation of boxwood seeds.

Some species of boxwood that are used for forming curbs, hedges, grow for 500 years and reach a height of up to 2 ? 5 m But is most often used as dwarf boxwood, which are formed hedges small height and borders.

The plant is undemanding to soil type, is not afraid of shadows, sun and grows well in shaded areas. 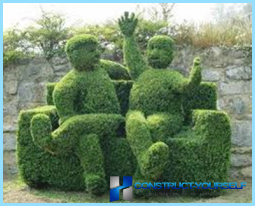 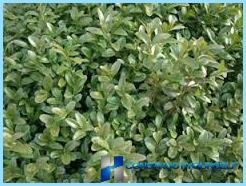 The development of the fence ↑

A hedge could be planted instead of fence, parallel to the existing fence, and outside private houses, and inside. The main stages for furnishing the following:

For the manufacture of boxwood hedges by their own efforts, will need the following tools and materials:

Initially mark out the territory where it is planned to plant boxwood. For this you will need pegs that hammer will be installed in places where the trajectory of the fence will change. Between the pegs then stretched rope or tape. Then using the rake and hoe clean the soil from the sod and dirt under the rope. The next step is applying with the spray paint layer. From this line dig the ditch of small depth 5 ? 10 cm and a width of approximately 0.6 m throughout the territory, where the taut rope. Now you need to dig planting holes. For boxwood there are the following rule:

Only applying this rule, provided the roots the necessary space for their fast healing. In addition, a small depth of planting will provide the vertical location of the Bush.

Planting the boxwood in the hole starts with straightening the roots. You will need scissors, which you will want tangled roots to spread after Bush is out if the pot or container. Then Bush lowered into the well and filled with earth so that no pockets of air. This is achieved by watering and tamping. The base of the trunk should be at the level of the surface of the earth.

The roots straightened in order to avoid poor engraftment and disease Bush.

Planted shrubs need mulch to a height of approximately 5 cm, to avoid the loss of roots in the heat, preserve moisture and prevent weed growth. 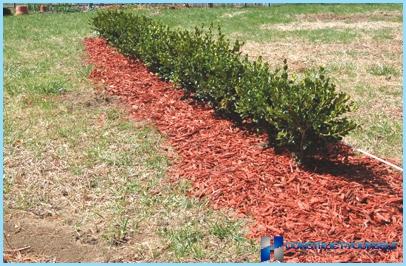 Below the fence was a well-groomed appearance, it must in the spring-summer period (may to August) to be cut with scissors or a brush cutter. This should be done every 6 weeks. In doing this you must uninstall the old branches. To form a crown can be of any shape, from rectangular to spherical and triangular.

On the territory of private ownership or in the Park you can perform the original design, highlighting places of recreation, which not only will give a special charm, but also decoration area. 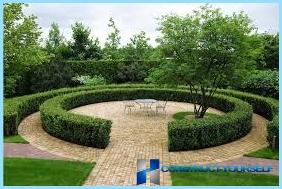 The entrance to the house, cottage or office can also be an original way to decorate a boxwood. 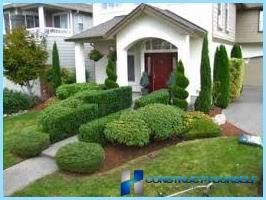 The shrub is propagated in the following ways:

The easiest method of propagation is cuttings. Branches with a length of 15 ? 20 cm in the period from April to June, immediately after harvesting, put in the ground half the length in the shade, in full sun this should not be done. Between the rows should be about 20 cm, and the distance between branches planted in row – 10 cm Earth should be well compacted and watered. Watering must be implemented daily to the land was wet constantly. Two months later, you should see small shoots which then turn into the bushes. Usually through the year or early spring, they can be transplanted to the planned landing site.

Boxwood is the perfect material for decorating hedges.