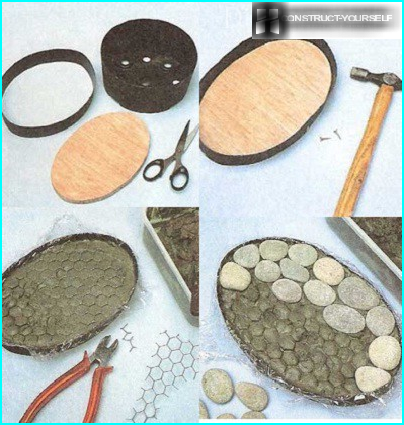 Unusual things attracted people at all times. But if amazing shapes take live trees, then past such beauty none will be indifferent. One of the jewelry trends in landscape art, you can call arborsculpture — growing trees in the form of chairs, geometric shapes, ornate ornaments and even people. But do not confuse arborsculpture with topiary and bonsai. It’s three different techniques and the difference between them – deal with specific examples. Besides the simplest forms of arborsculpture can create any cottager, who has the stomach and patience for moulding, vaccinations and care for their sculptural trees.

Arborsculpture is not a new direction. It was invented in the second half of the 19th century in America. But until that time, the trees grown in the technique of arborsculpture, meet in Europe rarely, and only in the countries of the former Soviet Union are regarded as exotic. So if you want to impress all friends and acquaintances, try to create in this technique, at least one tree. 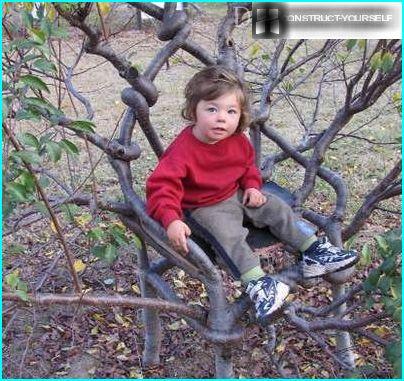 On this original chair I like to sit not only guests but also their own children, which will make it the main object for games

The essence of arborsculpture that in the process of growing plants to give it a fancy shape with curvature of the trunk, forming branches and, if necessary, vaccinations. At first glance, the technique looks like a bonsai tree, where, too, are twisted trunks. But bonsai is the art of growing miniature trees and the large signs. And in robotechnic specially Flex plant, giving it an unnatural shape.

Different forms can give the crops by using the technique of topiary. But in this case the original forms and figures obtained by the continuous shearing of leaves and thin twigs. And in arborsculpture the leaves do not touch. The task of the gardener is to transform the shape of the trunk, to bend the skeleton, until he managed to travelnet. And you can’t experiment with one seedling and combined into one ensemble 3,4 and more trees. Their trunks connecting method of grafting, and the trees themselves heal the wound, in the form tightly to each other and forming at the junction of the scars growths. 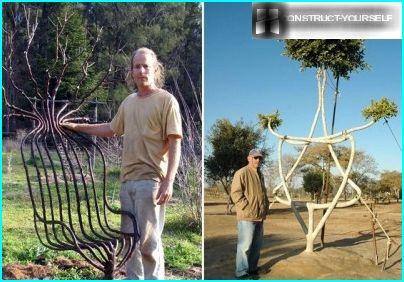 Grafting is used when creating a sculptural composition of a number of trees, and form a single plant vary with flexion of trunk and branches

What trees are suitable for arborsculpture?

To the tree endured all the trouble, which will be exposing him to the owner, it was originally supposed to be adapted to the climate of the area. So of the most common birches, rowans, maples and cherry are the easiest to create sculptural masterpieces. Fruit is also a good idea transfer molding, but yields will start to give a little later than usual: not in 4-5 years (Apple), and 7 year.

To start to learn a new technique better with the willow or plum. They both grow quickly and are well acclimatized and do not require special care. If you buy tree in the nursery, you just need to know what the edges are brought. It is better that it was grown on domestic lands.

Full list of trees which are easy to deform, can be found in encyclopedias bonsai, as this technique has gained much more popularity and accordingly more is the Internet. However, pay attention to the fact that arborsculpture need trees as bonsai expose and stunted shrubs. 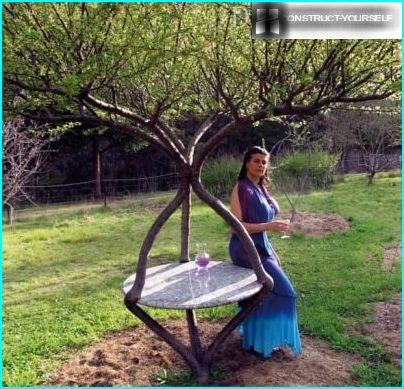 To create such a table from any of a large tree, like a Linden, a maple, or even fruit crops grafted on dwarf rootstocks

Where to start: the simplest form

The simplest option arborsculpture is tree, the trunk of which is bent zigzag. In order to obtain such a miracle, it is necessary:

Bend the stems only in the spring and summer when the tree has gone, the SAP flow. Up to this point, the seedling has no flexibility and can crack when tilted. 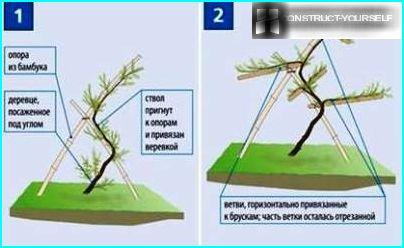 The bending angle of the barrel can be varied by using cross supports, pushing its parts away or closer to the date of fixing the tree

All the skeleton branches, which is above the first bend of the trunk, must also be formed. On the tree, leaving the strongest branches and give them a angle, hanging weights on the ends. If you need a horizontal line or exactly in the specified direction, nailed to the main support horizontal slats at the points where the branch departs from the trunk, and tied to the middle and the end of the limb.

When you see that the trunk and branches rough, steel solid, can remove the support frame. Bends the trunk, you can create so much else, changing reliance on a higher.

To fruit trees fit into the landscape, you can improve their shape, creating out of the barrel vase, flower, Cup, spiral, etc. In this way they will be decorative in any season. Make a sculptural masterpiece is easy, but will have to form a crown a few seasons.

Step 1. The creation of the frame

First, think through what shape is a tree. Recommended to start with the vase. For this welded metal frame in the shape of a vase, height and width of 2 metres and install it in the place where it is necessary to grow the sapling. The frame is a ring a meter in diameter from the bottom, from which going up of metal curved pins (6-10 pieces) with imitating the shape of a vase.

On top of all the pins are welded together with one more metallic ring with a diameter of 2 meters. Install the cap to the frame is not crooked or ass eventually. 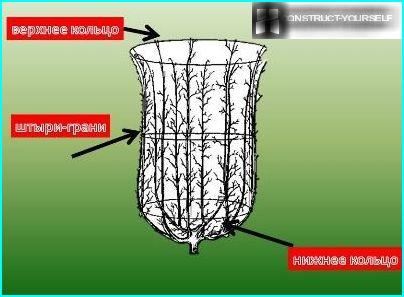 If the frame of the bowl to make the width more than 2 meters, it is desirable to insert support ring and in the middle so that the design kept the form

Step 3. Forming the base of the wood bowl

Lacking a Central conductor, i.e. the top of the tree will increase lateral shoots. Of these, leaving only the top, which should be equal to the number of pins of the metal frame. If you have a set of 10 faces, leave 5 branches, if 6 – 3. They are given the opportunity to grow. The other branches are cut at the ring.

Spent the whole summer watching the growth of main apical shoots. Below the branches had the same thickness, you can adjust the power by tilting them in different directions. If flight Hilo – straighten it vertical and fix to the frame. If too thick, stands out from the rest – horizontal bend, so as to stop the movement of juices. 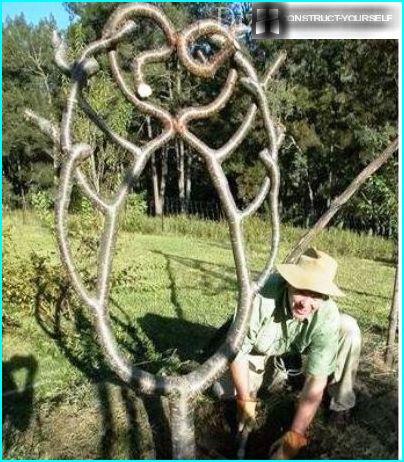 For clear follow-up of the beautiful form of the stem, all side shoots should be promptly removed, leaving the trunk completely clean, devoid of branches

Step 4. The creation of the frame of the branches

During the year the skeletal apical branches will get stronger, so spring pruning carried them deep, leaving only a small portion of two kidneys. Else – delete.

Of the two buds will grow new shoots that will become the edges of the bowl. Each shoot grows fixed to the pin frame to give it a strict vertical position. You have to follow the development of the tree pruning on the main skeletal branches side shoots. Place on each wood “faces” 3-4 escape, cutting off their tops to the level of second from the beginning of the sheet. They will begin to form fruit buds, and eventually your vase will be covered with juicy fruits.

When main branches to reach the top points of the supporting frame and travelnet, can you clean metal structure. From now on, the tree itself will keep a given shape, and you will only need to thin out superfluous shoots and restrain the growth of the tops, so as not to lose a sculptural effect.

Simply create sculptural compositions of several trees. For example, from 4 willows or birches can create stunning beauty of the spiral. And this is done simply:

When the whole spiral will close branches, and they will become thick, the wire is removed and the frame dismantled. The resulting wood spiral will certainly stand out in the landscape, evoking the envy of others. 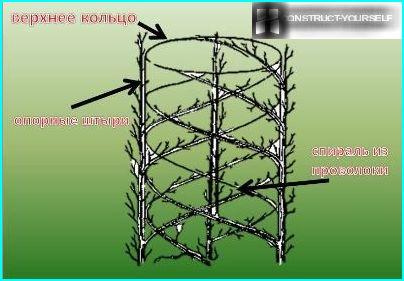 The lower support ring of the frame and can not do, if the side pins to drive deep into the ground that they are securely held

As you can tell from the instructions to become a sculptor in his own garden is quite simple: you just have to have the desire and a good welder on hand, which will make the support frames.