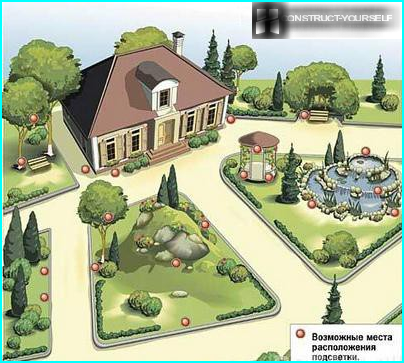 We all love animals and are touched by them in a zoo or on TV. But as soon as some kind of animal or bird begins to encroach on our own land, we declare war on him. Most often gardeners «howl» with the starlings, destroying sour and sweet cherries, and moles that have the temerity to spoil the landscape with fresh mounds of earth. Especially frustrating for owners of the damaged lawn, because it is every kratovil the perfectly visible. But if the birds decided to fight hazing without physical destruction, «the diggers» less fortunate. As a rule, the fight against moles on the site are brutal methods: keratoleukoma, poisoned baits and other methods that deprive the animal of life. It’s not too humane, because the animal was not interested in our green spaces. It damages the roots by accident, while looking for its chief prey of worms, and kill the mole because he is trying to somehow feed themselves, not ethical. Moreover, there are many effective ways to expel the animal from the area without causing him physical injuries. Here is their something we will consider in more detail.

Analysis of provisional measures of deliverance

The mole from the plot it is possible to expel for a time or forever. The second method is harder to implement, so we will consider them later. A temporary measure intended to frighten the animal or cause trouble for his acute sense of smell. Where constantly stinks or something making noise, the mole will not live.

The use of plant repellents

Some plants have sharp specific smell, which comes from the roots. Sensitive the mole prefers to avoid their planting party. The most effective are beans (especially black), Royal grouse and marigolds. 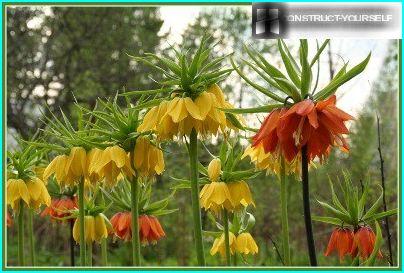 Royal grouse has gorgeous appearance, so that it will not only scare the mole, but will decorate any flower bed or region of lawn

Marigolds planted around the perimeter of the flower bed, scare off the mole and at the same time cleans the earth from the microbes, especially if the fall of them remains in the soil

If they are planted around the perimeter of the patch, then «the enemy» it does not climb. However, he did not leave the area, and only crawled to the side, but if you care to preserve the beauty of one of the beds, then these methods will be enough. For example, in the flower garden, ideal marigolds on the perimeter of the lawn – grouse, which Bud in early spring and will completely hide in the soil until the next season.

The beds can be arrange beans, but you have to put vertical props, because this plant grow inordinately tall to a height of about 2 metres. 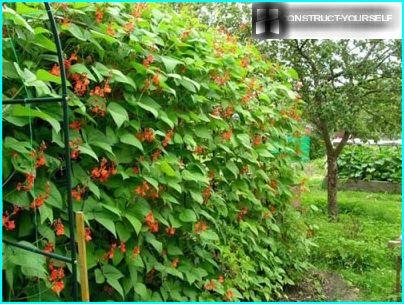 Legumes are unlikely to fit into a flower garden because the plants will Eclipse its high stalk, but in the garden they will bring many benefits

A very successful mole control is carried out using various sumalak and rattles. The mole has very sensitive hearing, which he replaces poor eyesight, and cannot stand living in such conditions (however, as we all do!).

Many gardeners make turntables from plastic bottles, which are set in motion from the wind. For example, to drive the mole in the course of the pipe, at the upper end of which is wearing a long pin. This pin «put» plastic bottle, pre-drill a hole in the bottom slightly larger than the diameter of the pin. The sides of the bottle it is necessary to cut and bend the blades to the wind for what it was «catch». It is quite a strong ratchet. 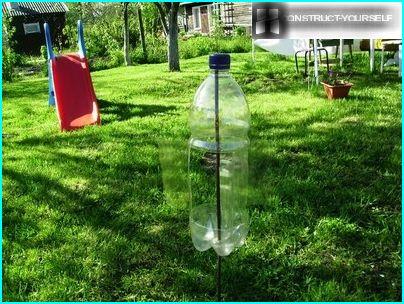 Turntables made of plastic bottles — the most popular way to scare away mole from suburban areas, however, their aesthetics are not too high

If they are to instruct around the area, during windy weather escapes not only moles, but the dog. However, not all gardeners like to tolerate the constant noise.

A good method of dealing with moles is digging into the soil bottle with a high neck. It is best to use containers of champagne. It is necessary to determine which side often blows at your farmstead wind, and dig empty bottles under the slope in the soil so that the necks are pointing straight on the windy side. Ostavlyaite above ground only 2/3 of the bottle, and bury everything else. During the wind of the bottle will start to buzz, thereby expelling the mole from their homes. This way you can protect a small space, because the entire plot container will have to collect years of or like the neighbours. 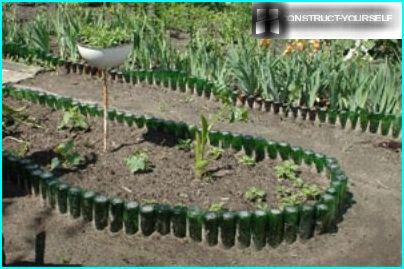 So decorate the bottles of champagne flower beds, and if they turn over and dig under the slope, the curb will protect the flowers from the mole

If you do not want any tinkering, the struggle with the moles in the country may be ready the tools available in stores. These include electronic scarers. They work on batteries or solar energy and are a thick stick, which digged in the earth sharp end almost 2/3 of the instrument.

Laid into 3-4 batteries, which is enough for the summer season (in «solar» appliances energy is absorbed during the day). Buried in the ground scarers emit a subtle vibration and unpleasant sound which is almost inaudible on the surface, but applies perfectly under the ground. However, over time, the device begins to run quieter, and if it is not sealed from moisture, the contacts are rapidly oxidized. 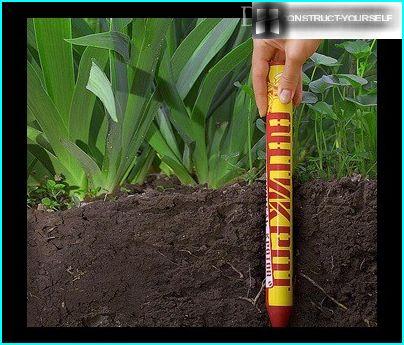 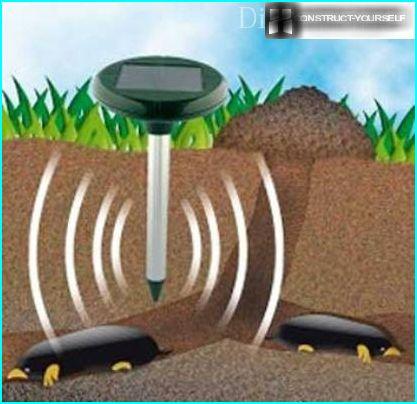 In addition to temporary ways of dealing with moles, there are more reliable after which the animal will never be able to visit. But this work is not for one day. The basic meaning of the struggle – to put around the perimeter of the blockade, through which the mole will not penetrate. And as the animal rarely buries itself into the ground more than a meter, it is of such depth and need to dig a trench. It’s a long time. But now! Ready the trench is filled with sheets of slate, metal mesh, stones and other hard material, samples of which animal will not be able. This layer should reach the surface of the earth and only slightly covered with soil. It is especially convenient to create a barrier at the time of fence installation. For example, for concrete fences is filled with Foundation, though not at this depth. But you can dig even deeper and to be safe from uninvited guests!

It should be remembered that not every mole is a struggle in the garden will end your victory. There are animals that are not afraid of no harsh odors, no noise. And then you have to catch them krotonovoj, and for «aliens» to build underground blockade.