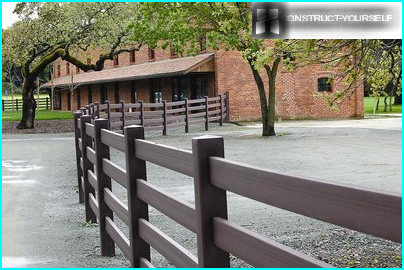 Paintings of famous artists are highly valued, but the completeness of any canvas attached to her frame. How the frame fits the picture, depends the overall impression of the artwork. Border flowers create the unique frame surrounding flowerbeds, walkways, garden beds in the gardens of geometrical planning. However, in natural style gardens are generally not used curbs. As fencing can be used bricks, tapes, or fences. It’s a matter of taste. But the use of flowers where appropriate, always impressive.

Many of the principles of creating borders appeared due to the famous English gardener and landscape designer Gertrude Jekyll. Her own garden in Manstad wood was struck by the artful flower beds. Still her work is considered a model of skill and impeccable artistic taste. 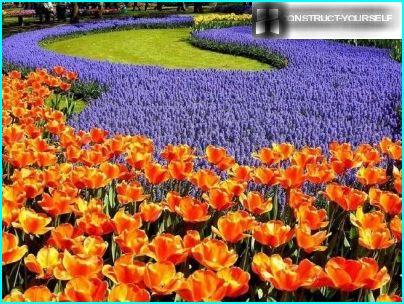 Gertrude Jekyll believed that the contrast necessary to enhance the harmony, but the use of a neutral color, which is white or silver is also acceptable

To a flower border was functional and attractive, it is necessary for his creation to follow some rules:

Based on the above, it becomes clear that the choice of plants for planting in borders is the key to creating a quality curb. 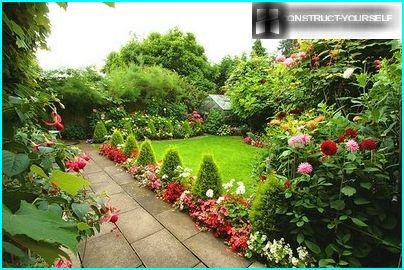 Flowers for fences are always dangerously close to the feet and lawn mowers, so fast recoverability of plants – here is another principle on which they should be

Annual plants in the composition of the floral edging

Annual plants live a short but bright life. In early spring, their seeds are sown to obtain seedlings. In the summer they turn into blooming flowers, and autumn fade. Each year, the edging of a border of colors of annuals will have to be renewed. But this deficiency only, and it is fully compensated by the advantages of a border of annual flowers.

Such plants, even purchased in the form of seedlings, inexpensive cost, and are blooming very nicely. Even in the fact of their annual updates is hiding the positive: you can create beautiful combinations of plants. Below we present you a small list of the best varieties.

Marigolds. Among the many varieties of these plants it is necessary to give preference to low-growing border flowers. Marigolds bloom from June until the frosts. There are varieties of marigolds with double and simple flowers. A little shade does not interfere with their growth and flowering. Planted seedlings of marigolds in the middle of may. 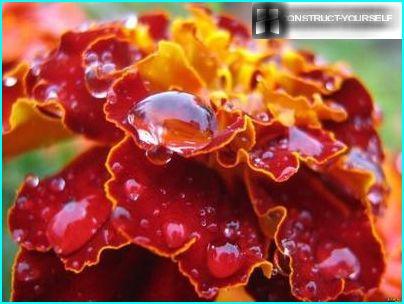 Marigolds never look too simple: plants are diverse, attractive and not boring: there are both simple and double varieties

Nasturtium. This plant loves heat and light. Early planted nasturtiums can freeze. Transplanting nasturtium’t stand, so need to grow it in peat pots. If the plant is a little light, it may cease to bloom and grow. Moderately fertile and moist soil – ideal for nasturtiums.

Nasturtiums decorate the plot and as border color, and in hanging baskets, and even in decorative pots placed along the path

Verbena. It is important not to make a mistake and choose low-growing plants. The seeds of marigolds in April, already planted in the ground, if you cover the top with foil. It is drought tolerant and light demanding plant does not tolerate excess watering. 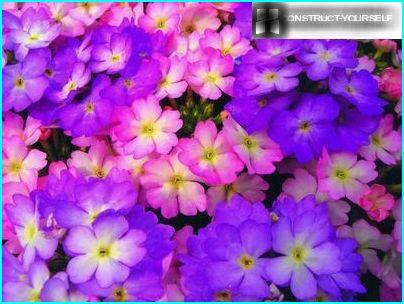 With marigolds and marigolds marigolds can be in the Union, and to rudbekii and gelenium create sharp contrast

Ageratum. Among annual flowers with such amazing blue color is very rare. To the seedlings of this plant were healthy, you need to drop her off closer to the end of March or in early April. Ageratum blooms in June, and fades only to Sep. 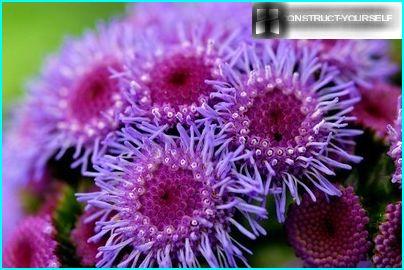 It is important not to plant the plant in the shade and not periodoral the soil, and that isn’t enough of the blossom, grew the ageratum can be cut

Iberis. In March-April, seeds can be sown in the ground. Only need to place them immediately at some distance from each other, because when transplanting the plant often suffers. 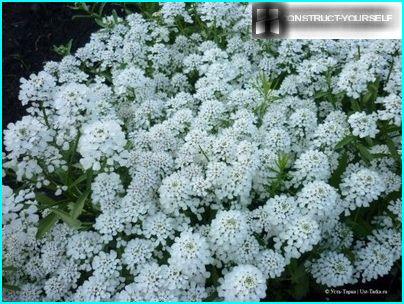 Lobelia. This plant loves the sun. Her pink or blue flowers bloom in June and abundant blooms until frost. Seedlings of these plants should be placed under glass. 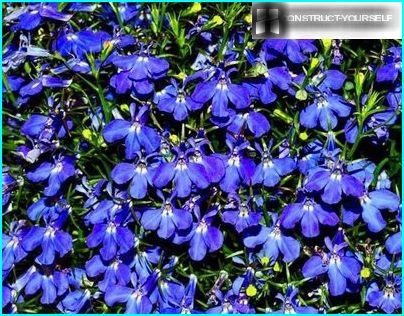 Look at those flowers and think, would you like to have in your garden attended this amazing Royal blue color

Cineraria. Undemanding and unpretentious cineraria looks amazing, but very sensitive to waterlogged soil. In the shadow of the beautiful silver color of the plants can turn into ash-gray. Propagated plant seeds. 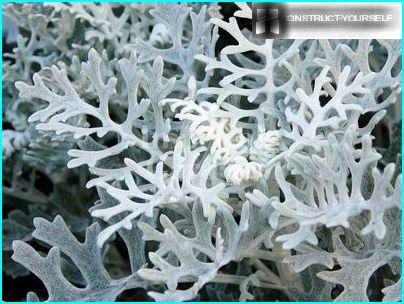 This magnificent plant silent like coral, and like coral on the bottom of the sea, has a strong attractive power

Alyssum. Sown in early spring directly into the soil under the film alyssum will bloom after 1.5 months after germination. Loves cool weather, exudes a delicate scent that attracts butterflies and bees. 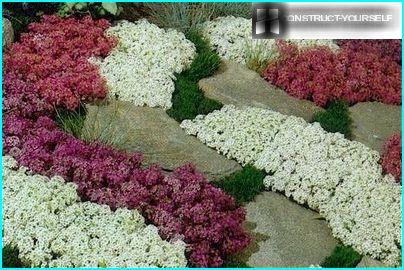 The gentle fragrance of this plant is able to lure him bees and butterflies, while fragile insecurity of flowers attracts people’s attention

To represent the many annuals that are perfect for borders, just not enough space.

Perennials – a worthy setting for any flower beds

Border perennial flowers are called plants, which allow its upper herbaceous part of the die with the onset of cold weather, while their roots just fall asleep until then. Spring is a time to Wake up and roots grow new shoots below the flowering did not stop for many years.

Chives. Otherwise, this plant is called scored. This bulbous plant that quickly multiplies. In the spring you plant just one onion, and by the autumn she’ll make a valuable bundle of onions. 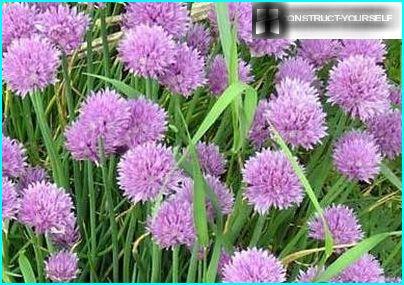 The sun, rich in lime soil and moderate watering are the main priorities of this plant, chives can be used in food

Arabis. It is a melliferous plant can produce flowers in white, pink, red, purple or pink. It all depends on its grade. Small flowers can even be Terry. 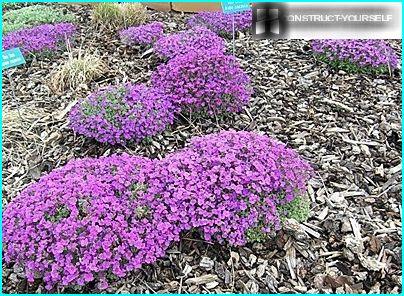 Collected in the brush, Arabica flowers appear in April and remain in excellent condition until 8 weeks, arabis can significantly grow

Geum. The plant replicates well both seeds and vegetatively. The large flowers are rich in nectar, are very decorative and attractive. Planted in the soil of seeds of Geum are able to hatch in the autumn, but usually mass germination is only the following spring. Geum is also valued as a medicinal plant, but beautiful, and just as a curb of a flower. Geum forms a socket for the new year, flowering right under the snow. 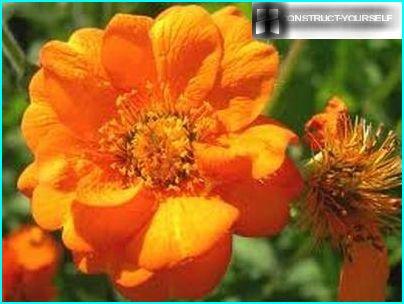 Geum is also valued as a medicinal plant, but beautiful, and just as a border flower, it forms the outlet for the new year, flowering right under the snow

Sedums. These light-loving plants are able to sustain only slight shading. Bright and succulent sedums in the shadows are totally not like yourself. They can even lose their shape. But the sun can give this plant a real tan or a special glow. However, pobedonosnaya stonecrop, for example, does not tolerate direct sun and tolerates shade. In one place sedums can grow about five years.

Ajuga. This species of evergreen low-growing border perennials flowers a carpet covers the ground. Is characterized by endurance and ruggedness. Repucci leaves are a dark green and even purple. The shade may depend on weather conditions and time of year. 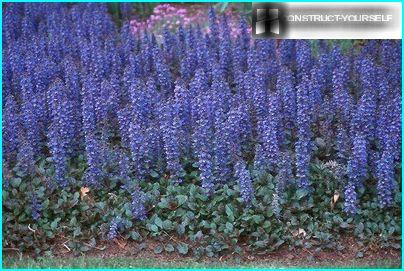 Blooms Ajuga blue flowers at the same time with iris and Japanese spirea, this plant is often used not only for borders but for the rocky hills

Feverfew. This plant is remarkable in numerous colors that are very similar to chamomile. Multiply pyrethrum better seeds. Sow them in the greenhouse conditions in March. 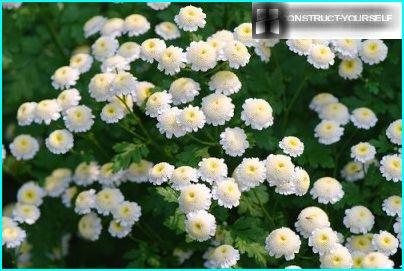 The plant must be subjected to Petrovka, and in June the seedlings already planted in open ground. The Golden color of the leaves of feverfew will remain only in terms of the placement of plantings on the Sunny side

If someone thought that this list is at least one-third provided all the plants used for borders, he was wrong. Curb plants remarkable is the fact that the list is inexhaustible. One can create amazing tapes, as did Gertrude Jekyll, forming a play of colors and shades influenced by the impressionist artists.