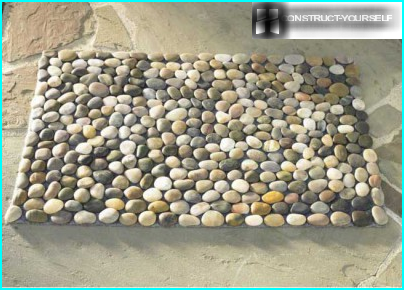 Who divided all plants into useful and harmful (i.e., weeds)? Most likely, the cottagers, who were not satisfied that the individual «green comrades» do not obey the master’s will, and grow where they were not invited. But the nature is absolutely useless plants do not exist, and the pernicious weed, which we from year to year finish off on your own raised beds, you can benefit from. «Sterile» the gardens are now out of fashion, because many owners have learned, what benefits the weeds, truck crops, and try to use the riot of vegetation to their advantage. Let’s deal with what weeds is to continue the struggle, and who, in moderation, it is advisable to leave in the beds.

Harm or benefit: what more weed?

When gardeners go to war with weeds, their only desire is a complete capitulation to the green enemy and eradicate it from our own garden. But the problem is that weed seeds in the soil – millions, and they remain viable for many decades. So that instead of weed come new grass awakened by the stirring of the soil. And wakes the man himself, drawing a hoeing and weeding.

If the vacationer to ask, what is the harm weeds cause, the first thing he’ll say, inhibit the growth of cultivated plants. This fact is indeed the case, but only at the stage of germination of vegetables, when the sprouts are sickly and not gaining strength. In the fight for the sun and light weeds can displace a weaker condition. But when those same tomatoes or peppers scored thick and grew so that they had to tie up, no the weeds did not choke.

In the potato beds the worst enemy is the couch. It not only hinders the development of potatoes, but tubers and gnaws its roots, taking from them food for themselves. Wheatgrass is able to lift the concrete pavement, breaking through the cracks to spoil mezhplitochny seams on the tracks, etc. and choose among all the harmful weeds, then the palm should be given to him. With Wheatgrass it is impossible to agree and we must wage a merciless struggle. On large fields, this herb is being destroyed by herbicides and continuous tillage (disking, harrowing, etc.), and in the flower beds the only option is to erase from the earth the roots to hold the mulching. But not sawdust or bark, but first cover the ground with black spunbond, which will block the weed to sunlight, and pour on top of some decorative material. And this coating is not removed a couple of years. 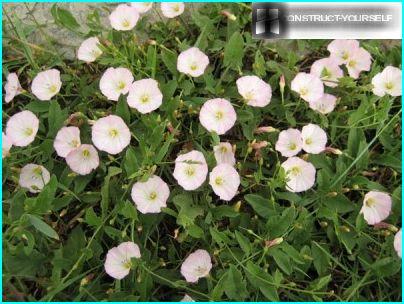 If the bindweed, or the people’s birch, is out of control, destroy it with kerosene, which is not detrimental to truck crops

All the other weeds – dandelions, nettles, chamomile, ground, tansy, the wood louse, etc. – can and should be used to improve the growth of vegetable crops.

What is the use of weeds for gardeners?

Outset that everything is good in moderation. Therefore, the benefits of weeds can only speak when their number is constrained within certain limits, is not allowed uncontrolled contamination and clogging of the beds. 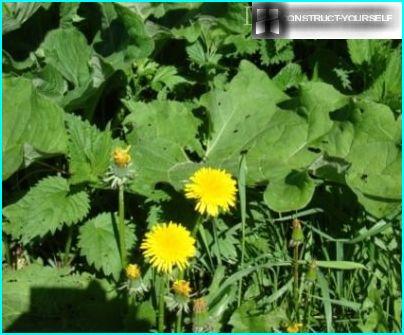 In such thickets of weeds the garden, of course, will not survive, but how many green manures can be obtained if all of this is to cut and grind

Weeds honking about the shortcomings of the soil. Each weed their needs to the acidity of the soil and its mineral composition. Therefore, plants that annually breed in your area and not going to leave, you can understand what is missing in your soil:

Weeds help the plant growth. Botanists have long noticed that some of the growing plants can influence each other positively. In the process of growing they release volatile, is removed through the pores of enzymes and ions that are washed by rain into the soil and into the roots of other cultures, increasing their immunity and resistance to diseases. 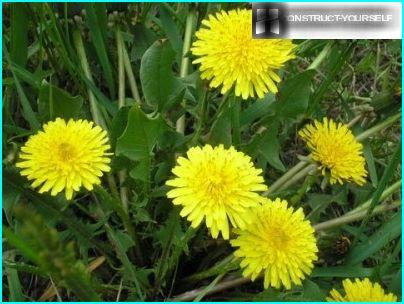 Cut the dandelion to create a mulch carried out, while the flower buds not yet opened, otherwise they ripen in the garden and will spread out over all the garden beds

So, cucumber dandelions in the garden beds that contribute to the accelerated ripening of fruits, because during flowering, emit a special gas – ethylene. If the aerial part of the dandelion is cut and shredded for mulch, the soil will have almost the whole set of mineral elements.

Umbrella culture that nazivayetsya samasem (dill, caraway), and wormwood repel insect pests. It is useful to leave them in the unloading circles of trees, among the cabbages, that butterflies-butterflies did not spoil the vegetable. But nettles don’t miss the garden of slugs and snails. 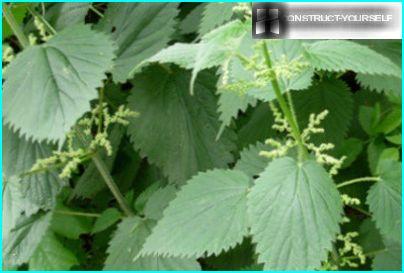 Nettles growing in the cabbage beds or among the bushes of strawberries, will be a major blockade for snails and slugs, particularly humid summers

The weeds are protected from the scorching sun. Many cultures during the hot summer experiencing severe stress, especially if gardeners do not manage their time to water. Most suffer gourds: squash, pumpkins and cucumbers are the same, because the wide leaves evaporate moisture at an accelerated rate. If it is this coming season, it is necessary to leave these beds napoletani. Weeds growth is higher than the creeping culture, therefore, will create the necessary shade. But the current version that if not to weed the tomatoes, the weeds will protect the fruit from fog — wrong. Tomatoes late blight is striking not because of the fog, but because of the high humidity, lack of ventilation between the bushes. And if not for the weeding, the air just can’t circulate through the garden. Accordingly, the tomatoes will start to hurt more often. 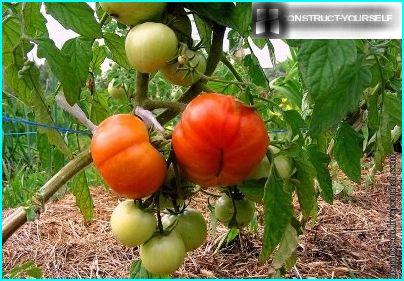 Tomatoes require good ventilation of the bushes, so they weed out carefully and don’t mulch with green mass, to avoid excessive evaporation

The use of weeds for the enrichment of the soil

All the weeds that have been compressed before the seeds ripen, are excellent eco-friendly fertilizer. They lay in the compost, mulch the beds, paths. Many plants can be infused and used as foliar sprays. Such spraying at the same time and kill aphids, and enrich the culture of useful elements.

Interesting method of application of weed came up with the Kaliningrad vacationers. They mow all of the harmful vegetation, grind it, mix with lawn grass and laid out in rows on ploughed the garden, where in spring it is planned to plant potatoes. Layer at least 30 cm With the arrival of spring any more excavation work is not carried out. And seed potatoes are simply placed under the mulch and expected crop emergence. The tubers rotting in the grass heat, they do not attack the Colorado potato beetle, which discourages the smell of decaying plant residues. Weeding these beds is not necessary, only on the sides to hold the soil, to raise the ranks. The yield is a little lower than normal when the potato grows in the ground, but care – at least.

If you approach the weeds from the mind, that the harm caused by them, you can wrap to your advantage and to achieve greater yield without the use of chemical fertilizers.