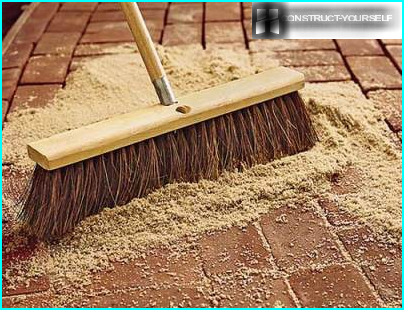 Gardeners know that the garden is not only a superb base for growing vegetables and berries, but the present battle with weeds, which with regular perseverance is the best position. To stubborn parasitic plants do not appear among the seedlings, taking away the moisture, the useful minerals and sunlight, you should choose the right tool from weeds, which will not damage useful crops.

With the beginning of the first cultivation of vegetable crops, mankind is faced with weeds that harm all the world, and developed much more successful than their cultivated brethren. A problem appeared and the first methods of combating harmful plants, different in their purpose and execution.

This is perhaps the most simple and usual method, despite its complexity. The main feature of the weeding – regularity, and hence, the constant reference to the garden. Vigorous waving a hoe, and even handling the mower will not yield results if at least two weeks to forget about weeding, besides the effectiveness of the minimum. Such backyard regulars as oat grass and wheat grass, tenaciously cling to the soil with its rhizomes, which spread around and form a veritable carpet. Removal of the rhizomes does not deprive plants of life, but only promotes their rapid reproduction.

There is a small peasant trick: replace the hoe (a shovel) on the fork, not cut parts of the plant, and rip them out of the land entirely. After this you need to collect roots and aboveground parts and allocate them away from the garden. I would like to note that this procedure takes a lot of time and effort, and after a couple weeks the weeds will once again zakolebalsya among the greenery and strawberries. If you dream to achieve a perfectly clean soil cover without a single parasite, prepare to weed control in the garden is a daily activity. 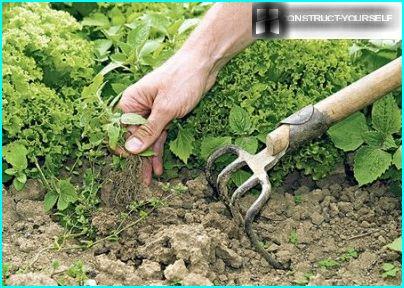 Using for weeding instead of hoes or shovels, small forks, you can not only free the soil of weeds, but at the same time to loosen it 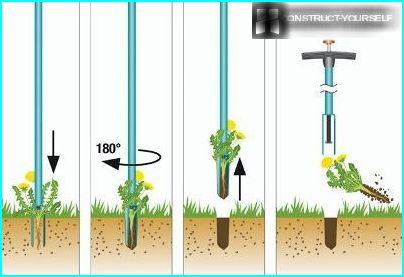 To weed the patch along with the traditional instruments used by the extractor of weeds. To remove the plant, it is sufficient to load the extractor into the soil and rotate 180 degrees

The method of purification of soil from weeds is simple: you should cover the desired area of the earth opaque airtight material for 3 or 4 weeks, after which it can be removed. No plant will withstand such conditions, and the roots, the beginnings of stems and leaves will naturally die off, then they are easy to remove with an ordinary rake. 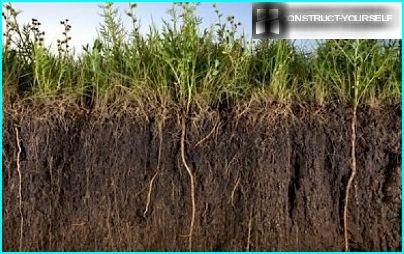 Some weeds have tap roots that go far into the depths. Sometimes the length of rhizomes and their processes reaches 1 m and more

The peculiarity of this method is that weed control needs to occur before sowing or planting of vegetable and fruit crops that is required to produce as early as possible. In the middle lane is the best time to the covered work recognized by March. Pleasant exception is strawberries, which can quite safely coexist with black film. The beds close completely, leaving the nest for berry bushes. In the end, the film also performs a number of functions: 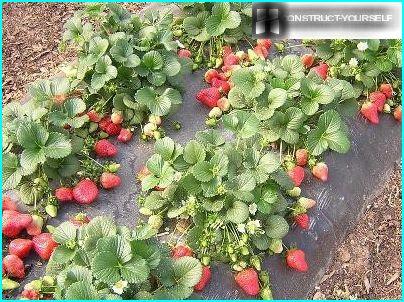 The use of black film from weed dramatically increases the yield of strawberry. Sweet and juicy the berries do not touch the ground, therefore, remain intact and healthy

Pretty interesting system targeted precision irrigation not only saves water, but also feeds only need vegetables. The water flowing from the water supply or large, raised above ground tank moving through pipes and hoses, and then seeps through the small holes, pierced in places of landing of vegetables. The essence of irrigation is to saturate with moisture only in useful plants, without giving a chance to the growth of weeds. 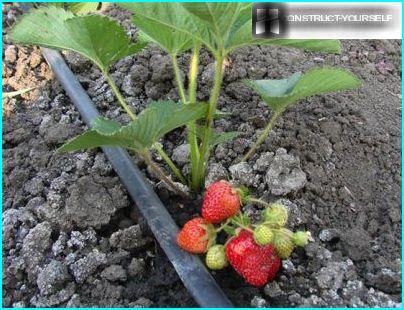 With drip irrigation, all the moisture goes to the plant for which it is intended. Dry earth around crops as a guarantee of protection from weeds and pests

Drip irrigation is effectively used in open field and in greenhouses, where the plants-the parasites are multiplying with great speed. Of course, to avoid the additional weeding will fail, but the number of weeds at metered spot watering will be reduced several times.

Read more in the articles: the Principles of the device of automatic irrigation systems of the drip irrigation System in the greenhouse: an example of a device with their hands

Mulching is used quite a long time, and to create a mulch – ground mass – is used quite different natural and artificial materials:

A layer of finely ground material with thickness 6-7 cm thick carpet placed around vegetable crops. It is breathable, retains moisture, keeps proper temperature for optimum root growth, at the same time serves as an effective barrier for weeds in the garden. 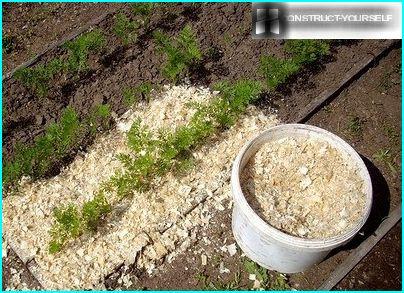 Biological or artificial mixture for mulching spread evenly across the garden, leaving the plants for arbitrary nests, given their size and growth rate

Putting mulch on the soil, it is necessary to observe some rules. If plants are planted in the autumn, the protective ground must be added directly after landing. In early spring, before using the mulch should be checked whether well-warmed earth. If weeds have already started growing, the soil should be thoroughly weeded and then put a thick layer of the crushed mass, up to 18 cm.

Article topic: How to prepare the bark for mulching flower beds?

A chemical attack on the weeds

Weed army has plenty of warriors: wild oat and chamomile, couch grass and sorrel, tansy and nettle, St. John’s wort and a series. But none of these plants can resist aggressive chemical exposure – herbicide applications.

There are a number of means so-called systemic effects. These include «Tornado», «Roundup», «Graud Bio». They are applied to the visible surfaces of the plant – leaves, stem, inflorescence. The poisonous composition is absorbed by the pores of the herbs and gradually accumulated in their roots. A big plus of these funds – absolute safety for the surrounding soil. The land is not contaminated, so after the herbicidal treatment can be safely planted crops. The period of exposure to pesticides depends on their composition and the extent of resistance of weeds, usually 2 weeks to fully clear the area. 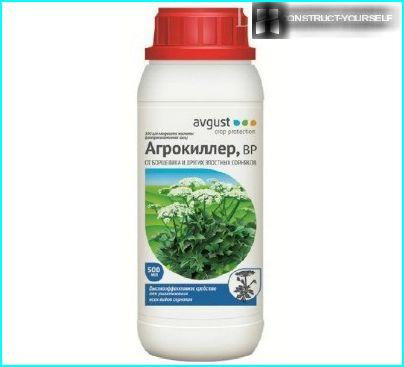 «Errokiller» equally well destroys not only annuals and perennials but also shrubs and woody shoots. It can be used to effectively deal with dangerous and tenacious species, able to cause extensive burns 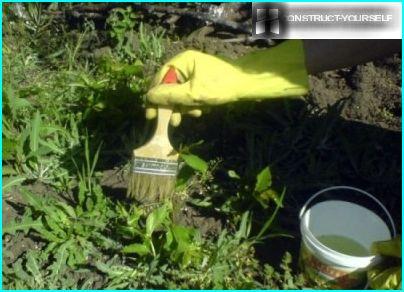 To avoid damage to vegetable crops or berry bushes, for the application of herbicides on weeds use the simplest tool – an ordinary paint brush

The most important rule for herbicide use – a neat and precise application, their only harmful flowers and herbs as poisonous substance equally effectively kills any plants, including berry bushes and vegetable crops. Because of the total destruction of all living things, the optimal use of herbicides is their spray in areas far from the flower beds but also in need of cleaning: thickets along the fence, the grass nests in the furrows, bushes, burdock and thistles on the edges of garden paths.

Consider in more detail the two tools. «Roundup» is a versatile herbicide used to get rid completely from any plants. It has no soil activity, so is used to start sowing of vegetable crops. If you act according to the instructions, the tool is absolutely safe for humans, animals and the environment. Capacity of 1 litre, which is enough for 20m ?, is 1250 rubles. 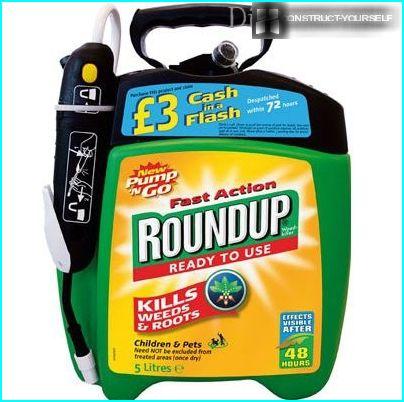 Often large tanks with herbicides continuous action (e.g., «Roundup») is equipped with a small pump with a hose, which add to the process of convenience and speed

The second popular way – «Tornado». On-site vegetable garden, it is recommended to use against these weed grasses, like cattail, couch grass, bindweed, Thistle, a grass, a cane. After application, after about 8-10 days, the plants begin to turn yellow, wither, and after 2.5-3 weeks they finally die. After about 3-4 days on treated soil to plant vegetables and berries. The capacity of 1 liter is 900 rubles. 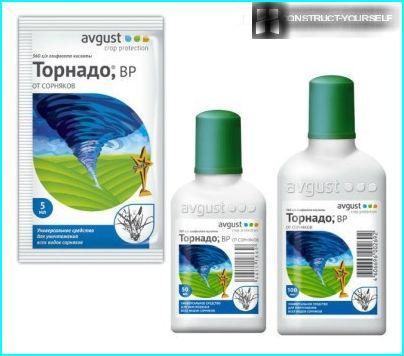 Herbicide «Tornado» safe for animals and bees, but is a poison for fish. Using it, avoid contact of the solution with the mucous membrane of the eyes

Learning how to deal with weeds through various methods and means, it is possible to increase the yield and to turn a semi-wild garden overgrown in exemplary plot.