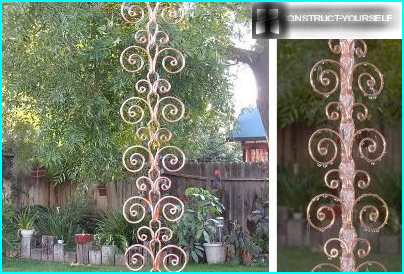 A standard of six acres, which in the recent past was a country station for most gardeners of our country, it is difficult to fill in different fruit plants so as not to have to undermine one’s own imagination. Up very little space. Given the fact that the area will be posted and some buildings, it becomes very sad. It turns out that option may be grafting fruit trees. Having developed a certain skill in the right performance of this simple operation, you can decorate your garden with apples or pears on the branches which will grow fruits of different kinds. With the best methods of grafting fruit trees we will now introduce.

First is to familiarize yourself with the basic concepts that will be applied when we talk about the technology of vaccinations:

Rootstock and Scion must be compatible. Otherwise, healing may not occur. Usually pick plants in a Botanical kinship. It is impossible for birch to instill a pear. It will fit forest pear or quince, if you think the creation of dwarf varieties. However, pears on separate branches which apples, are very common. 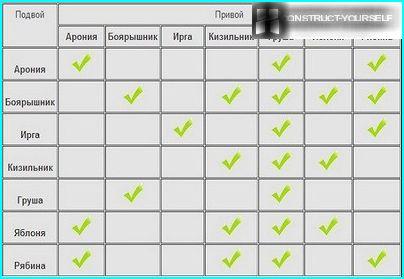 For vaccination it is important to choose the right time. Active movement of juices in the plant helps to settle down the Scion, so spring or summer is the best time for such work.

There are several methods of grafting fruit trees, which is extensively used in horticulture:

As a rule, for the budding choose summer and spring periods, and to work with cutting best is still spring.

When the budding Scion is a Bud varietal plants. Of the stages of awakening it is, depends on the optimal duration of budding. 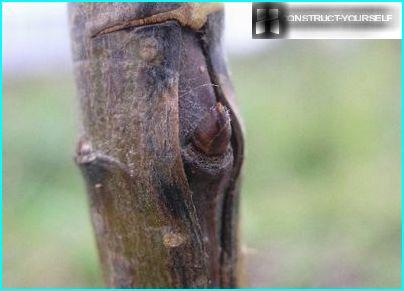 The result of grafting a Bud (eye) is visible on this picture: in the spring this Bud will become active, and the new branch will have all the hallmarks of grafted varieties

For the awakening of the kidneys the best time is the beginning of SAP flow in the spring. To Bodvou also strict requirements: the plants should be elastic and soft bark. When you use sleeping kidneys best time of the work is the second half of the summer.

Around plants of the rootstock needs two weeks well loosen the soil and remove weeds. Watering the tree as needed. Do not need to be vaccinated on the South side of the trunk of the plant, because the Bud can dry out under the influence of the sun, and not having time to really settle down.

With the handle remove the kidney. For this to work we need a sharp knife. Badly sharpened tool can damage the inoculum to bring it into complete disrepair. Together with the kidney cut the flap is a small area of the cortex. Wood while trying to capture as much as possible. If done in summer, above the kidney and below the 1.5-2 cm incision is made, after which she cut from left to right. If it happens in the spring, the bottom flap makes sense to do long 1-1,5 cm.

There is nothing supernatural in this work are not; over time, having a skill you will carry it virtually automatic

Preparing rootstock for what I’m going to cut it the crust and part of it is detachable. In the spring make it very easy. The incision should be in the form of letters «T». Turn down the corners and get the pocket, which size should be the same as the Scion. If the visor is too big, cut it. The kidney is inserted in the formed pocket precise motion from top to bottom. Do this gently, holding the Scion for the top honor flap. Fix the position of the kidneys by tying from the film.

If the budding of fruit trees was conducted in the spring, then after 15 days, the kidney needs to germinate. This fact certifies the positive result of this work. Remove the trim, carefully slitting it across the coils. In the case of summer budding to wait for the germination of the buds will have until next spring.

Grafting cuttings of fruit trees is used in cases when:

When using the cutting work is also conducted in different ways: in the splitting, topolyovka in polurama for cortex, lateral incision, etc…

For grafting fruit trees in this way, the cuttings and branches of rootstock to choose the same thickness. In the simple topolyovka on the branch of the rootstock and on the handle make oblique cuts in a length of about 3 cm, we Impose a cut of the cutting on the cut of the rootstock and the point of connection fixing film or tape. The upper part of the slice lubricates garden pitch. This work is done in early spring, and the result it will be possible to speak of a month in 2-2,5 when there will be a merging of the rootstock with Scion. 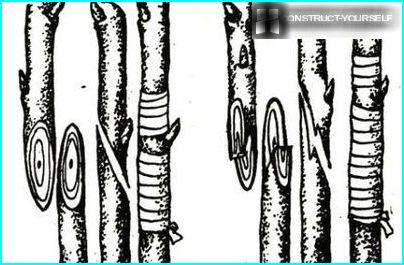 The picture is perfectly clear than a simple topolyovka different from the superior: in the second case, a large area of contact will allow the plants to actively grow together

For improved topolyovka create an additional surface for fusion plants. The cut-off at both plants do not smooth, but in the form of lightning. This forms a kind of zigzag lock at the connection, which ensures a better fit. 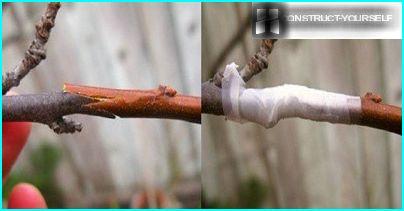 Scheme scheme, but the picture is always better conveys all the specifics of the work. Well, make sure that there is nothing difficult in it

Using the side of the cut

On the side of the rootstock is cut to a depth so that the opposite side was roughly 3 cm. Cut a length of 4-5 cm In the lower part of the stalk, make the cut thus to form a dihedral wedge. Insert the wedge into the split on the rootstock. Its wide side must match with the outer surface of the branch. Firmly fix the position of the cutting. 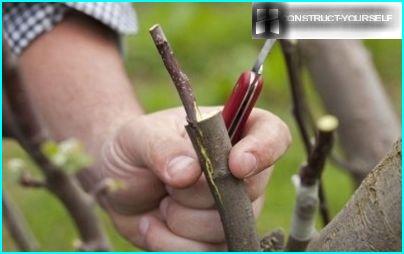 By grafting lateral slit in the Scion rootstock is included in a kind of wedge, and it is important that the surface of the cortex coincided with the bark of branches; In this position, and they need to fix

When the rootstock is much thicker

When the thick stock used for inoculation the bark. On the lower part of the cutting, make a cut at an angle of 30 degrees. The bark on the rootstock is cut, after which the formed pocket insert cutting. However, the bark is just what you can and can’t cut. To do this, carefully bandage the rootstock below the bark is not torn in the process. Then gently separate the bark from the trunk. It is better to apply for kopulirovka knife, which has for this purpose a special bone. In the pocket affixed to the shaft, fix the film vaccinated, and it lubricates garden pitch.

By grafting the bark surface bark can be nadsech, but you can just gradually pull, previously well strengthening it to not broken

For this purpose it is best suited perepelica grown fruit trees produced in the split. From the target plants of the rootstock leave about 10-30 cm skeletal branches he cut down. At stumps we perform a longitudinal rassay a depth of about 5 cm If the branch is thick, then it can be placed even two cuttings of the Scion. For thin branches suitable polurama (not through). The cuttings are cut so as to form «shoulders» (straight cliffs), which will rely on surface hemp. The split was Packed clay, and the top of the stalk and hemp smeared garden pitch. The site of inoculation record. 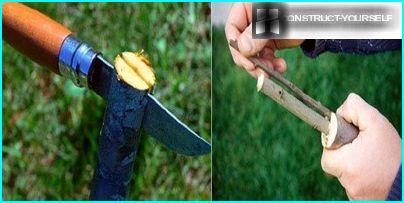 Vaccination in the splitting is most often used to create a new plant variety, if the old something did not suit the owner of the garden

The list of options is not complete. With the development of gardening, we learn about other opportunities.