The cotoneaster is a shrub, which is quite slow growing and has dark green, shiny leaves. It grows well in Europe and Asia. There are evergreen and deciduous cotoneaster.

It is extremely hardy to climatic conditions, so often used for decorative purposes, as ornaments to the plot and as hedges. In addition, fine branches and quite long-lived, well tolerates polluted air and urban dust.

It is important! Almost all types of cotoneaster are inedible, but some fruits can be eaten.

To evaluate the aesthetics of the hedge of cotoneaster brilliant, you can use this photo: 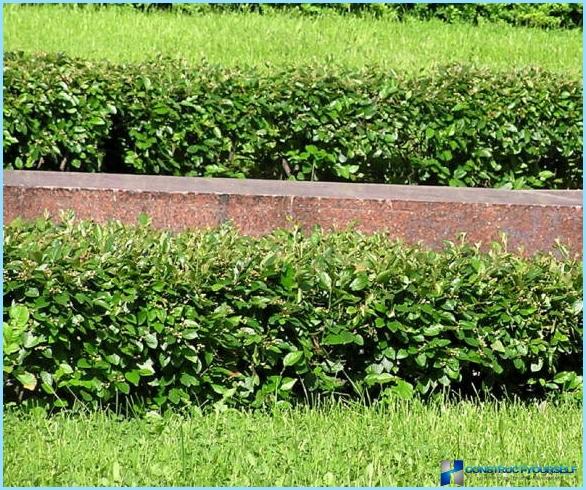 Today, there are about 80 species of cotoneaster. They can be both erect and prostrate. Grow well mainly in southern areas, however, some specially bred for growing in the North. Highest quality hedge is obtained in lustrous, horizontal and Aronia.

Brilliant for the cotoneaster hedge is a deciduous plant and likes a Sunny location, but it normally grows in the shade. To us he came from Eastern Siberia. Hedges are made of it due to the peculiarities of its growth: it is erect and can reach a height of about two meters. In autumn it has beautiful coloring, as in this period the leaves turn red. He blooms in late may. A photo of the hedge of cotoneaster in this period differs extraordinary beauty: 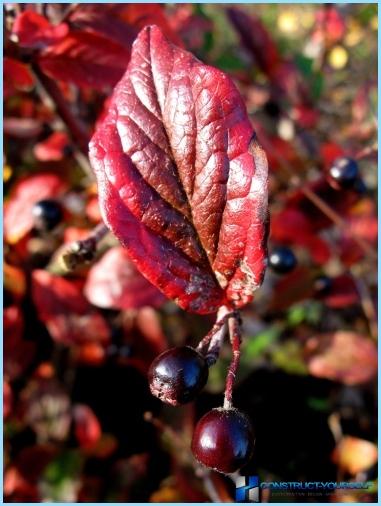 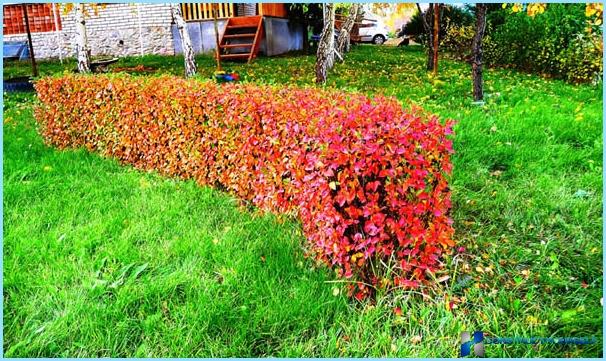 It is important! The shiny cotoneaster is an excellent honey plant.

Inflorescence encouraging greater abundance of flowers during flowering. They are often from four to twelve pieces.

How to plant cotoneaster brilliant for hedges? ↑

Before planting cotoneaster brilliant need to make sure that the hedge will be in places with full coverage. To soil fertility it is undemanding, but it is worth considering that the optimal composition of the soil is: peat compost, loam and sand in the ratio 1:2:2.

It propagated by layering and by seed. Use of cuttings is not recommended because of low efficiency. For planting hedges of cotoneaster is recommended to take the seedlings with root ball, which is already a bit grown up. The landing is made at a distance of 1-2 m. These shrubs are much branched enough, so seedlings will need not so much. For maximum effect, in terms of density is necessary to make a landing in a checkerboard pattern.

Planting of cotoneaster for hedges require additional preparation. The hole needs to be done quite deep – about half a meter, because radical neck you want to hide under the ground. At the bottom you need to place the drain and then backfill with a mixture of peat, sand and loam.

It is important! The optimal size of the hole should be twice larger than the root ball. This is done in order not to damage it when planting.

If the plant without coma, the roots need to spread in the hole so that they are bent up. Then you need to fill them with earth and thoroughly compacted the soil around seedlings. In the end you need to carefully watered all the seedlings.

How to care for a cotoneaster? ↑

The good news is that hedges of cotoneaster brilliant no need for frequent watering. The plant is very unpretentious and during the first years after planting it is enough only 1 watering 2 weeks. The only situation in which watering is frequency – hot summer. Then watering is done once a week. After watering you need to aerate the soil or to produce mulching.

It is important! If the region’s harsh climatic conditions, particularly extreme cold, as the insurance in the first year need to cover the plant with burlap.

In the spring it is necessary to produce fertilizer cotoneaster mineral fertilizers. The most frequently applied urea. Her dosage is very easy to measure: just one spoon in a bucket of water. Also in late spring you need one more time to fertilize the shrubs using potassium sulfate (10 g) and granulated superphosphate (60 g). This dose is calculated for each meter of land, on which grows a shrub.

It is equally important to keep the soil clean all the time. Dead leaves and the weeds must be removed from the soil.

How is trimming the bushes? ↑

The right hedges of cotoneaster brilliant from the point of view of geometry show all its elegance on the photo:

But in order to produce a neat hedge and implement pan under trim figure, you must use the hedge trimmer and the rope you need to pull tight. You can also use the template from the tree.

To make the frame of the pattern you want to use the bars, skolachivaya them in the form of a trapezoid in which the lower part will be 10-15 cm wider than the top. The choice of form depends on the height of the fence and its purpose. Before cutting between the frames of the stretched rope, which will be adjusted surface of the cutting scissors. However, if the workload is very large, you should use a special tool – a brush cutter. Young trees should be trimmed annually, gradually increasing the height of 5-7 cm to the required size of the hedge.

The lower tier of branches should not be cut. The most appropriate option is to leave it on 10-15 cm wider than the top. This is done to avoid shading lower layers due to the active expansion of the upper.

What could be a threat to the hedge? ↑

Cotoneaster mostly resistant to diseases and pests. However, in rare cases, young shoots or the lower surface of the leaves may be affected Apple aphid. In this case, marinade leaves and shoots may dry up. Also, some types of this shrub are susceptible to scale insects and mites kiselnikova and plum Sawfly.

How is the feeding? ↑

It is worth noting that the dressing is very useful cotoneaster, in particular varieties which have a decorative function. It is done using slurry, which is diluted about 5-6 times, or bird droppings, which should be diluted 10 times. Fertilizers should be made not only to planting and as top dressing. This is very important in the early period, when the plant begins to grow rapidly. Organic fertilizers improve soil fertility through development of bacteria. The most effective are feeding in the summer, especially those that are produced before and after flowering shrub. Also strong is the effect of feeding adult plants.

It is important! By August, you must stop feeding

This is done in order to winter shoots are no longer growing and had to travelnet.

Buy the brilliant for cotoneaster hedges can be in any specialized store.