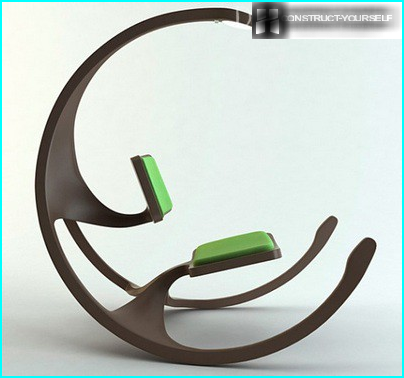 No coniferous crops is no plot. They give a picturesque view of the area in the winter, when all deciduous are bare, and the beds empty. Varieties and species of coniferous plants so much that you can create the whole composition, the decorative effect of which will be high in any season. But there is a caveat: not all coniferous cultures are equally endure the winter. If seedlings were imported from Europe, where the climate is much milder Russian and even Ukrainian — there is a possibility of severe damage to crowns and roots freezing. How to avoid it – face it read more.

How to check the winter hardiness of conifers?

To reduce the likelihood of winter trouble to zero is possible already at the stage of purchase of seedlings. If you buy arborvitae, spruce, junipers in local nurseries where they are several years growing in the same climatic conditions like in your area, problems with winter hardiness will disappear. Weak culture freeze already in the first year after planting in the nursery, so that the shelves simply does not reach.

But often we acquire planting material on the market, where it is impossible to check whether the accurate information about the growing conditions of seedlings gave the seller. And even if all the plants were grown in the local climate there is no guarantee that they are not overfed with nitrogen fertilizer to accelerate growth. And excess nitrogen significantly reduces the immunity of the crops and leads to freezing.

Therefore, the owners themselves must take care about conifers, preparing them for hibernation in the late fall. Among the crops that are damaged in the winter, leading thewiki, fir (except the Siberian and wichi), metasequoia, cypresses and kiparisovsky. In areas with a harsh climate these crops is better to plant or not to tune in to that every winter they have to protect from frost.

In the list of the most unpretentious conifers appear:

Other varieties need to be chosen taking into account the duration and the severity of your winters.

Rules for the preparation of plants for the winter

Despite the freezing temperature, the vital processes in coniferous cultures, not suspended, but only slow down its flow. Therefore trees and shrubs should be prepared for the winter with this in mind.

Before the onset of the first frost (about the end of November) spend the last abundant watering conifers. For each culture up to a meter pour 2 buckets of water, and above the meter, from 3 to 5. This way you will provide the plants a supply of water for perevedennogo period. In late February, when it begins to burn the sun, crown of coniferous comes alive and demands from the roots of nutrition and moisture. And if it is in the soil is insufficient, then the frost binds the earth to a greater depth. The roots can’t take water, so the needles become dry and easy to burn the scorching rays. 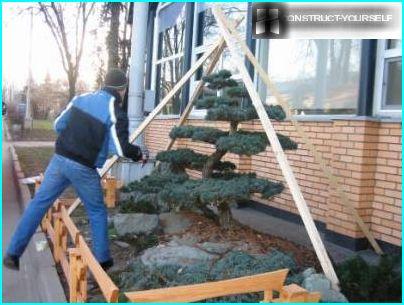 If the area is coniferous trees grown in the technique of bonsai or topiary trimmed, it takes a solid shelter from the snow

To young branches of ephedra in time for the beginning of winter to ripen, you need to properly feed the plants. Since August eliminate all fertilizers, which contain nitrogen. It provokes a rapid growth of green mass, and this will greatly weaken the immune system. Useful in September to bring the soil mixture of potassium and phosphorus. Thereby you will accelerate the lignification of the branches and strengthen the root system.

A necessary condition of a healthy wintering grounds for rare and nezametna varieties of pine is mulching. Ideal mulch – tree bark. She’s a big, gives you the opportunity to do oxygen to the roots and with increasing temperature does not prevent the release of excess vapors from the earth. With this mulching plants will never Wipeout, as in the case of sawdust.

Adult conifers or those that were purchased at a local nursery – sprinkle mulch is not necessary. They will cope with winter without shelter.

Chores in the winter months

If the previous advice you consider, so in winter, your Pets will feel quite comfortable, but that care does not end there. Winter weather brings many surprises, and they need time to fight.

Sometimes in the winter case of heavy snow. Wet snow is a heavy burden settles on the conifers, causing faults skeletal branches and breaking thin. If your pet was covered with sticky, wet snow cap – don’t try to shake it by tilting or shaking the branches of the trunk. At this time, the bark and the branches are so fragile that you will provoke cracking. You need to wrap the end of the Board with a soft cloth and pry it each branch of an adult tree, gently swinging up and down. All branches are in range of your growth Strachowice a stiff brush or broom, driving from the tips to the trunk.

The crown is spherical and columnar varieties can be protected by associating it with twine. Just do not pinch off the branches, so as not to disturb the circulation of juices. The twine needs to be tightly pressed against the crown to the trunk, but not to press. 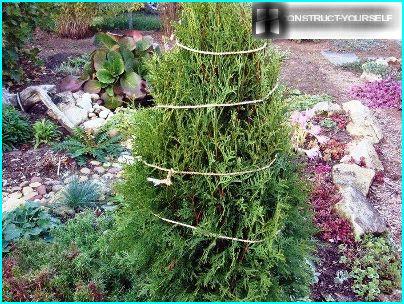 Tied with twine, the crown becomes compact and dense, not missing the snow in the middle, which helps to survive the winter without faults

When the contrast of day and night temperatures of tree branches can be covered, icy crust. It has enough weight tilting your feet and threatening the safety of the plant. To shake off such beauty you will not succeed, as it firmly sticks to the needles. In this case, rescue props that you used in the summer to support fruit trees. Put them under all the branches that bent low to protect from faults. It remains to wait for a Sunny day to the ice slid under the rays by itself.

In some areas winter is squally wind. It is not dangerous to stunted, dwarf trees or creeping shrubs, but vertical arborvitae, giant cedar or spruce can easily turn out by the roots (especially on light sandy soils).

If forecasters announced a storm warning – podstrahuet putting stretch marks. They are of two types: with fixing to stakes and anchor type.

The essence of the first embodiment in that the four sides near the tree shanaytsa to the land of thick stakes, the height of which more than half the height of the trunk. From each foot to the trunk pulled the twine. His tie is not on the bare crust, and pre-wrap the trunk with roofing material or enclose in place of tying a wooden block. However, to drive the stakes into the frozen ground in winter is not always possible, so in this way strengthen the conifers in the autumn, especially newly transplanted trees. 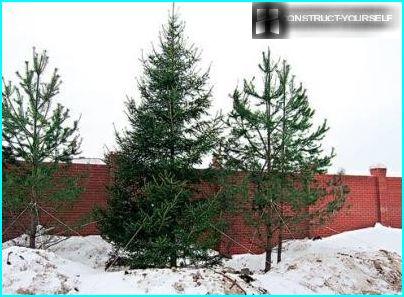 With the help of anchor extensions not only to protect the tree from wind gusts, but to make it grow vertically

The second type — anchor – involves the installation of steel braces, which are attached at one end to a tree, and the second stretch on the anchor. Anchor should be located beyond the root system. To protect the barrel from steel necessary to wrap the tree in a dense burlap, and on top of it to use wooden lining.

Even the most resistant conifers late winter run the risk of freeze or, conversely, to burn. At this time the weather is unstable, and often for days the sun shines so bright, which causes early awakening of the roots. They begin to actively feed in the crown, expecting a quick heat, and then can descend the so-called returnable frosts. To stop the SAP flow to you not under force, but you can cover the crown with a thick non-woven material, such as lutrasil, or at least put on young seedlings linen sacks of potatoes.

To prevent the imminent thaw of the earth, over mulch it with sawdust. Their white color will reflect the sun’s rays, and the roots will not so quickly awake. But with the advent of heat stable sawdust should immediately be removed, so the plant did not vypalo. 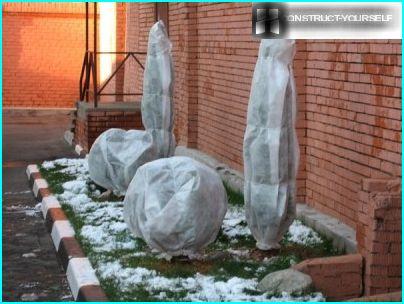 Without shelter lutrasilom or other nonwoven material, the crown of many rare conifers can not withstand the test of severe frosts

Another danger fraught with the sun’s rays, which burn the tender young needles. So at the end of the winter annual seedlings and exotic conifers cover from South shields or completely wrapped crown burlap.

From the sun it is undesirable to protect conifers nonwoven material, as it accumulates heat and can increase the drying out of needles. 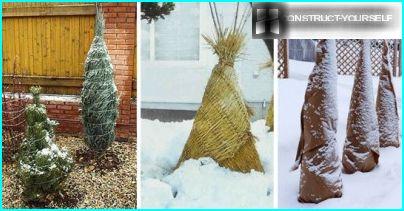 For protection from the February sun, you can use burlap or agricultural fiber, creating a shelter inside a soft shade, and restraining the drying of the needles

Don’t worry if some plants turn yellow winter needles. So junipers and Hemlock respond to cold. Spring color is restored.

If all the protection measures you have spent in time the conifers will quickly recover from hibernation and appreciate its decorative.