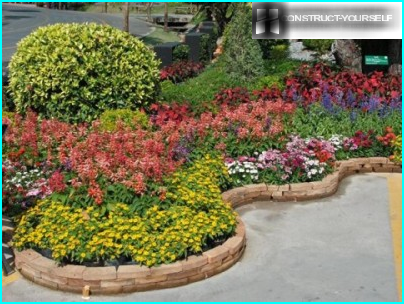 Country construction and repair can not do without the use of a chainsaw, and garden maintenance. Due to a malfunction of the tool can get all the work, so it is important to be able to take it apart to find the issue and fix them. With sufficient experience and skill, is possible even adjusting the carburetor of a chainsaw is a difficult procedure, and more specifically, jewellery. How to carry out procedures for adjustment, we offer you today to disassemble.

No repair can do without knowledge of the basics of the device mechanism. Understanding the constituent elements and working principle, it is easier to determine the cause of failure. 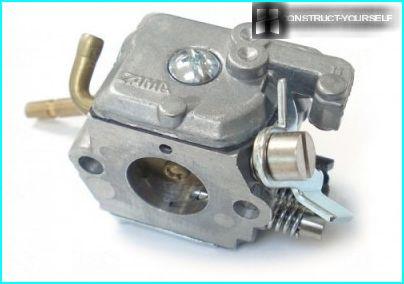 Any malfunction in the carburetor threatens to stop the engine

The carburetor is one of the main functional parts of the engine, which serves for the preparation and supply of fuel mixture, consisting of specific proportions of fuel and air. As soon as the proportion of violated – the engine starts «to act up», and then stops working.

To achieve proper operation of the carburetor can be found by examining it «stuffing»:

Here’s how it looks on the diagram:

The diagram shows the interaction of the fuel and air flow

Working principle: the air stream in the diffuser sprays the fuel, creating a mixture that enters the cylinder. The greater the number of the incoming fuel, the higher engine speed. Carburetors various models work on the same scheme.

When all the necessary adjustment?

Specifically, adjusting the carburetor of a chainsaw is required in rare cases are more likely to have problems associated with the supply of fuel or wear and tear. But sometimes «symptoms» indicate that it is necessary to adjust the mechanism. Here are some signs:

Reasons for failure of adjustment may be mechanical: 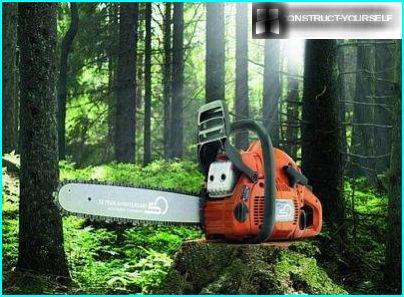 Step-by-step instructions for the disassembly

The device of the carburettor models from different brands is almost identical, so take for example the chainsaw Partner. Each element is carefully removed and stacked in order to make it easier to collect.

The carburetors of chainsaws from different manufacturers if they are different, does not matter

The top cover is removed by unscrewing three bolts. Then the foam composite air filter.

Then remove the fuel hose behind him – thrust actuator.

The upper arrow points to the fuel hose, bottom — for traction drive

Next you should remove the tip of the cable. 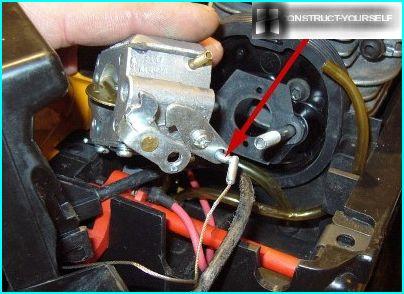 Also gently remove the petrol hose that the arrow is pointing

Carb completely detachable, it is ready for adjustment. Its mechanism is quite complicated, so if you want to further disassemble the carb, remove the items very carefully – they are small so can get lost. 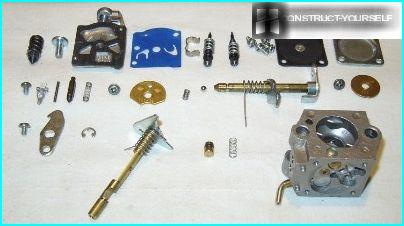 To learn how to adjust the carburetor on the chainsaw, you should learn to distinguish the three screws (some models have only one). 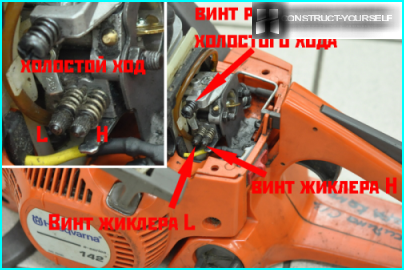 The screws L and H are similar only in appearance, they are actually different

Each screw has its own letter designation:

Factory setting is optimal, and with the screws set engine operation in special situations (work, associated with different climatic conditions). 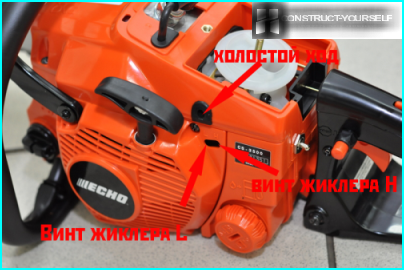 In the diagram, one may see the adjustment screws of the carburetor when the cover is closed 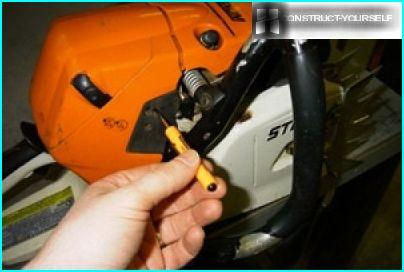 Setting is performed only by the screws L and N. To increase the speed, turn them clockwise. To lower – counterclockwise. The sequence of the screws: L – N – T. If there is any doubt about the adjustment, it is better to consult a specialist, as incorrect configuration can bring the engine down.