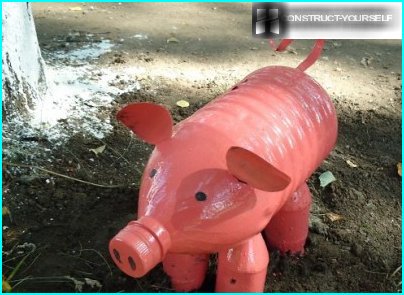 To get a good harvest in the greenhouse, wasting a minimum of resources and physical effort, the dream of every gardener. To realize this dream possible through process automation lighting, irrigation, ventilation, heating of a closed building. To satisfy the needs of greenhouse plants in water, sparingly spending its reserves, allow drip irrigation system that you can purchase or make yourself. As the finished system are sold at very high prices, many truckers are trying to organize in a greenhouse with drip irrigation with own hands. This is to avoid the expense does not work, because you have to buy the supplies separately or in a set. But the money spent is quickly recouped by saving water, served on time and accurately to the root zone of cultivated plants. Culture, not experiencing moisture deficit, grow well and bring a great harvest.

To arrange drip irrigation in the greenhouse, it is necessary to ensure slow flow of water through the tubes to each plant with a container placed at a low height. For this next to the greenhouse design include a tank or barrel, which lifted above ground level at a distance of 1.5-2 meters. From the tank is passed under a small bias system opaque rubber tubing, the diameter of which is only 10-11 mm.

Next to the plant in the tube make a hole and put it in two-millimeter diameter nozzle through which to bring water to the root system. Using the dispenser, tap or auto-sensor regulate the flow of the heated water in the barrel to prevent water waste and excessive waterlogging of the soil.

By the way, why drip irrigation? And here’s why:

Important! The disadvantages of drip irrigation, which was organized in the greenhouse with their hands, include the need to control the filling of the tank with water in the absence of centralized water supply system and clogging the nozzles. The last disadvantage is easily corrected if we include in the system the filter and close the container tight lid.

Selection of materials for arrangement of irrigation

Greenhouses, installed on allotments and garden plots typically have a standard length of 6-8 meters. For such small structures it is possible to use a drip tube of smaller diameter (8 mm). For such thin hoses are available with special fittings to facilitate the connection of individual elements of a homemade drip irrigation system. If you use tube for external droppers, there is a need to purchase even more thin hoses with a diameter of only 3-5 mm. These tubes are connected to the outer droppers and nozzles through which water is supplied to the root system of each plant.

The system is micro-irrigation, collected from the 8 mm tubing, includes a number of microfiching, among which are:

Due to its conical shape, the fittings can easily be inserted, ensuring the integrity of the system at a pressure reaching up to 3 atmospheres. To equalize the pressure to acceptable levels (0.8 to 2 ATM) to build a special system reducers.

The water gets to the plant roots through tips, which can be normal and labyrinth. First choose when the IV is supposed to wear only one tip. The second option is necessary in the case when the IV line via splitters connected two or four tip. 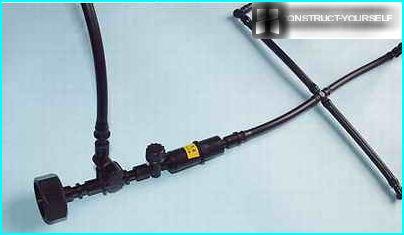 Features of installation of external droppers

Before you start to assemble a drip irrigation system in a greenhouse, you need to plan the landing and to draw a diagram, indicating on it the length of the inlet tubes and IVS connected to him. Then the drawing is prepared the desired quantity of parts desired length, which are collected into a single system by means of fittings. Also purchased additional equipment, the list of which must include a filter and automation at the request of the grower. 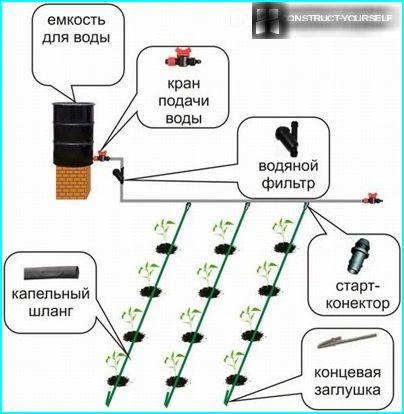 Layout of drip irrigation system in the greenhouse. A holding tank is elevated to create the necessary pressure to supply water via a system of tubes

Drip irrigation collected in the greenhouse under the scheme, is connected to the water supply or capacity drive with a special fitting adapter with thread ? inches. This adapter or just connect with the water pipe, or put between them a filter or connect it to a solenoid tap system automation.

Important! Tubes are cut to length so that the tip fell into the root zone of plants.

The option of a homemade installation for irrigation

Not every cottager can afford to reside in its suburban area or come there every day to water the beds. Invented a variety of homemade design that allows the plants to absorb water in the absence of the owners house.

An interesting variant of the device of watering in the greenhouse at the dacha with his hands is shown in Fig. Striking in simplicity of design, availability of materials needed for its Assembly. Large financial costs cottager does not suffer. 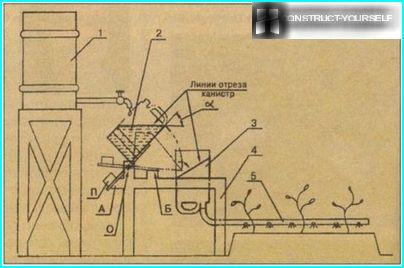 Diagram of homemade setup, assembled with his own hands from scrap materials, for drip irrigation in greenhouse plantings during the absence of the cottager. Legend: 1 — barrel with a valve to set the water;
2 — capacity storage; 3 — hole; 4 — base; 5 — filler pipe.

As the capacity of storage and funnel use a five-liter plastic canisters. The top of the canister is cut at an angle. Tank storage set at an angle, primativa it with adhesive tape to the wooden plank. On the opposite side to the bracket attach the counterweight (P). Provided by the rotation of the drive axis (0) between two stops (A and B) mounted on the base. On the same basis and attached a funnel, the hole of which is connected with a pipe used for irrigation.

The water coming out of the barrel, the capacity of the storage gradually fills it. The net result is a displacement of the center of gravity of the drive. When its mass exceeds the weight of the counterweight, it tips over and water poured into the funnel, and then flows into a pipe with holes, laid near the roots of plants. Oporozhnenija drive returns to its original position under the action of the counterweight and the process of filling it with water is repeated. With the valve regulates the amount of water added to the tank storage from the barrel.

Important! The weight of the counterweight, the angle of inclination of the drive, the position of the axis is chosen empirically. The whole plant can be manually adjusted during a series of pilot irrigation.

And maybe to get a kit?

In sale there are cheap kits for the device of drip irrigation which contain all the necessary elements to build irrigation systems with the exception of the filters. Therefore, filters must be purchased separately. The main pipe is made of 25 mm polyethylene pipes, which are durable, lightweight, non-corrosive. Besides, their walls are resistant to liquid fertilizers that can be fed to plants via the irrigation system. The process of installation of the system described in the manual, which is applied to the set. 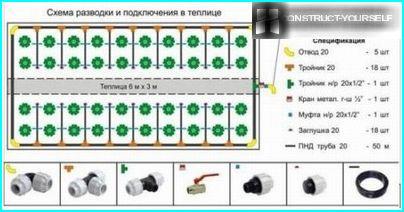 The thick walls of the main pipes drill 14mm holes into which are inserted using a gum-seals, starter motors for irrigation. For starters put the drip tape measured lengths. The ends of the drip tape is closed with plugs. To do this, from each strip cut a five-centimeter piece, which is then put on its twisted end. To make the process of watering the greenhouse has become automatic, it is necessary to install electric controllers powered by batteries. Service collected, drip irrigation system is reduced to periodic cleaning of filters. 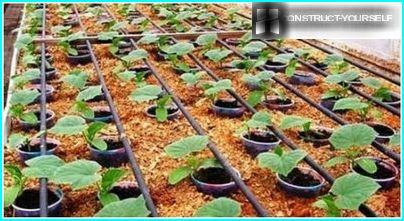 Collected by the system of drip irrigation to each plant will be delivered the same amount of water. It should be considered when planting crops, picking up groups of plants, characterized by equal consumption. Otherwise one culture will get moisture in the optimal volume, and the other in excess, or, conversely, a lack.

To collect the drip irrigation system is better to start at the end of winter. Making a planting plan, and collecting system in accordance with a prepared diagram, you can mount it in the greenhouse after transplanting. Using ready-made sets sold in specialized horticultural shops, do-it-yourselfer a drip irrigation system for everyone vacationers. Thus, implementing new technologies watering of plants grown in the greenhouse, it is possible to achieve good yields and to reduce the amount of effort spent caring for country landings.