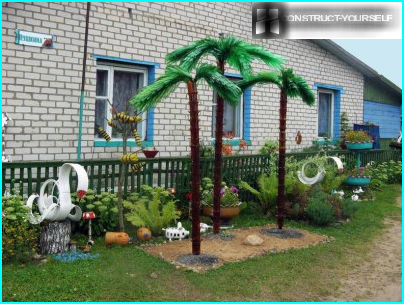 After the acquisition of land cottager begins to solve the most important problems: you need to know where to start to settle in. The most important thing is to provide water. Indeed, since life originated in water, without it all life long can not exist. To bring water where it is possible, but only for personal use. The problem with this method of watering can not be solved. Well, if the water has at least the vicinity of the site. Arrange any, even slight, water: river or at least stream. The ideal option is a spring, but rarely so lucky. It remains to get a pump. By the way, at first suitable homemade water pump. Its use will remove the problem.

This model pump, which do not require electricity, can be used by craftsmen, who were lucky to acquire land on the banks of the small but very rapid river. 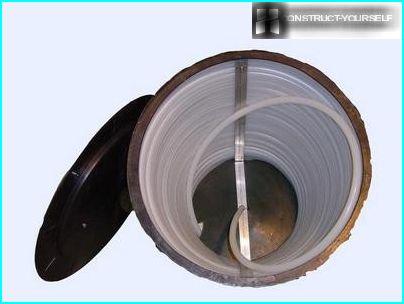 Hose into a barrel fit smooth turns without creases and kinks. And the whole structure generally looks pretty simple but water with it regularly comes ashore

To create a pump you will need:

There are limitations to the environment immersion: depth of flow shall not be less than 30cm, the velocity of the water (flow) is 1.5 m/sec. This pump provides lift water to a height of not more than 25 meters vertical. 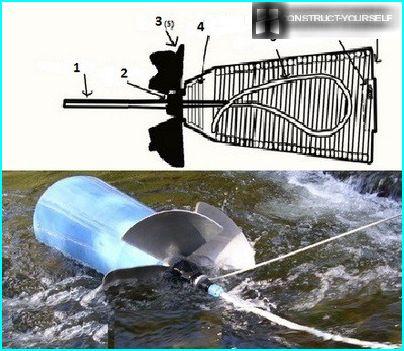 Details of the use of this pump can be seen in the video.

This pump is also used benefits in the vicinity of the section of the river. In a reservoir with no flow the pump is unlikely to be effective. To make it, you need: 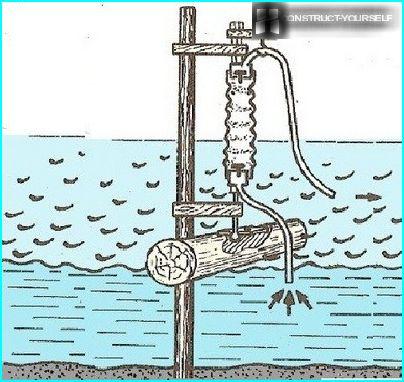 This version of the pump suitable for the river and not with the rapid flow, it is important that it just was, then «accordion» will be reduced, and water is pumped

Both ends of the pipe sleeves closed with valve. With one end of the tube is attached to the bracket, with the beam placed in water. The operation of the device directly depends on the movement of water in the river. That is its vibrational motion must cause «accordion» act. The expected effect at a wind speed of 2m/sec and at an increased pressure up to 4 atmospheres may be approximately 25 thousand liters of water during the day.

As you know, the pump is represented in a simplified form. It can be improved, if you exclude the logs for unwanted torque. For this purpose it is fixed in the horizontal plane, setting on the lift with bolt ring limiter. Now the pump will last longer. Another option improvements: soldered lugs on the ends of the tube. Sleeve on them you can just screw.

Special attention should be paid to preliminary preparation of the logs. Do not forget that it will be placed in the water. Prepare a mixture of natural linseed oil and kerosene at the rate of one to one. The beam itself is impregnated with a mixture 3-4 times, and the gashes and ends as the most hygroscopic, six times. The mixture in the process can start to congeal. When warming in a water bath it will return the flow without losing other properties.

Option #3 — the furnace that creates the pressure difference

Craftsmen, whose idea was embodied in this marvel of engineering, called his brainchild «stove-pump». They, of course, know better, but at the initial stage of its work, this pump is similar to a samovar. However, the water, it is really not warm, and creates a difference in pressure, due to which is his job.

For such a pump should:

The pipe with a crane needed to kick to the bottom of the barrel. On top of the barrel to close the screw plug. In this tube pre-drilled hole and inserted into a hose of rubber. Net head is needed in order to close the second end of the hose before it is lowered into the reservoir. 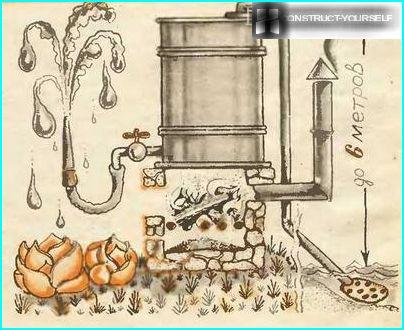 This version of the pump can even be called witty and, most importantly, this «device» probably would work well

In the barrel pour about two liters of water. Under the barrel put a heating element (stove or blowtorch). You can simply dilute underneath the fire. The air in the barrel is heated and goes through the hose into the pond. It will be a noticeable gurgling sound. The fire is extinguished, the drum starts to cool down, and because of the low internal pressure is pumped into it the water from the pond.

To fill a barrel, on average, need at least one hour. This is assuming the diameter of the hole in the hose 14 mm and the distance of 6 meters from where have to raise the water.

That’s really for this product required a special fixture. Where, for example, you will take the black grille in hollow tube which contains the liquefied propane-butane? However, if this problem is solved, the rest is relatively simple. Thus, the grid is, and it is connected with the rubber bag (balloon), which is placed in the can. The cover of the canister, there are two valve. One valve admits air into the container, and using a different air pressure at 1atm goes into the duct. 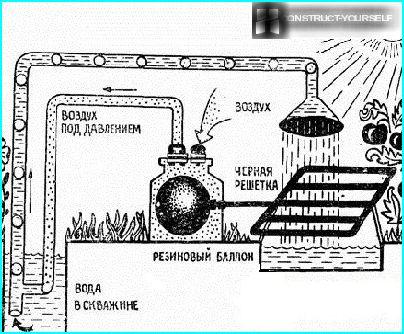 Bars really is better to do black, because black always active products are heated under a bright summer sun

The system works like that. Pour on a Sunny day the grate with cold water. Propane-butane is cooled and the vapor pressure of the gas decreases. The balloon rubber is compressed, and into the container, air enters. After the sun dried the grid, the pair will again inflate the bag, and the air under pressure will enter through the valve directly to the pipe. The air tube becomes a kind of piston, which expels the water through the shower head on the bars, after which the cycle repeats.

Of course, we are not interested in the process of watering grids, and the water that is going under it. Experts say that the pump works perfectly even in winter. Only this time, as the cooler uses cold air and heats the lattice water extracted from the ground.

Option #5 — a supercharger from a plastic bottle

If the water is in a barrel or other container to use in this case, the watering hose was problematic. It is actually not too difficult. Literally from scrap materials to construct a homemade pump for pumping water, which will work according to the compensation principle the level of liquid in communicating vessels.

The injection of water takes place as a result of several progressive movements. Valve, which is located under the lid does not allow water back into the barrel, forcing by increasing its volume, the flow out. Frivolous at first glance, the construction is solid help in country work.

For the manual pump must:

How to assemble the pump and how it will operate, look at the video where everything is explained in detail.

Option #6 — detail from the washing machine

The habit of buying new things when there are old analogues, very wasteful. I agree that old washing machine is no longer able to compete with the new models, but the pump can still serve you well. For example, it can be used to pump water from drainage pit. 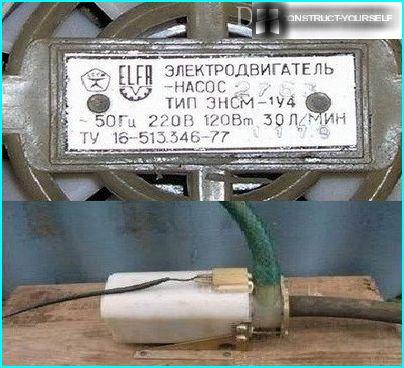 The washing machine has long served its. It simply drove the new model with new features. But her heart is the pump still able to serve the owner

For the engine of this pump requires 220V. But it is better to apply power to an isolating transformer with reliable isolation of input and output windings. Do not forget about the qualitative grounding of core or the metal casing of the transformer itself. We are making adjustments to the power transformer and motor.

We use a centrifugal type of pump, so we put a valve on the end of the hose dipped in the water, and the system filled with water. A return valve in the disassembled kind is shown in the photo, too, can be removed from the washing machine. And blue proterty cork just perfect, so once the hole was also closed. Probably in your inventory there is something similar. 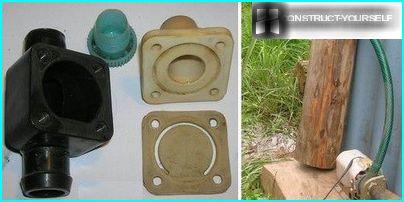 Literally from the trash, as it turned out, you can collect quite a functional thing that just works and does its job well and quickly

The resulting homemade pump works very well, pumping out from a depth of about 2 meters the water with decent speed. Important it down on time, so that the air does not get into the system and not had it again fill with water.

Everybody remembers the story about the screw, invented by Archimedes. It carried the water supply in ancient Syracuse, who did not know electricity. Very witty variant of application of the Archimedes ‘ screw was invented in Africa. Pump-carousel serves as both entertainment for local children, and a very functional facility, which provides water to a small settlement. If you have children and they have friends who like to ride the carousel, take this experience into consideration. 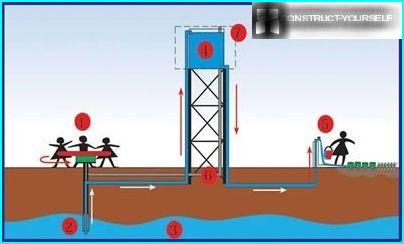 As you can see, opportunities to supply a great many. And electricity in this issue may not participate. It turned out, some pumps for water with their hands can make even a schoolboy. It is important to have the desire, bright mind and skilled hands. And the ideas we throw.