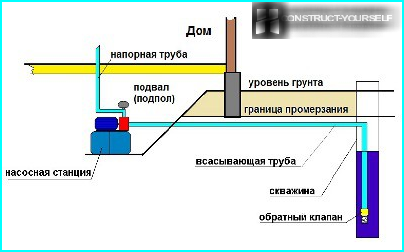 Modern people often go to the country to relax, chat with friends or just being out in nature, away from the bustle of the city. To sit in company and entertain guests with a barbecue particularly pleasant in the fresh air, but with amenities. Such conditions can provide a cozy gazebo in your garden. Thinking about the erection of a building, each represents its own way. For someone tempting is a light wooden structure covered parthenocissus. But someone really wants and to meet New year with relatives on a snowy cottage. Better all-season gazebo of brick for this purpose nothing will come up.

Brick arbors are becoming more popular. To understand why what is happening, let’s talk first about the advantages of this construction.

However, disadvantages also exist, and mention them must.

Still a bit I want to focus on cost. Yes, the design of brick spend more money, but it is at the stage of construction. The wooden design will need to look after constantly. 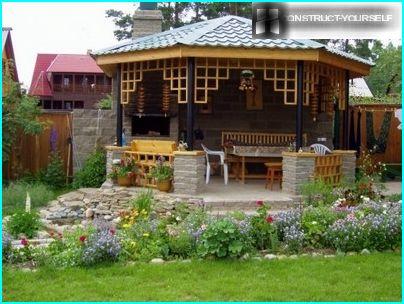 The gazebo of brick can completely transform with the help of the most different finishing materials. It will fit perfectly into any landscape conceived 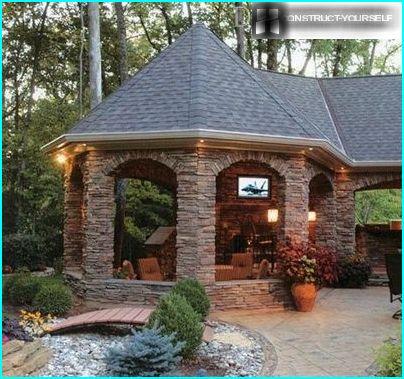 The gazebo, decorated in the same way as the main building. Careful design of small size inside which everything is provided for a pleasant stay

Before starting work, you must determine the type of constructed buildings. It is a fundamental issue, since the choice depends on the kind of Foundation that will lay. 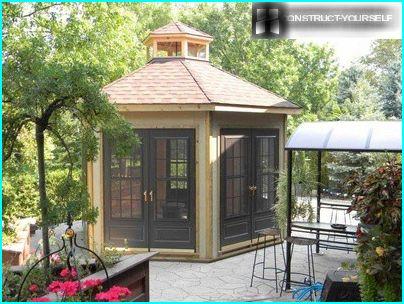 Making a choice, is to ensure that the future building would not detract from the overall landscape design of the site, as it harmoniously complement. 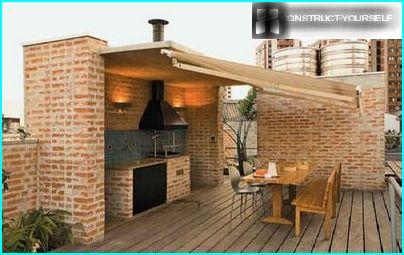 Semi-open pavilions will be enough to enjoy the recreation fully. Because the New year happens only once a year, and holidays during the warm seasons so much more

The concept of the future building must have a single style decision with all the buildings of the site. In addition, you need to decide what it is possible to distinguish and to estimate its shape and size according to their own needs and opportunities. Before you can build your chosen brick gazebo, make a scheme for it. After all, if something goes wrong, the capital structure will be difficult to alter. Based on the schema easier to do the calculation of consumption of materials. No structural elements should not be forgotten. Think about what utilities you will need. 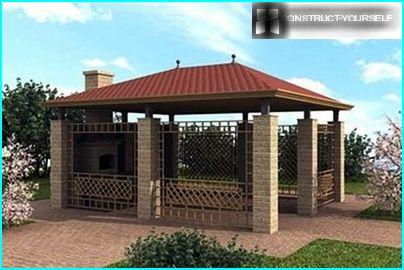 To choose the right place for the gazebo is half the battle. It is important not only that the building was surrounded by picturesque nature, but also the wind direction: the smoke from a barbecue or fireplace shall not interfere with anyone

It is recommended to carry out geodetic works prior to commencing any substantial building on the site. This reasonable precaution will help avoid troubles in the form of silt, and so on. When choosing a place for a summer kitchen with barbecue, try to arrange it so that it does not disturb anyone, keep in mind the wind rose, to avoid quarrels with neighbors. It is important that there were trees with a powerful root system, which can further damage the Foundation.

Selected the construction site should be carefully prepared. The surface must be straight, and if needed, it need to align. Now, based on circuit structure, mark the plot. Remove the fertile soil of approximately 20 cm: it will be useful to you for other needs.

We list all the basic tools and material that may be useful.

If, in accordance with the selected design style will need any materials, the proposed list may be amended. 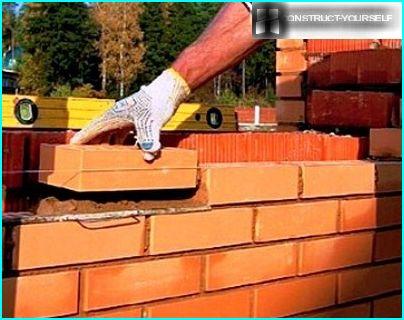 It is very important in the process of laying to use the level, plumb and line, to check geometry constructions. Mistakes made at the initial stage, will lead to imbalance of the structure

If the plan construction of an open construction, then it can be done and columnar, and tape or solid Foundation. It all depends on how large the total weight of the structure. I would not want to design subsequently twisted. If brick pavilion will be gated, then there is no choice: will have to build a solid slab Foundation. 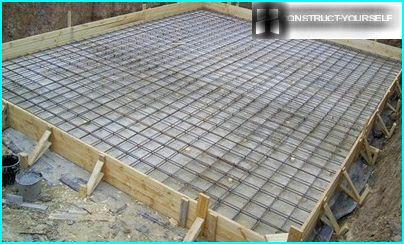 The Foundation slab will withstand even a massive enclosed structure, if the building is open and its weight is small, it is possible to strengthen the Foundation only where there will be a barbecue or fireplace

You can rent a very nice brick semi-open gazebo with their hands and build. For her we need a solid reinforced Foundation. Dig a pit whose depth is not less than 1 meter. Don’t forget about summing utilities. Construct the formwork to be Placed in a pit approximately 15 cm of gravel to form «pillow». The surface of crushed stone do smooth, stamps and cover with a layer of waterproofing material. 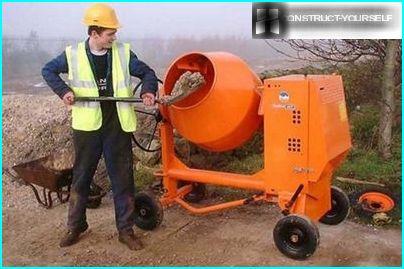 Mixer is expensive, its use is justified only in case if a lot of construction, and this equipment is constantly in demand. At small amounts of works can mix the solution by hand

Prepare the grout according to the following proportions: one part cement, three parts sand and five parts gravel. Add water so that the mixture was quite fluid. Pour about half of the desired height of the future Foundation, after which the valve is placed, connecting its parts with a special knitting wire. Pour the remaining part of the solution and align it.

Immediately you need to install the pipes that will serve as the Central pillars supporting the roof structure. Approximately 10-14 days, the resulting Foundation will be to gain strength. Don’t let him dry out and crack.

The stark concrete is laid the first row of bricks. On the basis of soaked masonry cement mortar consisting of 3 parts fine sifted sand to 1 part cement, laid bricks. Do not forget to apply the solution and on the lateral surface, and also to use the building plumb and level. On top of the first row again recommended to put a layer of waterproofing. 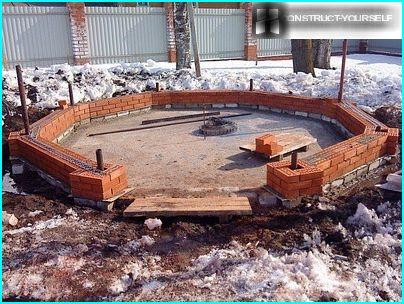 The first rows of masonry should be measure very carefully, because right from the beginning of masonry depends on its quality and appearance. It is better to lay the bricks without mortar

Next, layer by layer, continue to build up the pillars and walls of the structure. There are several methods of bricklaying. The summer kitchen can be done by laying in a half-brick or even in the form of a lattice of bricks, when the bricks are stacked to each other, not closely, and through the gaps. How carefully and beautifully to do the clutch, look at the video.

If a future gazebo will be closed or half open, the most often used method of masonry 1 brick. In this case, the bottom row of bricks are laid with a thickness of one brick, so that the long side was positioned across the walls, and in the next row bricks are placed at right angles to the bricks of the previous row. 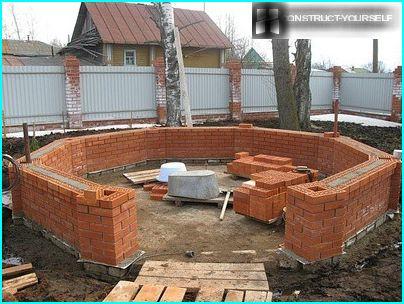 The walls of the gazebo grow easy on the eyes. That it was so in practice, buying a brick, carefully check that the seller documents. Only gazebo from bricks made in compliance with the rules, will be a real decoration of the garden

How to lay out the columns shown in the photograph. In this case, around the pipe is placed four bricks. Between the pipe and the bricks formed a space which should be filled with cement mortar. Pour it needs in small portions. To attach the rafters to the pipes supporting pillars, it is most convenient to them to weld metal bars. Once again about the formation of the bars can see in the video.

Internal operations include the flooring of the gazebo and construction of fireplace or barbecue. In this case, one barbecue not done, so had a full summer kitchen with three-way pipe, able to provide excellent traction. As a floor covering is used neat paving. Blind area around the buildings will not allow to accumulate around it rainwater, which can wash away the Foundation.

Roof of gazebo can be very different. But in this case we are talking about a hip roof. In order to do it right, you need to install the center building a temporary rack. Its purpose is to support polygonal washer at the highest point of the structure. The washer will be attached to the rafters. Opposite from the washer the ends of the rafters are fixed on the pillars holding up the roof. 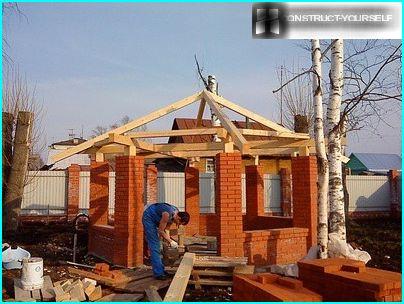 Hipped roof shape is often chosen for pavilions, but there can be options: hipped, gable and shed roof, even the wing

Below the roof structure was solid enough at a distance (between one third or half) of the total length of the rafters need to install the crossmember. To them must be attached additional truss bars. They are located right in the middle of each of the roof slopes, turning it into a kind of umbrella. 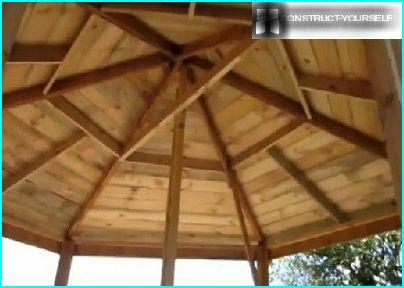 This hip roof gazebo from the other, but it demonstrates how this design should look like from the inside

For each Stingray installation of lathing separately. The crate looks like the boards are tightly fitted to each other. The material for the roof should be cut out in the shape of triangles covering the sector of the roof, precisely according to their size. Joints you can draw pretty ready free style elements or metal strips. They will be mounted on top of the joints. 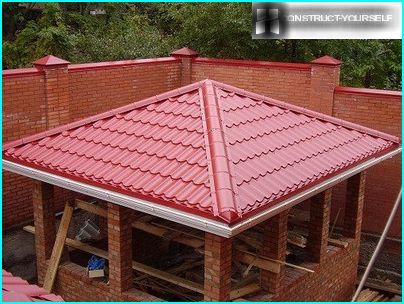 In this case, shows the hipped roof of the gazebo, covered with metal, in the example used shingles. Both materials can successfully be applied 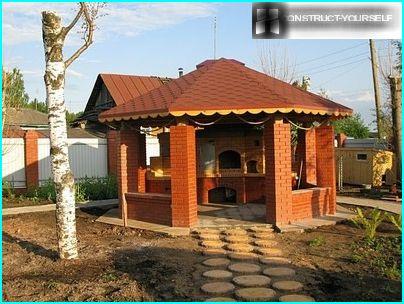 Here’s the finished pergola can be built with your own hands in a relatively short time, it would wish

Our structure is ready. As you can see, the gazebo turned out elegant, comfortable and very functional. Of course, in the summer kitchen you will not be able to celebrate the New year, but to celebrate the may holidays here will be very pleased.