The money invested in advertising, generate revenue by 30-35% higher than the same funds invested in the modernization and implementation of new ideas in engineering and technology. We, as consumers, don’t really want to buy products made in the ideas and calculations of the 50-year-old, outdated, but beautifully designed by the designers and properly filed marketers. 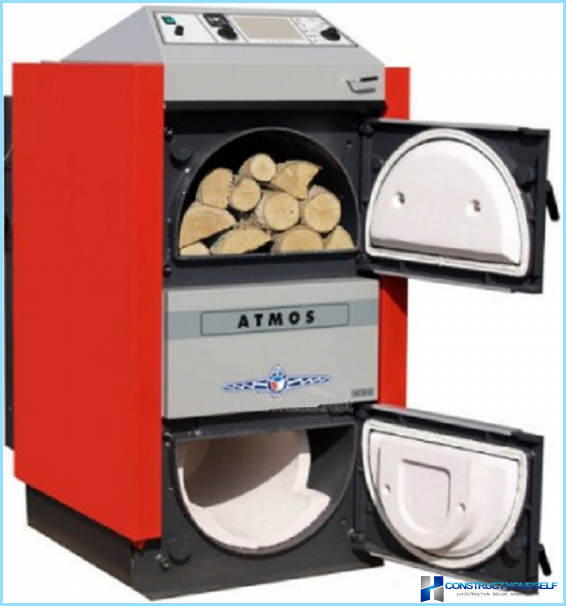 We will focus on the pyrolysis boiler. The name itself suggests complex device that uses an intricate scheme of burning coal or wood in order to obtain the maximum amount of heat energy with minimal human intervention.

It is worth to mention several important features of these burners:

There are designs in which no elektronabava air, but in this case, the pyrolysis flue for the boiler needs to be about 30% higher than standard to provide the necessary pressure of the air in the chamber pyrolysis and gasification in the cavity of the residual combustion gas mixture.

The principle of operation of pyrolysis boiler ↑

Modern pyrolysis boiler is more properly called a gas generator. These devices worked with the famous lorry and Abstracts during the war and early postwar years, in conditions of severe shortage of gasoline. Was already «honed» in practice, the most successful design of the pyrolysis installation.

The principle of operation of pyrolysis boiler is based on the use of three separate chambers:

The Council! Do not pay attention to advertising, the assurance of the universality of pyrolysis boilers, they are extremely sensitive to moisture content in the fuel, it should not be more than 25%. 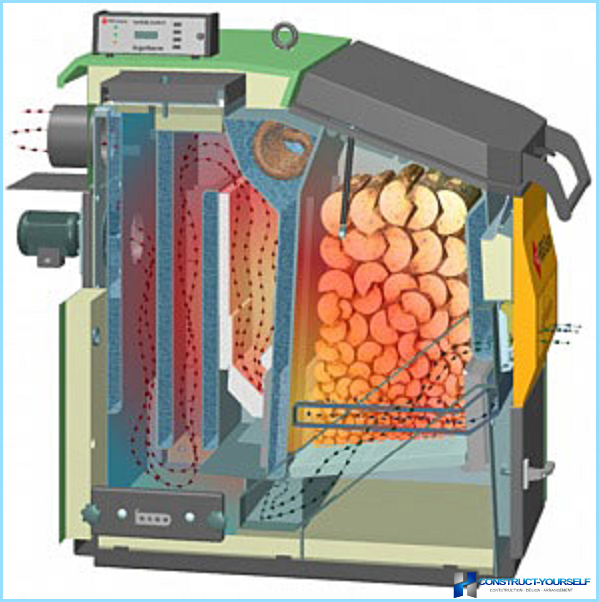 The idea in building a pyrolysis two stage combustion is very successful. The combustion process cleaner and more stable, without nedogonov fuel in the ash. By itself, the process of burning wood is uninteresting, you need something to transfer the released heat to the air in the heated space. Through this organization, pyrolysis and heat, was sufficient just to build a pyrolysis coppers of long burning with a water circuit. To remove the heat from the fire burning and pass as you would in a conventional gas boiler, or to regulate its work. 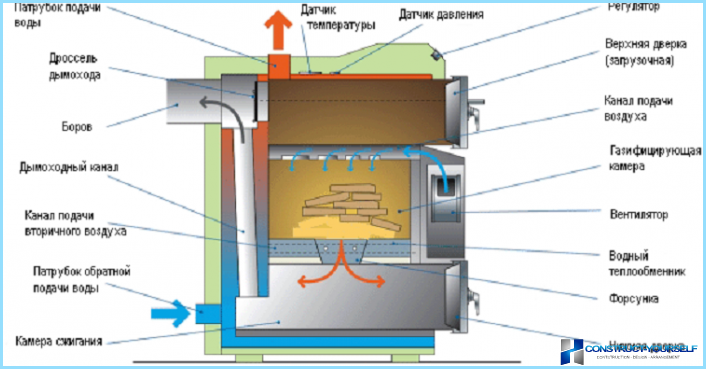 The top and bottom of the camera pyrolysis boiler, what is their difference ↑

Execution there are two different designs of boilers, pyrolysis combustion with top and bottom location of the chambers, the combustion products of sublimation of fuel.

The principle differences in the structure of the boiler is clear of the circuits and drawings. In the system with lower position of the chambers of gasification is easier to serve and clean up from the ash grate and drives. In constructions with the upper position of the pyrolysis chamber it is easy to provide fuel for a day without the use of special bins and indicative. The competitor with the lower chamber hopper will work piece of wood for 7-8 hours.

How to burn the fuel in the pyrolysis boilers ↑

In both cases, pyrolysis boiler used a primary and secondary air. Primary is presented in a very limited number of gasification compartment. This place can be called the heart of the gasification boiler, its efficiency and the thermal efficiency is determined by the ability to deeply and efficiently to gasify the fuel, regardless of its quantity, quality and the capacity for sublimation. 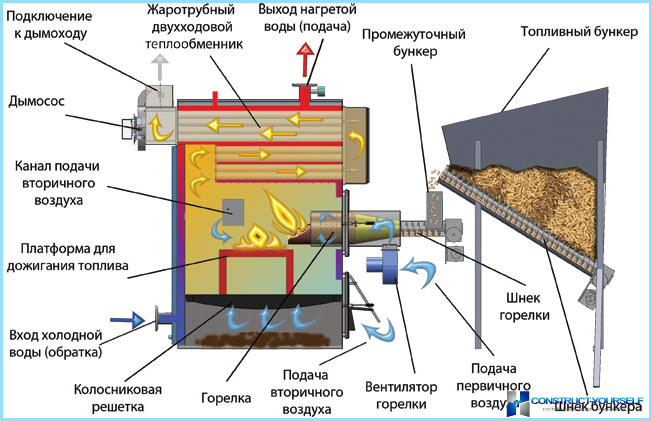 In the pyrolysis stage of gasification of the fuel, all the heat from the glow fuel and try to preserve the volume of the chamber, for that chamber volume teploizolirovat from the external environment and are often made of ceramics, which is resistant to the most aggressive compounds that are full, for example, sulfur coals. Sometimes, instead of whimsical ceramics we use special grade of cast iron, not bad showed itself in the work. Ordinary steel will burn through the holes in a few weeks. On this basis it is easy to distinguish a decent pyrolysis boiler from imitation of a good boiler.

In addition, in some embodiments, pyrolysis boilers invented the fuel bunkers, which allows feeding the wood into the gasification chamber of the fuel. Now the owner is enough to take care of once a day loading compartment with firewood or coal, and periodically remove the slag and solid waste from storage.

Adjustment and control of pyrolysis boilers ↑

Theoretically, the depth of useful fuel utilization can reach 90% only on high-quality wood fuel. For comparison: the usual boiler on the wood squeezes the maximum of 50-60%. All the other stories – fiction marketers.

Very much in the work of pyrolysis of the boiler depends on the stability of automation. If the wood is burned, the composition of gasification products of any kinds of wood about the same, with minor difference in caloric content and volume of the evolved combustible gases. In such conditions it is very easy to maintain the supply of optimum quantity of secondary air to blow the excess air the heat in the pipe. 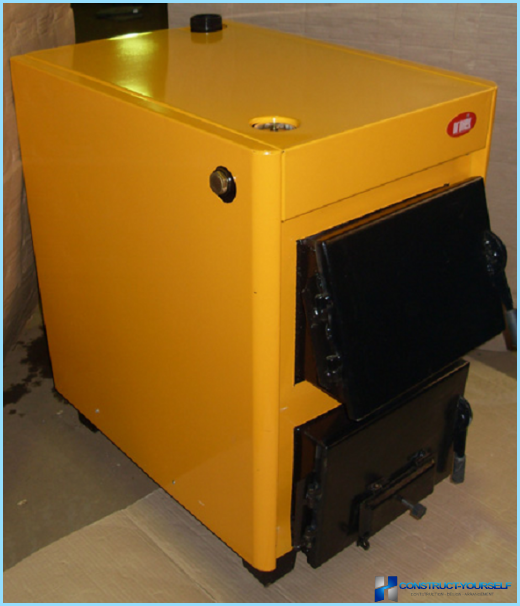 In case coal is much more serious. Coal gasification – the process is very complex, and proper deep gas need a complicated control system, so many manufacturers of pyrolysis boilers generally refuse to work with such fuel.

Problems of gasification of coal ↑

The process of gasification of fuel is very complex and multifaceted, requires accurate dosing of air. The cheapest options of pyrolysis boilers is generally not intended for other work, except for firewood or wood pellets. The fact that gasification or ternovskogo wood can never be controlled. It is sufficient to heat the wood in a closed space of up to 270-300 degrees, and then the process gas will go in an automatic mode without air supply or heat.

Products of coal gasification are highly dependent on the grade and types of coal, thermal regime. Moreover, the calorific value of gases and the temperature can be very «walking» depending on the gasification temperature and the amount of supplied primary air. If automatic mode is incorrectly adjusted, due to the high temperature in the afterburning chamber can be burned and the heat exchanger to the accident.

Review owners of pyrolysis boilers, often you have to almost manually choose the optimal brand of coal and the size of the pieces. Usually in this case to run the boiler using firewood, and then transferred to the coal or coal briquette.

The pyrolysis method is more economical. Even the most expensive boiler of conventional design are not able to fully burn the coal, in the best case, the residue of unburned fuel in the slag will be 10-18%. Power plants in industrial combustion «backlight» oil or natural gas ledogar coal is 5-10%.

Good quality burning allows you to burn fuel with obtaining a minimal the amount of harmful and carcinogenic substances. But if the design of pyrolysis boiler depressurization valves or hatches, may cause indoor leaks of carbon monoxide, which is a major component of gasification products fuel.

Pyrolysis boiler more difficult to maintain, its effectiveness depends on the quality and reliability of the automation. In addition, the normal stable operation is possible only when you download at least one third of the regular amount of fuel, while there are certain restrictions on the size of the pieces and humidity. 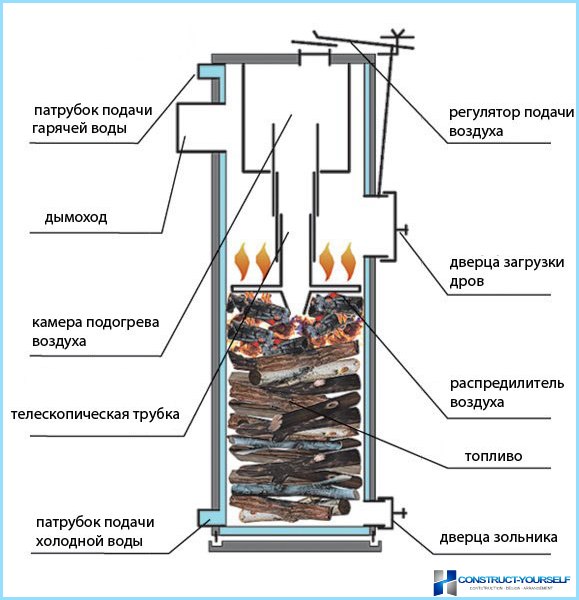 Our man on the shoulder any task. Homemade pyrolysis boilers with an upper chamber have long made their own hands from scrap materials and old propane cylinders. Instead of a fixed top lid removable use with a pipe, and, of course, in this design gasification boiler completely lacks any automation, so they work, as a rule, waste oil and wood.

Despite the relative «antiquity» of the gas generation, pyrolysis boilers can be considered a fresh idea, an embodiment of which demanded the use of modern means of automation and control the combustion quality. The next step in the development of boilers will be the so-called flameless combustion, in which fuel is oxidized at a very low temperature of 200-300on with minimal heat loss.