New technologies are rapidly evolving. This applies to all areas of modern science, especially the part that relates to the improvement of living conditions. Today, when the cost of energy is constantly growing, popularity even the most incredible sources of energy. The creation of alternative systems of space heating or combined options allow you to apply new methods in conditions where there is no possibility to use the common ways of generating heat. This applies to remote areas or remote small towns.

Energy from sunlight is one of such innovations. Although if you remember the calculators and watches with solar batteries, it is clear that it is well forgotten old, but enhanced for today’s realities.

Most of the countries, where days of sunshine a year, much more than other long and successfully used heating solar collectors. For those seeking to rid themselves based on common system utilities – it is a real event. So, let’s learn more about the technology of heating by using solar energy and types used for this purpose batteries.

In the first case, the sunlight is converted into electricity that gives the opportunity to organize the work of heating devices. A significant disadvantage of this type of batteries is that the larger the modules that absorb infrared radiation, the more electricity they will produce. For normal heating an average home you 10-12 panels of solar collectors. Of course the cost of the entire heating system also increases as you increase the area of modules.

In the second case, under the influence of solar energy heats the water that flowing through the reservoir, gives up its heat to the room. In this case, the thin-film system is able to absorb not only direct sunlight, but also weak scattered light. 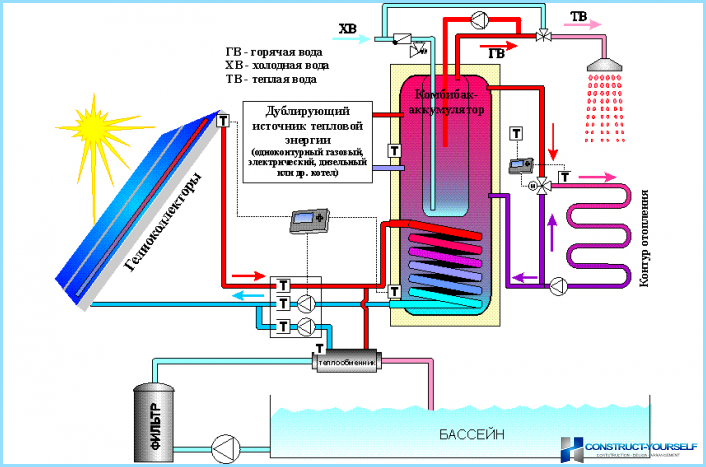 Before planning the installation of heating using solar collectors need a little more info to explore all sides of the system. 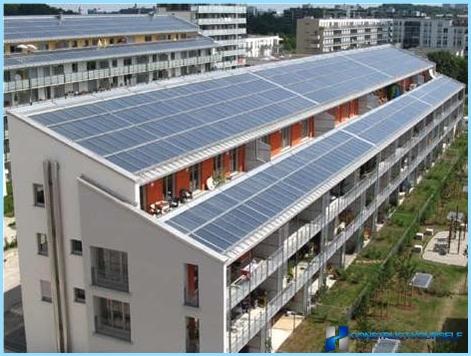 To be as objective as possible make known the faults.

Today, there are several varieties of reservoir models, but they all have similar principle and some differences in design and (sometimes very significant). In the main they are one is the collection of solar energy and its subsequent processing, so necessary for human heat and electricity.

Consider the most known solar collectors for heating houses.

The air manifold hub, which operates on the principle of normal greenhouse effect. Namely, the solar radiation by exposing the coating, conducting the infrared light, gives it a special receiver. He absorbs, but immediately heats the air, which gives off heat to the room. 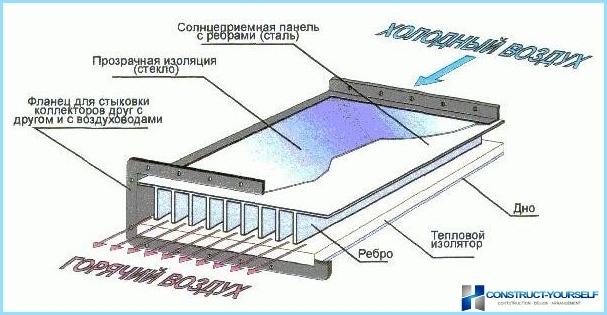 Tubular manifold, made up of a large number of tubes, painted black. They are filled with different temperature coolants, due to which it is a constant movement or circulation. Tube, due to the large surface area absorb a greater amount of solar energy, therefore, high efficiency. 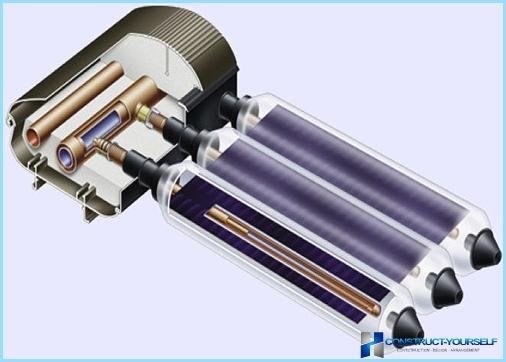 Vacuum solar collector for heating based on the principle of operation of the tubular manifold. Structural difference lies in the fact that a smaller tube (black) fits inside the other diameter (glass). The free space is filled with vacuum, providing reliable insulation.

The mobile system. The principle is similar to conventional sunflower. Due to a special sensor surface, equipped with a radiation absorbing material, rotates to follow the movement of the sun. But always so that the surface is always located at a right angle to the sun. High-precision light sensors make this system somewhat more expensive than others, so while it’s not as common as other.

Flat collector, the most technically simple and common. Flat (hence the name) box, black in color, covered with a layer of glass. It collects sunlight and transmits it in the form of thermal energy to the air in the room. The most affordable option. 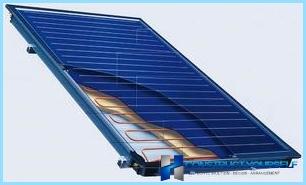 Hub radiation from a technical point of view, the most complex model of the manifold. Light radiation is focused in the small area receiver, specially assembled reflectors with mirror surface. The device also features a motion sensor (travel) sunlight, which further affects the efficiency of the collectors of a solar system. 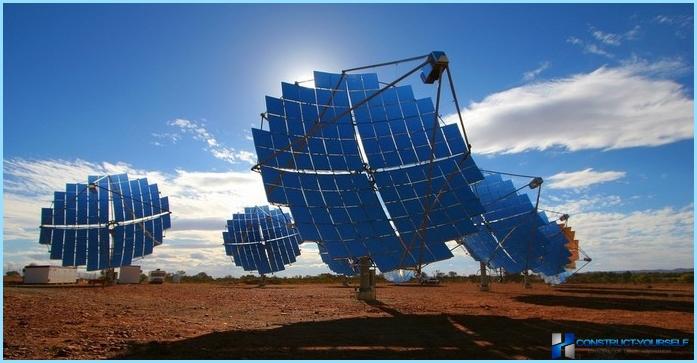 Installation of the solar collector with his own hands ^ a

Of course, based on the cost of panels and installation works, it is clear that such heating is not to everyone’s means. But there is always the possibility for artists to make a simple version yourself.

The most simple version of a solar collector craftsmen can try to build in the country. You need to take galvanized sheets (the number depends on the surface area) and they cover the southern slope of the roof. Top install a metal barrel with a capacity not less than 200 liters. Barrel to cover with black paint and bring water to her. The day the water can warm up to 60-70 degrees and heat the room. Simple and affordable collector ready.

Of course, this heating system will not be able to work effectively in a cool or cloudy days. But as a holiday option very suitably.

Alternatively, the installation of a solar system on the basis of the coil from an ordinary refrigerator. 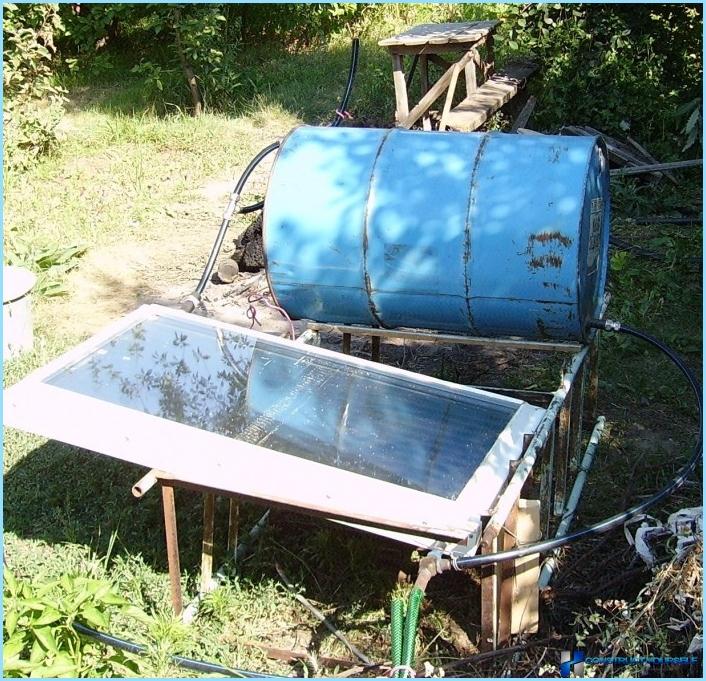 Need glass, foil, old coil, barrel and materials for water fittings. Originally under the coil made a special frame of laths, and inside it (on the bottom) attach the rubber Mat and cover it with a layer of foil. On top of the foil is attached cleared of freon coil.

That part of the frame where the coil is covered with glass, which should be still fixed.

Positioning a model of a manifold is necessary on the South side of the roof at an angle of 35 to 45 degrees. Tubes attached to the coil and barrel. Cold water flowing through the collector (coil) is heated and fused in the barrel. And from it also the pipe back into the manifold. This option is also more suitable for truckers.

Long interested these systems. We wanted to make the heating system, independent of the city. Examined all the models and settled on movable panels and collectors. Was a bit more expensive, but now I don’t have to pay huge bills for hot water and heating. The heat and autumn, and winter. Spent the money long back, as saving on costs of housing.

My buddy has long been established at his dacha near Rostov such a system. I still do not believe. But last spring he visited and experienced the beauty of solar heating. Even if the nights were cold, the other heated a small fireplace, and it was enough for a comfortable temperature. Back home, installed on the roof flat collector. Received energy is sufficient for heating even in winter. Very glad I installed solar heating, for him the future.

Watch a video about the heating system of a private house with the use of solar collectors:

Before you decide on the purchase and installation of the heating system solar collectors view all the useful information, read reviews on specialized sites. The choice is always yours.