The owners of private houses and city apartments know that most unpleasant smell spreading from the sewage in a city apartment. Odors to circulate freely from the kitchen, bathroom, toilet. 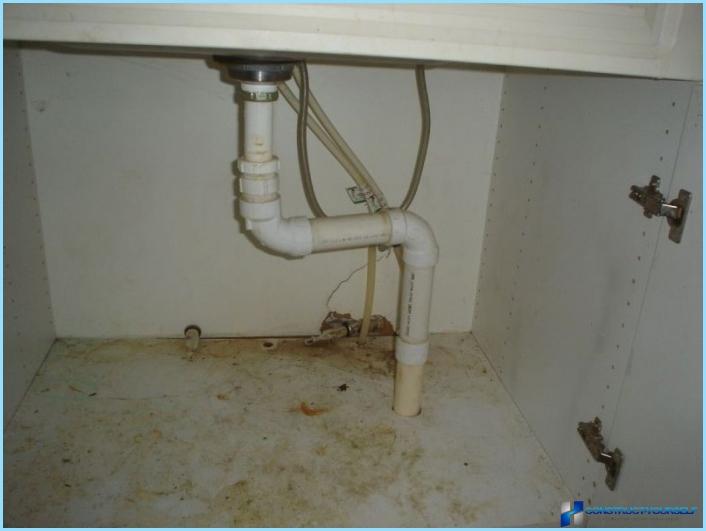 This trouble occurs suddenly, spoiling the mood of the inhabitants of the house. What causes such phenomena and how to solve
the smell of sewage in the apartment?

Causes of smell of sewage ↑

There are several major reasons leading to the occurrence of an unpleasant smell of sewage: 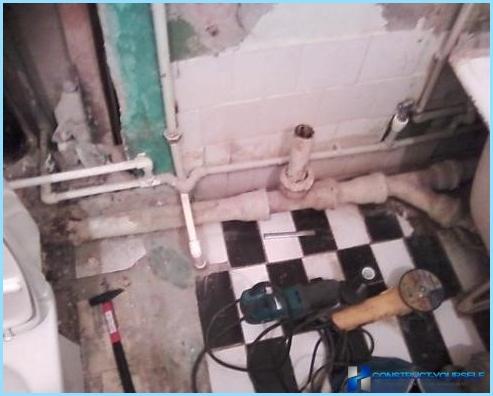 Attention! A significant problem will be the drain, made with serious violations that will cause problems with its operation.

The solution to these problems ↑

Their own to cope with the problem of an unpleasant smell is difficult enough, you will have to completely rebuild the ventilation system, to perform the replacement of pipes in the sewer system.

The video presents an algorithm to eliminate the smell of sewage, given a sequence of actions

The Council! Invite a professional plumber, you will save time and health. 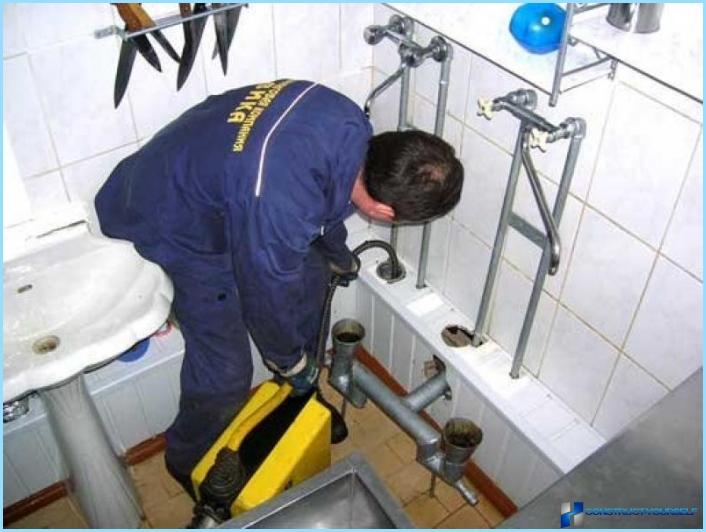 What will it take to work ↑

To be sealing the kitchen water pipes, please have the following materials: 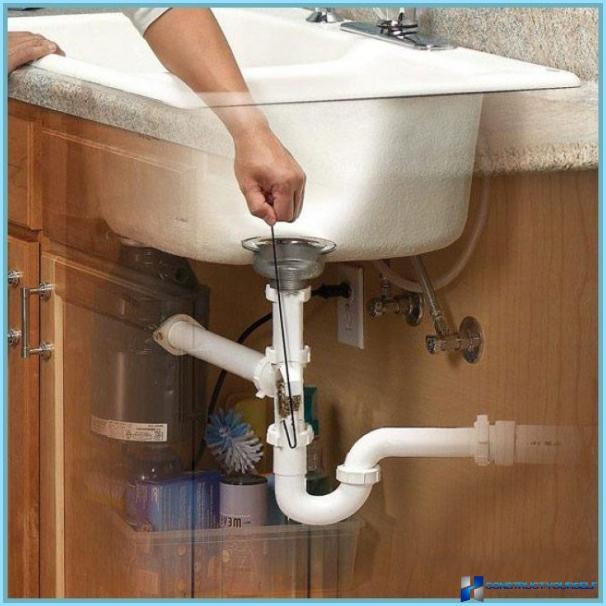 A solid piece of rubber cut from old tires, size should be of a size that you can wrap the sewer pipe. Sequence of actions:

If you find a crack in the sewer pipe of the toilet, the sequence of actions will be different. For repair you will need:

A ratio of 10 to 1 diluted in the capacity of cement. Cut gauze or a medical bandage into strips at 30-40 cm Impregnated with a solution of cement prepared bandage, wound it on «problem» pipe. Repeat actions until then, until there is a real cocoon. 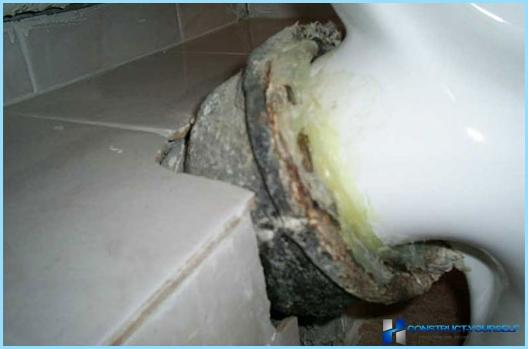 Attention! Full drying time of cement mortar – day, throughout this period of time will have to limit the water flow to the apartment.

Getting rid of the odor in the bathroom ↑

If you need to get rid of the drain smell in the apartment, appeared in the bathroom, you first need to figure out the cause. Often the smell arises in the bathroom because of leaks, to detect them difficult, because not easy to get to plumbing pipes, prevent the cabinets, tub, sink, and other items. Professionals advise to leave access to the drain pipes, for example, to put a removable screen, for dismantling which (in emergency situations) it will take several minutes. 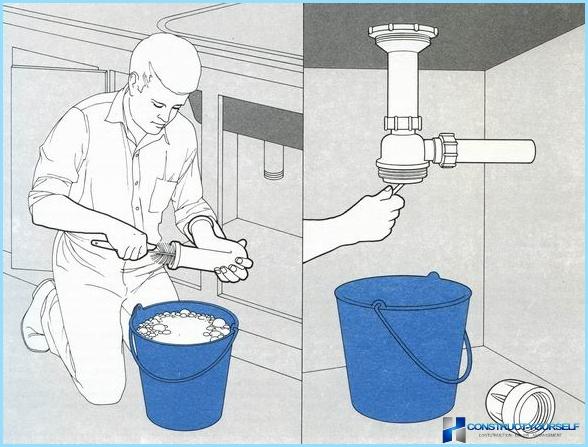 In order for the smell of sewage did not spread from the bathroom throughout the apartment, it is advisable to do a minimum number of joints during installation of sewer pipes. If you receive this problem as the destruction of the drain smell in the apartment, the problem should be solved immediately. If your home has plastic pipes, the joints shall be sealed with rubber gasket. The first odor you need to change the rubber gasket using silicone sealant. A drain created from cast-iron pipes, involves sealing leaky joints gauze cocoons, made of cement mortar.

Siphon or hydraulic press, put in a private home or apartment in order to prevent occurrence of an unpleasant smell of sewage. The specificity of the siphon device allows to separate the two is a heterogeneous environment, does not allow them to mix. Why hydraulic press consider the cause of in the toilet or bathroom odors? The problem could be improper installation of the water gate. For example, its connection to the sewer or to the toilet, sink, tub, made with violations of sealing. When this occurs, the displacement of the strip or complete loss, and all odors will be in the kitchen or the bathroom. When you install the trap directly under the sink, you need to give it a S-shaped form. This location allows you to avoid fluid retention. Fixing such a corrugated pipe is possible using copper wire. The main causes of problems in the siphon consider pressure drops in the sewer system. At excess indicator normal atmospheric pressure, there is a sharp splashing in the toilet or bathroom odor. The gases from the total sewage penetrated into the room, and when filling with wastewater the total volume of the pipe, the water stopper was once lost water. 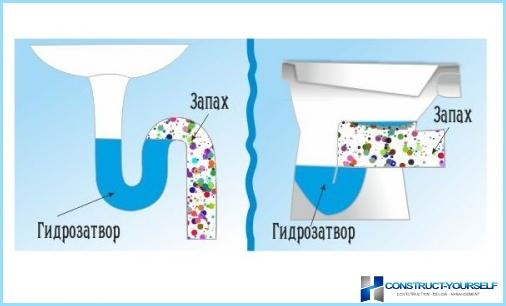 Making sure that the cause of the room of the odor will be in this, need to do a full cleaning of sewage disposal system of special means or a plunger. To install the pipes did not overlap their dirty drains, it is better to pick up a pipe of larger diameter than sewer pipes. 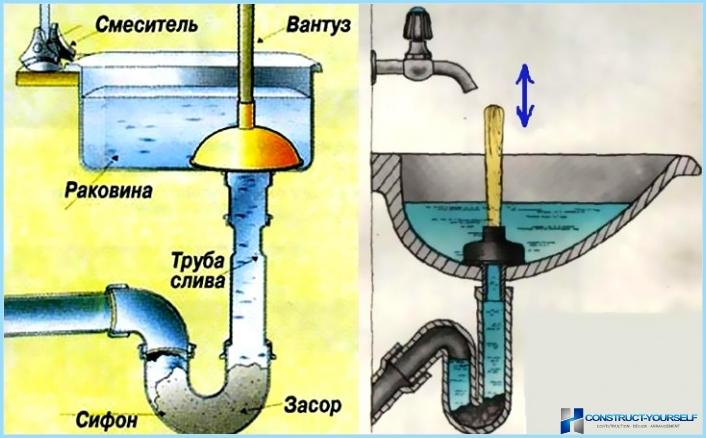 Some apartment owners will often find an unpleasant smell in the apartment, after returning from vacation. In the period of their absence from hydrocofone happened the evaporation of water, this was the cause of bad breath. In order to fix the situation, enough for 15-20 minutes.

Clogging of the siphon or pipe ↑

Odor usually occurs due to the blockage in the sewage pipes, the problems with the siphon. Fall in the trap leftover food, hair, fat, the reproduction of harmful bacteria, there is an unpleasant smell. 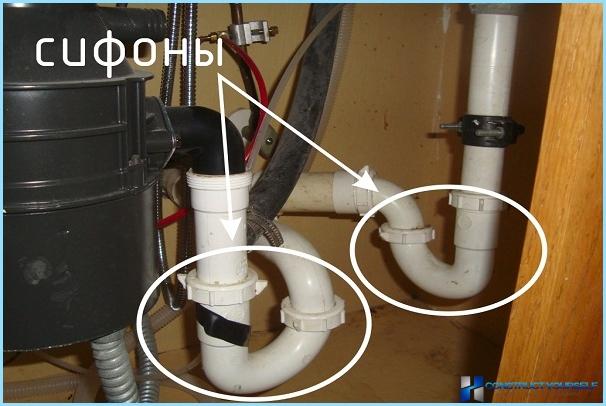 The Council! To ensure that your trap does not accumulate food remnants, over time, not an unpleasant smell, preferably at least once in 5-6 months to complete the disassembly of the hydraulic siphon it clean.

If it is not possible to disassemble the siphon, using a plunger can with the water to perform vertical movements of the plunger. Garbage will be removed by water in the sewer pipe, the problem will be solved.

Because oil plaque that constantly builds up inside, over time, free space in the pipe becomes smaller. The problem is solved with the help of boiling water in which dissolve the dishwashing detergent or a solution of baking soda. For getting rid of a substantial shutter, it is possible to prepare a solution of vinegar. 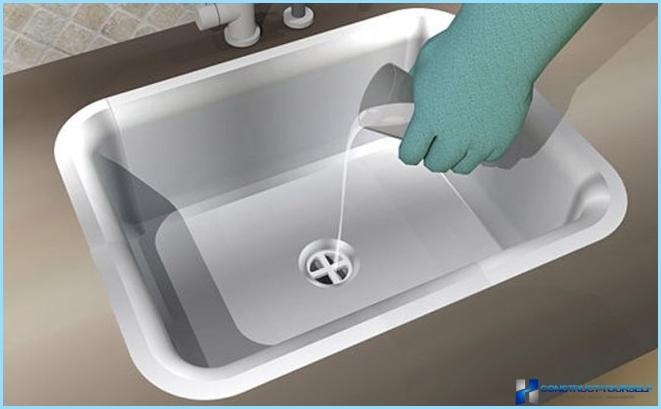 Combating blockage in the sewer system can be solved successfully, armed with a sewer cable. 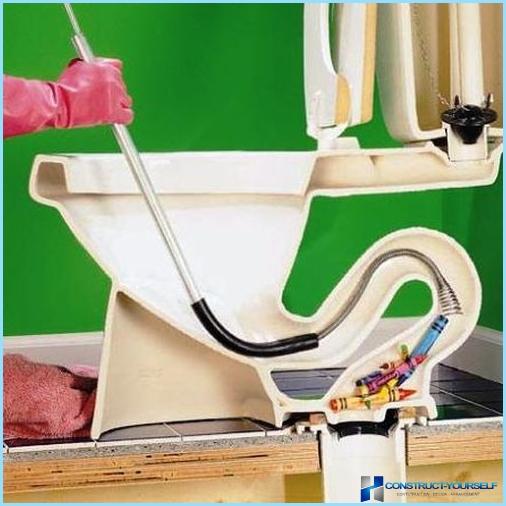 The siphon is removed, the tube is placed a rope, then the pipe neatly push it. The movement of the cable is carried in a clockwise direction, the rope is gradually moved across the pipe. As soon as the rope will fully extend along the entire length of the pipe, drag him out, put the siphon in its place. Further checks of the quality of the cleaning. This ignored the hot water if it does not accumulate in the sink, the problem of contamination is solved completely. To eliminate odors, it is important to systematically check the condition of ventilation, if necessary to carry out its repair, cleaning.