Shower in the country – not a whim and not a luxury. In the heat of summer it’s the only way to maintain health and normal well-being. How successful will shower «room», will depend on the quality of the holiday vacation. 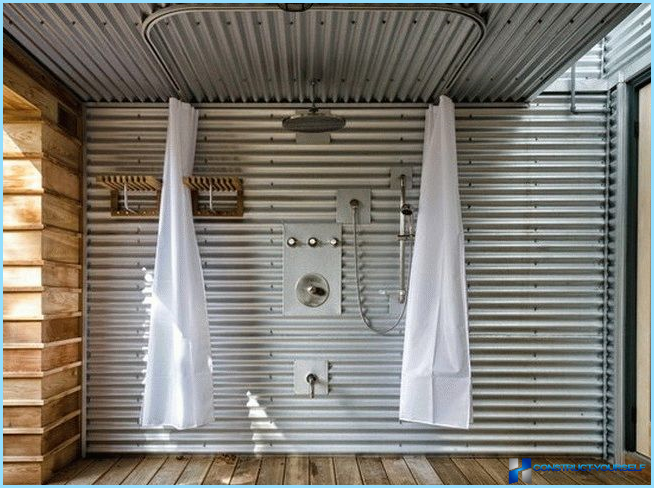 You can just buy a standard shower to give. The budget options of solid blue colored plastic or more like the urban toilets, expensive models too inflated in price. Easier and safer shower for the cottages, made with your own hands. 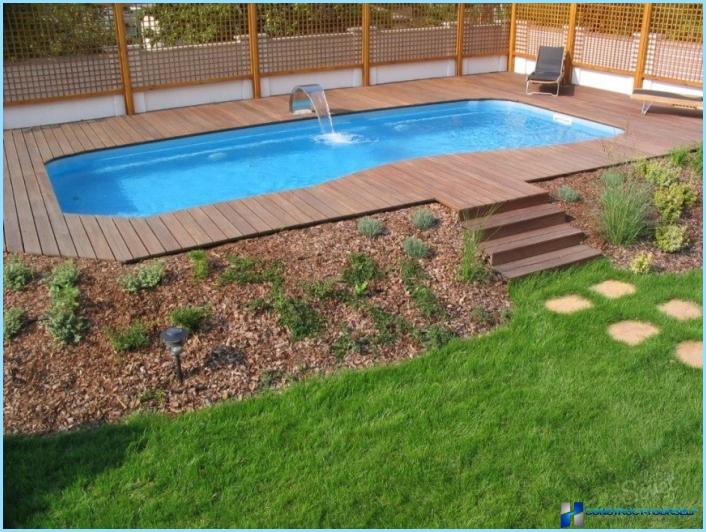 Simplicity of construction in the country should not mislead you. Much to think and calculate. Before you take the job, will have to solve some fundamental questions:

The Council! Not worth it at the cottage to bury a barrel for used water directly under the shower, it usually contributes to the appearance of numerous insects, mosquitoes and midges.

Easier and cheaper to make shower with their hands in the country according to the universal scheme, with individual selection of all nodes and components of the building. Importantly, during the construction it will be possible to take into account the opinion of all family members.

The simple design with his own hands, as in the photo, can be a shower with a curtain mounted on the veranda or in the cozy inconspicuous place villas. 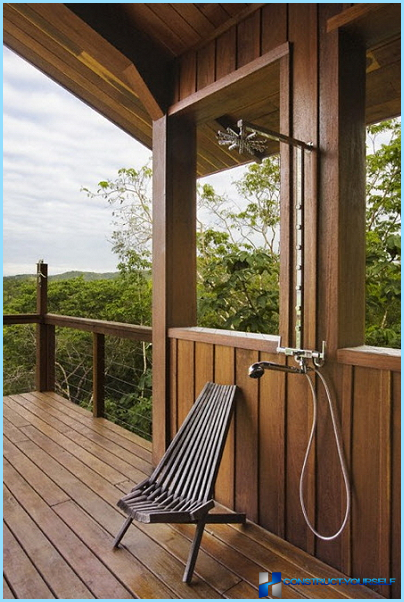 If the structure in the country is no sewer system, as a rule, a shower shall be taken separately from the main construction of the house as a standalone structure. It is less convenient to use a shower at the cottage, but it is justified from the point of view of sanitation and hygiene. Especially in a small-sized country houses is not always enough space to use under the shower.

Build a shower cubicle separate from the premises of the cottages ↑

The easiest way to build a shower in the form of a steel or wooden skeleton, lined waterproof and pleasant to the touch material, for example, plastic or wooden rack. Usually in the presence of the tool and material summer shower for the garden made with his own hands for a day or two. 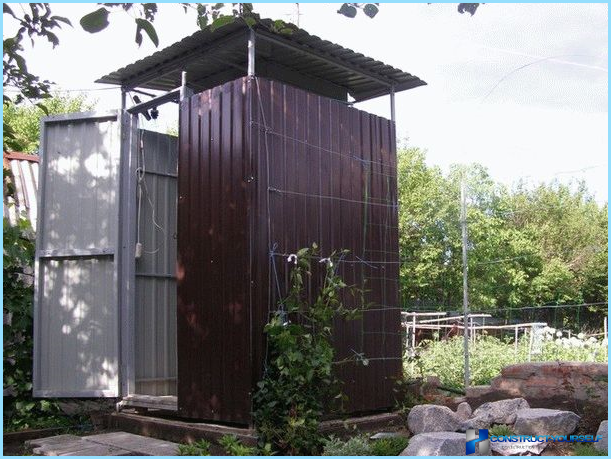 A work plan for assembling a shower cabin ↑

Construction and installation of a shower requires several simple steps:

The Council! The standard rule is to install on the tank or on a separate stand-alone rack, low voltage lighting, or, alternatively, to hang on a hook, the usual travel flashlight with batteries. 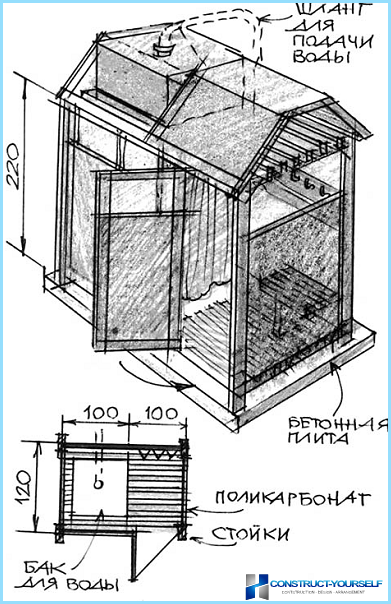 The first priority is the Foundation and tap water used ↑

The collection and disposal of used water is the most challenging. Often in the shower of an apartment or in a private house installed steel or ceramic pan with a drain pipe. Its installation in the shower at the cottage ensures no splashes and puddles in the shower and adjacent to the shower areas.

For a summer shower in the country you can use a similar device, it is necessary to dig a hole and concreted tape frame Foundation. The tube attaches to a right place to collect the discharge effluent. 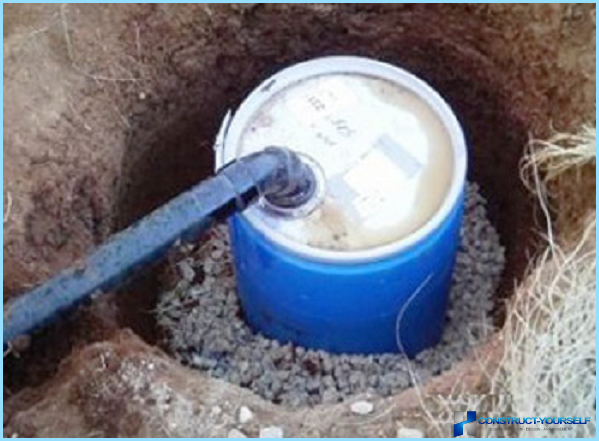 If you have no intention to install a shower pan, you can do the usual wooden shower grid with a base of coarse gravel, as in the photo, but the Foundation under the frame still needs to be done. The exception is the marching variant of a shower enclosure installed and operating on the principle of tourist tents.

The second task – proper Assembly of the frame ↑

If the vertical steel pillars are set correctly, no further work will be reduced to a neat mounting of the transverse rails and the hanging covering the frame of the shower stall facing material. For a normal stiffness sufficient to consolidate the three zones of the horizontal struts of galvanized steel profile.

For the top belt is better to use a steel pipe should be welded to vertical uprights. It will stiffen the upper part of the body. The same belt rigidity of the tube or steel angle is necessary to make the lower part of vertical stanchions, approximately 20cm from the Foundation. 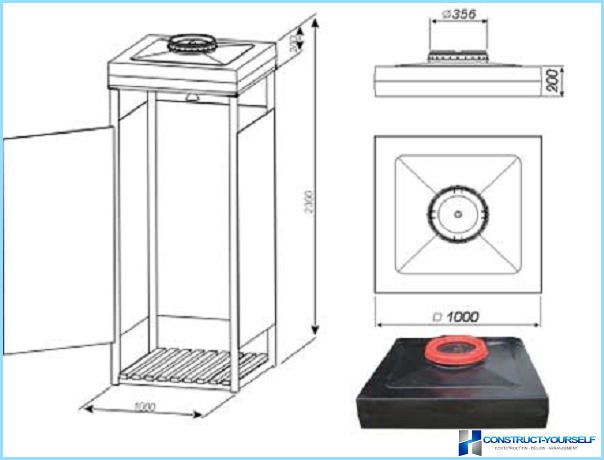 Depending on the scope and design of the water tank it can be mounted directly on the roof of the shower cabin, you can make a separate rack from a wooden bar or steel pipe to install the water tank for the shower. The most popular option is a plastic tank 50L with built-in bottom fitting to connect the shower divider and water tap. If desired, fixed output, you can replace the flexible hose with divider. Usually the tank is mounted on the roof or in a separate rack and fasten the steel tape and foam.

Before continuing with Assembly work, container filled with water, carefully check the reliability of its fastening and a reaction frame of a shower enclosure to the gravity tank. If rigidity is insufficient, it is necessary to weld to the frame uprights with additional diagonal beams, they will provide the strength and rigidity of the skeleton.

Then hang on the frame of the cabin lining. It is better to use a four-foot strips of PVC panels used in the facing of walls in bathrooms and kitchens. The outer part of the lining closed by galvanized sheets or waterproof OSB. 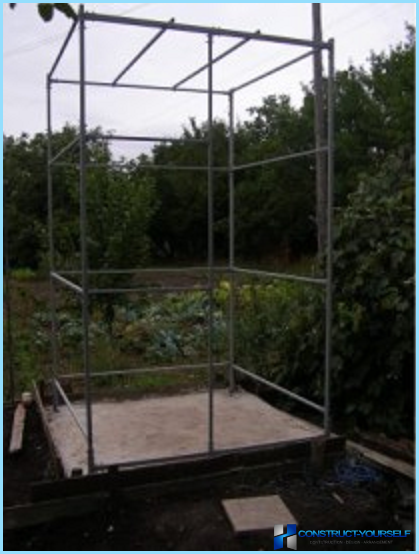 Attach trim using screws to segments of the profile or wooden planks, pre-mounted on a steel frame cab.

The internal arrangement of a shower at the cottage ↑

In addition to shower accessories and lighting in the shower should be installed:

Most often, the space between the roof and the top edge of the fascia is not closed entirely or close to leeward by the glass, or better a sheet of transparent polycarbonate.

Features a shower cabin in the country ↑

When installing a shower cabin in the country should consider its location. Most often, if in the cabin there is no drainage and diversion of water, for reasons of hygiene the very cabin trying to take away from the kitchen at the cottage. In this case, to the installation of a shower at the cottage with their hands to put gravel or tile path, allowing hassle and risk to stain the legs to get from the shower to the house.

To heat or not to heat water ↑

If the summer season lasts until the end of September, and the site has electricity, consider using an additional tank for heated water. Most often in the shower the tank with a supply of water set heating element or a powerful boiler.

It is important! If you have no experience of such work, it is better to buy a ready-made tank with Tena and hold the wire with cross section not less than 2.5 mm2. 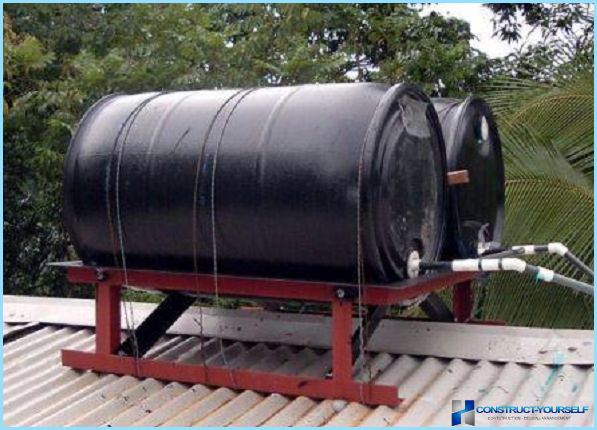 Often, to get rid of the risk of electric shock in the shower for heating water used freestanding steel tank, which and install the heating elements. If preheating is performed only with the help of electricity, the tank teploizolirovat foam. In Sunny hot weather, the water in the shower easily heated by the sun, and an additional tank can be removed.

In 80 cases out of 100 fans of the holiday cottage or acquire fixed shower, mounted directly to the house or collect and install their own hands the makeshift shower. The last option will work out cheaper and easier.