Blind area called the coverage of a certain width, which surrounds the house on the perimeter. Doing this coating at the final stage of construction, after finishing part of the basement. The material used concrete, asphalt, paving tiles. One of the most popular materials is paving slabs. Paving slabs have high strength, frost and abrasion resistance, huge selection of drawing surfaces, colors, different textures, attractive appearance and reasonable price.

Blind area around the house is used for the following tasks: 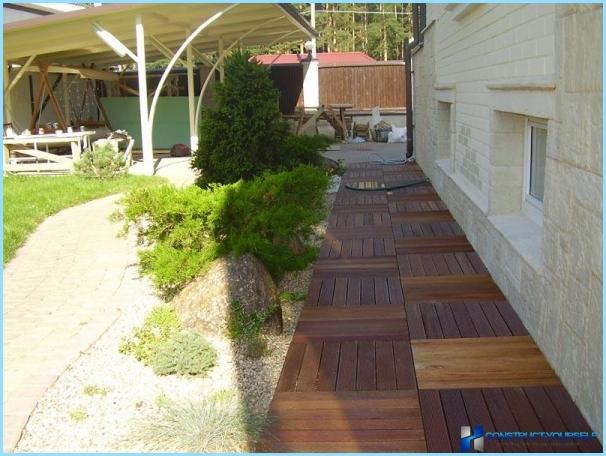 There are some requirements that you must follow when applying the coating: 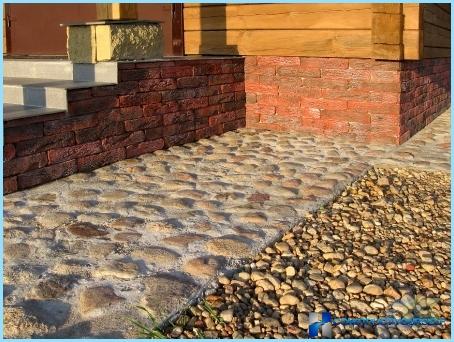 It is important! Structurally, the deck should consist of the underlying layer and the coating.

Work begins on the subbase installation with excavation around the perimeter of the house. For ordinary soils is sufficient to remove the ground with a bayonet spade, but for the heaving will need to remove soil up to 30 cm the Soil is removed with the formation of already slope away from the Foundation. It will be enough to make the slope of 3%. Thoroughly clean the roots of trees and plants.

The trench width should be equal to the width of the blind area. It should be remembered that this width should not be less than 60 cm, while at least 20 cm wider than the eaves.

On the bottom of the trench is laid and carefully compacted clay. In order to avoid problems with the walls of the trench, it is possible to strengthen their simplest forms or curbs. The clay can be replaced by strong waterproof tape. In this case, the film must be equipped to go to the Foundation of the house above the level of coverage.

Then filled with sand, closed with a geotextile, then gravel. Geotextiles do not allow the destruction of the layer of sand under the influence of the weather phenomena. In addition, gravel with geotextile will perform a drainage function, and to take water from «pie» blind area.

There is recommendation to use herbicides to combat the plant. So the grass and plant roots will not destroy the coating. The effectiveness of this method will not speak, but harm the herbicides your site can bring a lot. Water trapped in the ground, they begin their «journey», and no one knows where will end up. It is possible that carrots or apples to your site will contain herbicides, you with your hands made in the ground. Lay on the bottom of the trench geotextile and grass with weeds, the pavement won’t hurt. Securely and without any chemicals.

For paving on a layer of crushed stone should be laid with a thin layer of sand, again pre-Mat geotextiles. The geotextile prevents gravel from clogging with sand, and allow it to effectively carry out drainage function. All layers are performed with preservation of the set incline to 3%.

The drainage channel paving is made from gravel laid in a drainage pipe. The pipe in this case is placed to far from the house edge of the underlying layer. The pipe can be laid near «pie» coating layer at the lower part of the gravel layer. Pre-drainage pipe covered with geotextile. This will allow you to avoid falling into the tube of soil particles and sand will cause clogging. 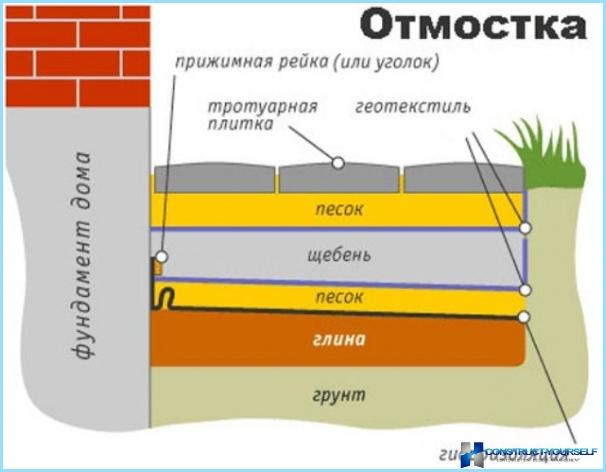 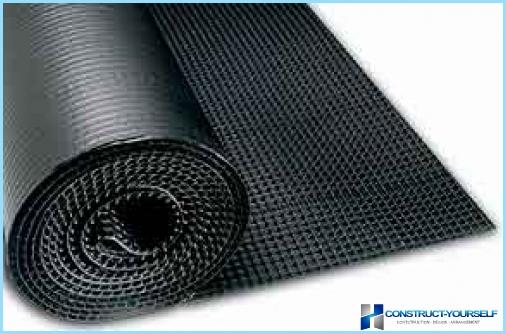 Paving slabs as a cover to lay on a mixture of sand and cement. This composition is called gartsovka. Under the influence of water a mixture of sand and cement will set and will not be leached in the future. This mixture is poured, the joints between the paving tiles. Tiles are laid on the mixture, tamp with a rubber mallet and are aligned in the same plane. Do not forget about the need to maintain the desired slope from the house. After the completion of laying tiles, the remains of gartovka sweep, and the tiles shed water. Around the perimeter of the cover fit curb. The curb height should not protrude above the level of the pavement and thus prevent the flow of water. 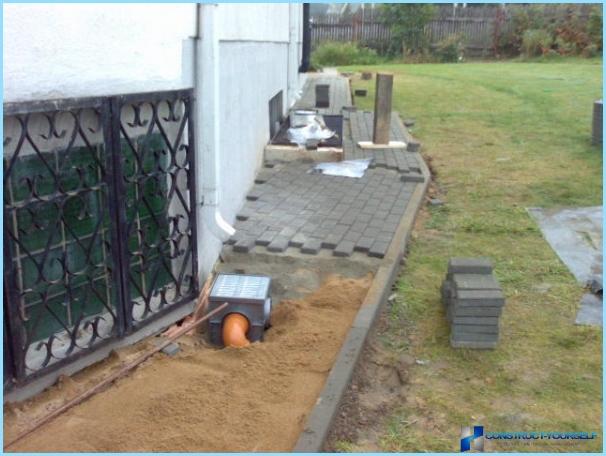 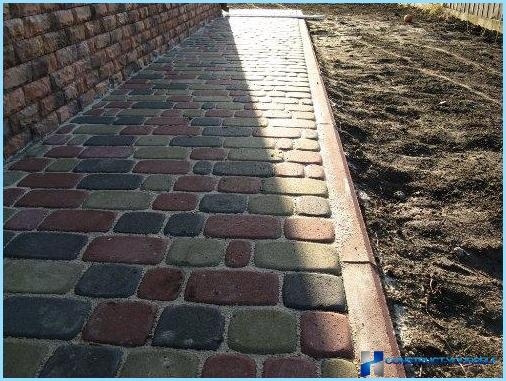 It is very important! Choose a paving of tiles of such size that it was not necessary to cut.

The pavement tiles are laid in rows. The coating should not fit tightly to the Foundation of the house. You need to leave expansion joint. Under the influence of the soil Foundation and the blind area due to different weight of the structure will be different and tight to the base of the tile can damage the material, which faced the basement.

Another advantage of paving slabs as a material for coating is the ability to replace damaged areas without compromising the entire blind area.

The insulation of the blind area, do not in all cases. Mandatory insulation is slightly deepened in the Foundation and heaving soils. In other cases it is desirable. As insulation, it is recommended to use expanded clay or polystyrene foam. The most popular form of polystyrene – PENOPLEX.

The clay layer («clay castle») or soft waterproofing poured a thin levelling layer of sand, over which are placed plates PENOPLEX. Further layers «pie» blind area can be performed, as mentioned above, however, polystyrene is required to protect getrootalias coating. 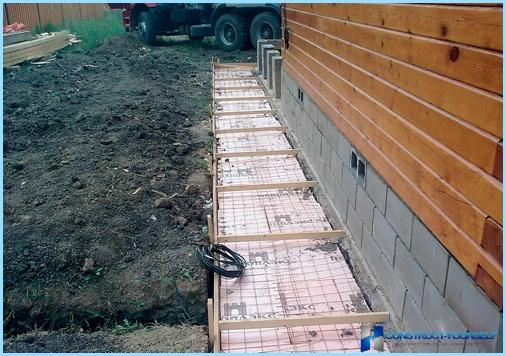 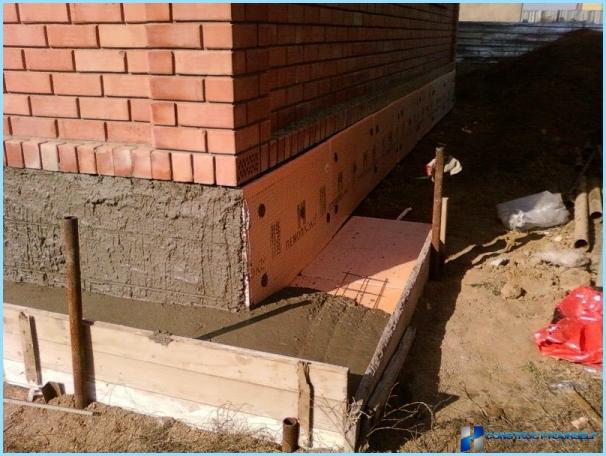 Insulation of expanded clay to make it even easier. It is filled with layers of gravel and due to its qualities, insulates the pavement. 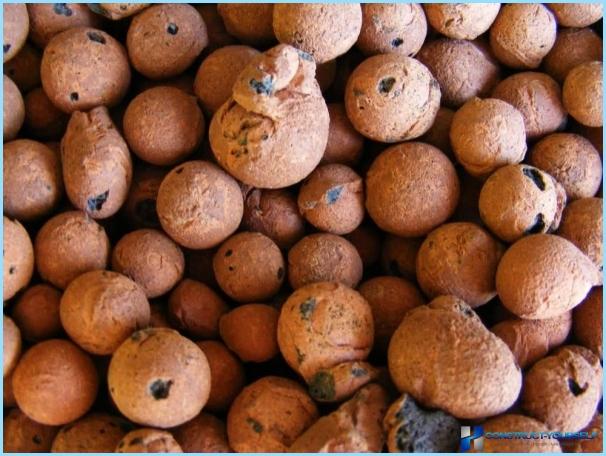 The laying of paving tiles on concrete otmostku ↑

Concrete blind area can be made a cake from «clay castle» or soft waterproofing, sand, which acts as a shock absorber, and gravel. For insulation, coating gravel to be replaced with expanded clay. The thickness of the layer of gravel is 5 cm Concrete cover reinforced with grid with cells 10×10 cm expansion joints, which will protect concrete floor from cracking, are made of thin wooden planks, set on edge across the pavement. Set the plates in increments of 2.5 m. it is Advisable to coat them with bitumen. Timber set to the height of the concrete pavement with a slope from the house. 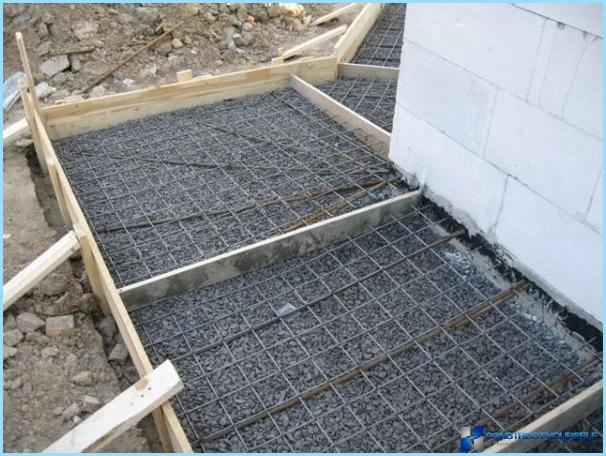 Concrete will be poured. When aligning the surface plates will serve as beacons. The thickness of the layer of concrete when reinforcement grid is 10 cm. 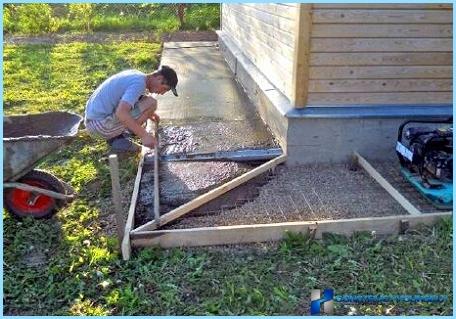 Experts advise salesnet filled concrete having a wet surface cement lining and metal trowel. This method will increase the surface moisture of the concrete. Concrete cover is closed and periodically shed water. Doing so before complete hardening of the coating.

For the construction of the blind area of concrete sufficient to use cement M100, M200 max. Higher brand use does not make sense, including because of the higher prices.

Paving slabs laid on a Foundation of concrete on a special adhesive (quite expensive), gartsovku (this method requires certain skills and experience. Look at «fruit» the work of many teams of workers trying to put the tile in the gartsovka, and then a year later covering requires repair) and conventional wet mortar of sand and cement.

Paving slabs are first decomposed and checked pattern. In places that require trimming, tile is marked with. 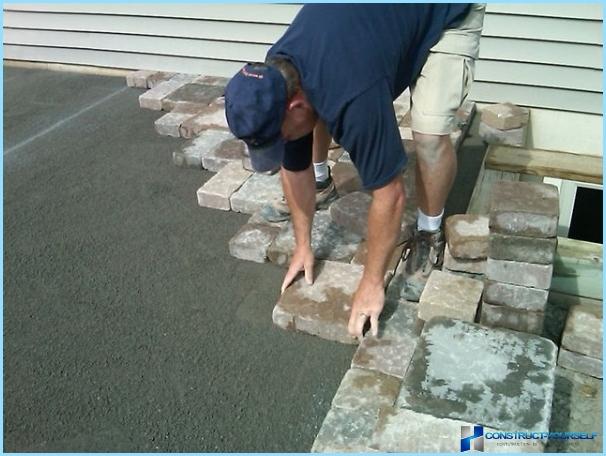 Then the tile is removed and the substrate using a trowel to apply a layer of mortar thickness of 2-3 cm tile is Laid and is fitting with a rubber mallet. 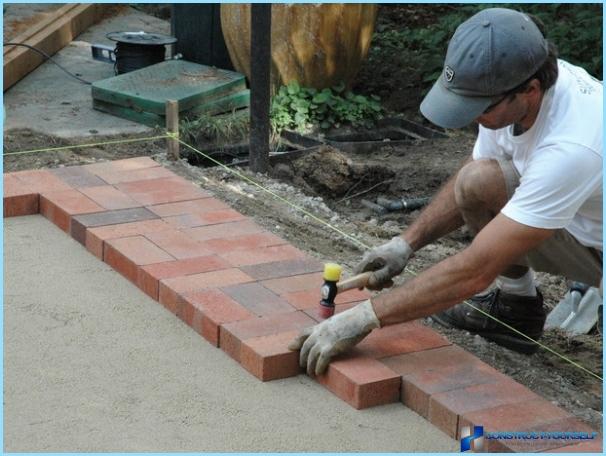 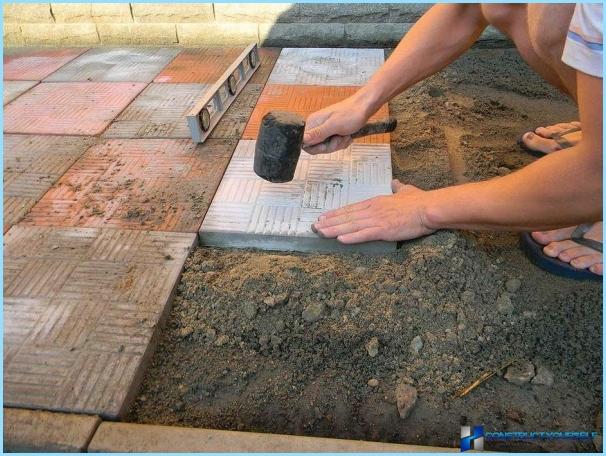 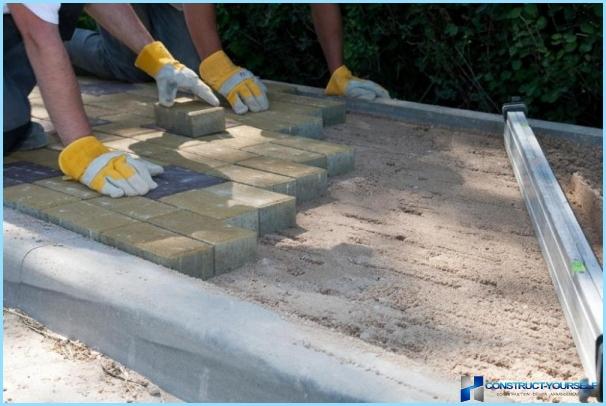 For precise adherence to the size of the stitches used special plastic crosses. It is important to closely follow the slope of the plane of the tile. Let the solution grasp and proceed to grout after 2-3 days. Seams are gartsovka and spilled cold water.

We reviewed the highlights of the device is complicated «pie» of pavement with a coating of paving slabs. Someone decides that it can be easier, but about waterproofing, drainage, expansion joints in concrete pavement should not be forgotten. To a year not to remake. Beautiful and durable all pavings! 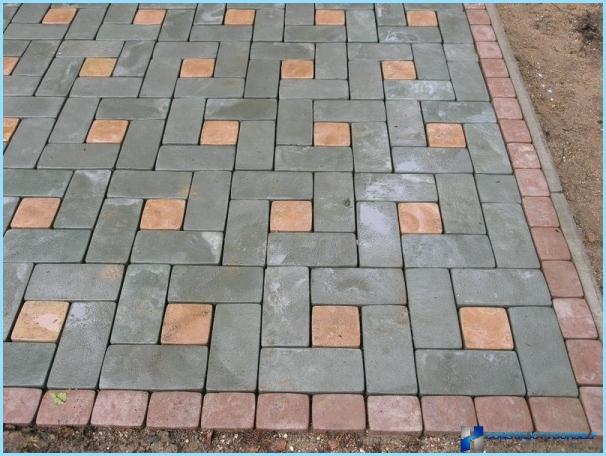