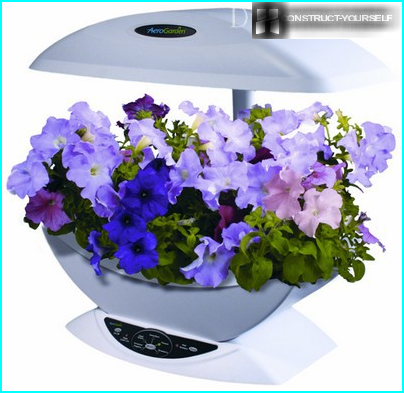 While autumn has not yet spent all of the summer heat, so nice to spend more days outside the city and in nature. Very handy that on the eve of the Catholic feast of all saints Day, October 31 celebrate Halloween. It is famous of its long history: it is believed that on this day, the worlds of the dead and the living combined. But for the majority of our fellow citizens of Halloween – this is a reason to make a masquerade, feast and have fun with friends. It is widely celebrated in English speaking countries. In the tradition of holiday markets and fairs, the bright ornament of dwelling and plot, a joyful feast. Children in carnival costumes sing carols on the night of Halloween, getting candy. It is believed that so you can pay off the evil spirits.

Where did «pumpkin lantern»?

Celebrating Halloween is associated with pumpkins and carved with her awesome face. But not everyone knows that the pumpkin has its own name. Her name is «lantern Jack». But what kind of Jack is it? It turns out there is an old Irish legend about an old hitrate Jack, who was a farmer, or a blacksmith. But the fact that he was a drunkard and a gambler, lowering on the game all their earnings, is known. 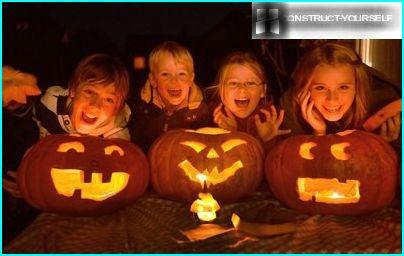 In fact, according to legend, the first lamp, which made Jack himself was from turnips, but in America, pumpkins are cheaper and, you see, she still is much more scenic vegetable 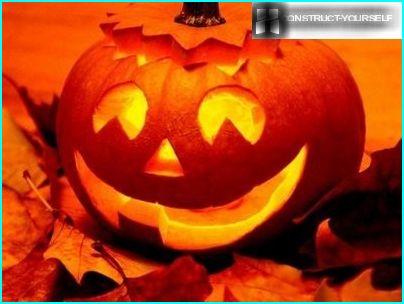 It looks like the easiest, but no less spectacular, Jack. Craftsmen can make pumpkin masterpieces, arranging on this occasion, and exhibitions and competitions

So, he had a chance to chat with the devil and sold him my immortal soul just brew Ales. But the devil he managed to cheat, but not once, but twice. To pay for the drunk Jack, El, the devil turned into a coin, but Jack just kept the money, put it into her pocket, where lay the silver cross. The cross did not allow the devil to take the old form, and to get out of the trap, he promised the wily drunkard peaceful and long life. And the devil said the soul of Jack will never go to hell.

But years passed, and old Jack died. Because of his sins, the way to Paradise for him was closed. Hell it was not picked up as the devil was able to keep his word. Jack had to go to eternal wandering. Well, he had a pumpkin from which it was possible to make a lamp with a coal from the fires of hell inside. Since this lantern lights Jack’s way, and a Halloween without a pumpkin is not complete. It is believed that pumpkin on Halloween lights the lost souls the way to purgatory.

Make a lantern by yourself

Let’s start with choosing the right pumpkin. Rate the place where the decoration will be placed and estimate the size of the vegetable. Pumpkin is best to choose large, round and bright orange. To prepare tools, materials and utensils:

The process of work and the sequence of actions was well-represented on the video that we offer you to look at.

So you can make your own original «lantern Jack», evaluate the proposed ideas. Perhaps inspiration will tell you their own version, different to any other. Will not start with the most simple smiley face, the manufacturing process, which you just saw. Let’s see what else is portrayed.

Note the popular characters from modern cartoons. For example, «The nightmare before Christmas» or «Corpse bride» are those movies that you need. Choose Jack or Frankenstein or any other character, which causes a surge of creative energy. Don’t be afraid to make mistakes! Do the initial sketch with a Sharpie, which is perfectly erased. Try to do without the fine details, then the work will be easier. 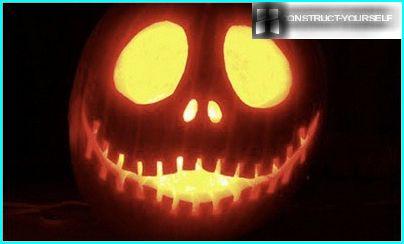 Recognizable character from the movie is very pleasant to children, especially the teenagers. However, Halloween allows even the important adults becomes for a while the irresponsible mischief-makers

Bats has always been a symbol of horror and fear. These emotions are just in tune with Halloween. On the pumpkin cut out their silhouettes. They look spectacular on the walls as a shadow and then when the inside of the pumpkin will burn candles. Silhouettes of bats can be placed on all perimeter of the vegetable and arrange them arbitrarily, and even better to make a traditional scary face. To perform small parts, use a utility knife. 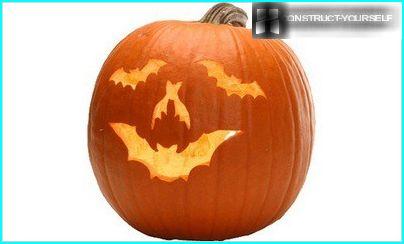 To use the silhouettes of the bats as decor for the Halloween tradition. You can cut them out of paper, sprayed on the plane through a stencil anyway, it’s great

The more characters at this festival, so it is brighter. If you imagine that Jack – o ‘ – the monster imagine it, why not cook up a whole pumpkin battle. Let the monsters come to blows for the right of primacy on Halloween, the strongest will win and the evil. If you buy a small pumpkin can not find work, you can use an orange. Don’t cut out from the large openings. It is better to increase them in the process. 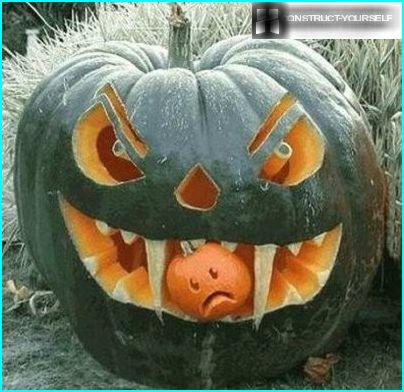 Fight the monsters embodied in the form of hypertrophic pumpkin ceases to be scary, although the little monsters who got in trouble, still a little sorry

To create such «Jakovich lights» you can use not only circular but also elongated pumpkin. So it will be even more spectacular. The image of the lantern, apply to the surface using black marker or acrylic paint and a brush with synthetic bristles. Those parts which in the normal lamp is glazed, you just need to cut that through them came the light from the candles placed inside. And easy and effectively! 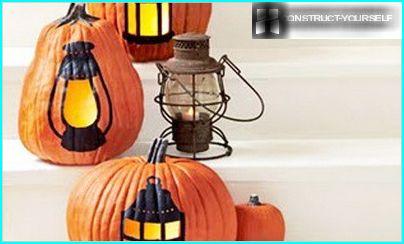 Image of flashlight can be very diverse. You can change the shape and color of pumpkins. So the lights of Jack be unlike one another, but all are interesting

Halloween – autumn festival, but winter is coming, and after her will come the New year. Why not think about it right at the end of October? Take two pumpkins and will make them a good Jack. Let balances the forces of evil and not let them into the house. Pumpkin «snowman» you will need a hat, some large button-down collar shirt from junk or neckerchief, a cork from a bottle of wine, pen and pins. Good face cut-out the smaller the pumpkin, the tube will be instead of a nose. Shawl neck and buttons secure with pins or glue. Eyebrows and pupils can be represented by the marker. Let standing at the gate or at the entrance of the house Jack meets guests. 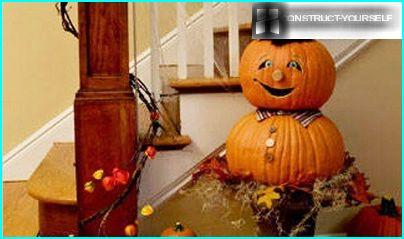 Funny Jack in the pumpkin snowman does not look scary or dangerous. He guards the entrance to the house, letting in only those whose intentions are pure

So, quietly moved to the street, we come to the decoration and the site itself.

Illuminated garden for the holiday

A special occasion requires special lighting. To make it easy, much more difficult to choose one of several most attractive options. However, you can even combine a few ideas, placing the lamps at different corners of the garden. Several plastic containers, markers, and candles, which are inserted inside, and the first funny lamps ready.

There is an idea to make the lights using empty cans. Before working in a Bank to pour water and freeze it. This is done to make it easier to fulfill his plan, not xplosiv jar in the creative process. Capacity draw the figure and punched it with a hammer and a nail through. Remove ice, remove the traces from the marker, and the Bank should be painted, giving it a orange, black, Golden or any other color. Left to place a candle inside and place or hang the banks. 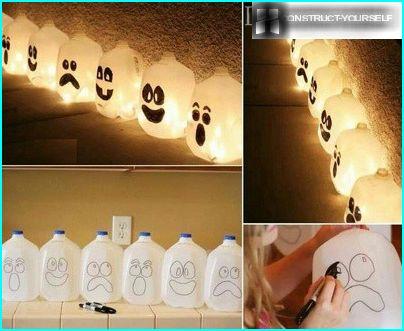 Ghosts from plastic bottles can be very amusing. They effectively are placed along the walls of the house and create a special festive atmosphere 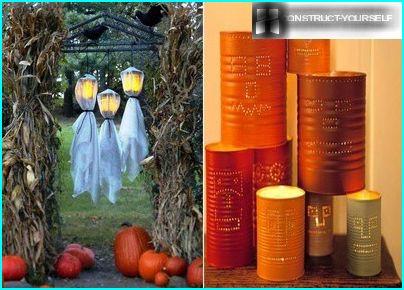 Although the first version with the arch and ghosts is still more picturesque, but preference should be given to safer lamps out of soda cans. They are also able to delight the most discerning critics

If the garden is already lighting in the form of, for example, lights under the arch, the arch itself you can decorate with twigs, cattails and reeds, and the lamps cover white transparent fabric, tying black ribbons in the area of the throat resulting «ghosts». Should most attention be paid to measures of protection against fire. Make sure that the fabric is not heated. Dry grass and leaves burn like gunpowder. Therefore, it is better, if not so beautiful, but safe.

Decorate the trees and lawn

Cute and completely safe casts may find yourself in the trees or on the lawns. Lightweight fabric, markers with markers and balloons is all you need for creating fun company of ghosts, who decided to play in the branches. If the soil on the lawn to stick the sticks about the same length on the free end of which is to put jars or pots, you get the Essentials for a playful circle of ghosts. 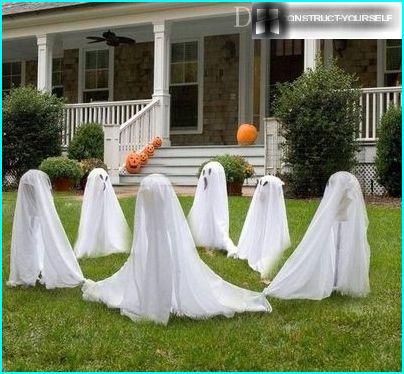 No special effort is required to create such an original dance of ghosts, fun, entertain right on the front lawn

By the way, there are horror stories, which will also serve as great garden ornament. For example, skeleton, sleeping in a hammock, responsive to approach of the person with a gesture or sound. No scary young skeletikami plastic, you can decorate a normal Christmas garland. Placed between the trees, it will not be brightly lit, but the atmosphere will create.

Final touches: the entrance to the house

Traditional wreath that before the New year adorns the door of the house can be changed to the black mourning bow, but don’t forget to decorate it with glitter. Even a bundle of straw or a wreath of black crow’s feathers would be welcome. Black, orange, Golden yellow, bronze, white and black are the main colors of decorations. Decorating the front door or a blank wall at home, will Express their imagination to the full. 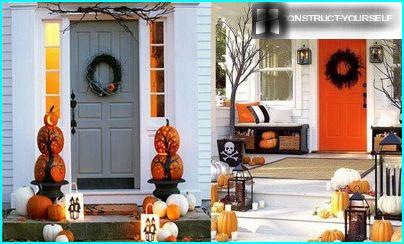 Both of entrance is simply stunning. Can only envy the guests who will see all this beauty and splendor of reality

The imagination of a creative person is limitless, but it’s important to stop and show a sense of proportion without losing a sense of humor. After all, Halloween is mischievous and fun holiday, when people laugh at their fears and not plant them. 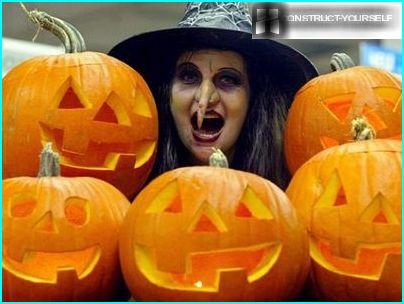 To Halloween to see a real witch, you need to wear clothes topsy turvy, to go out at midnight to the street and go backwards

The garden got its share of funny decorations. Everyone who will look at the house and the grounds outside, will appreciate the efforts spent for the creating a festive atmosphere. Left to surprise those who will be invited to the house and to the table.