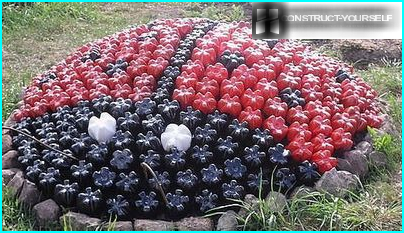 Have you ever noticed how quickly small children learn all the gadgets that fall into their hands? With the console or phone will already understand a two year old child, and sentenced to three years for them managing tablets. Just a doll or simply a machine – it’s ancient age. Kids like mobile, able to move, to speak, to sing or to give the music thing. And if such a Prodigy can bring to the country and put in the regular sandbox, it will either draw you to establish at least some kind of game or will go out 10 minutes later in search of more interesting things. We chose the most creative ideas for a Playground that will help the child take at least half an hour, so that you can relax to drink coffee or to work in the garden.

Playing alone: what to do with one baby?

All the ideas, which we shall discuss below, is designed for children from 2 years. Before this age you can’t leave the baby even for 5 minutes because it has not yet developed a sense of danger, and every stone, step, or decorative fence can cause injury.

About the basic attributes of the Playground (sandbox, Playhouse, swing) was written in separate articles, and now focus on more unusual, but not too sophisticated in design elements. Let’s start with the ideas designed for games one child, after all, in modern families, unfortunately, this phenomenon is much more common than 30 years ago.

«Easel for drawing»: remain intact in the walls of the house

The desire to paint children almost instinctive. Bad lying pen or marker immediately appear in the hands of the young artist to decorate a house in those places where parents are not even planned. To prohibit this activity 2-3-year-old Tomboy – what to hit the wall peas. But, you can dim the desire, if you create the Playground a kind of easel. Better to let your Malevich off on the street than surreptitiously draws on the walls.

To create the easel will need a stable wooden frame (as in portable blackboards) and the material on which the child will draw. The easiest way to do it from a piece of tin, paint in a dark color and supply a toddler with crayons. You can also use black adhesive tape. It draws white chalk. But there is little danger: kids love to chew on crayons, so this easel is better to do for children from 4 years. 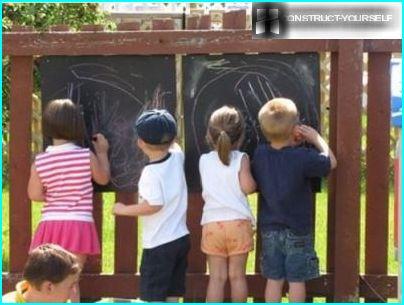 Nailed to the fence, a wooden shield, covered with the top film, will captivate kids for a long time, especially if you offer them crayons and a water hose for rinsing of arts

The second option is to install in a plexiglass frame in which the child will be able to paint with watercolors. True, the tune that you have to wash the Board, and artist. But, again, this easel is designed for children from 4 years. 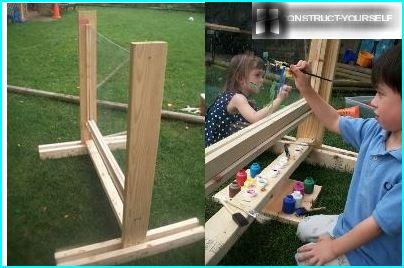 On the glass easel can simultaneously draw two different sides, not only watercolors but also palms

And for the youngest we recommend to nail on the wall, a huge canvas from a fabric-raincoat fabric or leatherette (always in dark colors!). Buy the kid the thickest brush and teach you how to dip into a basin of water, and then draw on the original poster. If you do not want to use the walls of the house, take two pieces of thick plywood, upholster the outside with a cloth and connect one side of the corners for furniture to put the easel in the form of a house. The kid can paint on both sides. 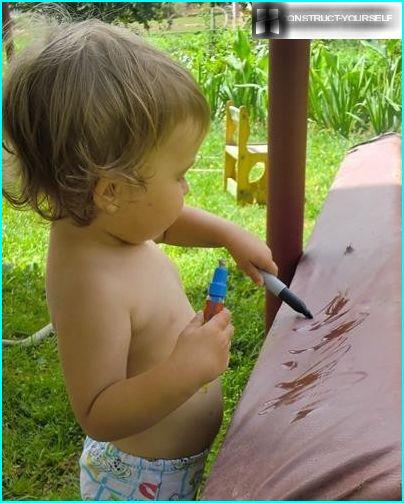 If you give the baby up the pen, drawing water, then the easel can serve as any surface, ranging from old sofas and ending with the tiles on the tracks

As a fixture for drawing may be an old marker. Remove the rod, fill the hull with water and first water sign pen somewhere on an old newspaper that came out the remains of paint. When she starts to draw water to give to a child. Let him do. 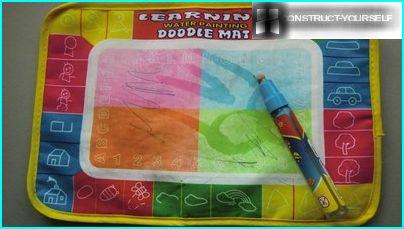 The idea of drawing water is widely invented by the Chinese, and the easels of mantle tissue can be mounted on the street as they are over 2 meters wide 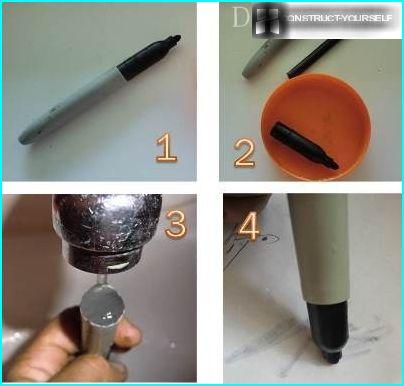 Scribbled marker may become the prototype of the Chinese water handle, if you remove the rod, soak the tip to rinse off paint residue, and a bottle to fill with water

Splash around in the water like every kid. But to leave him alone in the pool or basin of water not. To take the child for a time, not really looking out for him, create a water stand. It requires a framework, like the wooden walls, the grid-rabitsy, etc., to which you will fix the capacities of all sorts – bottles of juice and shampoo, plastic jars, cups, etc. In the bottle cut the bottom and attach to the stand upside down and the tubes blow a couple of holes. The child will pour the water on top and watch as it follows the rain. At the same time will develop the coordination of movements, because to get running water into the bottle, desired precision and a certain concentration. 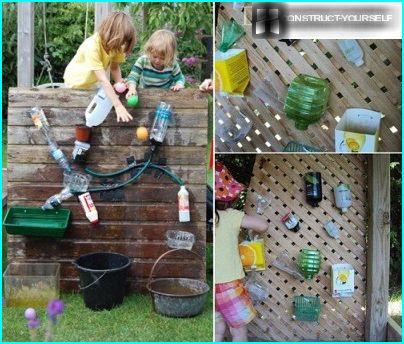 For older children the attributes on the water stand can be mounted in several tiers, but the kids quite a number on their lower back

The idea of resettlement areas for several children

If a family has two or more children of similar age, for example, when you come to Granny’s grandchildren all, they need to take to avoid rivalry and accidental injuries. For example, a slide or swing for multiple kids – a very dangerous projectile. The desire to sit there first, every child will push others, and it could end in a universal cry. Why embody such ideas of playgrounds in the country, which involve cooperative play.

Radio controlled cars today is almost every boys cadikovska age. And also a bunch of robots, helicopters and other equipment, which is necessary to find application in the country. Interesting idea for a boy’s Playground is a car town. It needs a flat, preferably elongated site, divided into lanes (to arrange a competition who will faster reach the finish line). If there is a long platform, use the form of a circle or oval. 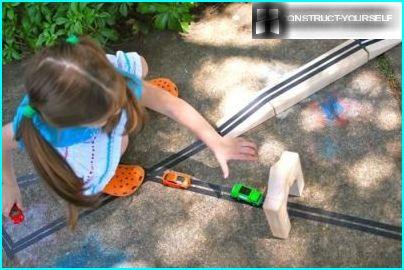 The edge of the site can be closed with decorative fence (very low, so children do not stumble upon the game, but the cars not off the road). Near the track make the trestle from well-sanded boards and steep descent, where young drivers can start their cars and watch as they swoop down at speeds down. 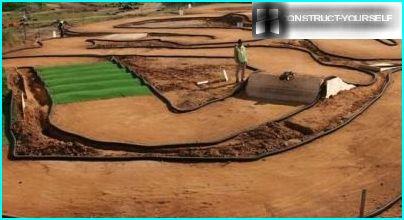 Car towns for radio-controlled cars have already appeared in some cities, but you can recreate it within his garden

Area for girls: the idea of a secret room

If in the family some girls, you can implement for them on the Playground the idea for the secret room, the design of which is simple enough. It is necessary to create in a secluded place, for example, under the old tree or under the balcony (if on the ground floor) enclosed space with curtains. Girls love to talk and play, hiding from everyone, but to themselves to see what is happening around.

Around the tree curtains decorate so: dig in around the perimeter of four columns and pull them on fishing line or wire. The fabric hung on pegs. Under the balcony is even simpler: driving on the edge of the niche two nails, stretched rope with hooks on it – tulle. Inside will certainly sketch of old blankets and pillows that it was a place to sit, and I put a box with their favorite toys. 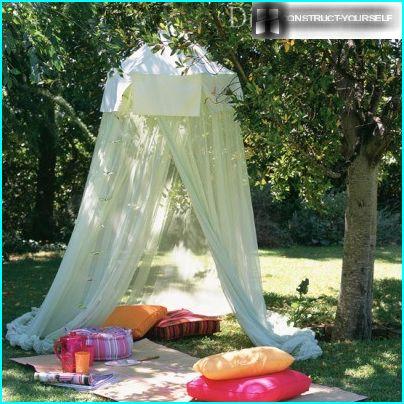 Secret room for girls you can create like a boudoir, hanging tulle to a thick tree branch with a special round fastening with hook

Group fun for kids of any gender

No matter how times change, but the game of hide and seek and cops and robbers are still popular among children. These fun titles, but the point remains: someone hides, and someone is looking for, or one runs, while the second catches up. To organize such a collective game, you need the appropriate paraphernalia and decorations in the Playground. To implement this project you will need black tape, wide Scotch tape and a lot of wooden stakes. Easy to create a huge maze inside of which children can hide. Film is usually sold by half meter, and this height is enough that the children didn’t see who for the next wall. 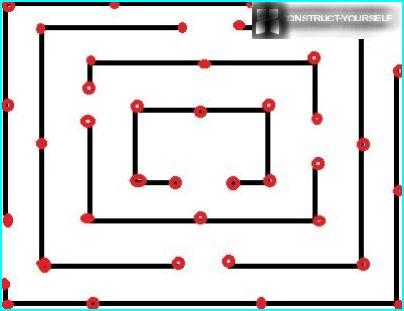 In the diagram, the black color shows the location of the film, the spaces are places of egress, and the red dots are the support posts of the children’s labyrinth

If the film doesn’t manage to find, can sew wall with old sheets, bedspreads or tissues from a grandmother’s chest, locking them to the tree construction stapler.

I hope that these ideas will help you organize the rest of children in the country is interesting and unusual.