Plastic water pipe long ago came into our life. A fixture in the repair of Soviet housing, along with plastic Windows, was the water supply system of polypropylene pipes. 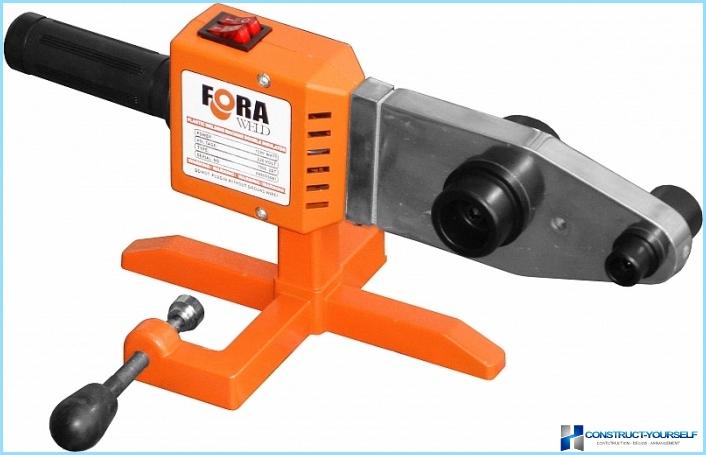 The advantages of polypropylene water pipe before the steel pipes are obvious:

Those who are faced with a tedious and time-consuming plumbing installation of metallic pipe, can appreciate the simple connection technique of plastic using a special soldering iron for polypropylene pipes.

If it’s time to repair the apartment, a problem with the replacement of plastic plumbing utilities, depending on the availability of desire, money and free time to solve:

Ease of Assembly soldering plastic so captivating that it is difficult to resist the temptation to solve the problem of water supply not otherwise, how to choose and buy a soldering iron for polypropylene pipes. The amount of money spent on the purchase of the instrument will be less than the cost of the services of the wizard, but provided that you really know how to choose a soldering iron for polypropylene pipes. In fact, soldering iron for polypropylene parts and fittings is a heating element with thermo-mechanical or electric heating controls and display. On the heater are mounted two nozzles, allowing to heat the soldering iron the outer surface of pipe and inner surface of the fitting. Heat lasts an average of about 5C, details connect with slight pressure with your hands to grasp and the formation of strong connections over 2-3s. In case of overheating or krivobok connection parts may contact with part of the melted plastic inside the pipe, as a result, reduced bore. 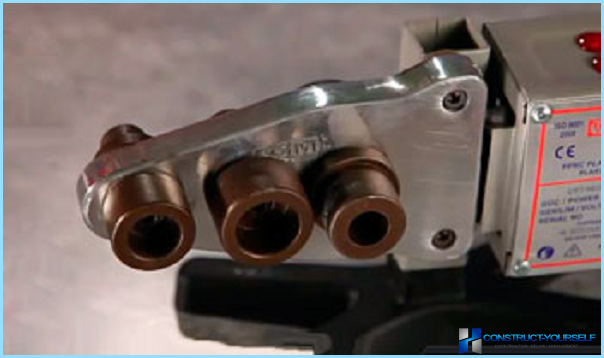 Than a good soldering iron, assembled with his own hands ^ a

The principle of operation of a soldering iron is simple and uses the principle of sticking heated to the softening temperature of the soldered surface of the polypropylene parts. Not always there is a need to re-ReWire or resolder half of wiring of water supply networks in the house. Sometimes you need to work with a soldering iron for two or three connections. In this case, can help out home-made, hand made mini soldering iron for polypropylene pipes improvised from heater.

For a person with experience with electrical wiring and plumbing skills to produce small Amateur version of the soldering iron for polypropylene pipes – a matter of two hours.

As a rule, water pipes laid in channels and hidden from the eyes of a stranger screens and decor, so do not worry about the beauty and aesthetic form. What is more important – incorrect adjustment of the temperature and overheating of the material of the pipe or fitting, under even a little stress will lead to marriage. In soldering the first and main issue is the quality of the connection details.

If you are working on a homemade soldering iron can be slightly not make it to world standards of appearance – not a problem for Amateur cases permitted.

To build a homemade soldering polypropylene pipes will need:

In addition to temperature, important speed or power of heating the surface of the parts. If you heat polypropylene fitting or pipe long enough – parts exposed to the temperature being out of shape and dimensions.

Therefore, to quickly melt the surface with a diameter of 15-30 mm, the necessary capacity of 700 – 900 W, which corresponds approximately to the maximum power of the heater iron. 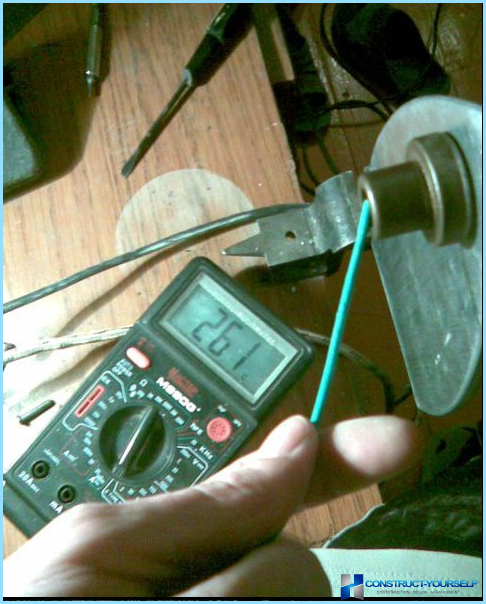 Use a clamp for fixing a homemade soldering polypropylene pipes, which will allow to solder the parts on their own, without an assistant, the handle can also be done under the greatest convenience and minimal risk of a burn. 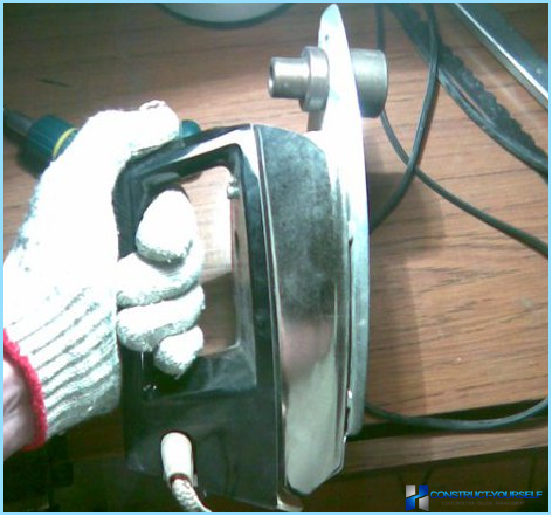 It was always considered that the best tool is the professional version designed for long term use and having high performance soldering polypropylene pipes. Professional soldering tool for plastic pipe includes:

Essential attributes of professional models of soldering irons are easily removable stand and storage case and to carry the device with accessories.

Note! The original models of soldering irons, in contrast to counterfeiting, marking and information about the model is applied typographic way the housing or on a metal plate substrate, tightly sealed in plastic. On the fakes labeling pasted in the form of a metallic label and is easily separated from the body of the soldering iron.

For example, is widely known variant soldering iron for polypropylene pipes dytron or ditron – as you like. He gives high marks for reliability and ease of use, simplicity and robust construction. When soldering parts propylene the second is, we have to put quickly, drop or even throw the linstock on the stand, and it practically does not affect its performance. In the line of DYTRON three models: The soldering iron attached key for bit changes, which can be set from 3 to 12, scissors for cutting polypropylene tubes, construction level, gloves and stand. With all the advantages, it is worth noting one negative thing – obviously inflated price of a soldering iron.

It is important! Such devices are designed for long hours of operation, but in any case, require careful care, non-stick coating on the nozzles. Teflon is very sensitive to scratches and chipping, therefore it is not necessary for cleaning, in addition to rags, to use hard or metal objects.

But even the experts involved in the soldering of water pipes do not always want to buy a soldering iron for polypropylene pipes in an expensive professional version. Many of the budget models collected from Chinese and Turkish components work perfectly is not worse than branded models.

Power cord length is 130 cm, which is clearly insufficient for the job. But this size is typical for budget models, while professional soldering irons have a full 2.5-3.5 m. «Union» equipped with a dual mode push-button heating controls and the two color indicators – green and red, the latter illuminates of heating automatics. 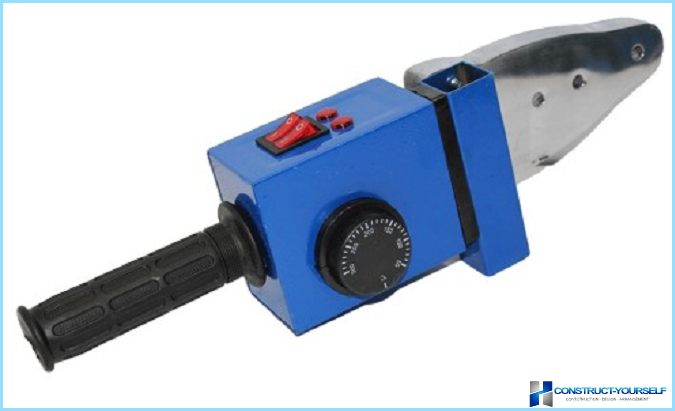 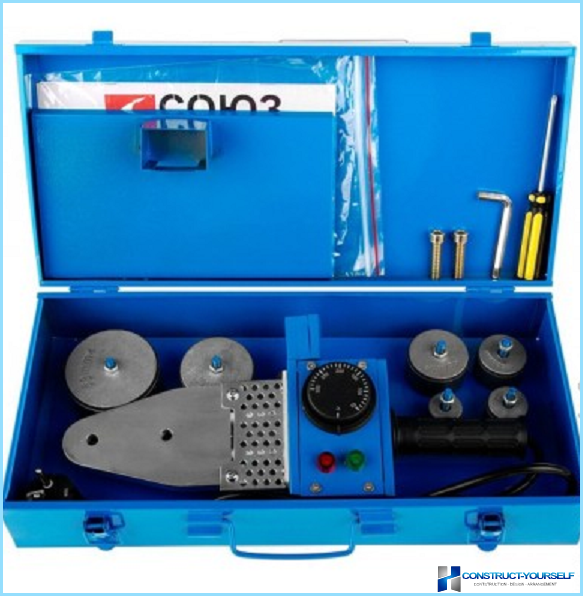 A soldering iron equipped with everything necessary for successful soldering polypropylene pipes, so it’s hard to say – whether to overpay for the accessories, as in the case of expensive models of soldering irons.