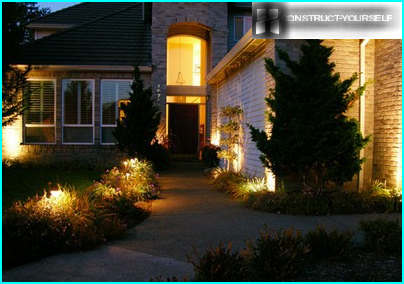 The well at the cottage sometimes the onlysource of drinking water and want to see the quality of the water in it was good. Therefore, already on the water searching step is to know at what depths the best are located aquifer veins. To reach them, you have to explore the entire site and choose the most opportune place. Consider as well for water to various methods.

Location of aquifers in the ground

The water in the ground is retained by water-resistantlayers, which do not start it or on the surface or more deeply. The main component is a clay layer, which is highly resistant to moisture. Sometimes there are stones. Between the clay layers is a layer of sand, clean water retention. This is the aquifer, to which should be reached in the process of digging a well. 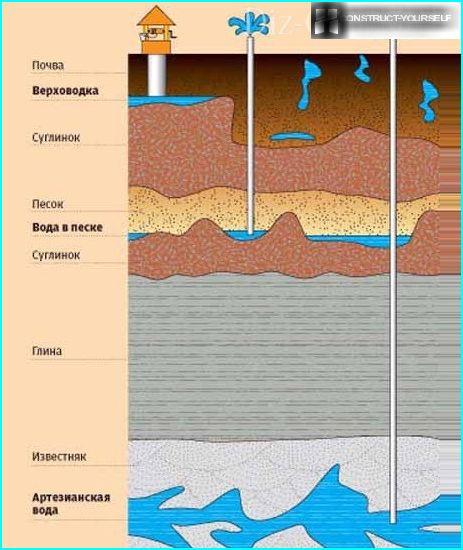 In some places, the sand core can be thin, inother - huge. Most large volumes of water in the obtained field cusps impervious layer which is not exactly horizontal, but with the differences of heights, bends. And where does clay distortion, changes the direction of height, it produced a kind of breaks that are filled with wet sand. These places are so saturated with water that they were called "underground lakes".

How does the quality of the water from the depths?

When digging a well, you can stumble upon the aquifercore very quickly - 2-2.5 meters from ground level. Of these aquifers for drinking water taking is undesirable. Due to the proximity to the soil surface in the core penetrate the top of water rains, melting snow, sewage, polluting the water and significantly reducing its quality. Specialists such superficial veins are indicated by a special term - perched. Moreover, these layers are not stable enough. If the summer is hot and there is no rain, water from lakes verhovodnyh disappears, and hence the well it will be gone. So is the "peak" summer vacationers can stay without water, and until the autumn. 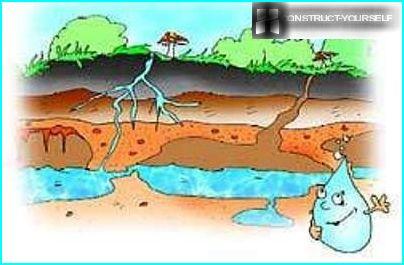 The optimum depth, which should leadSearch for water wells - 15 meters. At this depth, the line passes continental sands, host very large volumes of water. A considerable thickness of the sand layer helps to maximize cleaning aquifer veins from all kinds of garbage and "chemistry."

To find water, not necessarily invite specialists. For many centuries people in villages treated on its own, using the observation of nature and animals.

Observations of the mist

During warmer months, in the early morning or late afternoonInspect the area. Where close ground water near the ground fog is formed. And you can determine how deep the water-bearing vein is located on its consistency. The thick fog - the water closer. Mists caused by rising moisture from the ground, do not stand still, and come out clubs or trail in the soil itself.

Animal behavior in the heat

Field mice will not make nests on the ground, if the water is close. They will carry their homes on tall plants, branches of trees.

If the owner has a dog or a horse, in the summer,when there is a cake, it is necessary to observe their behavior. From the horse's thirst begin to look for water in the soil, and to beat a hoof in a place where the highest level of humidity. Dogs try a little "knock down" the body temperature, so dig in wet areas of the pit and take refuge in them. The moisture evaporates and cools the earth, animals and therefore tend to settle down in these points. 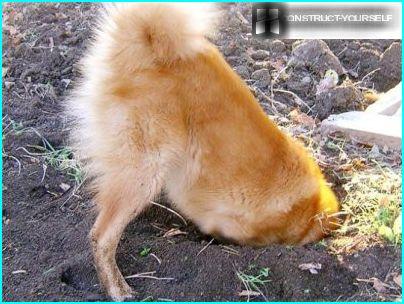 Poultry is also a good indicator. Chicken is not carried wherever feels the proximity of water, but the goose specifically chooses the place where the cross-bearing veins.

In the evening, when the heat subsides, you can watch and midges. They begin to get off in groups to form "columns" of the most humid area places.

The range on the site indicator plants

It has long been on the depth of the aquifer,person informed of the plant. Moistureloving will never live in a place where the water is very deep. But if the country is rampant in full mother-and-stepmother, hemlock, sorrel, nettles, then the soil moisture is sufficient. 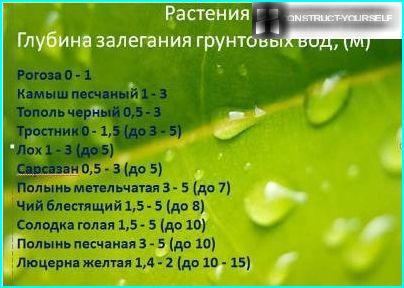 By growing plants in the country, you can determine at what depth passes water-bearing vein

Alder, willow and birch trees grow well in wetsoils. If they krone tilted to one side - so there should look for the aquifer. Never will grow well in areas with similar levels of ground water apple, cherry. Fruits are constantly rot and wood - rooting.

In addition to observations, to search you can use and different devices. Consider how to find water wells by using the items.

In the morning will put the same throughout the sitevolume glass jars, turning their necks to the ground. The next morning, check in what appeared condensate. What it is, the closer the aquifer.

We waited a couple of days to no rain fell, andthe soil became dry. Take a dry salt or crushed into small pieces of red brick, poured into an earthenware pot (unglazed). Weigh, record evidence zamatyvaem all in gauze or spandex and buried in the ground two feet. After one day pull out the pot, remove the material and re-weighed. The greater the difference in weight, the closer the water-bearing vein. Incidentally, the modern approach vlagonakopiteley and silica gel. 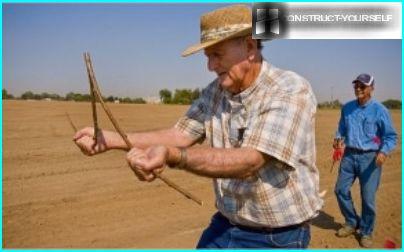 Vine and aluminum give a signal that the ground waterIt is, but it may be perched, which is not suitable for the well. So after finding places with high humidity Preliminary drilling in order to understand the depth at which the aquifer is located.

The process of exploration drilling