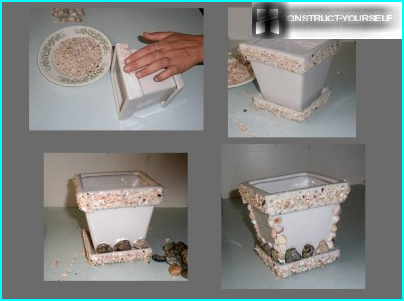 There are on my site, one feature – a stream, flowing from farm fields. In order to fit it into the surrounding reality, and to ensure safe passage through it was spanned by a bridge. He was made of wood 10 years ago, so already rather rotten and has lost its former strength. Like from the side and looks organic, but go on it scary. And kids to blow even more! So I decided the old bridge to remove and build new – from metal. A detailed description of this construction I would like to submit for your consideration.

I immediately decided on the design of the new buildings – the bridge is curved, with curved metal handrails, and wood flooring. Found a drawing on the Internet, a little altered under the existing realities. Then, in the course of the case, some profiles were replaced by others, varied sizes. But overall the project was a worker and was implemented. 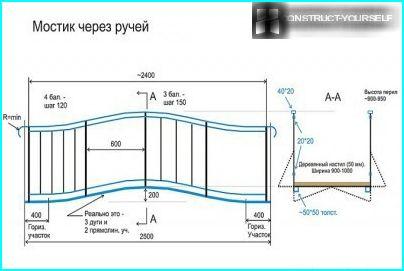 The design of the bridge working drawings

Step 1. Reception of workpieces and the welding of the sides of the bridge

Bent part of the design was commissioned from local artists. Unfortunately, they were not entirely responsible, so some of the details I had to bring to mind yourself. About this I will mention later. 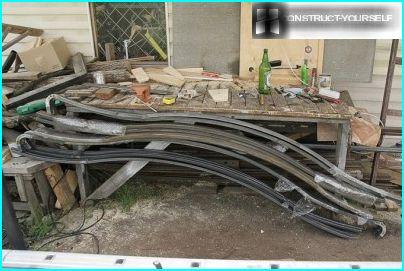 So, got the parts, unloaded. For handles I picked up 4 arc similar in form. It was not so easy – they are all different (thank you, «masters»!). The bench at such designs since I don’t have to cook the sides I started on the paved Playground.

Just spread out the arc and upright on the surface, horizontality achieved by putting them under various pieces of wood and plywood. Turned out to be quite convenient. Checked by a laser level, all straight, no «screws». 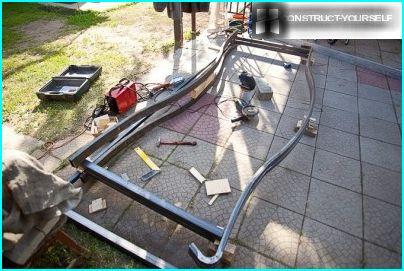 The compound curved handrail with vertical posts (by welding)

The first side is welded, then on top of it laid out the elements of the second side and also connected them by welding. The lower part of the supports of the bridge will be under ground, it is clear they will not, therefore, these parts I made from the area. Its in my shop collecting dust a lot, nowhere to go, except for pipe «underground» parts to use sorry.

Feet weld all sorts of metal shavings-fangs to better hold the supports in concrete. Frame for the side of the bridge is welded For posts which will be concreted, welded «fangs» from metal scraps

Step 2. The destruction of the old

It’s time for disassembly. For a couple of hours was demolished the old wooden bridge that had deteriorated. A place for the new bridge cleared. 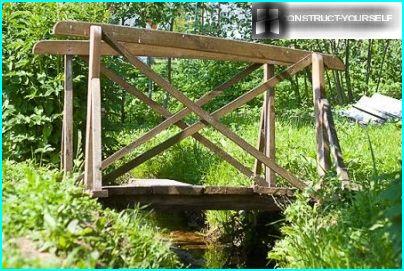 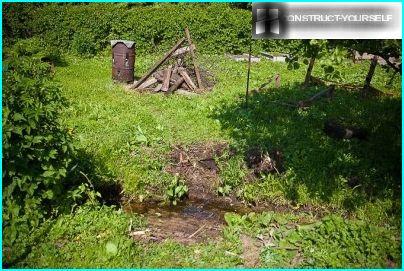 The old bridge was destroyed, the installation place for liberated

Step 3. The connection of the sidewalls in a single structure

On the ride to the brook I drove almost ready sides and different profiles needed for construction. In place welded to the side walls of the gusset plate and the main elements holding the deck. Stirred up all the voids, which theoretically can get water.

Electrodes are not spared, as the quality of welding holding parts depends, how safe would be the movement on the bridge. The stitches were intact, thought seen them still will not. And extra work to anything. 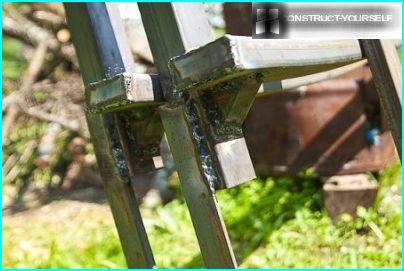 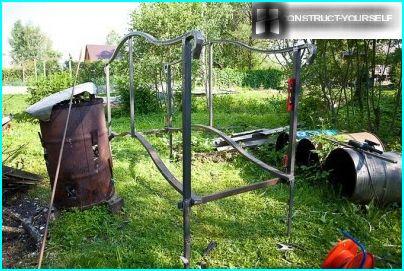 Two sides of the bridge are welded in a single structure

For rigidity welded on the sides of the buttresses. As for me, they don’t look very organically on a background of curving sidewalls. They are too straight, acute, General, not quite what I wanted. But stiffness requires sacrifice. Let them remain such. 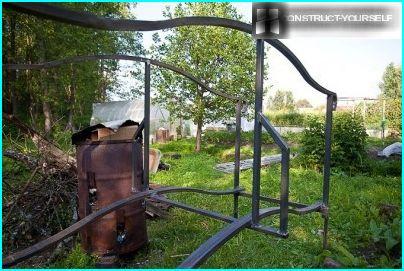 The buttresses are used to increase rigidity

The lower part of the supports of the bridge will be in concrete, I covered it with paint later, it will no longer access.

And then started drilling wells. Took a drill and almost all of their depth (in meter approximately) drilled 2 holes on both banks of the Creek. 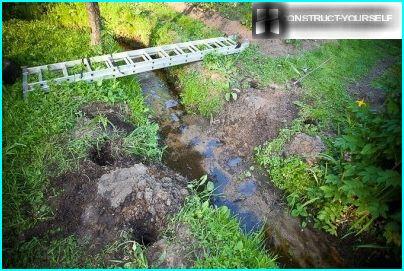 Drilled four holes for the supports of the bridge

Put in holes of a support structure, aligned vertically the building level. The hardness of the installation filled the vacant place in the holes of rubble stone. Now supports stood like a glove and will not move.

Next, concrete is poured in. At first I did the liquid batch, so the concrete easily seeped between the stones. The next batch was already more dense. I do not know what, in the end, it turned out grade of concrete, but I’m sure that the bridge on this solution will last for many years and will not move. 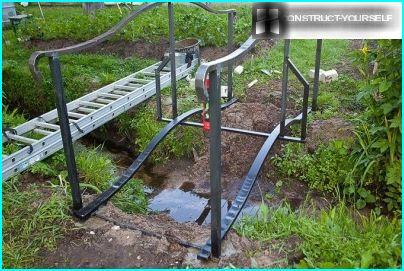 The bridge is installed, its supports are concreted in the hole

First I welded to the sidewall of the inner arc. 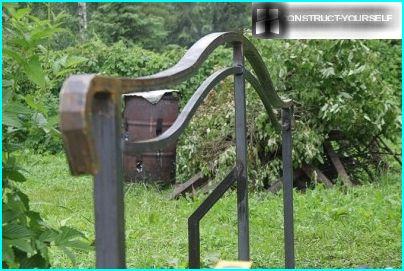 Inner arch welded to the upright sides of the bridge

Between them, in accordance with the plan shall be rack-balusters. They had to measure the place and then cut off – no one was not. Step by step, I welded all balusters. 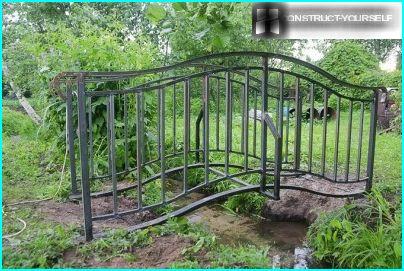 Balusters are fixed in place between the inner arcs

It would seem that with metal components finished, but no such luck. One drawback which made my irresponsible wizard, bending metal, and gave me no peace. I mean the bent end of the handrail. 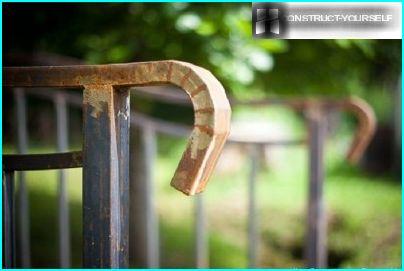 They looked pretty awful, so, without thinking, I cut them down. And then decide to do it yourself, in a decent performance. 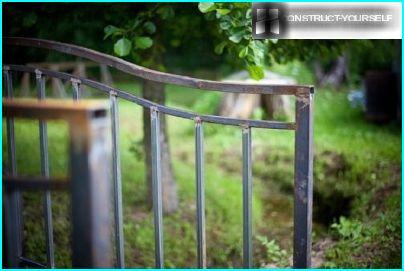 The end handrails were cut down

Bending machine I don’t have to do it or buy for these purposes would be irrational. The only way that seemed appropriate was the cutting of notches on the pieces of pipe and metal bending have them.

At first I figured, given the difference between internal and external lengths of arcs, the number of notches and their width. On scraps of pipes identified the location of the notches in increments of 1 cm Cut in the beginning around 1 mm, and then dorezal (not completely) a little wider – range of 2.25 mm. 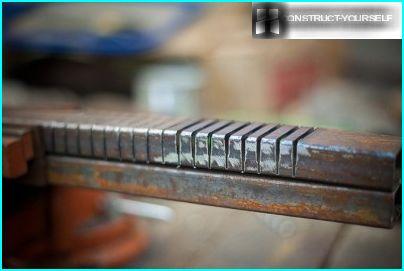 On metal pipes made of a notch

It turned out something similar to a washing Board, which has been possible to bend. I did, fixed in the desired shape and welded from the outside. The inner part has not been touched, didn’t want to suffer later with sweep. 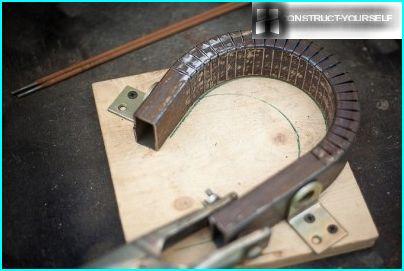 Thanks to the notches, I was able to bend the workpiece and to give them the desired shape

Since the beginning of the blank endings handrails were taken with the stock, after fitting in place, the excess pipe cut off. The workpiece was welded to the railing.

The open ends I decided to brew, not to put plastic plugs. They would look on the metal structure of alien and cheap. After welding bent parts were carefully buffed to a Shine. Turned out great, almost perfect handrails! 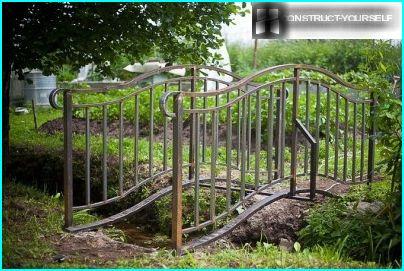 To protect the shore from blur, had to reinforce them with pipes and boards. All these reinforcing structures will not be visible, so the special beauty I wanted. The main thing that happened reliably. 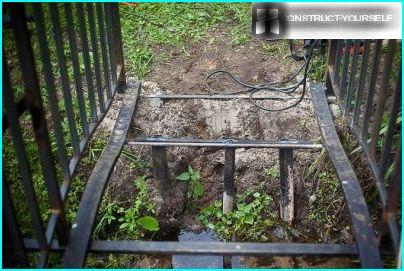 Reinforcing design to keep the banks from washing out

It is time to correct another flaw, which allowed the manufacturers of metal stock. Some profiles were of poor quality, with noticeable dents. It had to be removed. Came to the aid of automotive putty on metal – I’ve had 2 kinds.

First I filled the deep indentations the coarse filler with fiber glass on top used a finish plaster. At the same time finishi putty and the inner surface of the ends of the handrails (where there was no welding). We had to work quickly because the putty hardens in a moment. Stumbled a bit and everything froze, had to make a new batch. 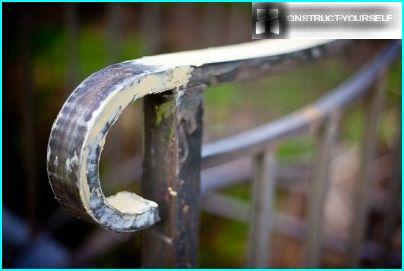 The bumps and dents were closed automotive putty

Now the metal surface of the bridge seem almost perfect. It is possible to paint. I chose to design classic color – black. All metal surfaces were painted in 2 coats.

Metal parts of the structure are painted with black paint — a very different kind!

Step 8. The unit has wood flooring

The time has come to lay the bridge Board. In the shed I have a few years lay it is a quality Board from a larch with ribbed surface type «corduroy». I decided to use. 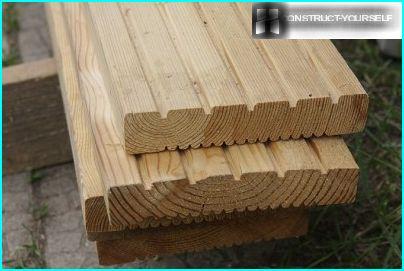 The Board has a ribbed surface flooring will not be slippery

Unfortunately, there are of larch is one unpleasant feature. When drying, it produces sharp splinters which can easily get scratched and hurt. Pulling boards from the barn, I saw that this time, the entire front side was dotted with slivers. The flip side was at its best, so it was decided to use as the front of the deck.

The Board had to prepare. I treated them with antiseptic primer – from rotting and increase the life. Dry. And then covered the spent oils. The idea was to cover the flooring with varnish, but I decided not to. Still, there is a high probability that the varnish in humid conditions, crack.

Didn’t want to put the labor of many days at risk. So stopped at the antiseptic and oil – this should be enough for several years of operation. However, the layer of oil you plan to upgrade every year to not worry about possible problems with rot. 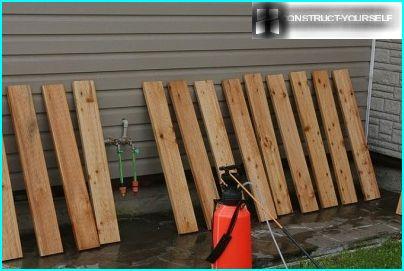 Then I screwed the boards to the horizontal holders flooring with the help of screws for metal. Between the boards left a small distance below the trapped water could drain into the brook and did not stay on the floor. Still, hardwood flooring is the weak link in the bridge and need to prevent the possibility of rot in the existing wet conditions.

The result was a good humpback bridge, you can use it without fear. And walk without wetting the feet, and the decorative function is present. 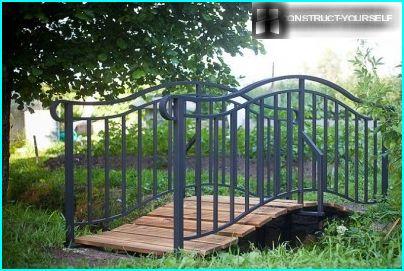 I hope that my master class will not be useless and the information can be useful in landscape work – I will be glad!