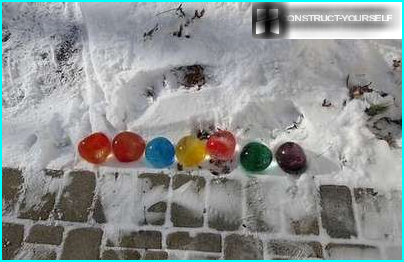 The idea is to dig the pond came to me a few years ago. But, as this work is time-consuming and complicated in terms of creative approach, the beginning of a long-delayed. Finally, during the next holiday, I decided to buckle down and step through all the steps required to create the pond. It was decided to make the pond membrane, with a geotextile lining. Planting his plants and the fish start. Fish to install the aerator. Also scheduled circulation of water through a small waterfall with three cascades. It was made originally, before the digging of the pit in the pond of piles of stones laid on a man-made earthen hill. Water will circulate in a closed circle from the pond to the waterfall by using cheap bottom of the pump.

That’s all the original data. Now let’s proceed directly to the story of the construction of the pond, trying not to miss details.

The first thing I took a shovel and dug a pit with dimensions in terms of 3×4 m. the Form and tried to do a natural, rounded, without sharp corners. Because the nature of the coastline is always flowing, no straight lines, these should be followed in the creation of an artificial pond. At the deepest point, the excavation reached 1.6 m below ground level. Could be done less, but in my case, it is assumed the divorce overwintering fish, which requires a minimum of 1.5-1.6 m.

On the rise of the pit made 3 terraces. The first (shallow water) – at a depth of 0.3 m, the second – 0,7 m, and the third All 1 m 40 cm wide, to be able to install them on potted plants. Terracing is performed for a more natural appearance of the water. And to place the water plants, the type of which will depend on the number of terraces and their depth. It is necessary to think in advance. For planting of cattail, for example, the desired depth of 0.1-0.4 m for the Nymphaeum — 0,8-1,5 m. The pit for the pond should be different levels, with several terraces

A pit was dug, the selected stones and roots from the bottom and sides. Of course, you can immediately proceed to the flooring of the film, but this option seemed too risky. First, seasonal shifts in the soil can cause the stones that were deep in the soil, will change their position and the sharp edges will break through the film. The same thing will happen if the roots of trees or shrubs growing near, will reach the film. And the last factor on our site there are mice, who dig the tunnels, and, if desired, easily accessible film. Need protection. Namely, geotextiles. He just will not give the rodents, roots, and other unpleasant factors to damage the film.

I bought a geotextile 150 g/mTwo, carefully spread it a bit and brought the edge to the beach (about 10-15 cm – as it turned out). Temporarily fixed stones. 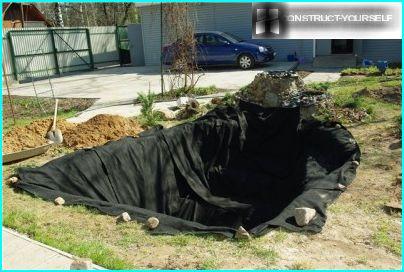 Perhaps the most important stage – the creation of waterproofing. They can be neglected if the hydrogeological conditions of your site allow you to create natural waters. But such cases are very rare and it is better not to risk it, so you do not have to redo everything.

So, waterproofing is needed. In my case it is — tight butyl rubber film, specifically designed for ponds and reservoirs.

Initially, I want to dissuade you from using plastic films sold in ordinary hardware stores and used for covering greenhouses. Especially if the pond is large enough. Will lie this isolation 1-2 years, then, most likely, will leak and have to redo everything. Extra headache and expenses provided. Need special film for ponds – PVC or butyl rubber. Last option is the most quality, durability butyl rubber protectors will last for 40-50 years for sure, and maybe even more. Plus rubber waterproofing is that it perfectly runs. The water pressure in the pond sooner or later will lead to ground subsidence. Film in this case is stretched. PVC may crack or break up seams. Butyl rubber will simply stretch like rubber, it can withstand significant stretching without consequences.

The size film needed for my pond, I calculated as follows: length equal to the length of the pond (4 m) + twice the maximum depth (2.8 m) +0,5 m Width is defined similarly.

The tape I laid over geotextile, bringing 30 cm of edge on the shore. Tried to smooth the folds on the bottom and walls, but especially in this did not succeed. Decided to leave as is. Moreover, the folds will compensate for temperature changes and to pull it too tight is just not necessary. 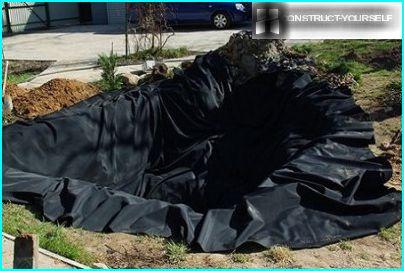 The pit, covered with butyl rubber film, will hold water in the pond

After the layout is necessary to fix the edges of the film. Leave them open on the ground, as between the film and the walls of the pit to get water. Inevitably, there will be blisters, which film will have to be removed. And it is very difficult, especially for large size pond.

You can now run the water. I threw it into the pit hose and used it to pump water from the well. Water was gathered for several hours. As filling of folds of the film was lost, they had to spread. But in the end stretch was pretty uniform. 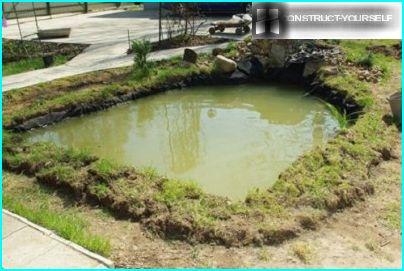 The pond, filled with water, some time must defend for the installation of the biobalance

And one more important detail about which is worth mentioning. Together with clean water from the well I filled in the pond a pail of water from a natural pond. This is to accelerate the formation of biobalance. In other words, the water from the pond to the existing biosphere will help to set another one in the new pond. There is no balance, water is turbid and green in a matter of days. And soon will not resemble a pond, and a swamp with green slime. Activation of biological systems will also contribute to plants planted in the water at the bottom.

To a depth of 0.5 m I immersed pump, water supplied to the upper cascade falls and on the small garden fountain. The separation of water is regulated directly at the pump. 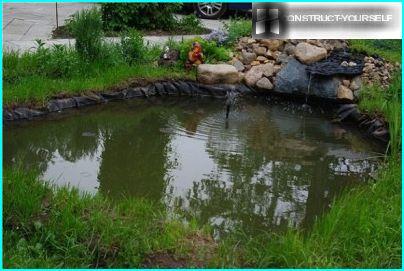 Plants – a separate issue. I wanted to plant a lot, to the pond immediately, from the first day, created the appearance of a natural, natural pond. So I went to the market and got there a swamp irises, belokrysenko, water hyacinths, a few nymphs. For landscaping the shore took a few clumps of Lobelia, monetchatogo loosestrife, bulbs white Calla lilies.

On arrival it seemed to me a little, so I took a trip to the nearest pond (from which he drew water for biobalance) and dug up some bushes young Rogoznica. Will grow and the water to clear. I wish there was more in this pond there is anything suitable. And that would be to not buy anything had. Maybe you’ll get lucky and in the pond nearby you will find all the plants for landscaping your own pond. Almost all aquatic plants are grown in our natural ponds. With some share of luck it is possible to find and pick the sedge rogoznik, yellow iris, marigold, calamus, Germanic, potbelly yellow, and more.

On the upper terrace I put in balcony boxes and baskets planted Rogoznica, belokrylyj, water hyacinths, bog irises. Put in a heavy fertile soil, top covered with pebbles, so that the fish is not carried off the ground and grab the roots.

In the basket put the lilies – them at me 4 pieces. Also the top is covered with pebbles. Put the basket on the middle terrace, the one that is 0.7 m deep. Then, the growth of the stem, will lower the basket lower, yet will not establish for good 1-1,5 m above the water level. 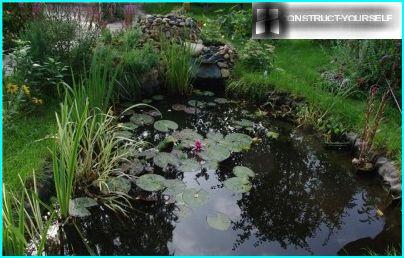 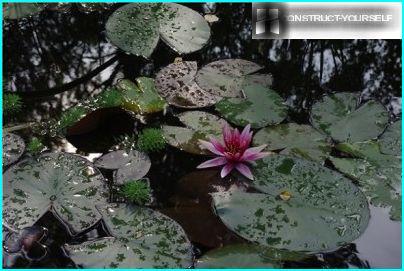 Flowers of the nymphs are kept for a few days, then closed and lowered into the water

Lobelia and monetchatogo loosestrife plants along the shoreline. There dug the bulbs Calla lilies. Loosestrife quickly became to pull their branches directly into the pond. Soon the film is on the rise will not be seen! All overgrown with grass, loosestrife, Calla, and other plants planted.

Initially, the water in the pond was clean as a whistle. Thought it will be so. But, after 3 days I noticed that the water was turbid, bottom was not visible. And then, a week later, she again became a net – established biological balance. I waited another two weeks and decided it was time to start fishing – all the conditions for accommodation are created.

Went to the bird market and bought some nice ones of comets (almost Golden fish) and carp – silver and gold. A total of 40 fish! Released all. Now frolic near the water fountain. 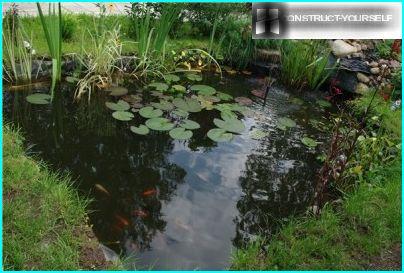 The pond that fish looks magnificent!

For a comfortable stay of the fish was connected to the aerator. The compressor 6 watts, so it works continuously, the electricity consumption is not expensive. In winter the aerator particularly useful. Saturation of water with oxygen and ice will be provided.

In this master class can be completed. I think it was very good. The main indicator of that clean water. As such, mechanical filtration I have. The balance is regulated by many plants, aerators, circulation of water through the waterfall and fountain with pump.

With regard to funding, most funds were spent on butyl rubber tape. Pit digging myself, if you hire a backhoe or a team of diggers will have to pay, but the hole will be dug quickly. The plants are not too expensive (and if you take them from a natural pond, and none – free), fish – also.

So it’s all real. If you are not afraid of significant work (especially the digging of the pit) and the need for a creative approach – forward. In the extreme case with designer flair no luck, look through pictures of ponds in magazines or on the pages of specialized sites. Find what you like, and try to make something similar. And then enjoy the result, and a private pond on the property.