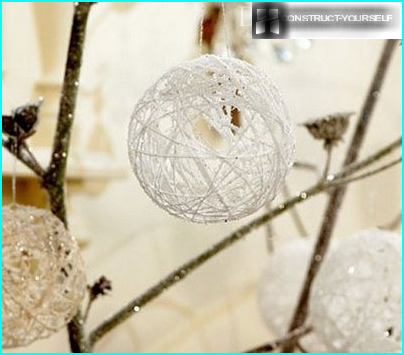 A year after building a house I wanted to attach it to the front wall of the canopy. He was functional, but at the same time very simple in design. What was required from the canopy? Most importantly – at the expense of him wanted to get extra place for a summer vacation, protected from sunlight and rain. For gatherings in the open air and it was possible to dine in the courtyard, and relax in the sun loungers. Project canopy was supposed to be a kind of replacement of the pergola, but with a more simple design. During construction it has been spent a minimum of material resources and physical effort.

2 weeks conceived plan was carried out. Based on the practical skills and knowledge, I want to offer to your attention a report on the construction of a very simple, classic canopy, attached to the house.

The design was chosen as the standard for this type of canopy. It’s just a truss system of the roof on supports. The size of the canopy in terms of – 1. 8×6 m, height to roof, 2.4 m. on the one hand as a supporting element used metal poles (4 pieces along the façade), with another Board fastened to the wall of the house. Roofing sheets Ondura (analogue Ondulin, larger sheets). Between the pillars is planned to install lattice trellis for the grapes to sit in the shade under a canopy, enjoying the nature and fresh air, even in the midday heat.

So begins the story of how this idea was implemented. Hopefully will be able to describe the whole process.

I started with the installation of metal poles, that is, the vertical struts of the canopy, which will hold the truss roof system. There are only 4 pieces, they go along the façade, at a distance of 1.8 m from the wall. The plan length of the canopy is 6 m (for the entire length of the facade of the house), so the column distance of 1.8 m (taking into account offsets of the roof on both sides of the rack).

For the stands was bought 4 steel pipe 60х60х3 mm square section with a length of 3.9 m In the soil they will be buried to 1.5 m (below freezing), the top will remain 2.4 m. This will be the height of the canopy.

First, I outlined the stakes of the place of installation of columns – strictly at a distance of 1.8 m from the wall. All measured, calculated horizontal. Then took a drill with a nozzle of 150 mm and drilled 4 test pit 1.5 m deep. 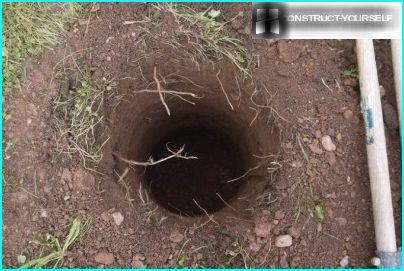 The hole is drilled the drill

According to the planned program, under the stands will be flooded with pile Foundation of concrete. This is done as follows: each strut is installed in the pit, which is filled with concrete. Get reinforced piles that hold the rack.

Pouring concrete directly into a drilled hole is undesirable. Need to do insulation, which simultaneously performs the function of the formwork. For this I decided to use asphalt liner were twisted in the form of a cylinder the pieces of roofing material. Length of sleeves shall be such that concrete piles were above ground level at 10 cm from the pit, 1.5 m deep, the bottom of which is poured sand cushion 10 cm, the required sleeve length is 1.5 m. the Diameter of the sleeves – 140 mm.

I cut pieces of roofing felt, folded them in casings and held together with tape (you can use a stapler). Then at the bottom of each test pit was filled a layer of sand 10 cm and was inserted back the sleeve. Formwork under concrete ready.

The sleeve was installed in a metal rack. Initially, two extreme, I have them aligned vertically and the height (2.4 m), stretched a cord between them and have him put two interim post. Then poured in a liner of the concrete (from the ready mix, just water added and all – very comfortable). 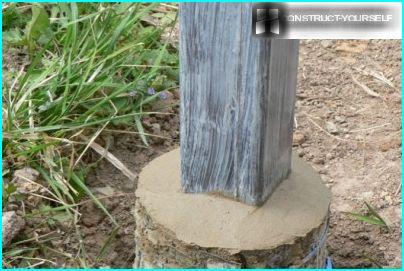 Concrete is poured into the liner of the roofing material, holds metal stands

I cut pieces of roofing felt, folded them in casings and held together with tape (you can use a stapler). Then at the bottom of each test pit was filled a layer of sand 10 cm and was inserted back the sleeve. Formwork under concrete ready.

The sleeve was installed in a metal rack. Initially, two extreme, I have them aligned vertically and the height (2.4 m), stretched a cord between them and have him put two interim post. Then poured in a liner of the concrete (from the ready mix, just water added and all – very comfortable). 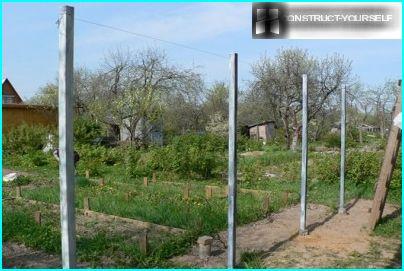 Stands on display on the tense cord

In the grasp and rejection of the concrete I took 3 days. During this time, a rack loading is not desirable, so I started to prepare the wooden parts – reference of boards and rafters.

The design of the roof there are 2 reference boards, which will be held in the rafters and the entire roof structure. One of the boards fixed to the wall, the other on poles-pillars. On top of the support planks in the transverse direction, are stacked in the rafters.

Board taken from a cross section of 150х50 mm, length 6 m. since the canopy was originally planned as a solid, but inexpensive design, I bought not planed boards. Have estrogel and grind them yourself, that took some time. But I was confident in the result, the ironed surface of the upper class.

The rafters are laid in the grooves of the support boards. Another headache – you need to cut the grooves, and the angle of inclination of the rafters. To determine the angle and the point of connection, had to perform a test installation of the boards. To this wall Board I screwed a wood 140х8 mm, to metal racks – cuts 8 mm studs using washers and nuts. 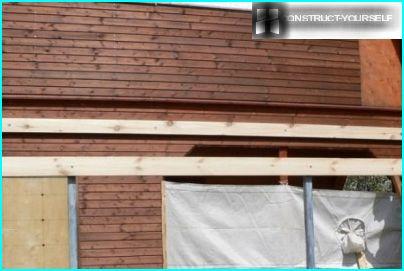 Mount supporting boards on the rack and the wall

Now that the supporting boards in their places, in the course went Malka, with which I determined the angle of the rafters. Then the boards were removed and, given the known angle, cut the grooves for the rafters.

After adjusting the rafters to the grooves, all the details were painted glazing composition Holz Lazur JOBI colors «teak».

Then everything was installed. Reference Board – like during pre-fixing, that is, using capercaillie and studs. Rafters were laid on top, in the grooves of the boards and hammered nails. Each groove took 2 nail hammered through the rafters inclined toward each other. 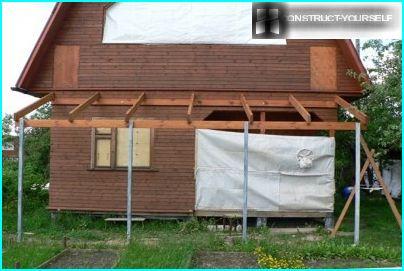 Setting the rafters into the slots of the support boards

On the crate under Onduru went Board 100х25 mm, length 6m – 7 pieces. I screwed across the rafters with screws. 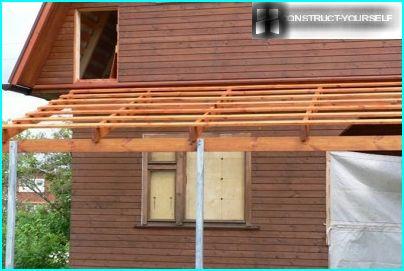 Ondura sheets stacked on the crate and nailed has finished nails with plastic caps are the color of the flooring. In fact, the roof is already ready, now you can not worry about the rain and enough space under the canopy. For example, carrying garden table and chairs. 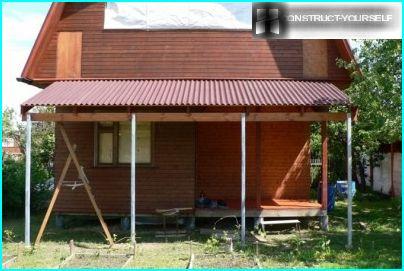 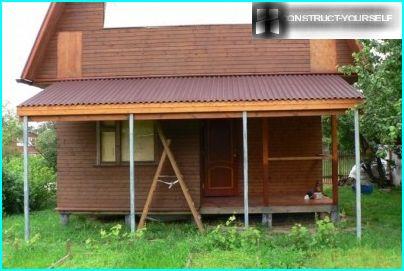 The next stage is the attachment of the drain. On the front Board is equipped with two drain 3 m. the Runoff from the roof goes to the watering pipe through which will be implemented by irrigation of grapes.

Step #3 — fill the Foundation under the mini-wall

So that during rain water does not get under the canopy, I decided to do between the uprights of a low retaining wall of brick. It need strip foundations, which I made by standard techniques. Dug a trench between the supports on the bayonet spade and put a timbering from boards. On the bottom of the trench poured sand cushion of 10 cm And have at it – put 2 valves on the struts for fastening (reinforcement) Foundation.

Without reinforcement to make afraid, you never know, maybe the cracks will go and collapse. Then mixed concrete and poured it into the trench. You had to wait until the concrete solidifies and hardens, so the supporting wall I decided to come back later. And now to start decorating your buildings.

Step #4 — installation of overlays for the pillars and tapestries

It’s time to look for a canopy with a critical eye. A bit distracting from the overall composition metal stand canopy. I decided to decorate and Refine, sewing up wooden covers. Just for this I have a few boards 100х25 mm. and secured over a metal pole with sections of the M8 studs, washers and nuts. Between the shoes (from the setup trellis) had space, I would put the rail 45х20 mm. Reiki formed the projections, they will be assigned to the horizontal elements of tapestries. 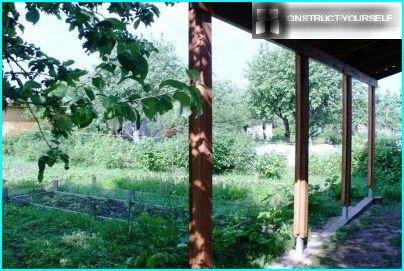 Came the mounting of the tapestries. I chose for them a grid pattern with a carved hole in the center. This hole allowed me to use for the tapestry not only of long strips, but crop. You can say that it was a waste-free production. And looks like this figure more interesting than the standard monotonous squares.

Lath trellis was done by longitudinal slitting I have had boards 100х25мм. The Board blossomed into three parts, the resulting slats have been elaborated. The final section of the slats (after polishing) — 30×20 mm.

Trellis I made without a frame of slats is fixed only on the vertical projections of the uprights. At first I put the horizontal slats, then screw them to the lugs with screws. Then above them are fixed vertical slats. Turned decorative grille, near where wife planted grapes. Now he already winds through the trellis and almost blocked the wall structure. The shadow protects from the midday heat. This is very helpful, because the canopy is located on the South side of the house and no shelter to rest here a day was almost impossible because of the extreme heat. 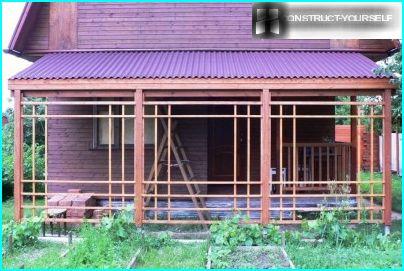 Tapestries are drawn from the slats directly «on the spot» 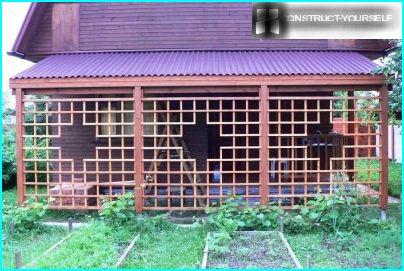 Trellis close the front part of the canopy

Step #5 — construction of a retaining wall 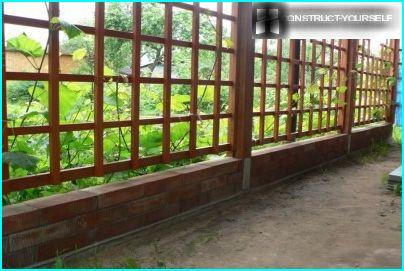 Now, less dirt when watering and rain. And the canopy looks so much nicer. 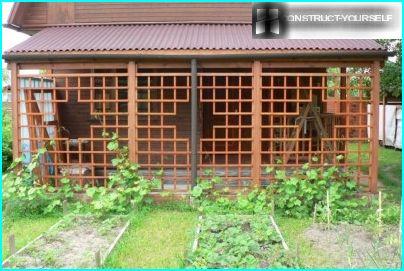 Carport with trellis for the vineyard

Here, perhaps, and all. The canopy was built. The entire project was implemented I had one, but no difficulties in the process noticed. Subsequently, the area under the canopy was covered with paving slabs. You can say that I got a covered terrace or pergola as someone like that, and call. Although by design, it is the usual canopy on poles, the time for the construction of which took quite a bit.