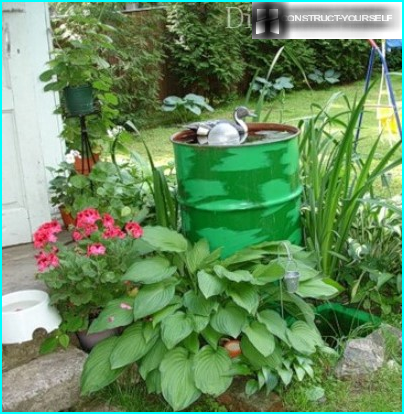 Landscaping suburban area, I have been doing for years. What I don’t have is potatoes, endless tomatoes and cucumbers. My whole site is a garden with lawn and ornamental plants planted in flowerbeds, mixed borders and other compositions. Special place here is the rockery, which started with a rocky beds, and ended the whole composition of stone, gravel and flowers.

The idea of creating rockeries were not random. 4 years ago when I started to lay the first stones on landscape design I didn’t have a clue. Rocky garden emerged as an inevitable component of my site. And here’s why. Acquired land, which required the development, had the completely infertile soil. A few years ago working on a bulldozer uprooted stumps here and, among other things, cut off all the topsoil. Instead of land, we, the vacationers, there was clay, which was difficult to grow anything.

And I wanted to grow flowers! And from my dream I was not going to retreat. Asked my husband to bring me some tires, put them in the earth brought from the forest and abandoned greenhouses. Turned the raised beds into which I planted the flowers. Grew well at first, I only admired them and was happy. And next spring, looking at the work of their hands, I was disappointed. The tires still looked in my garden, as something alien. I wanted to be closer to nature. And then it hit me! Why not try instead of tires to use a stone? Determined, I went to his prey to a nearby gully. Scored a suitable material is medium in size and began creative work.

From the gathered stone I posted the first raised bed, filled it with soil and planted flowers-Alpines. Then there was a second bed, near her third. Loomed composition, which oppressed me one monotony. Then my eyes fell on a pile of gravel left after the builders. And I decided that for full happiness I miss the gravel beds. I posted as more related to the overall composition, segments. Then came the gravel of the stream flowing from the well to the flowerbeds. This stream has rendered a very useful service. It was thematically connected buildings in areas with rockery, which previously occupied as separate from everything else. Rocky garden grew, rebuilt, and after 4 years has found its final form. 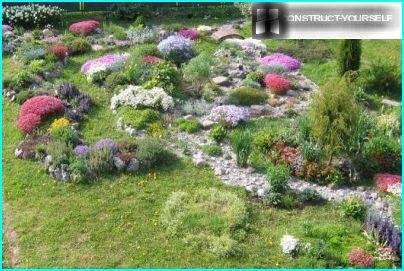 About technology of creation of the rocky and gravel beds

The basis of the rockery – these are stones that must be placed in a harmonious combination. It’s complicated. We must strive to ensure that the composition acquired a rocky and mountainous landscape. And of course, the important technology. Without her compliance, even soaked in all the traditions of design rockery risks through time to become your headache. For example, if he settles and forms a failure. Or will be the site of accumulation of rain water and all the plants will simply get wet. Although often there is more. Using stone powder sprouting weeds that are very difficult to deal with in an already stacked stone compositions.

About all this trouble you need to think ahead and be proactive. According to the rules, the construction of the rocky beds and slides, you need to do in the fall. Over the winter a rocky mound will show all their shortcomings. The stones and earth will subside, covered with soil washed off with water. In the spring it will be possible to correct the flaws, fill up where you need soil or stones. And to start gardening. This step-by-step construction is especially important for the Alpine slides, flat beds are not as prone to shrinkage, so green they can be used immediately, and all is revealed through time to fix the flaws «the place».

The first was made of stone beds. First, I outlined the desired outline, filming inside the turf of about 20 cm On the bottom put a layer of sand for drainage (10 cm), was adaptive it and laid out the walls of the flower beds with stones. Then cover the flower bed with soil, which, after planting, have zamulchirovat gravel. On top put a few medium sized rocks for a variety of landscape paintings. 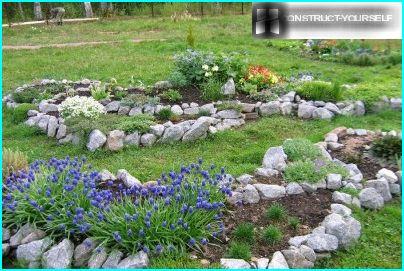 Technology of creation of gravel beds is somewhat different. To begin, I removed the turf to 25 cm, covered a small layer of sand 10 cm, adaptive. Put gravel on top to ground level, also adaptive. In the gravel backfill was done the hole was filled back soil, planted the plants. The contours of the flower beds to isolate them from the grass of the lawn, doing a strip of thick plastic film. Gravel on top put a few stones large and medium size in any order. 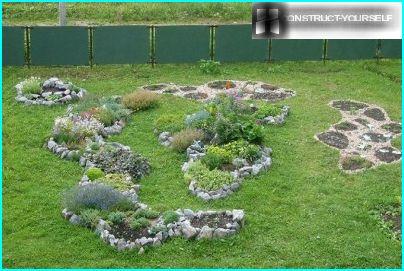 Dumping gravel on the surface of the beds serves not only decorative purposes. This mulch, which firstly, inhibits the drying of the soil. And secondly, does not clear up the weeds whose seeds are sometimes still puts in the flower beds. Sometimes they sprout, but in a much smaller quantity than in the no mulch, the soil. In addition, through the gravel of them and easier to pull. There, where the ground remains open from weeds to protect groundcover.

From two the lowest points sand beds, I took two narrow ditches running in the General drainage system of the site. Through them is the runoff of excess water that have adverse effects on plants (especially in the wintering period).

The entire composition was written in fragments, gradually, as long as I was not satisfied. But making a stone and gravel beds – not all. You need to remember about the landscaping. Competent landing will hide small mistakes in the arrangement of the stones, make the bed «live» and really interesting. 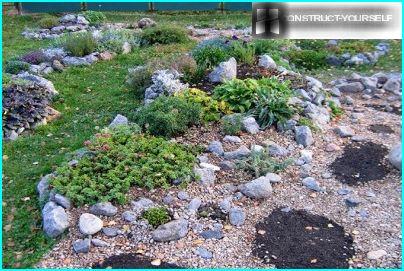 The surface of the gravel beds multimedia

My principle of landscaping rocks garden

In your I grow rockeries-Alpine plants that require about the same conditions. For your flower beds located in the open area, I chose sun-loving flowering species in loose, water permeable soils. Such soil I was made by diluting ordinary soil a large amount of baking powder and peat.

Some plants I grew from seed, others bought in form of bushes or cuttings. Special care is required. I water all your plants at the root, without waiting for excessive drying of the soil. Fed very rarely, once a season, using a soluble fertilizer. Alpines grow well in poor soils. I originally was meager soil that they are not much grown and remained in the form of a compact low cushions. The main thing to bloom! But if not bloom, then feeding mandatory.

And now about the range of plants. One of the most beloved – saxifrage Arends. It grows quickly, blooms magnificently capable of self-seeding. It blooms already in the 2nd year of sowing, however courtines was still small. But in 3rd year when her pillow grow to 15 cm in diameter, the result is a true floral carpet. For saxifrage need to leave at least two feet of space. Only at first it grows slowly, and then steadily occupies a large area. 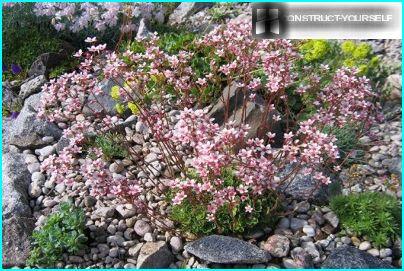 Saxifrage makes the heat only when abundant watering

Prone to rapid growth and another resident of my stone beds, Phlox subulate. Problems does not deliver, can tolerate sun and drought. Saxifraga Arends in more capricious, as it needs a good soaking. And floks even in Spartan conditions, on poor soils, very abundant and growing rapidly. Therefore, by the way, and not suitable for small flower beds. Or Bush will have every year to be cut to the desired size, in principle floks such drastic pruning takes painless. 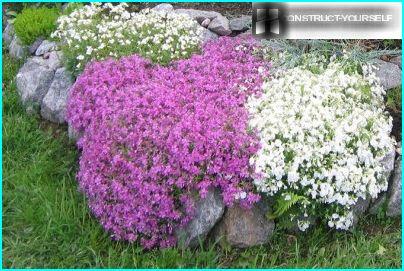 Another drought-resistant flower – alyssum rock, the best feeling in the crevices between the stones. It is undesirable to transplant, it will be a long time to be sick. Should immediately put in a permanent place. And then he will quickly show itself in all its glory, will grow and close all the patches in the flower beds. 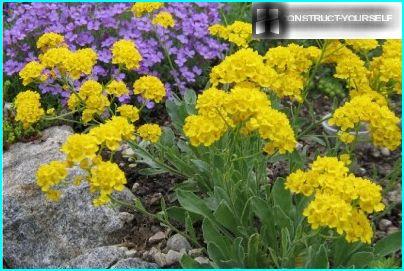 Alyssum rock has a honey fragrance, which attracts butterflies and bees

Unlike the alyssum rock, tolerates transplant obrieta. So she formed a beautiful compact shrub and keep in shape, it is best to attach it between the stones. Apparently, obrieta loves the tightness in the roots. 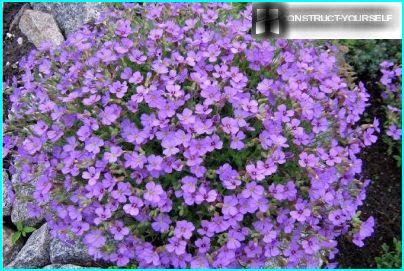 Obrieta winters with leaves, so in early spring it looks quite decorative

Tightness and a small amount of soil transferred young. I have three types of pubescence, roofing and Praskovia. They form a low, dense and neat mats of green. Blooming amazing! Plant them on the ground and between rocks, in stone walls. Absolutely non-aggressive, sociable with other types, the plant. 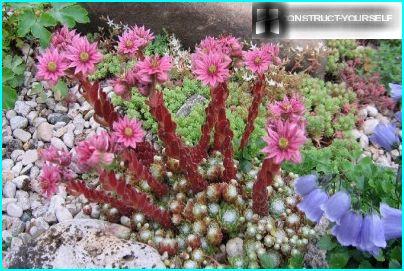 I like the stonecrops (Sedum). In General, I believe that a small rocky garden can be planted some melodrami and blasting. Sedums, unlike young, the aggressors. They grow at breakneck speed and cover the entire free space. Their shape we need to constantly adjust to keep. In my rockeries live sedums: crassifolia, rotundifolia, topochemistry, flowering. 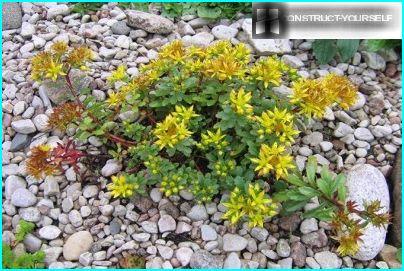 Before any ground cover in my flower bed is blooming arabis caucasica. So with him I have no problems does not happen. Winters well, in the spring quickly forms a carpet of white flowers. When it fades, about caring for them you can forget a real Spartan. 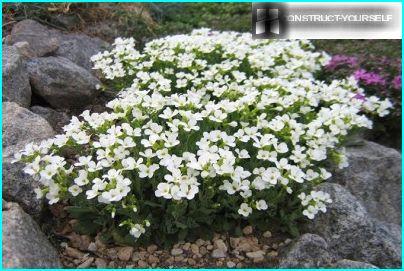 Among the stones of rockeries organic look small Alpine – bells giant and Carpathian. They almost do not grow, remain neat bumps. So does Alpine carnation. The maximum that they can take in the flower bed, about 20-30 cm. 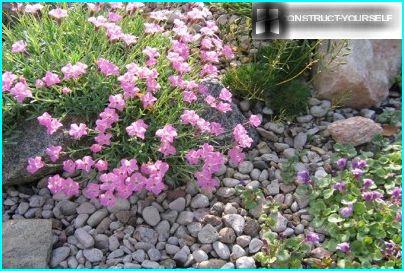 Alpine cloves should be planted away from aggressive neighbors, it does not stand competition and could die

Besides all labeled in the rock garden I grow palomniki, gentian, yaskolki, lewisii, columbines, Oxalis, periwinkle, variegated. The collection is quite extensive, so I had to come up with a strategy that helps me create a consistent color composition and to avoid chaos. I’m doing the following: planted in different parts of the flower beds, some plant species. It turns out that the color spot, after some distance again interact among themselves. It brings harmony in the design of my rockery. 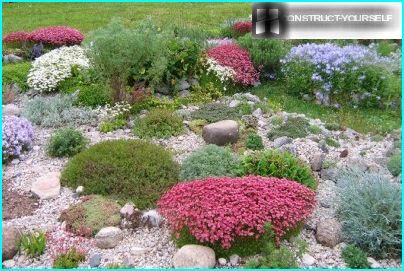 Rockery in summer the riot of colors

This will finish the story. While working on my rockery will still continue. There are always new ideas that I want to bring to life. I still continue to do and it makes me very happy!