One of the most important stages of building a house is the roof Assembly, because it is necessary to choose the optimal variant of location of the rafters. To afford to build the roof, you need to consider several options for the installation of the roof, as well as learn about the workflow. 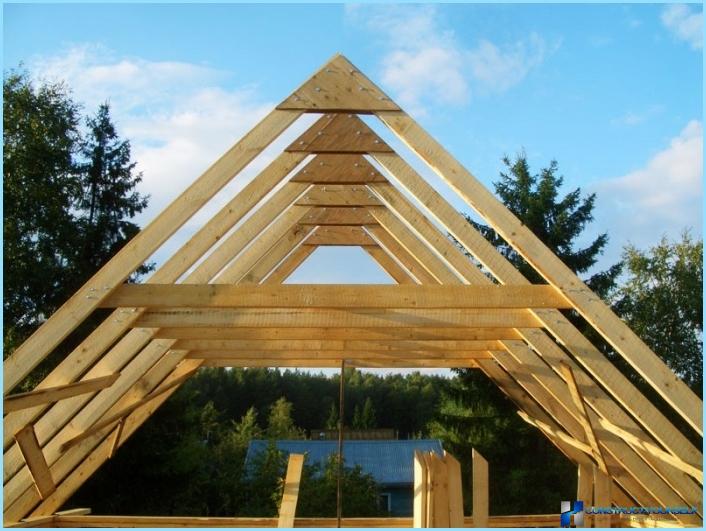 The design of the rafter system ↑

For each house should be designed truss system that is suitable for this structure. If this is not done, the load will be distributed unevenly, which can lead to distortion of the roof.

To create the correct project, you should consider that: 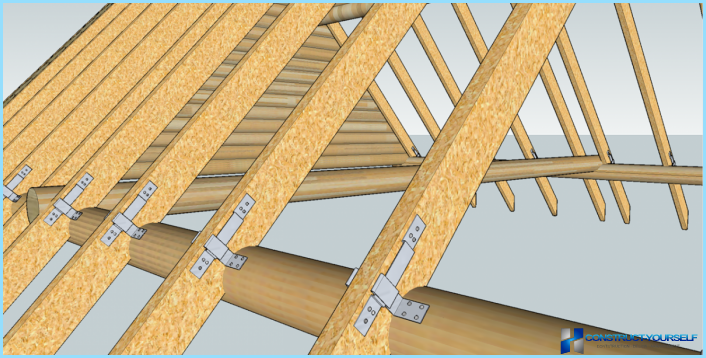 Pre-treatment of wood and the preparatory work ↑

Before starting work, the timber must be treated with special compounds to protect it from the effects of microorganisms and fire. Applying an antiseptic is happening prior to installation. Cause of the need using hard brushes.

The composition was protecting wood as long as possible, it is applied in two layers (before it is dried material). Install the rafters on the roof takes place only after complete drying of the applied compositions.

The preparation begins with checking all the walls and ceilings, as well as measurements. If in some places the wall deviates from the horizontal, it can be fixed with cement screed. If the house is built of wood, the irregularities are removed thanks to the installation of linings from wood.

For ease of installed scaffolding. They should be located at roof level.

Mauerlat is the basis on which the impact load, so it begins construction of the roof system. The location of this element is made so as to evenly distribute the load on each support. This element of the truss system is a beam or timber that fits on the outer walls. The option of creating a roof system is the most effective.

It is important! to moisture on mauerlat without diminishing its service life, the timber is laid two layers of roofing material. 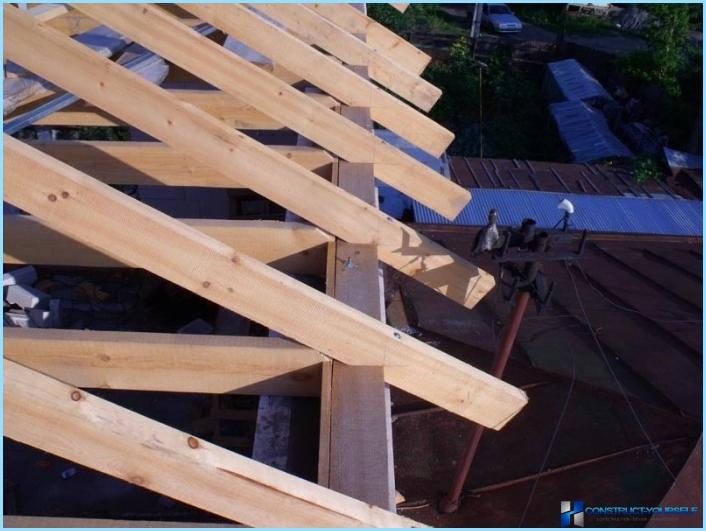 As mauerlat используе6тся beam the section of which is 10X15 cm Fits the element after the completion of the construction of the walls. After laying before securing a determination is made horizontal with a level. The most popular method of fastening is the use of anchor bolts.

The bolts are fixed on a reinforced zone at the time of completion of construction of the wall. After that, the beam drilled holes, which coincide with the location of the bolts.

Before the construction of the roof system necessary to determine the type of used rafters. They are divided into 2 types:

If the structure is small, uses only simple trusses, which are attached to the mauerlat and connected by a crate. If the structure is large (for example – a house), it is the construction of a more complex roof structure. Before installation of rafters a gable roof with his own hands the choice of inclination, which is determined based on the estimated load from snow and wind.

Hanging rafters is a construction based only in two places. This means that in this scheme, intermediate supports are not used. A distinctive feature of this kind of rafters is the creation of a bursting stress on the walls of buildings. This type of frame is most often used when building houses. If the angle of the roof is less than 45 degrees, then there is extra elements. Most commonly used tightening that connect the rafters between.

It is important! Than delay higher, so it should be stronger.

For the construction of the truss system naslonnye type requires the third pillar, which is usually another load bearing wall.

Before starting work, should prepare the necessary tools and supplies. To avoid dangerous situations, it is better around the house to build scaffolding. Don’t forget about individual insurance. 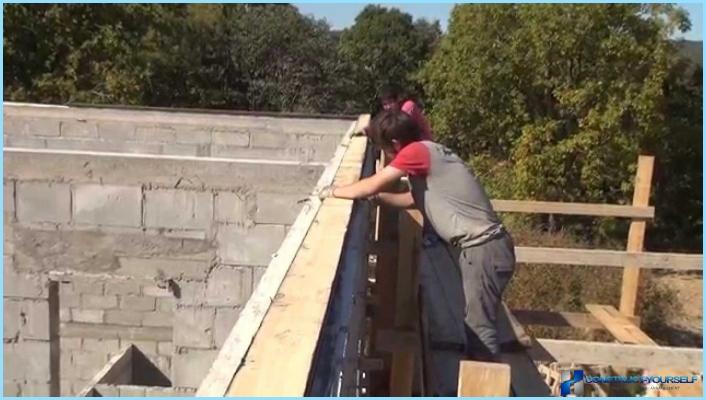 For rafters, you select a beam, the cross section of kotorgo is 50/200 mm

Installation of rafters a gable roof is as follows:

To truss the legs were joined together more securely, is made by cutting out half of their thickness in the place where they connect. Cutting out parts of the rafters on the ground, on the roof to make it uncomfortable.

Prior to installation of the rafters is marking the mauerlat to comply with the selected step between the supports. Typically, the distance between them is equal to one meter. The same marks are put on the ridge run.

The methods of installation of rafters on the walls ↑

If the rafters are installed on brick walls, they are fixed by means of tools, called «ruff». It represents the element of metal, which is hammered into the wall from the inside of the structure and loop covers the rafters. 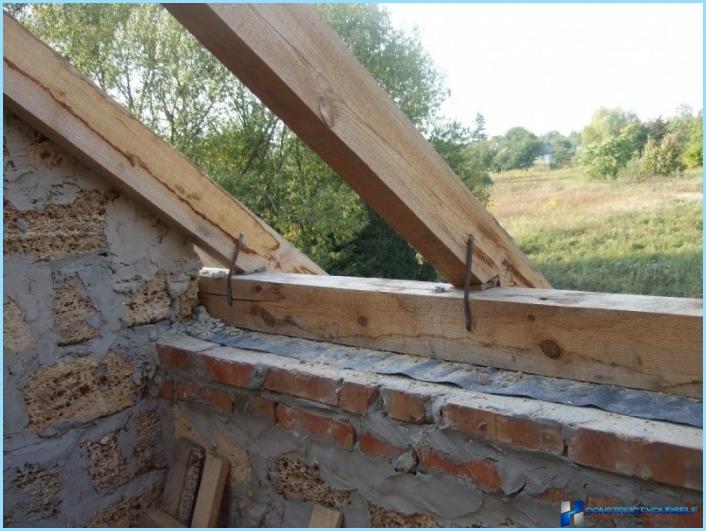 All designs that do not shrink, anchoring takes place by means of sawing in the rafters of the recesses to join the mauerlat. The attachment occurs by means of nails or corners.

It is important! between the truss system and the pipe should be a distance of at least 130 mm.

Strengthening the rafters with additional elements ↑

If a truss system already in place, but the owner of the house found out that it is not adapted to the loads that affect it, it is necessary to strengthen the rafters. This happens by embedding additional wooden beams, which are called reinforcements. Attach to the rafters using metal clamps or serrated plates.

Strengthening can occur when the middle rafters have too much load that threatens to break the beam. To avoid this, there are additional pads on the connection phase with a base. The new part of the roof system can be erected both above and below the old elements of the roof.

If the installation is above, then in addition to the strengthening of the roof occurs and the change in the gradient. This method allows you to avoid wasting time on a complete replacement of the rafters and involves the consolidation of the new rafters to those that are already established. The process of changing the roof begins with the removal of the sheathing. This occurs after installing new elements, which connection method do not differ from the old roof system.

In some cases it is necessary to strengthen the bottom of the truss legs. This is necessary in situations where mauerlat begins to rot and become less reliable. To strengthen the rafter is the attachment of braces, rests on mauerlat or additional groundsel. For more reliable fastening of the rafters are cut the notch. Additional elements are fastened with nails.

Methods to repair damaged parts of the roof are:

The first method is used when a single damage to the rafters. To enhance the element of the truss system is the attachment of wooden plates and their fixing with screws or nails. Additional elements must securely rest on mauerlat and secured in such position by twisting.

Rod prostheses are often used in mass damage to the rafters. To strengthen the first is the installation of temporary supports to the rafters were in a fixed position. After that comes cutting out the damaged parts of the structure. Then put the denture which rests on mauerlat.

Pads that rest on the beam, are used in the case when the decayed part of the mauerlat. In this case, the plot is cut. For supporting the truss legs creates an additional reinforcing strut, which rests on the pre-pinned beam. The beam is placed below the mauerlat if it allows the construction of a wall. In order to make the crate in a place where there is no support, the accession of additional boards on which sheathing is attached.