Slate has been used as a roofing material, it has not lost its popularity in our days, especially since the roof everyone can handle yourself if you know how to cover the roof with slate.

The advantages of this roofing material are:

The roof from slate is suitable for any design of buildings, looks beautiful and is a long time.

The types and sizes of sheets of wave slate for roofing ↑

Mount the slate on the roof is produced by the crate, which uses block 60×60 mm, roof boards with a thickness of 60 mm or more. This is due to the increased load of roofing material for the roof system. The distance between the bars of the crates make so that the sheet of slate lying on at least two of them with a margin of 15 cm on each side.

The smaller the angle of the slope, the stronger the crate ↑

For roofs of slate recommended tilt angle of a slope of not less than 22on. For odnoskatnyh and dvuskatnyh roofs angles can be smaller, but require a reinforced crate. The principle gain for different angles of inclination of the ramp shown in the figure. Slate put under the vapor barrier, especially if you plan the roof insulation.

It is important! Before laying the slate all wood construction it is necessary 1-2 times antiseptic process with fire-retardant properties. It will protect them from rot, fire, and prolong the life of

How to determine the number of slate roof ↑

Planning the execution of works with their hands, it is important to calculate the amount of slate to the roof to material enough, and avoid unnecessary spending. For a person who is familiar with the basics of geometry, such calculations are not difficult. Roof with one or two slopes will need to measure the width and length of the house, the angle of inclination of the slope.

More than a simple calculation of the size of slate roof, his doing so:

For hipped roofs, the area slopes calculated geometrically (area of triangle and area of a trapezoid, as shown in the figure), divided by the square sheet of slate, and add 15%.

It is important! Buying slate, you should pay attention to its integrity. The asbestos cement sheets should be interleaved with paper or film. To keep the leaves must be on a flat horizontal surface, protecting from moisture and sunlight.

Preparatory work for installation of the roof ↑

Before working on the device roof of slate, prepare all the necessary tools and level surface where you will cut the sheets and drilling holes in them. The platform should be such that the sheet can be approached from either side.

For installation of roof slate you will need: a hammer, roofing nails or self-tapping screws, a drill, a grinder or hacksaw, respirator, paint for staining sections, stair step ladder, stair-ladder, rope, metal hooks.

How to lift the slate on the roof ↑

Those who are planning to do the roof with their hands, the question often arises as to lift the slate on the roof. This is done using ropes and two hooks. A sheet of mesh on the bottom two hooks to which to tie the rope. The rope along with a pull sheet of slate on the roof. Can the leaves to feeding by hand, using a step-ladder, if work is done by two or three people.

Preparation of sheets of slate ↑

Before you lay the slate on the roof of unpainted sheets if necessary can be impregnated water-repellent composition, acrylic paint, waterborne or alkyd paint. Paint covers the cracks that makes the slate more smooth, snow in the winter time it rolls easier.

Slate, depending on ambient temperature, prone to deformation, so between the nail and asbestos should be a small gap. Do it, and drilling holes in the crest of the slate 2-3 mm larger in diameter than the nail. It is possible to drill these holes and stacking of sheets if you find that easier.

Laying slate on the roof, how to do it with their hands ↑

The drain is set before the start of roofing work. Slates began to be laid from the bottom row.

How to put the slate on the roof ↑

The leaves are cut with a hacksaw or grinder. Sections of paint over paint that the asbestos is not crumbling. 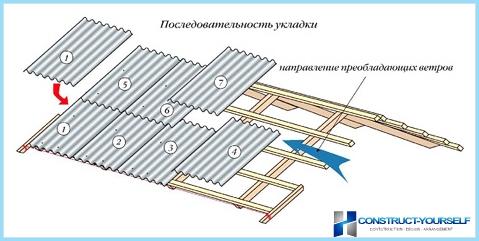 How to fix the slate roof ↑

Mount paintings of roofing material to the sheathing is an important stage, which determines the strength of the roof and the integrity of the slate in the process of operation. It should be borne in mind seasonal deformation and movement of roof systems and slate, increased loads on the roof in the winter time.

Nails for slate and screws ↑

Mount the slate on the roof to the sheathing perform slate steel nails with a hat with a diameter of 14 mm or with screws. The head of the nail and the slate share a metal washer and a gasket of rubber or other elastic material.

Slate beat a normal hammer. Nails inserted into pre-drilled hole and clog not until the end, and that the slate didn’t move. 8-wave slate score in the 2 nd and 6-th wave from the junction, 7 – wave — in the 2 nd and 5 th, respectively. Vertical beat sheet in two places to the crate. The distance from the nail to the edge of a cloth not less than 15 cm, So move to the ridge.

It is important! Bend the nails from the crates, if they are long, not recommended. It is better to cut to the desired length.

The device junction to the chimney ↑

If the house has a stove on the roof you want to make a bypass for the flue pipe. For the chimney on the roof slope, the junction is arranged differently depending on, there are waterproofing or not. In the presence of waterproofing the junction of steel sheet installed under the slate and film, and in its absence do so that the upper edge of the steel sheet was under slate and the lower the incline of him. Diagram of the device of an adjunction is shown in figure.

The device of the roof ridge ↑

Device skate — final stage of the installation of the roof. The ridge protects the roof from water penetration, provides ventilation, is a decorative element of the roof.

The ridge of the roof slate is made from galvanized steel or finished skating elements under the color of the leaves. Cut a sheet of galvanized steel the right width and bend in the bending machine or by hand to the angle of the bend was slightly less than the angle between the leaves rays. For fastening of the skate use the same nails. How to install the skate shown in figure. 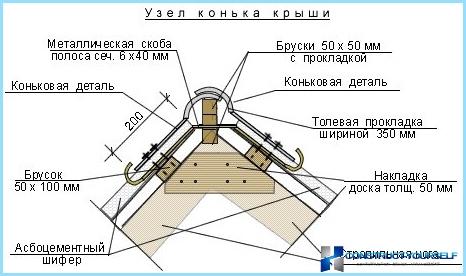 How much is roofing slate ↑

Installation of a slate roof — it’s not complicated, it is a strength to those who are familiar with hammer and hacksaw, has enough time to work. Wave slate is 170-260 RUB over the sheet that is from 90 to 135 $ /mTwo. On average, considering fastening materials and sealing, the price of the roof with their hands will cost about 200 $ /mTwo .

When time to cover the roof with slate, with your own hands is not enough, you can hire a team. The cost of laying slate will be from 150 to 300 RUB/mTwo. If you need to install truss system, heat, steam and waterproofing, lay the slate, the work will cost from 700 to 800 $ /mTwo .