A relatively new unit that restricts the access of unauthorized persons on private property, whether apartment or enclosed land, is an electromagnetic lock (EMZ). The principle of its work is to use a powerful electromagnet that holds the door closed until, until the winding current flows. Perhaps the management of such locking device from any distance, as well as full automation of the opening and closing of access to the object. 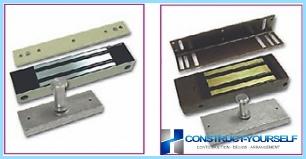 This equipment has significant differences from the traditional mechanical units:

The electromagnetic lock on the door has several important characteristics that you need to know before you purchase it. We are talking about the holding force of the door and the residual magnetization.

The holding force of the door ^ the

Any unit of this kind has a sufficiently large mechanical load on the separation, measured in kilograms. It usually varies from 100 to 1000 kg and more. Products of almost all manufacturers has a step between the individual models in the 50 – 100 kg.

Sometimes, even a door with a disabled lock is difficult to open. This happens for the reason that residual magnetism electromagnetic lock mounted on it, is too large because of a violation by the manufacturer of the technology or incorrect selection of the parameters of the magnetic material. This figure should not exceed 1.5-2 kg.

Installation of electromagnetic locks on the door ↑

The installation of the equipment shall be in accordance with the manufacturer’s instructions included in the package. This is usually done this way:

ATTENTION! Mounting the electromagnetic lock on the door with his hands, do not overly tighten the nut on the second level, she should be able to bounce a little due to the rubber gasket, thus providing intimate contact with the magnet!

The use of EMRs in a single scheme with intercom ↑

Monitor installation of video intercom is made in the room, and its power is supplied from the mains of 220 V. the Electromagnetic mortise lock or surface mounted on the gate, made either of wood, or metal. Its power is provided by guided contacts, which are located on the outside panel. Own power supply EMR is in place and gets power from a household outlet with a voltage of 220 V. From EMZ conducting cable with a cross section in polkadraai if the distance does not exceed a few tens of meters, or half a square if a is greater than.

EMZ on the metal door ↑

Without exception, this kind of device, regardless of where they are installed, have a common principle of operation and design. The only thing different electromagnetic locks for metal doors is their large capacity. Given the strength of the door leaf, it makes sense to apply this model, which has the power to keep the door from 500 kg.

EMZ, are equipped with a controller ↑

Autonomous controllers are used in conjunction with EMR to restrict access to the residential apartment buildings, office buildings and industrial facilities. Electromagnetic lock controller can be used in a single system with this equipment:

Also EMZ, equipped with controller, compatible with PC, which keeps a database of keys, as well as their operational shift as unloading and loading.

There are a very large number of different models of this equipment, here are some of them that are popular on the market of our country, with a short list of their characteristics. 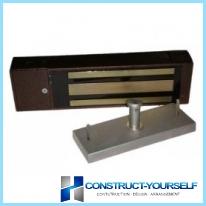 The ML400 lock solenoid used to lock the front door, the thickness of which is 30 – 50 mm., It shall be on the inner surface of outward opening doors fitted with door closer. The holding force of the Assembly is 400 kg, the power is supplied to it under voltage 9 – 15 V, the power consumption does not exceed 7.2 watts. Unlocking occurs when the current is switched off. 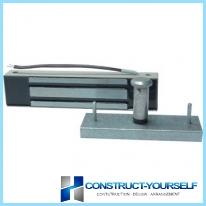 Miniature ML-180K, electromagnetic lock, used mainly for interior doors and cabinets agencies and offices. It has a holding force of 180 kg, receiving power from a source with voltage of 12 V, while consuming no more than 0.4 A current. An important feature of this model is that its remanence is zero. 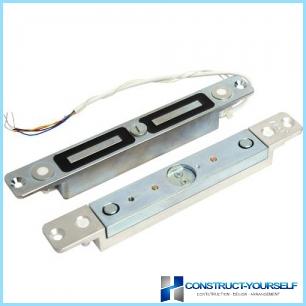 The electromagnetic shear lock universal AL-400SH has a strength retention at 400 kg, is powered by 12 or 24 V, while consuming 0.9 A current. The equipment is installed secretly, is equipped with a reed switch and the sensor controlling the door lock. There is the possibility of removing data on the state of the door on guard. 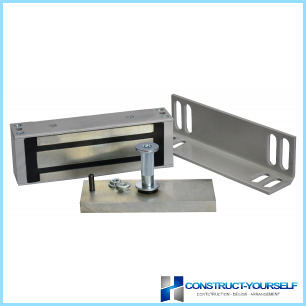 The lock electromagnetic ML 300 with a holding force of 300 kg working voltage 12 V and consumes at the same 0.33 And current. Its purpose is installed on the entrance doorway.

In the product design is mounted oscillation circuit, providing it with a zero value of the residual magnetization. 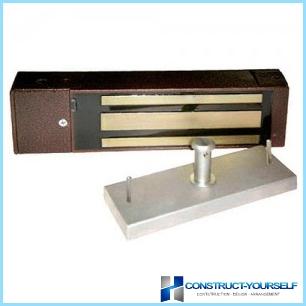 ML 194k, electromagnetic lock with holding force of 500 kg component, a device with the purpose of access control and fire using the spare inputs. Lock design robust and resistant to wear and tear, a display operation with the help of sound and light. The equipment is operated from voltage of 12 V, current requirement is 0.7 And. 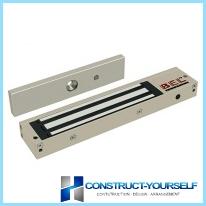 Bel 600s, the electromagnetic lock powered by a power source with voltage 12 and 24 V, consuming 0.48 And current. He develops a retention force of 300 kg. the Installation of this unit is on the door standard sizes and shapes.