Pass switch is a switch which makes it possible to turn on and off lighting controlled by this mechanism the lamps from several locations.

Despite the relatively high cost, there are times when it is necessary. Here are the examples of these cases.

The General principle of the pass switch ↑

Work pass switch is carried out by switching the reverse of the conductors, the contact between them is established by connecting terminals. Connecting all of them together happens in the junction box. With one of the switches connects the supply conductor. By another of the same device, this conductor is in contact with a conductor of light. Both have phase the principle of operation and therefore installation is carried out only with the use of three-core wire.

Attention! All of the above regarding the number of conductors used and the necessary contacts, as well as quantitative characteristics of the wire used is correct only if you install the wired switch with two places of lighting control.

The number of points control switches are divided into set in one place, two places, three places, etc.

According to the method of control of these devices are: 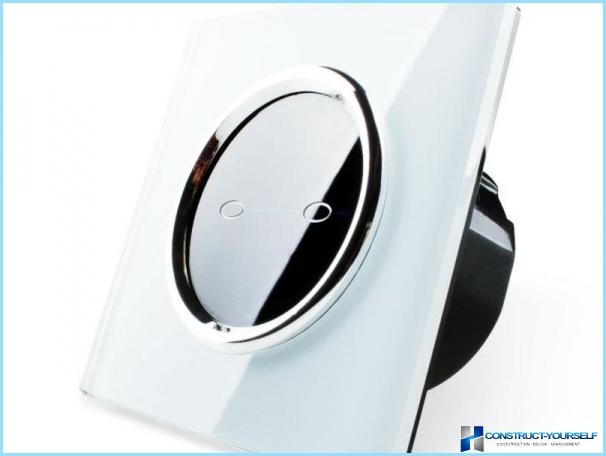 If there is a desire to throw dust in the eyes, such a touch thing, but still not in the same instance will be most welcome, there is nothing to say.

If managing the switch by using the keys, then the number of them that meet this condition, the device is divided into:

It should be noted that the control method switches not have much effect on the way it is installed. More important are other factors.

In principle, the method of setting the passing switch and method, by which the lock switch is set in three places, there are a few differences. The main one is that the third switch device is substantially different from marching, which is used in most cases, the installation of such devices. Similar switch with a special device called a cross. This device can perform two functions:

If the passing switch with two control points has three pins, then a similar device with three control points has five contacts: two contacts make a connection with one of the main switches by means of two the connection is made with another of the main switches, and the remaining one contact transit performs the function (most often, this contact is through the jumper is connected with the third terminal of the pass switch.) A particularly important role is played by the so-called transit contact: as a result of its functioning it becomes possible to realize lighting control from three points.

Similarly, is the installation of the passing unit to turn on the lights with three or more control points.

Please note that the scheme described here is good for its simplicity, but have one drawback: they are suitable only to a limited number of control points.

When you need to buy series switch? For example, if in a large room with a few lights and sometimes the owners would like that their room was like the shining room or be a small company. To ensure this diversity of situations, sometimes you need to turn on all the lamps in the room, and sometimes only some. This will help to cope series mechanism control lighting.

As a rule, the entrance series represents the Union of two one-button switches in a single external enclosure.

The internal construction series switch, the combination of two groups of contacts that are not associated with each other. Just use six contacts, of which two are input and four output. When someone presses the switch, two input contacts interrupt the interaction with the two output of the first switch and switch to two output contact of the second. 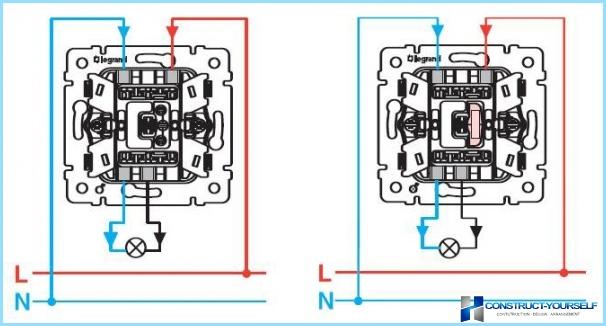 In this first one, electricity is supplied via a single wire, and the two parts of the wire are connected through a jumper, and the second weekend is divided into phases: each phase corresponds to one of the devices and carries out the supply of electricity.

So, in order to carry out installation series device, you must perform the following sequence of actions:

It is important! Before installing this cable, ensure that it is not energized!
Attention! The ends of the wires connected to junction box have to stay with a stock of 10-15 centimeters.

So, it can be considered completed. To carry out installation pass switch with three keys or even more, actions will be the same.

In conclusion, we make the following observations:

Those who prefer specific examples of common descriptions or just more like diagrams than words, can you look at the videos: