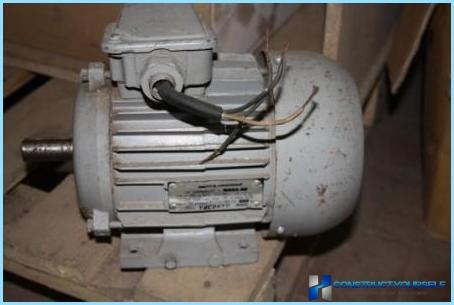 Sometimes that falls into the hands of three-phase motor. It is from these engines made homemade circular saws, emery machines, and various grinders. In General, a good boss knows what you can do with it. But the trouble is, the three-phase network in private homes is very rare, and to spend it is not always possible. But there are several ways to mount this motor to 220V.

It should be understood that the power of the engine with this connection, no matter how you try – will fall significantly. So, the connection «triangle» uses only 70% of engine power, and «star» and even less – only 50%.

In this regard, the engine it is desirable to have more powerful.

It is important! Connecting the motor, be very careful. Just take it slow. Changing the circuit, disconnect the power supply and discharge capacitor with light bulb. Work produce at least two.

So, in any scheme of connecting capacitors. In fact, they serve as a third phase. Thanks to him, the phase is connected to one lead of the capacitor is shifted as much as necessary to simulate the third phase. Despite the fact that the engine uses a capacity (work), and to run another (launcher) in parallel with working. Although not always necessary.

For example, for a lawn with a knife in the form of a sharpened blade, it will be enough units of 1 kW and capacitors only workers without the need for the tanks to run. This is due to the fact that the engine startup idling and he has enough energy to spin the shaft.

If you take a circular saw, a hood or other device that gives the initial load on the shaft, then there is no extra capacitor cells to run can not do. Someone might say: «why not connect a maximum capacity that not only was not?». But not so simple. In this connection the motor will be overheated and may fail. Not worth risking equipment.

It is important! Whatever capacity was not the capacitors, the working voltage must be below 400V, otherwise they will last a long time and can explode.

Let us first consider how a three-phase motor is connected to the network 380. ↑

Three-phase motors are, as with three terminals — for connection only to «star», and with six joints, with a choice of schemes ? a star or a triangle. The classical scheme can be seen in the figure. Here in figure sivasubramania connection star. In the photo on the right shows how it looks on a real race motor. 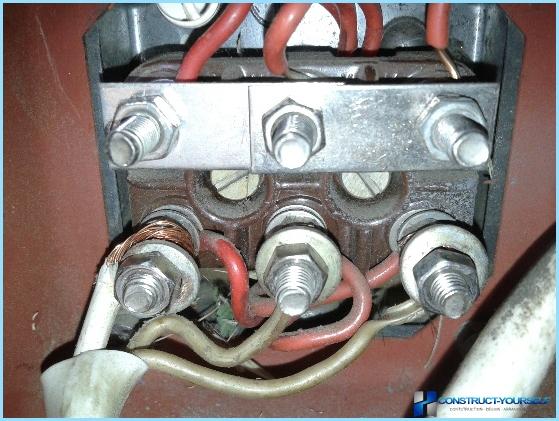 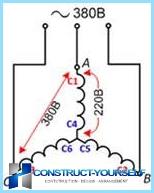 It is seen that this requires a special jumper to the desired output. These jumpers are supplied with the engine. In the case where there is only 3 pins, the connection is a star already made inside the body of the motor. In this case, to change the winding connection scheme is simply impossible.

Some say they did it to ensure that workers did not steal the units home for their needs. Whatever it was, the engines can be successfully used for garage purposes, but their power would be significantly lower than the United triangle.

As can be seen, the voltage of 220V is divided into two serially connected windings, each designed for such tension. So you lose power almost doubled, but the use of such an engine is possible in many low-power devices.

The maximum power of the engine at 380V in 220V can be achieved only using the connection in the triangle. In addition to the minimum losses of power remains unchanged and the number of revolutions of the engine. Here each winding is used at its working voltage, hence the power. Connection diagram of this motor is shown in figure 1. 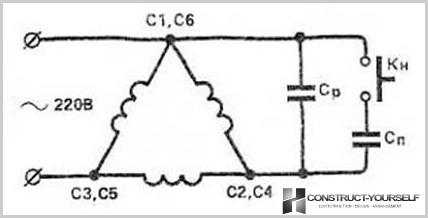 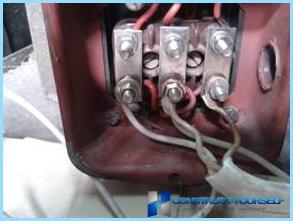 In Fig.2, depicted Brno with the terminal 6 of the findings for connectivity of a triangle. Three of the resulting output is fed: phase, zero and one lead of the capacitor. From where is connected the second terminal of the capacitor ? phase or zero, depends on the direction of rotation of the motor.

Photo: the motor only to work without capacitors of containers to run. 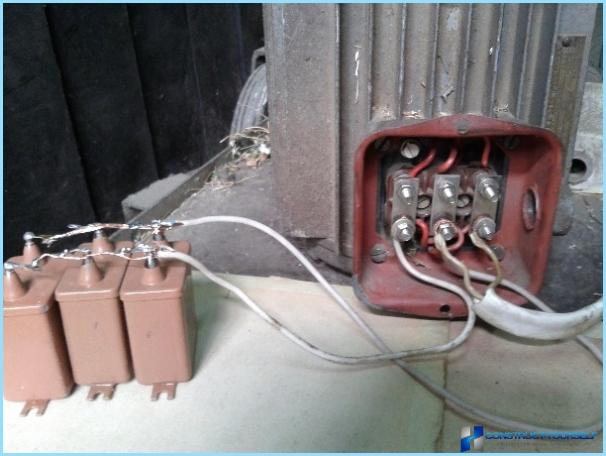 If the shaft will be the initial load, it is necessary to use capacitors to start. They are joined in parallel with work using the button or the switch at the time of inclusion. Once the engine has reached maximum rpm, the capacity to run needs to be disabled from working. If it’s a button, just let it go, and if you switch, then disconnect. Then the engine uses only the working capacitors. Such a connection is shown in the photo. 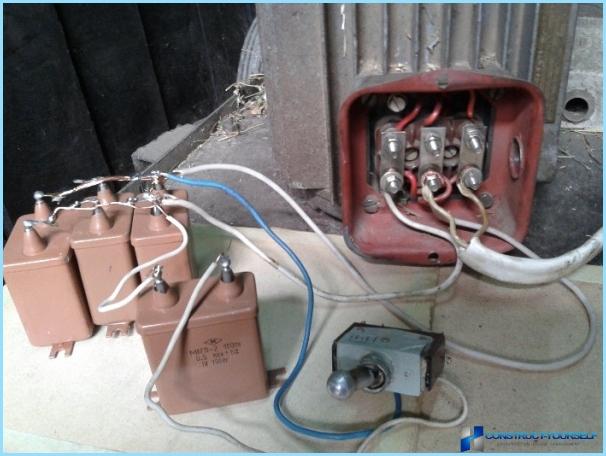 How to choose capacitors for three-phase motor, using it at 220V. ↑

The first thing you need to know ? the capacitor must be nonpolar, that is not electrolytic. It is best to use the capacity of the brand ? MBGO. They are successfully used in the USSR and in our time. They stand up beautifully to the voltage, current surges and the damaging effects of the environment.

They also have eyelets for attaching that can help without problems to arrange them in any point of the Cabinet. Unfortunately, to get it now is problematic, but there are many other modern capacitors are no worse than the first. Importantly, as mentioned above, the working voltage is not less than 400V.

The calculation of the capacitors. Capacity of working condenser.

To not refer to the long formulas and torment your brain, there is a simple way of calculating the capacitor for the motor at 380V. For every 100 watts (0.1 kW) take — 7 UF. For example, if the motor is 1 kW, it is calculated as: 7 * 10 = 70 µf. This capacity in a jar is very hard to find and expensive. Therefore, most of the tanks connected in parallel by typing the desired capacity.

The capacity of the starter capacitor. ↑

This value comes from the calculation of 2-3 times more than the capacity of the working capacitor. Note that this capacity is taken in the amount of work, that is for motor 1 kW, the working is 70 µf, multiply it by 2 or 3, and we obtain the required value. This is 70-140 UF additional capacitance launcher. At the moment when she connects with working and the amount of turns — 140-210 UF.

The peculiarities of selection of capacitors. ↑

Capacitors both workers and the launcher you can choose the method from the lesser to the greater. So choosing a medium capacity, can be gradually added to and follow the mode of operation of the engine, that it does not overheat and had enough power on the shaft. Also the starting capacitor select adding until it will run smoothly without delays.

In addition to the above type of condenser — MBGO, you can use the type — MBGC, MBGP, KGB and the like.

Sometimes you need to change the direction of motor rotation. It is available for motors at 380V, is used in single phase. For this you need to make the end of the capacitor connected to the separate winding, remained inextricably linked, and another could have one coil where is connected «zero», to another where — «phase».

Such an operation can do the dip switch on the center contact of which is connected the output from the capacitor, and the two extreme output from «phase» and «zero».

More details can be seen in figure. 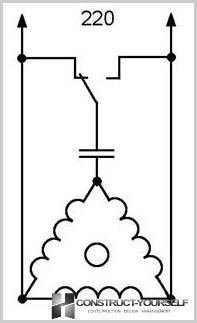 It is important! There are electric motors three phase for 220V. They have each winding is designed for 127V and when plugged in odnofaznye scheme «triangle» ? the engine will simply burn out.To avoid this, the motor in single-phase network should be connected according to the following plan — «star».
Content related