There are cases when you need to connect the motor to 220 volts – this happens when attempting to attach equipment to their needs, but the scheme does not meet the specifications, specified in the passport of such equipment. We will try to analyze in this article the main methods of solving the problem and present several alternative schemes for connecting single-phase motor with condensate at 220 volts.

Why is this happening? For example, in the garage, you must be connected asynchronous motor at 220 volts, which is designed for three phases. Thus, it is necessary to maintain the efficiency (coefficient of performance), to do so if the alternatives (in the form of the engine) simply doesn’t exist, because in the circuit of three phases are readily formed by a rotating magnetic field, which ensures the creation of conditions for the rotation of the rotor in the stator. Without this, the efficiency will be less in comparison with three-phase connection diagram.

When in single-phase engines, there is only one coil, we see a picture when the field inside the stator does not rotate, and pulsate, that is, push to start does not occur until himself not to spin the shaft. To the rotation could happen on their own, adding auxiliary starting winding. This is the second phase, it is displaced by 90 degrees and pushes the rotor when you turn. This engine is still included in the network with one phase, so the name remains a single phase. Such single-phase synchronous motors have a starting winding and a working. The difference is that the launcher only works when you turn on a factory rotor, working just three seconds. The second winding is connected all the time. In order to determine which is which, you can use the tester. In the picture you can see the ratio of their scheme in General.

Connect the motor for 220 volts: the motor runs by feeding 220 volts to work and starting winding, and then set the required speed manually need to disable the launchers. In order to phase shift, it is necessary ohmic resistance, which ensure the capacitors of the inductance. Meets resistance in the form of a separate resistor and of the starting winding, which is performed in the bifilar technique. It works like this: the inductance of the coil is maintained, and the resistance become greater because of the elongated wire of copper. Such a scheme can be seen in figure 1: connection of the electric motor 220 volts. 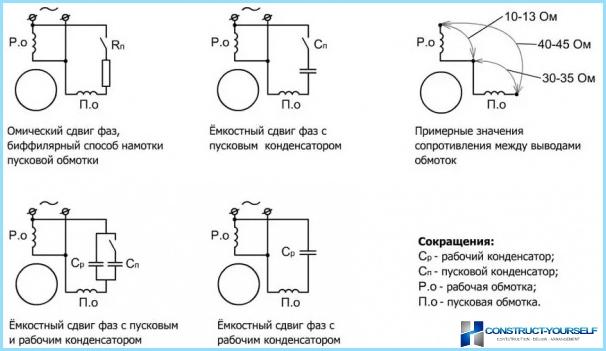 There are also motors that have both windings continuously connected to the network, they are called two-phase because the field inside is rotating and the capacitor is provided to shift the phase. For such a scheme, both windings have a wire with equal cross section.

Where you can meet in everyday life?

Electric drills, some washing machines, drills and grinders are synchronous manifold of the engine. He is able to work in networks with a single phase even without the triggers. The scheme is as follows: jumper connect the ends 1 and 2, the first originates in the anchor, the second – in the stator. Two of the tip, which was necessary to attach to the power supply 220 volts. 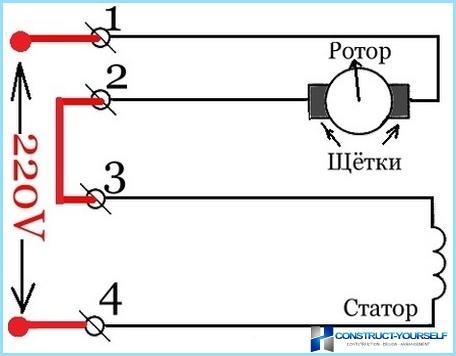 The connection of the electric motor 220 volts with starting winding

Wiring diagram of the motor 380 at 220 volts with capacitor ↑

There is another connection for the motor power at 380 Volts, which is set in motion without load. It also requires a capacitor in working condition.

One end is connected to zero, and the second to the output of the triangle with number three. To change the direction of rotation of the electric motor, is to connect it to phase and not to zero.

In the case where the engine power more than 1.5 KW or is it when you start working directly with the load, with a capacitor in parallel you need to install and launch. It serves to increase the starting torque and is included only for a few seconds during start. For convenience, it is connected with a button, and the entire device from the power supply through a toggle switch or button with two positions, which has two fixed positions. In order to run such a motor, it is necessary to connect a button (toggle switch) and hold the start button until it starts. When start up – just release the button and the spring opens the contacts, disabling the starter 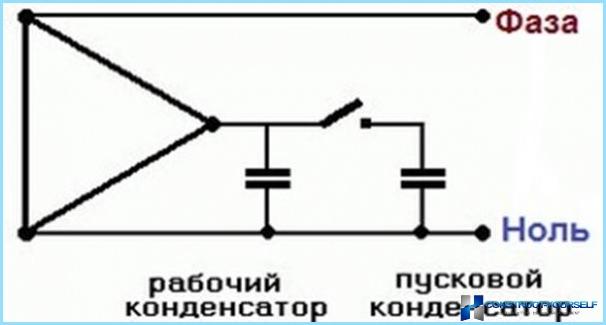 The specificity lies in the fact that asynchronous engines originally intended to connect to a network with three phases 380 V or 220 V.

It is important! To connect single-phase electric motor to single-phase network, it is necessary to have data of the motor on the tag and know the following:

According to the formula it becomes clear that the electrical power exceeds the mechanical. It is the necessary reserve to compensate for power loss at startup – create a rotating moment of the magnetic field.

There are two types of windings – star and Delta. According to the information on the tag of the motor you can determine which system it uses. 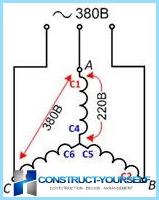 Red arrows – the distribution of voltage in the windings of the motor, says that on one winding distributed voltage single phase 220V and the two – line voltage of 380 V. This engine can be adapted for single-phase network according to the recommendations on the tag: learn what stresses created by winding, you can connect them in star or triangle.

The scheme of the winding triangle is easier. Better to use it as the engine will lose power in a smaller number, and the voltage at the windings is everywhere equal To 220.

It is important! If at the start not to turn off time the starting capacitors when the motor attains the standard for him is momentum, they will lead to a large bias current in all the windings that simply ends with the overheating of the electric motor.

After reading the article, take a look at appliances connection three-phase motors in single-phase network: