Those associated with agriculture, whether in rural areas or simply gardeners, know that one of the most important types of agricultural work is providing irrigation in the summer and dry season. Despite the fact that many agribusinesses are using mobile sprinklers, the problem of irrigation is still relevant. 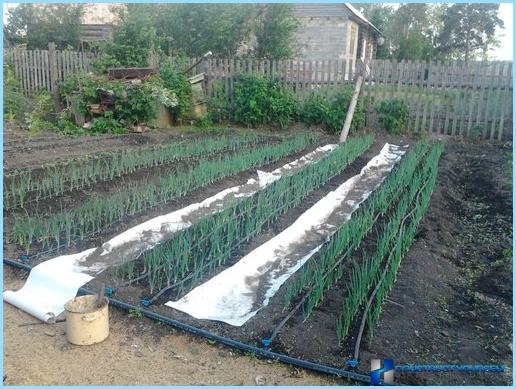 The fact that such devices operate mainly only surface irrigation, which is not enough for normal growth and development of plants. Basically moisture stays on the leaves of plants before reaching the roots sufficiently. Also, if you increase the standards of water supply possible waterlogging of the soil, which also should be avoided. In addition, when you use a sprinkler system possible water waste. 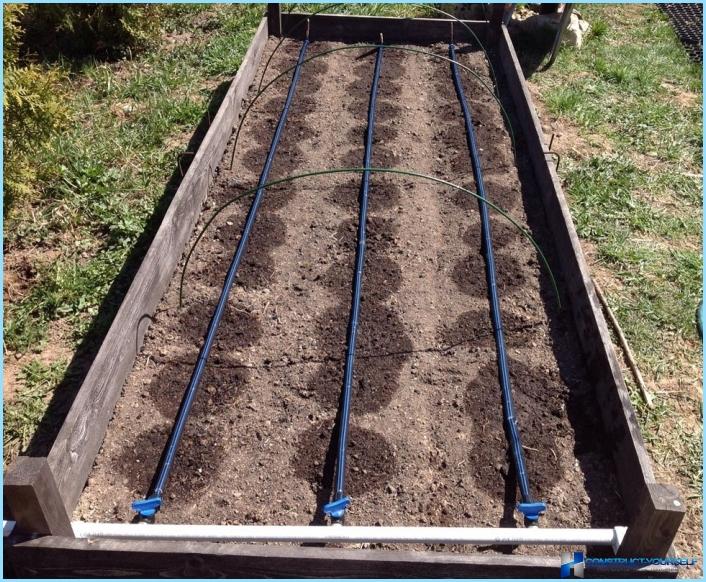 Currently, the majority of foreign and Russian farmers resorted to a more efficient method of soil moisture, namely drip irrigation. For the first time this method was used in 50 years of the last century and only in industrial scale. Drip irrigation proved to be quite effective, and this was the reason for its rapid spread. This method was adopted not only to large agricultural farms, but also the owners of cottages and small plots of land.

The advantages of drip irrigation ↑

The main advantages of drip irrigation are as follows:

The Russian market presents a variety of types of automatic irrigation systems. However, they are relatively expensive and have certain disadvantages, due to which not every cottager or small farm can afford such an acquisition. However, you can choose another option and to make the system their own hands. Before proceeding to the arrangement of watering, you should first familiarize yourself with some features. 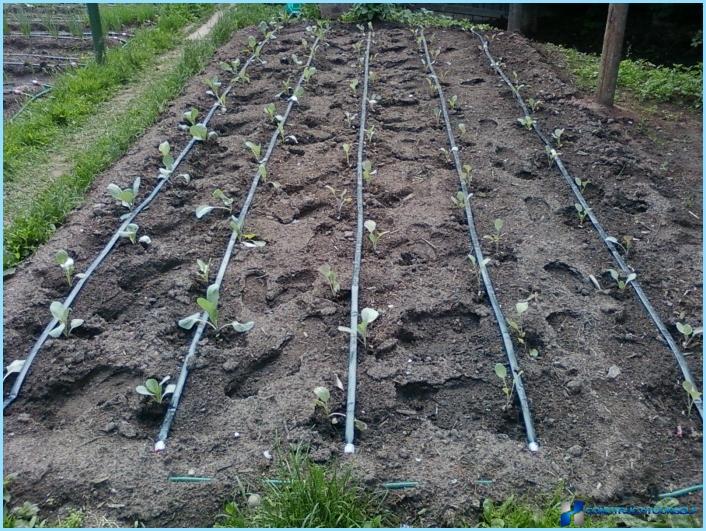 You should consider each of these types of and we should start with the simplest option. 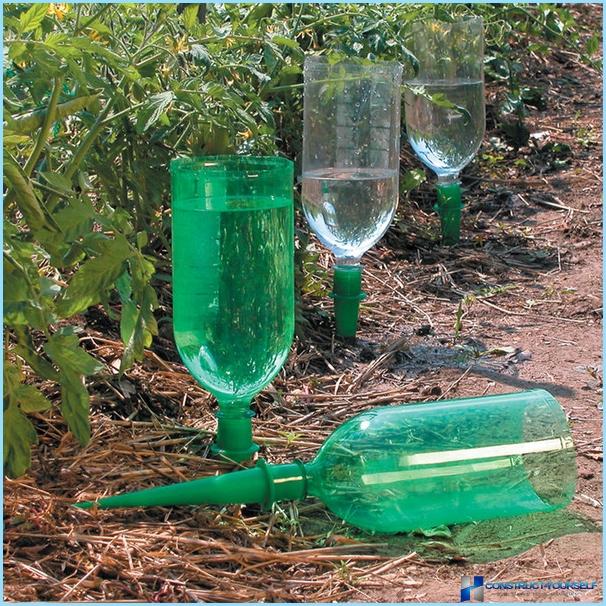 This option is the most simple and cheap as as the main material used in plastic bottles and there is no need to install water tanks. Such a system may not provide full irrigation, but to maintain moisture-loving plants during the intense heat it. 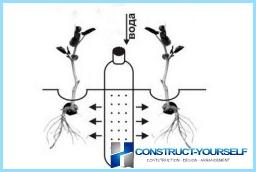 Plastic bottles of 1.5-2 liters buried to the neck with the lid in the garden near plants. A heated awl or a thick needle holes in the sides of the bottle. The container should be positioned in such a way that each of them had three or four plants. Through the pipe to pour water.

It is important! Liquid is enough for about three days, and then re-fill the bottle. 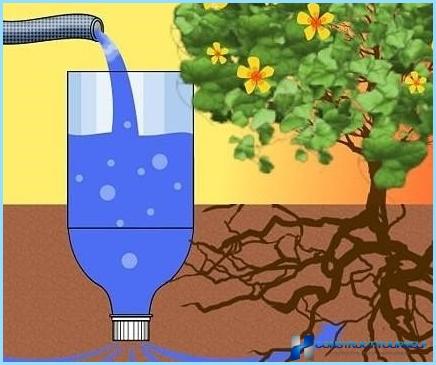 Second variant with plastic bottles to promote capacity neck in the ground, as shown in the figure. When the bottle is cut at the bottom.

This system has several significant shortcomings: 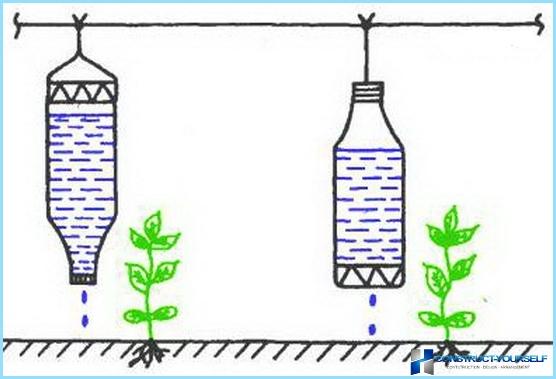 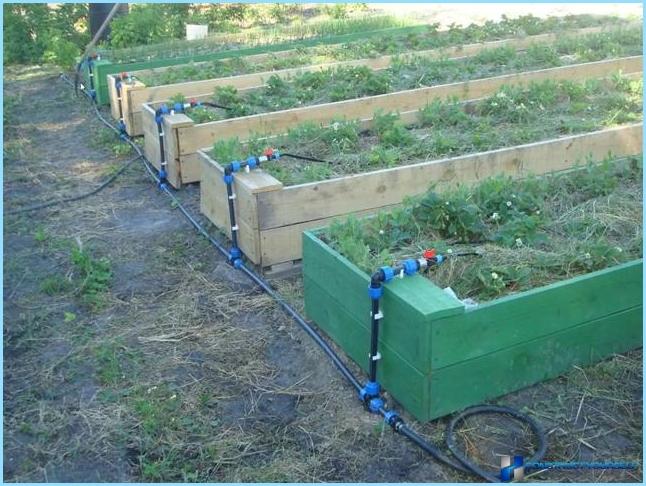 You can also collect own simple drip irrigation system of delivery hoses and droppers. For this you will need the following materials:

The Council! To create and install a drip irrigation system is recommended before will started the spring field works, but in principle this can be done in any suitable for you time.

Device, drip irrigation system should begin with the preparation of the site plan, which will include plants and location of hoses, sprinklers and valves. Mark the location of all connections to know how much tees, plugs, fittings and shut-off valves. 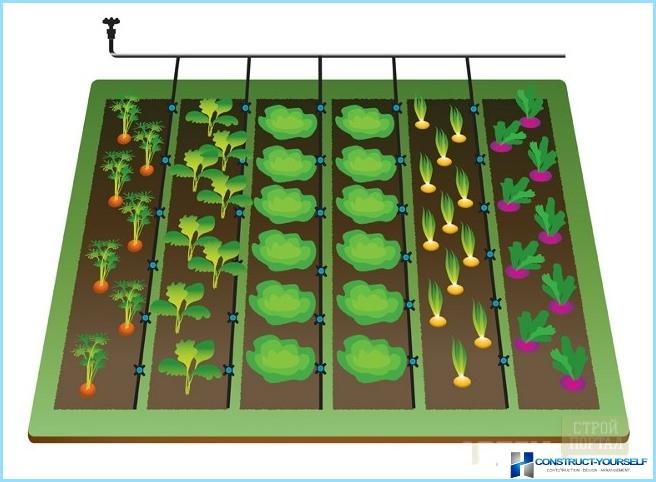 After an extensive plan, you can proceed to the selection of the necessary equipment. Better to give preference to plastic pipes that are used in the main water supply system because they are lightweight, low cost and resistant to corrosion. Moreover, with the help of such pipes may be submitted to the place of watering plants with fertilizer dissolved in water. 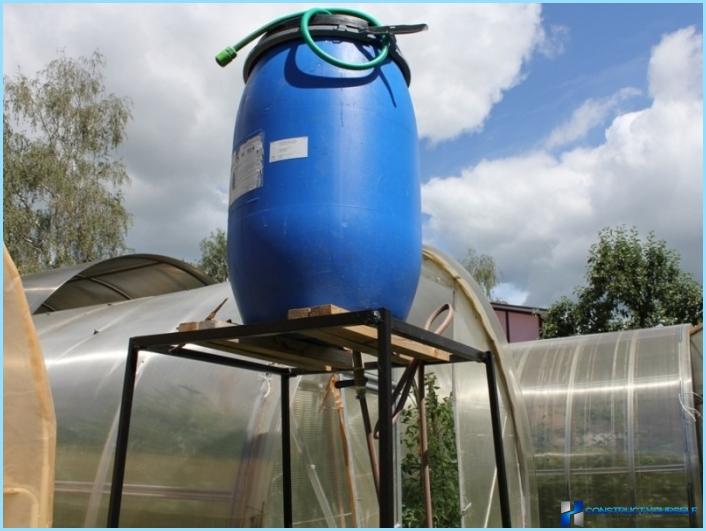 Also, consider bringing water to the site. If not it provides water, the most economical option is to install at a height of 2 meters capacity of appropriate size. There should be shading the tank from direct sunlight. Pipes and hoses placed on the ground, heel up or down on supports. Easiest to lay the irrigation system on the ground, but in this case, as with the suspension option, it is necessary that the hoses and pipes were made of opaque material, in order to avoid algal blooms. In embedded mode, it is necessary to choose thick-walled pipes. Also improvised a watering system will need filters for water purification, which will reduce the likelihood of clogging of drip tapes and hoses.

After the beds are broken, you can begin to assemble the drip irrigation system. It is also worth considering that before the first watering, be sure to completely flush the entire irrigation design, why remove the caps and open the valve with water. The flow stops after from the hose runs clear transparent liquid. 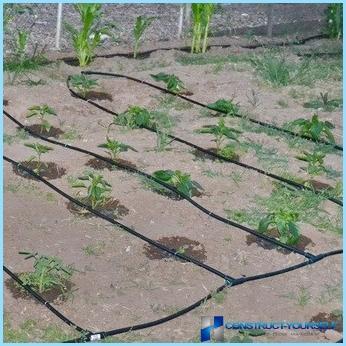 If you do not have enough funds to purchase drip irrigation systems production plant, we can create it with their hands, and she practically won’t concede to industrial setting. The fact that this system essentially is a scaled analogue of a medical dropper.

For the manufacture of a drip irrigation system will require: 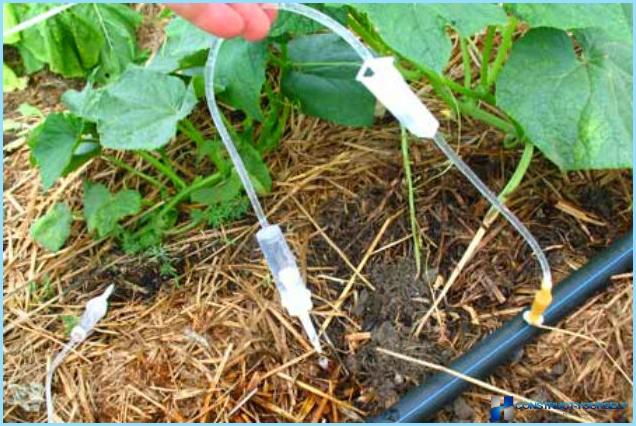 In the garden hose, which is connected at one end with a shut-off valve and filter to the General water system, and the other is sealed by a plug, using a regular sewing to be done at an equal distance from each other small holes and insert them piece medicine dropper with needle, clip and filter. Next, lay out his IV tubes under the plant, and using the clamp to regulate the flow of water. Do not forget to regularly change the filter. Replacement frequency directly depends on the availability of different weights and degree of contamination of tap water. It is also worth to say that such a system of drip irrigation, only in a reduced size, can be used not only in the garden, but in the home, for example when watering flowers on the balcony.

There is no doubt that such a homemade drip irrigation system inferior to expensive automated analogues in technical characteristics, service life and ease of use. However, the cost to create is minimal and it is possible to afford to replace the system of drip irrigation, in whole or in parts each new holiday season.

During long-term operation, factory or improvised drip irrigation system it may be contaminated, and therefore decrease its effectiveness. In the event that observed a decrease in the number coming from drips of water, it is necessary to disassemble the system and clean all components. To reduce clogging and frequency of flushing should be at the beginning of the system to install a good quality water filter. 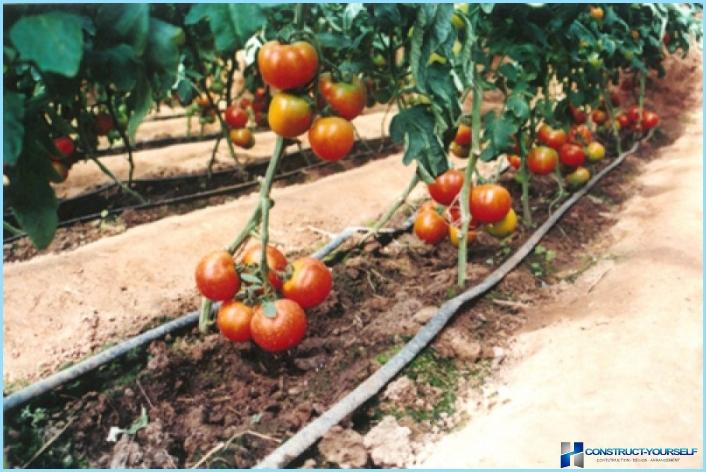 Problems that could be solved with usage of drip irrigation system ↑

Drip irrigation on a country site must be designed with required amount of water for different species of plants. You must first create the diagram laying water hoses and however plan places planting plants that require a certain amount of water. 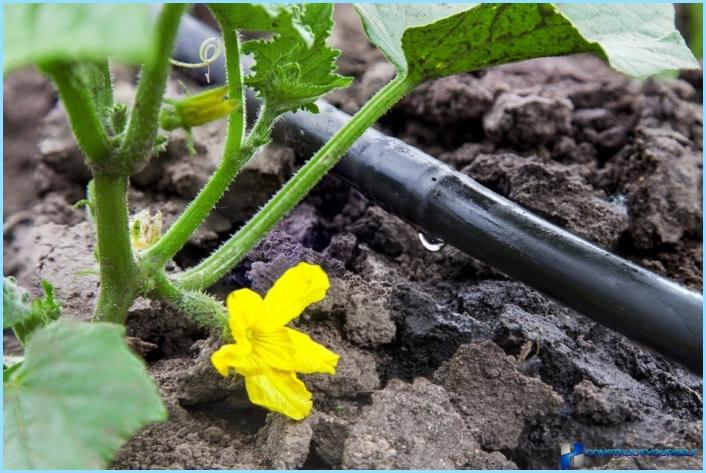 Of course, the installation in the suburban area of an irrigation system requires certain financial and physical costs. However, only once, making the investment in the creation and development of drip irrigation, you can forget about constant running around with watering cans and buckets. Automated system allows you to set desired mode of irrigation, and the water will flow to the plants in a strictly specified time in the morning and evening. In the event that the summer will be very dry, it is possible to increase the amount of fluid supplied, and in the rainy season, on the contrary temporarily completely disable watering or to reduce the amount of water used.

We offer you to watch a video about the organization of an irrigation system in the garden and on the plot.