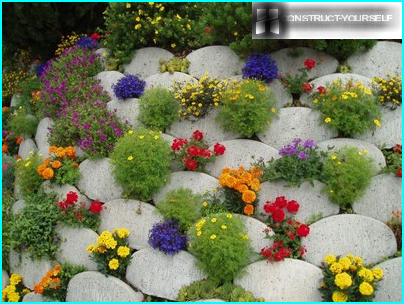 Spring days are looking forward to and gardeners, and their gardens to give a start to the new season. But most often the first month of spring only on the calendar shows the changing seasons. In reality, continue to fry the cold, drifts of snow lie, and seems to be in the garden yet to do nothing. In fact, in March, felt the approaching heat, extended day, and the trees slowly begin to emerge from a period of hibernation. So some of the work in March in the garden is still carried out. Not so much as to be in may, but the yield of fruit trees and abundant flowering ornamental shrubs depends largely on the March care.

How to use the snow with the benefit of?

In temperate climates almost until the half of March in the gardens of the snow. But because of the daily thaws, it becomes loose, wet and heavy. If branches of trees and bushes (especially young!) covered in luxurious hats, arm pointed a long stick and Strachowice them. A lot of weight adhering snow can easily break branches, because they have not acquired the elasticity and remain fragile, frozen. 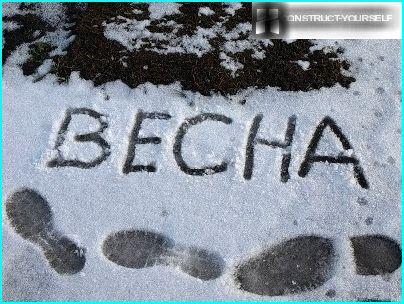 The snow on the lawn and under the trees stamp down not worth it ,otherwise it’s too wet will compact the soil and block the access of oxygen to the roots

In low-lying places where there are drainage, also remove the snow and clear the intake grooves. Excess dampness is not good here, so it is possible to reduce pre-clearing the land.

However, all available snow on the ground you need to use it profitably. Remove snow with a shovel layer from the beds below those faster warm up, and place in a borehole circles of trees. He’s going to halt the rapid thawing of the roots, which in March is quite dangerous. Dark soil warms up quickly, and the SAP flow may start before held the night frosts. And the living, awakened by the branches is very sensitive to freezing temperatures and a quick freeze slightly. With a large amount of snow, divide it between the trees, raspberries and raised beds with strawberries. 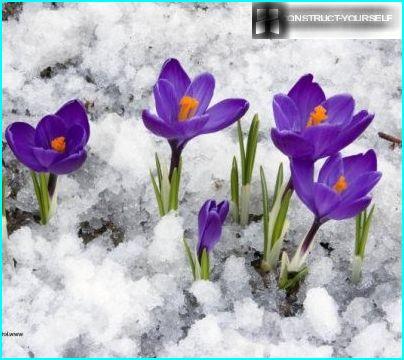 If you sprinkled the cuttings, twigs for grafting, then sketch them on the snow and top with a sprinkle of sawdust. They will reflect the sun’s rays and slow melting snow «coats». Who does not have time to prepare the cuttings in the fall, can cut them now, assuming that this year the winter was not too frosty (not below -25°). They are hidden in the same snow piles with a cap of sawdust on top.

In areas with a strong bias is to create out of the snow horizontal shafts. They will hold snow during the melting, and the earth will get more moisture. But sheltered in winter, the rose bushes, rhododendrons, hydrangeas and other heat-loving culture with the arrival of warm days is necessary to slightly open, giving access of air to the roots. In this case you will prevent the formation of mold, which loves special places with high humidity. 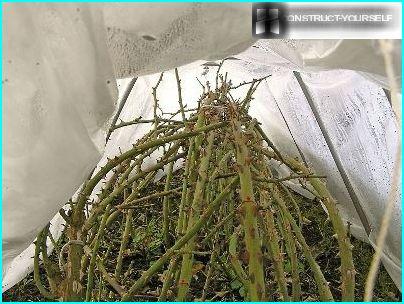 Day under the film hidden roses formed vapor, which the night settles on the plant condensate. To avoid fungus, discover a film with two sides

A set of measures for the prevention of burns the trees

Since March is still often observed fluctuations of temperature from sub-zero at night to +10-12 degrees during the day, Cora is unable to adjust quickly to such a regime. In the end, the sunlight, the trunks and branches will sunburn, and a night – monotony. To protect the garden from damage, in early March (and not before Easter!) spend the spring whitewashing of trees. You can buy lime and quenching in boiling water, but you can special paint. Bleach on a calm day with zero temperature on the street. 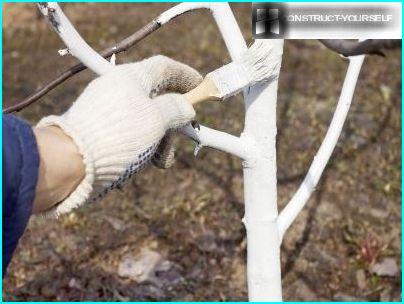 The thin bark of young trees particularly affected by differences in day and night temperatures, therefore, it is desirable to whitewash as early as possible

In addition to the trunks, are very sensitive to the sun March butcher conifers ornamental shrubs. They bravely will take the cold as -40°, but under the scorching sun gentle upper branches will immediately burn. Therefore, in early March, rare conifers (arborvitae, junipers, etc.), and the evergreen of the boxwood should cover non-woven fabric or wrap with newspaper and tie.

Planned cropping and treatment of the garden

Over the winter some of the trees could get damaged in the form of morozovoy, frozen branches, cracked bark. Prior to the beginning sokodvizhenija need to process and heal the wounds, and all that were frozen, to cut.

Wounds are cleaned with a knife until the appearance of healthy wood, coat with copper sulfate (per liter of water 10 grams) and slapped garden pitch. If you find a solution of succinic acid, it accelerates the healing. This lineup lubricate the cut places of the trunk, and then spend the rest of the treatment. 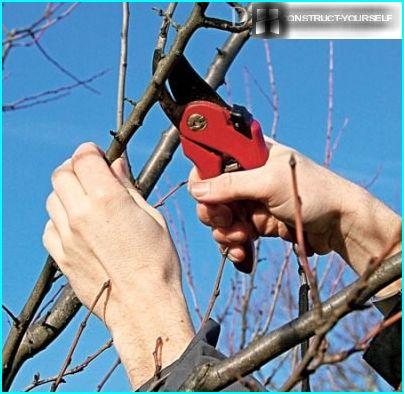 To check which branches have frozen over the winter, enough to cut off the tops and look at the wood. If it is bright, so alive, if poboril — cut more.

In March, it’s time to do your spring pruning to remove frozen or improperly growing branches. While certainly need to wait for a stable temperature above zero.

What branches are trimmed:

Try to cut to a stump. Place a saw cut over garden pitch.

Fruit bushes usually form in the fall, so in March, just correcting something that went unnoticed. Otplodonosivshih cut the branches of the raspberries, the old stems of currants and gooseberries. The tops of young twigs raspberries are pruned 10 cm below the berries were larger.

Ornamental shrubs are also pruned subject to frost-injured over the winter branches. If you fall you do not have time to trim the forsythia, lilac, Jasmine and other plants that begin to bloom early, they better not touch. Otherwise the Bush will not bloom. If they’re slightly frozen, then shorten exactly to the place where it starts the living tissue. When pruning any plant waste from burned or crushed and put in a compost pit.

Pest control — are prepared in advance

As soon as the snow melting, leaving the mouse hole and go into cellars and basements. To destroy rodents, laid out in a secluded little garden etched grains or use different bait.

Various small pests that overwinter in the bark of trees, destroying chemical and physical ways. For that, each barrel wearing a special hunting belt. 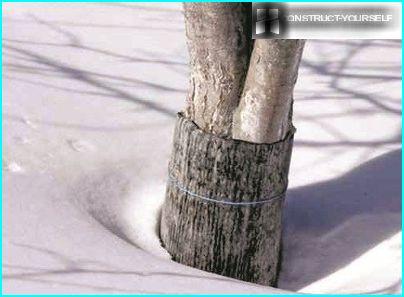 If in winter, the trunks of large trees were covered with roofing material to protect from frost, then March them off and change into hunting belt

After you restore on the street stable temperatures (over 5°) are sprayed throughout the garden for pest control. At the same time, the solution is to add drugs to prevent diseases of trees, for example, Bordeaux liquid.

For low shrubs used chemicals and a hot water treatment. Gooseberries, currants pour from a watering can, trying to get on every twig. Medium temperature is 70°. For raised beds with strawberries are enough 60-degree soul.

During the second half of March

Once the snow melts, some of the perennials and shrubs can expose the top part of the root system. Its just stiff from the ground at the movement of moisture. To keep the plant healthy, all protruding roots need mulch peat or humus. But first the plant «boost», ie, I try to return to its original place in the ground, gently crushing the soil to the roots settled below.

Thawed the lawn also requires care. It is necessary to rake the oncoming winter debris. Only use lightweight fan rakes, which are not deepened into the ground. Otherwise, you can pull from moist soil a lot of grass. If there are bald spots, podsafe these places. Unexpected morozik only harden seeds, and they sprout more friendly.

By mid-March, it is advisable to put up houses for birds, if you want to attract birds to protect their possessions from pests. Two of the birdhouses is essential for the maintenance of the garden in 10 acres. 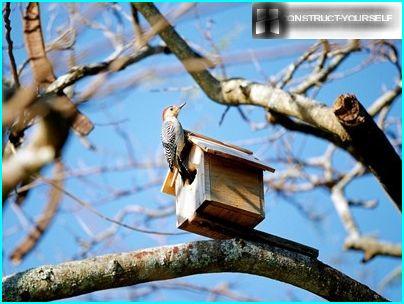 A pair of starlings will rid the site of most caterpillars and pests of trees, so do not be lazy in the winter to knock the birdhouse below in the beginning of March to hang it in the garden

At the end of the month after the thawing of the soil conduct nitrogen fertilizers. They stimulate the rapid growth of young shoots and foliage.

Grapes and roses at the end of March can be released from the winter shelter, provided that the frost has finally left your possession. 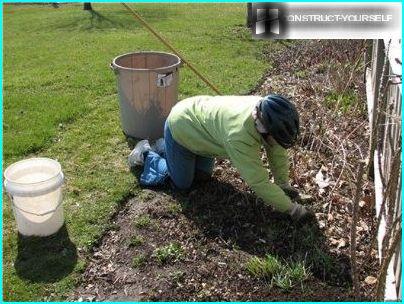 As soon as the snow finally gone from the garden and slightly warmer, you can raise on a trellis grapes, roses, raspberries, blackberries

As you can see, in March, the gardeners do not have to miss. And when you consider that this month start to sow the seeds, thinned the seedlings, some trouble would be the owners mouth full.