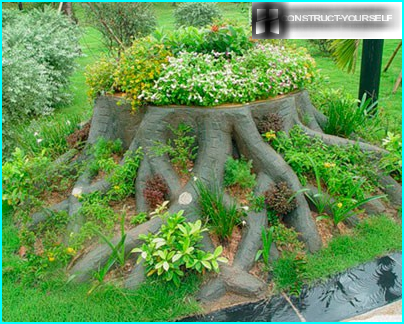 If the household is located on birch lake or river, the big problems with water supply arise. Much more difficult is the case where the land is far from natural water sources. It remains to extract water from the ground, and you need to look for natural resources that would be clean and suitable for drinking. The choice between drilling and digging well of the owners of the site do, based on the characteristics of the area. If water level is deeper than 15 meters, the imminent completion of wells must trust the professionals and if the water is closer to the surface, read this article about how to dig a well with their hands. Perhaps the process will not seem too complex.

Make a well own not so difficult as it seems, although it is necessary to work fairly. It is important in the process of execution of works to comply with the rules relating to wells. Of course, nobody will check, have you done everything you need or attitude to work formally. But you do well for yourself and your family members, so they should show interest in the resulting water was fresh and clean. 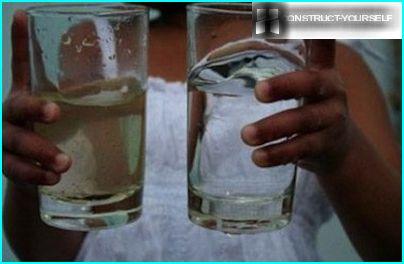 Living and dead water. Which of them will be in the structure that you build? It all depends on how seriously you react to the rules of its construction

Groundwater: the availability and suitability of

No antiquated methods will not give a definite answer to the question, do you have in your yard water and if it still exists, what is its quality. The exploration area is the only reliable source of such information. If permanent structures on the plot is already there, and the intelligence available. Otherwise, it remains only to meet with immediate neighbors whose wells are already in place. Ask them what is the depth of their mines, have water samples. Let the local SES will check the water quality.

Dowsers looking for water the methods used by our grandparents. But even successful in finding a source does not guarantee the water quality

To select locations for well

The choice of the location for a structure should also be approached with great responsibility. 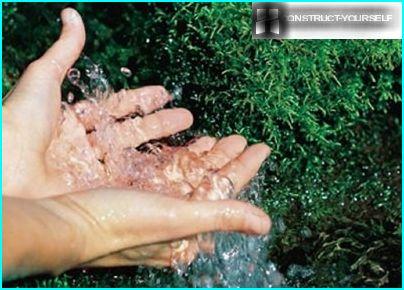 If the area polluted by waste or nearby is a major source of pollution, it is hoped to obtain from the well of pure water pointless

There is another limitation, according to which around the well in the 50-meter sanitary zone cannot be placed sewer drains, gutters or landfills. Otherwise, the extracted water will be unnecessary specificity. 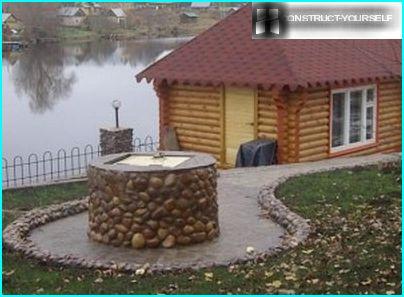 The well must not be closer than five feet from buildings. A large accumulation of water could affect the Foundation

The technology of digging wells

To learn how to dig a well, you first need to understand what equipment digging even exist. The professionals practicing outdoor and indoor method of digging wells. Because of the differences in these fundamental techniques, each of them deserves separate consideration.

Manual installation of bearing structures on the site with dense soil is done openly. 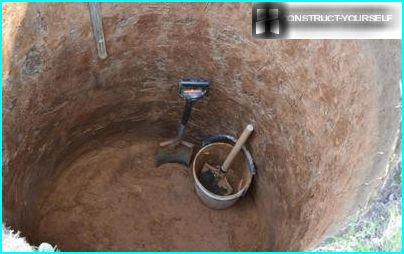 The walls of the mine will not collapse, if not leave it for a long time without rings. The smooth surface indicates the presence in the soil clay

Open technology of the digging of a well is composed of simple and clear steps:

It is obvious that the characteristics of the soil, which allowed for the entire time to keep the shape of the walls of the mine are crucial for the choice of the open method of digging. A video dedicated to the construction of the well, will help you to understand:

If the composition of the soil is granular (gravel or sand), to perform the work of the open method problematic. The walls of the mine are bound to shift, crumble, etc. the Work will have to interrupt the process drags on, will be prohibitively labor-intensive. Will have to dig a well closed method, the so-called differently «in the ring». 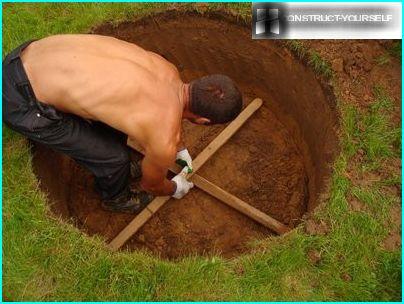 For a closed way of digging it is important to start work. The ring will have to slide along the walls of the mine under its own weight, so the size of the pit should be accurate

Schematically, the closed technology of digging wells can be represented in the following steps:

At the final stage are mounted all necessary for the functioning of well equipment. 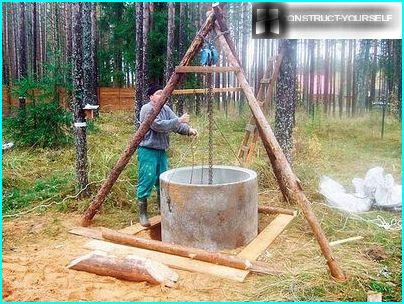 When working with rings, you should be careful. Manufacturers often indicate that the work must be performed with a winch or crane. Otherwise, claims for cracks and chips will not be accepted

The advantages and disadvantages of different methods of digging

The open method is attractive primarily for its simplicity. Dig is much better not surrounded by concrete. However, the advantages and disadvantages have each of the methods simultaneously. Often the excavation can be found the boulder. If it happened in open excavation, the mine is easy to expand, apkopoti obstacle and pull it to the surface, tying with ropes. Now imagine how much more difficult when the digger is in the closed space of the ring. The problem may be unsolvable. 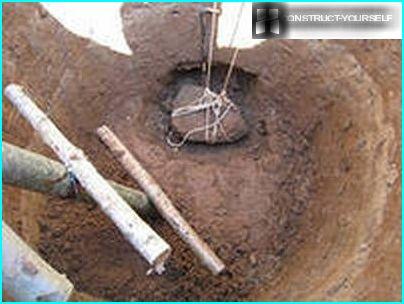 The boulder refers to the number of easily removable obstacles, if the excavation is conducted in an open way, but try to cope with it inside the concrete ring

Another trouble that can happen in the process is quicksand. The quicksand called the soil, saturated with water, which can spread. Being in an open mine, the excavator may attempt to stop the quicksand, made of grooved boards elementary caisson. Can later, filling with soil the space between the reinforced concrete structure and the shaft to completely isolate the quicksand.

Have closed sinking another drawback. It occurs when the mine appears «perched». It falls down together with adjustable rings, then blended with groundwater and spoils them. The contaminated well is useless. Moreover, it turns out that to get rid of in this case «perched» very problematic. You can dig another hole on the outer surface of the rings to reveal the source «perched». But to identify it and isolate even in this case, is not always possible. 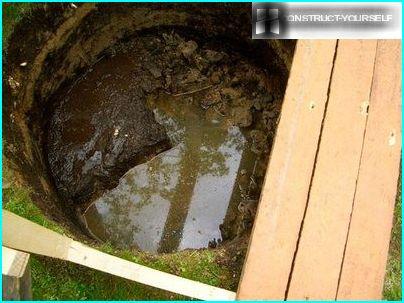 Here is the well water, if it seeps perched. To identify the source of trouble should, in fact, another well next to dig

It would seem that doubts disappeared, and we know how to dig a well at the cottage. Indeed, the value of the open method are obvious, and we now turn to its shortcomings.

With the open method of digging the mine you have to dig a larger diameter than constructed well. The natural solidity of the soil inevitably disrupted. Between the wall structure of the well and the mine we put the soil that differs in structure and density from being here initially. New soil can be deformed, and the rings offset relative to each other. Such shifts can cause destruction of the well. 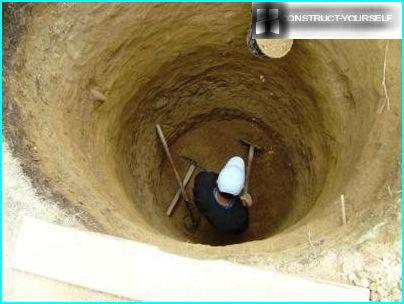 Open shaft in any case you cannot leave for a long time without rings. The dried walls begin to crumble with each new hour bringing a moment of collapse

In addition, when the open method significantly increases the volume of earthworks. And again, you have to acquire special equipment to install the concrete ring. Will need cable, hook, block, tripod and winch. The process of the lowering of the ring not only difficult, but dangerous. When using a crane to properly install and align the ring will be easier, but the attraction of such equipment is always expensive.

If inexperienced digger may have underestimated the degree of density of the soil, the walls of the mine may crumble, negating all efforts. If mine stood ready without rings more than three days, the likelihood of collapse increases significantly. Naturally, when digging «in the ring» this danger does not threaten. When the ring under its own weight sink into the shaft, the integrity of the soil remains virtually intact. For their installation no additional hardware, and the probability of injury is reduced.

A few words about safety

One digging a well is impossible. It’s not even that it is physically difficult. There is a danger of a different kind. The subsoil is rich in surprises. Along in water reserves, you can stumble upon an underground accumulation of gas. It could be fatal in a confined mine space. To identify invisible danger can be using a burning torch. Quickly extinguished the fire says invalid gassed. 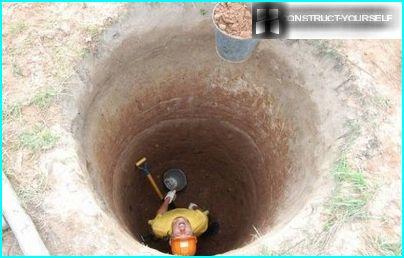 This digger would do well to listen to the briefing, before putting on the helmet. He clearly does not know what exactly he needs this remedy

Drop shipping on the head of the digger – another obvious danger. Whether in such a situation to talk about the relevance of the use of protective helmets?

That is why well-organized digging of wells implies not heroic work enthusiast, single, and properly planned the work of a group of like-minded people. For example, they organize the forced ventilation of the shaft, using for this purpose at least the fans and vacuum cleaners. Alternately to dig the mine and jointly set ring easier, and to celebrate the solemn handing over of object in exploitation much more fun with friends.