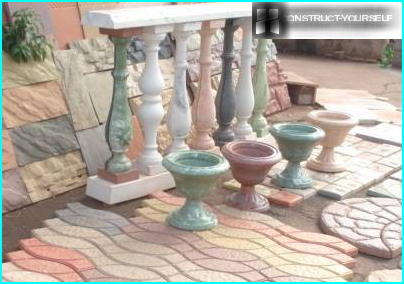 Garden paths are the guiding threads that connect into a single ensemble all functional areas of the plot and other elements of landscape design. No garden paths impossible to achieve artistic perfection of the appearance of the garden. The choice of configuration tracks, laid across the site, carried out at the stage of landscape design. Depending on the destination tracks are selected the materials for their devices as well as technology styling. In keeping with the landscape design of the classification tracks can be decorative and utilitarian, major and minor, hard and soft, straight and zig-zag, wide and narrow. The design of the road transport network of the site is subject to its topography, which can be smooth, «saucer-like» or multistage (in the presence of significant elevation changes).

Utilitarian and decorative paths in the garden

All garden paths can be divided into two groups: utilitarian and decorative. At each site there are always members of both groups. To the utilitarian group includes access roads to the sites for vehicles and tracks to farm buildings, which are actively operated for the entire year. Width of the entry paths to the site depends on the size of the vehicles used by the owners. Usually this value is 2.5-3 meters. Capacity of Foundation is calculated based on the weight of the transport. As materials for the fabric previously used only concrete. Now the preference is often given to a road tile that allows you to more accurately maintain the style in the design of the landscape.

Decorative garden paths necessary to decorate the area. They lead Hiking trips, during which one can enjoy the beauties of the garden. Decorative paths lead to Seating areas, hidden in secluded corners of the garden plot. The width of the tracks of this type ranges from half a meter to five feet. As materials for the device decorative tracks used pebbles, gravel, tile, natural stone, etc. 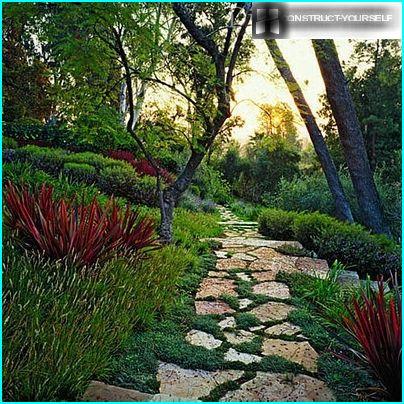 Decorative garden paths, lined with natural stones, bring flavor to the design of the garden landscape and make it easier to admiring its beauty

Among the garden paths, there is a kind of hierarchy. Tracks can be primary, secondary, connective. 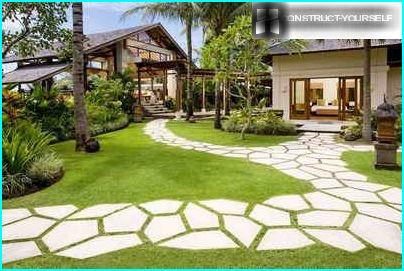 When designing the road transport network is required to adhere «gold» rules, namely that axis of all tracks should intersect at a single point. This place, which is the compositional center of the garden, is decorated in dominant style.

Construction of garden paths is selected depending on:

Due to the design features of the garden path in addition to principal purpose is able to perform another important function – water removal. To do this, give the surface a slight slope to provide drainage of rain and melt water in the drainage layer of the base paths. To build a garden path, you can:

If the value of the longitudinal gradient on any part of the garden path exceeds 70 ppm, it is recommended for security purposes to arrange the stairs. Otherwise, the path will be too steep. 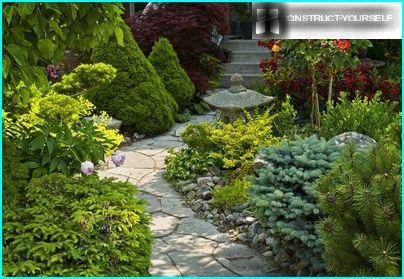 Classification of tracks according to the type of base

Any path is composed of the following structural elements:

Depending on the functional purpose of garden paths is chosen substrate type. So for garden paths, used during the summer season, enough to make a sand base. For pedestrian walkways, operated year-round, the base should be gravel and sand. The entrance roads and sites designated for Parking of vehicles, building on a strong concrete base, reinforced with reinforcement.

The roadway is also required as a constructive element of any track. In covering all the garden paths can be divided into two groups:

In landscape design are used as combined tracks, which consist of sections with a hard or soft cover. 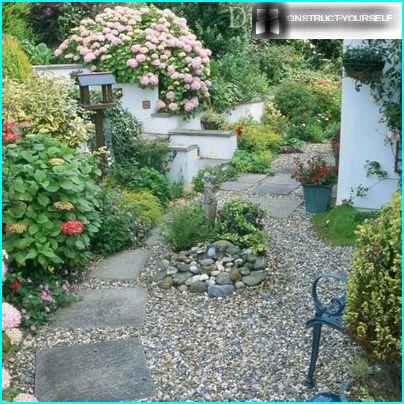 Combination tracks are made of bulk materials and hard coatings, is presented here in the form of individual slabs of stone of square shape

For stacking the special roadway used complex technology. These include the green track, arranged on the geogrid or decorative poured concrete. The most popular in residential construction are hard paths, allowing to implement a variety of stylistic solutions for designing a garden site. Moreover, they are more practical as long-lasting, reliable, easy to clean. Soft track, you will have longer to clear debris from and to repair more often, leveling the bulk material.

In a separate group, decided to allocate the wooden cover, made in the form of decks, walkways, boardwalks, sidewalks, paths from the saw cut of a tree. 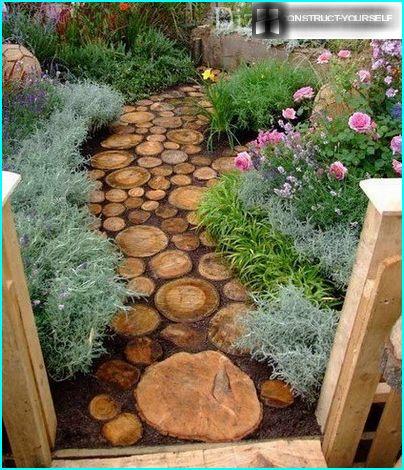 Strengthening the edges of garden paths

Curbs are used to enhance the edges of garden paths, allow you to:

The installation of curbs compulsory for garden paths with soft type cover. Hard tracks are framed by borders at the request of the owner of the suburban area.

The aesthetic value of the paving of garden paths

The choice of materials for paving garden paths has an important aesthetic value in the landscape design. The pattern of the road surface can set the direction for the movement of tourists, causing their interest in specific details. With the help of picture and the type of paving you can create the illusion of more space, which is important for plots with small area. Deliberate contraction or expansion of tracks, interspersed ornament, step-by-step sections, lined with decorative stone and a number of other tricks used by landscape designers, allow you to decorate the area and make it look unique. 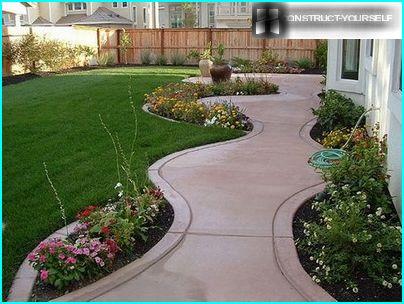 Fancy form garden paths adorns the garden, shading the green lawn and producing a small flower of a common background

The light relief device for track

Any track laid on a site with a practical or decorative purpose, must necessarily be safe and comfortable during operation. This is possible only if tracks are designed to suit the topography of area: 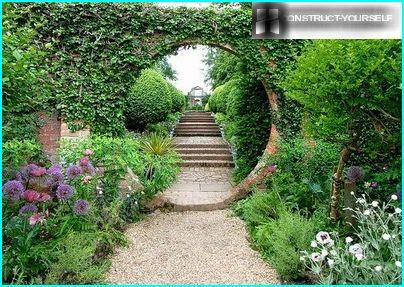 The main garden path, lush green trees and disappearing into the distance, allows you to climb to the terrace on the cascade stairs

The combination of materials – the key to perfection composition

Garden paths, combined with the shape and color of the materials used with design houses, fencing, arbors, flower bed, allow for a compositional perfection garden. When designing the tracks need to meet the requirements of the selected style. For example, in a simple, regular style assumes that all garden paths will be straight. The main track serves as a kind of axis of symmetry that divides the garden into two equal halves design. Pad, arranged at the intersections of the paths must also have the strict form of regular geometric shapes (circle, square). 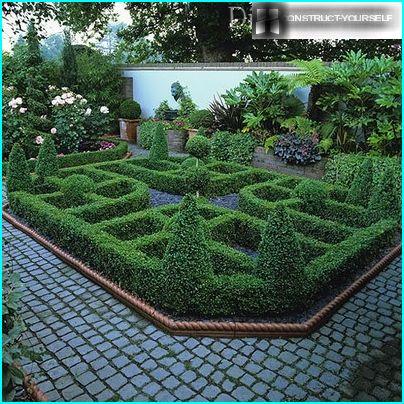 The garden in the regular style, smooth and straight paths, held as if on the line the skillful hands of the designer-artist

Landscape style, on the contrary, does not accept the strict and straight lines. In this garden would be appropriate winding paths leading into the hidden corners of the plot. With each bend of the meandering garden paths should open up beautiful views of trees and flowers, artfully designed ponds with streams and waterfalls, attractive recreational facilities, charming sculptures and other decorative items.

To obtain the unexpected result that allows the combination of styles. While mixing the main track is carried out in a straight line, and secondary paths that extend from it, give free-form. To enhance the beauty of Dutch design will help track floral border.