According to the international classification, these perennial bulbous flowering plants are divided into 9 groups:

In natural conditions, these herbaceous plants are widespread in temperate latitudes of the Northern hemisphere: the Mediterranean, the South-Eastern part of Central America, Japan, China. The greatest distribution in the middle latitudes received the Asiatic hybrids lilies. 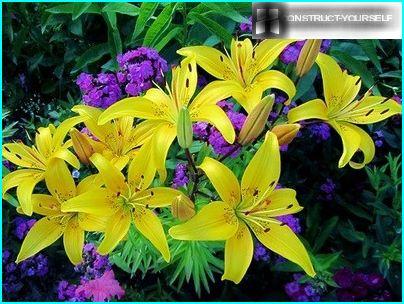 Lilies are among the most beautiful of the genus onion. They belong to the family of lilies and are relatives of onions, grouse, tulips 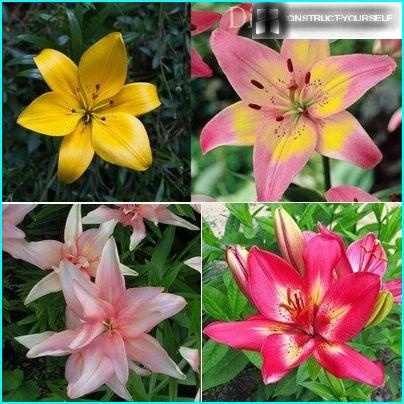 Asians come from natural species of Siberian lilies, such as the Daurian and tiger, and therefore most winter-hardy and adapted to the not so favourable climatic conditions. Other lilies, such as Oriental, tubular or curly, will require more attentive care.

Among the Asiatic species the largest decorative different varieties:

From old and time-tested varieties should be singled out: «Enchantment» with flowers of rich red-orange hue, «Destin» with gentle petals lemon yellow, «Paprika» with bright red flowers. 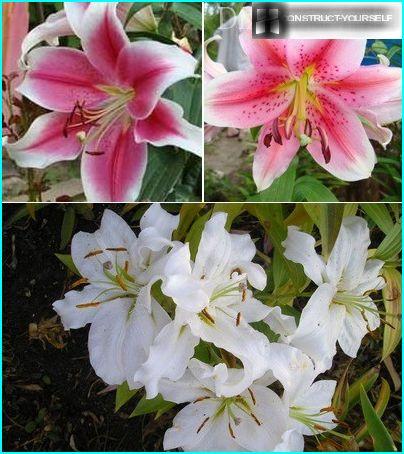 Worthy representatives of the group of Oriental can be considered: «Mona Liza» with delicate pale pink flowers, «Tiber» with flowers of purple hue, framed by a white border, white beauty «Siberia»

The choice of planting material

When selecting planting material, it is important to consider climatic features of the area, as not all lilies are able to safely endure the variations of temperature.

When purchasing planting material, carefully inspect the follicle: whether it spots and signs of rot. These signs testify to the defeat of plant diseases. Onion should be evenly colored, the scales densely adjoin to each other.

To determine the varietal identity of the plant will help marking:

Until the moment of planting the bulbs are best stored in a cool place, sprinkling sand, sawdust or damp moss. Some fit for these purposes the bottom shelf of the refrigerator. 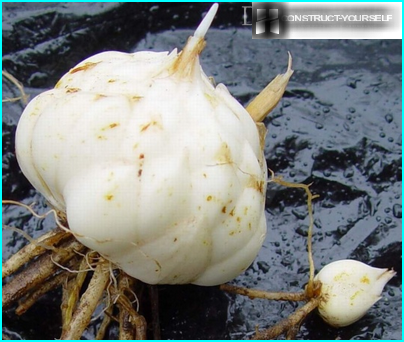 For spring planting, choose bulbs that already had sprouted shoots and started to increase her white roots

In the case when the onion ahead of time vengeance begins to sprout, it is desirable to plant in a flower pot, leaving in a warm room. In the open ground should be transplanted after frosts.

The choice of location for planting

When planning where to place exotic beauty in the area, should focus on her group membership. Tubular, Asian and Oriental line, the largest decorative show only in well-lit areas.

Feel comfortable in partial shade lilies, whose underground part of the stem are adventitious roots. These include a variety of group curly lilies. They should be placed so that the apical part was shaded, and the inflorescence was covered with sunlight. 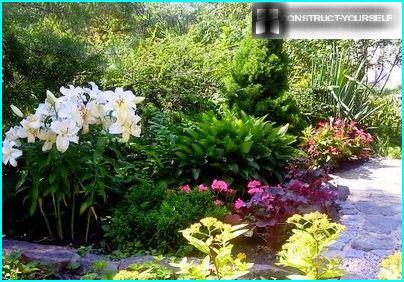 Lily with large flowers showy in solo performance. When planting small-flowered lilies for expressive aesthetic effect it is better to form a small group, placing them at a distance of 10-15 cm from each other. Against the backdrop of lush foliage of other perennials bright, delicate flowers stand, creating a gorgeous picture.

For planting flowers ideal plots located on a small hill. This allows to prevent stagnation of rain water, which often causes destruction of plant pathogens. Waterlogged soil is detrimental to the finicky beauties. To improve conditions on clay and loam soils by the arrangement of the drainage. To do this, lay the ditch, placing them at a slight angle. The bottom of the trenches lined with the layer of crushed brick or crushed fine, sprinkled on top of river sand and covering the ground.

To the soil in the root area of the flower was in the shade and not overheat in the sunlight, in close proximity it is best to plant daylilies, bluebells and hosts. Their spreading foliage will cover the earth’s surface, creating optimal conditions for the development of fastidious beauties.

The right soil is 80% of success in growing lilies. Regardless of group affiliation bulbs they prefer to grow in rich soil. 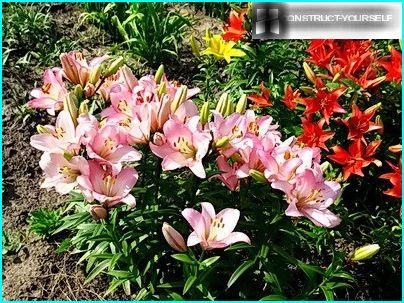 The best fertilizer for lilies are considered humus. But it is to make with caution: if surplus power plants begin «fatten». This provokes a slowdown of development, lower resistance to diseases and lowering of frost resistance. The optimal insertion ratio of humus is 7-8 kg per 1 sq. m.

Be detrimental to the plants can make poorly decomposed manure containing pathogenic microflora with pathogenic plants.

The soil beneath these flowering herbaceous plants should include sufficient nutrients, because in one place a plant can live from 3 to 5 years. When digging the soil it is charged with mineral fertilizers, which include nitrogen, potassium and phosphorus. Make them at the rate of 100 g per one meter square. 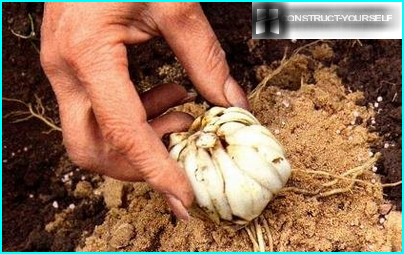 Since plant roots go quite deep, the soil before planting, dug, buried 30-40 cm For drainage of the heavy clay soil in its composition contribute sand

Most members of the family daylilies do not tolerate acidic soils, preferring slightly alkaline and slightly acidic soil compositions. On acidic well-drained soil feel only varieties of the Eastern group. Asiatics and LA hybrids are more like neutral and homoserine soil, and the tubular lilies, the largest decorative show in the poor alkaline soil with admixtures of ash and sand.

To reduce the acidity of the soil help:

The bulbs before planting, inspect, discarding diseased specimens: remove the damaged tissue, cut off the rotten scales and dead roots.

The examined material was washed under pressure for 20-30 minutes. Then, to prevent the development of fungal diseases, they were first incubated in a solution of potassium permanganate, prepared in a proportion of 5g per 10 liters of water and after the solution preparation fundazol. If necessary you can etch in the insecticidal solution on the basis of trichlorfon and one percent of fosfamida. 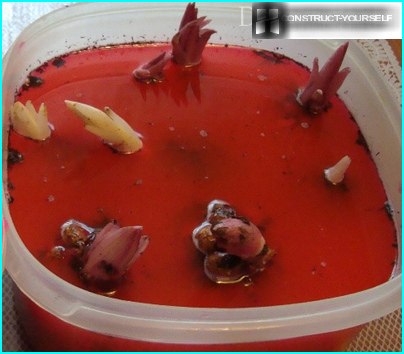 The root system of these plants dries fairly quickly. So to dry after soaking them is not necessary

Choose the time of planting

The optimum planting time – after flowering plants. This period from late summer to mid-autumn. In the case of purchase of bulbs in early spring, planting can take place as soon as the soil is thawed and dry. Late spring planting is risky because you can damage young shoots.

Spring planting is more suited for late-flowering varieties of bulbs which are slowly emerging. These include LO hybrids and varieties of the Eastern group: Rio Negro, white haven, Rialto, Marco Polo. 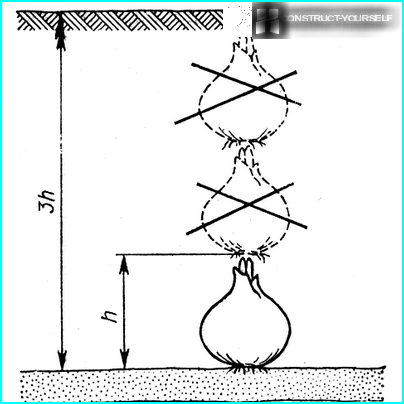 When transplanting plants should be guided by the rule that large bulbs with a diameter of 8-12 cm are planted at a depth of 25 cm, and shallow – at a depth three times the size of the follicles

The only exceptions are Hanadeka, White and Testaceum. Supersoil they form a rosette of leaves, but because the layer of soil over them should not exceed 2-3 cm.

Planting bulbs in heavy soil types, the bottom of planting holes littered the 5 cm layer of sand. To protect them from voles, on the inner walls of the planting hole, spread the wire mesh.

The onion spread on the bottom of the pit, setting it on a makeshift sand «pillow», and spread their roots. They cannot be twisted and bend upwards. The landing site is marked with a peg and sprinkle the ground lightly tamping. Hole Creamed abundantly watered with water and cover with a mulch of bark.

Lilies are very sensitive to drying roots. So the bulbs are not weathered until the hole is prepared, it is better to wrap in a wet cloth or hidden in a box of moist peat. Tender young shoots are afraid of differences of temperatures

To protect the young shoots, planted bulbs, cover the plastic bottles with the bottoms cut out. For this purpose it is better to use bottles with wide walls with a volume of 2-3 liters.

The subtleties in the care of exotic beauties

How to care for lilies? To minimize the care for these flowering plants, you should observe some recommendations:

Seated lilies, separating a subsidiary of the bulbs every three years, a month and a half after flowering. During this period they have increased weight and gaining the greatest effect. 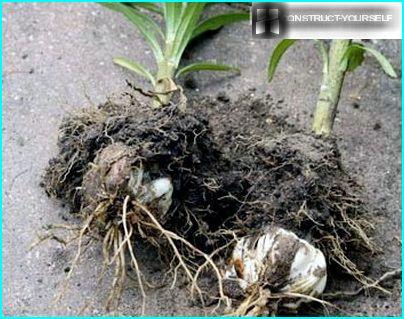 Seated lilies, separating a subsidiary of the bulbs every three years, a month and a half after flowering. During this period they have increased weight and gaining the greatest effect

Slow growing varieties of Caucasian descent it is better to plant out only after 5-6 years. Asian varieties can be transplanted even in the summer. The main thing – to dig up the plants with a garden fork along with a lump of earth, keeping the root system.

When transplanting bulbs-kids should be separated from the stalk and planted in nursery beds for growing. Immediately after planting, sprinkle them with compost or manure with humus, forming a layer thickness of 3-4 cm Of them will form a full bulb on the second or third year.

Day-Lily – a Lily for the lazy

No wonder the breeders of these hardy and disease resistant perennials called «lilies for the lazy». And the assertion that the prettier the flower, the capricious, this plant is not applicable. Day lilies grows well in any garden soil, comfortable feeling in the bright sun and in partial shade. 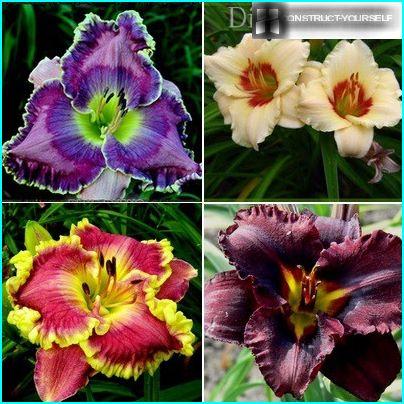 Not inferior in beauty to the garden lilies and their immediate «relatives» — daylilies, but unlike the finicky beauties they are very easy to care for

Planting and care of daylilies takes a little time and effort. And delight of flowering the plant begins in the first year of planting. These perennial plants prefer neutral or slightly acidic soil. Able to grow in depleted soils, but the most decorative show on the rich organic friable loam. They are tolerant of infrequent watering, but, like lilies, can not tolerate water stagnation. 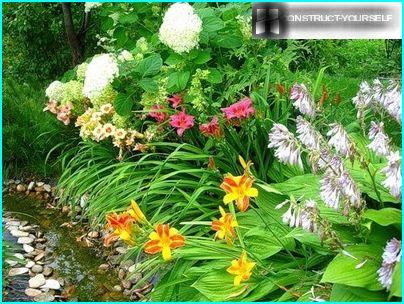 Daylilies can become a bright decoration of any flower garden. With proper selection of species, with different flowering period, flowering daylilies will not be difficult to stretch for the whole season.