September: the last feeding and preparation of planting holes

Starts caring for roses in September, with feeding of the bushes. Abundant flowering Bush robs a lot of nutrients, so you need to restore balance to strengthen root and branch. Feeding is carried out either ready-made solutions/granules, or buy separately phosphate and potash fertilizers. They stop the growth of roses, accelerate the lignification of the shoots and increase the resistance of the bushes to frost. 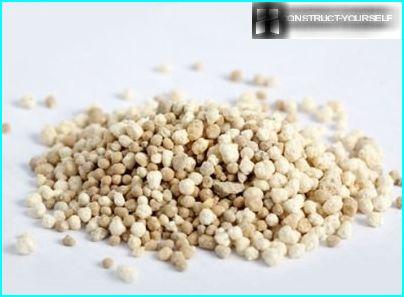 For autumn feeding of granular fertilizer is preferable, because they are not immediately absorbed, but gradually, thereby urging rose to the rapid maturation

In the fertilizer should be nitrogen, because it affects vegetation, increases the amount of green mass of plants, and in autumn it’s just not necessary. If to provoke feeding the regrowth of young shoots, it will only weakens the Bush and reduce the chance of a normal winter. And all the green branches still from the cold will die.

Lignifications of shoots promotes and nipping. A week later, after feeding all the tops of the branches should be cut off sector to remove the growing point.

In September continue to cut drying flowers and stop to loosening the soil and watering, thereby slowing the growth of new roots. The root system needs to Mature in order to successfully withstand the winter. Even if all shoots will freeze, one sleeping buds enough that Bush came to life again. But this requires powerful, healthy, Mature roots.

But in the middle of the month you can start preparing the land for planting young bushes. Rozvadov the rule: if you want to plant a rose in the spring and prepare the ground for her in the fall. Therefore, in September work closely on preparing the ground for future rosary.

How to prepare soil for future planting?

Having defined the place of the rosary, mark with pegs the location of each Bush. Note their size in adulthood, because the strong thickening will not allow the plants to develop normally. They will begin to infect each other fungal infections and are poorly ventilated. Besides, the lower part of the shrub will begin to turn yellow and the leaves fall. But planting too rare, too unprofitable. In this case, around the roses begin to spread weeds, and the earth overheats quickly. 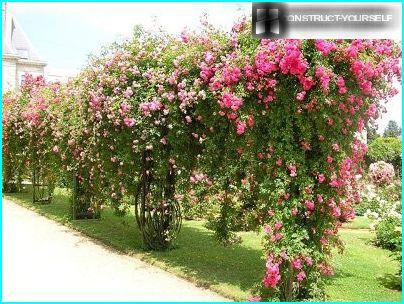 In the procurement of planting holes are guided by the size of the adult plant, because the height of climbing roses can reach three meters, and thickening of planting them will only hurt

Be guided by the following figures:

If roses are planned as part of the composition, it is necessary to allow space between them and other plants, to pruning and to cover winter without adversely affecting other colors. 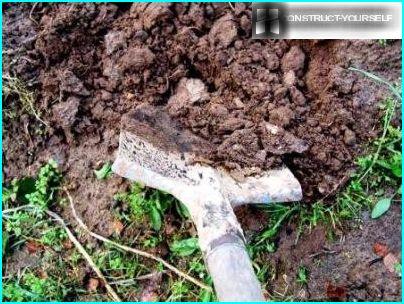 If the land is on the fertile land, use it in the composition of fertile soils, and if exhausted, move to another area

Select the depth of the planting hole:

Depending on the number of planting holes, prepare the desired volume of fertile soils, focusing on what each hive will take about 2 buckets of earth. The whole mixture is created in the following proportions (1 part – a 1 a bucket): 2 h fertile soil, part sand and part peat + part humus + 0.5 parts weathered clay + part sod land.

To this composition add mineral fertilizers: 2 cups bone meal 2 cups of ash + 2 cups of dolomite flour + 100 gr. complete fertilizer for roses. All components should be stirred, vysypat on tinplate sheet or film, and then scatter on landing pits.

Tip! If you can’t find bone meal in gardening stores, go to the Department of nutrition for animals. It can be sold as a top dressing to food.

In October, autumn care of roses comes to planting and transplanting of young plants, as well as cleaning the soil from the incoming leaves and other debris. Adult plants that are transplanted do not, cut off all the leaves so they didn’t take food from the roots. Bush it’s time to prepare for winter, and the gardener will facilitate this task by pruning the leaves and young branches.

Let us dwell on planting roses:

By the end of October climbing varieties removed from the trellis and gradually bends to the ground, while the branches are pliable.

When planting roses, the roots straightened to look down. So the root system is easier to adapt

Climbing roses require shelter, trying to lay on the ground before the frost until the branches are flexible and amenable to influence, and to press the weight

Completes care for garden roses in the fall in November. This month prepare the bushes for winter. And have time before the onset of stable cold create shelter, bring from the woods, twigs or buy used lutrasil. All the details and options of the cover for roses read article «How to cover roses in winter — the salvation «the Queen of flowers» frost».