Decorative and a variety of

Phlox drummondii was brought to Europe from Texas. Phlox is translated as «flame», drummondii – from the name of the English Explorer Henry Drummond, who had sent the first seeds of this plant from the USA to England, and thus opened to Europeans a new flower.

Most Phlox – perennials. But, unlike Drummond, they are tall, so use perennials in borders, perennial borders or rock gardens difficult. But their annual «brother» does not grow above two feet and a large number of varieties about 30 cm flower Diameter 2 cm, but it doesn’t seem small because the flowers are collected in corymbose or umbellate inflorescences, giving a beautiful shape to the Bush. Blossoms long, from June until late autumn. 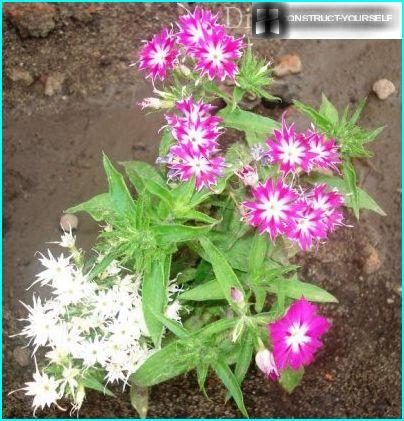 Form of flowers of annual Phlox Drummond of much more spectacular and diverse than paniculate years «fellow», for his love gardeners

Varieties of Phlox Drummond differ in the shape of a flower, each petal and color of the plants. The most popular:

Colors of Phlox Drummond is huge: from pure white to blue-purple. Most commonly found salmon and pastel varieties. 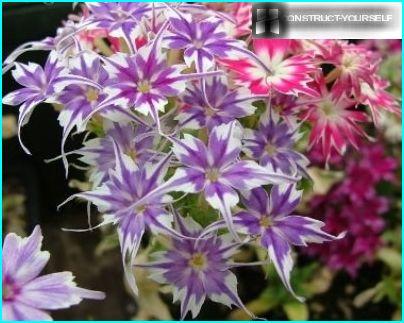 Varieties Tetra Riesen — tetraploid set of chromosomes (doubled), which plant has a big flower and high survival in all conditions

To flowering Phlox lasted as long as possible and was abundant, he needed to choose the right place in the garden. Annual Phlox is well tolerated heat and drought, so it can be planted in open areas where there are no shadows. Successfully the plant stand and the first frost. Frost spoils the petals of flowers and the remaining aerial part remains green. When temperature increase, flowering will continue until the consistently low night temperatures.

But there are two factors that harm the development of the Drummond Phlox. It’s heavy and too light sandy soil. First accumulate a lot of moisture, causing the root system of annual affected all sorts of rot. If the earth is too lightweight, not able to retain moisture in the hot summer it overheats, which also adversely affects the roots of the Phlox. Therefore, when preparing the flower garden it is necessary to adjust the composition of the soil, making the corresponding components (peat, compost, humus, etc.). 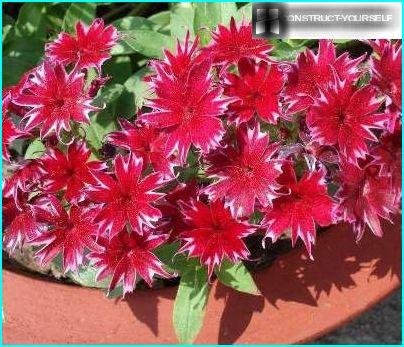 The plant is able to bloom continuously from early June to Oct, if his time to feed and to remove flowers after they fade

Phlox can be planted in two ways: by seeds in the soil or seedlings grown on the windowsill. The first option saves vacationers from the hassle to care for seedlings, but growing seedlings at home accelerate the timing of flowering. In June the young plants begin to bloom.

If you do not have the ability or time to breed Phlox on the windowsill, sow its seeds directly in the ground.

Early may is the best period for sowing. Make shallow furrows, pour them and wait until the moisture is absorbed. Seeds of the Phlox spread 2-3 pieces at one point, leaving between planting distance 15 cm If the socket all 3 germinate the seed is a weak peck.

Until inputs (and it lasts about two weeks) the planting is necessary to cover lutrasilom or spunbond below in the soil held moisture. As soon as the sprouts have appeared – loosen the soil, remove the excess seedlings and make liquid nitrogen fertilizer. After a week fertilizing with nitrogen is repeated.

When it begins to form flower buds – to make complex fertilizers (2-3 times per season). The first flowers of the Drummond will appear in July. 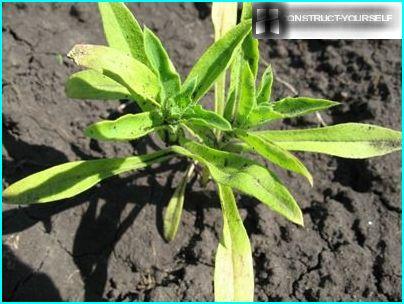 Once in the center of the Phlox begin to form flower buds — feed the plant complex fertilizer, to add the forces of the lush flowering

In addition to spring planting, you can plant Phlox for the winter, as the seeds have good resistance to frost. But there is one caveat – during prolonged thaws, the seeds can start to rise, and then get corrupted by the returning cold. To avoid this from happening, autumn sowing is carried out only once fell from a cherry tree last leaf (this is the sign!). If accidentally will return zero temperature as a bed is available non-woven material in order that he melts under the rays of the sun. As soon as the weather will again be cold, the shelter is removed.

If your location is winter – it is best to sow Phlox in late December and January. For this fall in the utility room leave half a bucket of topsoil. In December waiting for heavy snowfall to the ground completely hid under the snow. A good trample down the rows, which will sow the plants, and poke 3-4 seeds in one nest.

Sprinkle the seeds with dry soil, and top with a shovel, throw a layer of snow (at least 20 cm). Under this snow blanket Phlox asleep until spring and begin to emerge around April. 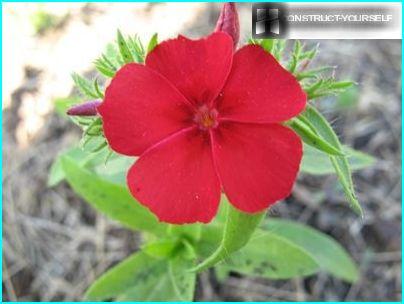 When planting seeds directly into the ground the first flowers of Phlox will bloom by the end of may, and in cold areas — after 10 June

The cultivation of seedlings

To enjoy flowering shrubs in late may – will have to Tinker with seedlings:

Flowering at planting of seedlings begins in late may. If you’re in time to remove faded blossoms and conduct regular comprehensive fertilizing, the breaks between waves of flowering will be. For good ventilation of the roots, the loosening is carried out at least 1 time per week. 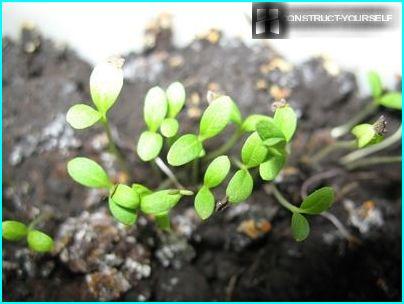 Do not expose the just-hatched seedlings on the windowsill, otherwise the bright sun can burn young leaves and slow down the development of Phlox 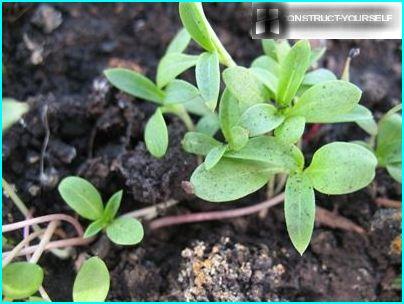 The appearance of two true leaves — the signal that must raspikirovat the Phlox in separate pots for seedlings, filled with nutritious soil 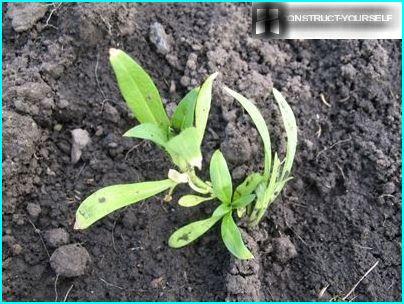 How to get your own seeds?

If you mastered the basics of planting and caring for the Phlox Drummond bought in stores can fall to stock their own seed.

What plants are suitable for reproduction?

The first thing you notice in some way at the time of flowering of each variety. Can be pasted on the stem self-adhesive labels, which are sold in commercials, writing on each a number of varieties (and in a separate notebook indicating what variety of Phlox is what number). Some gardeners attach to the stems of ribbons or threads of different colors.

Well, if, at the time of the landing of store-bought seeds, you pay attention to the packing information. Plants marked F1 for the future harvest of the seed are not suitable, as it is a hybrid. Of them will never grow Phlox similar to the variety from which you gathered them. But as experiment it is possible to plant hybrids with the collected seeds somewhere in an inconspicuous area. It happens that grow flowers of unusual color or shape of petals that do not retain signs of class, but in themselves quite spectacular. 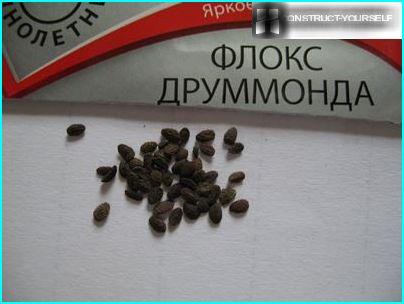 To obtain high-quality seed material in the home of F1 hybrids or tetraploid varieties is virtually impossible, as the seeds do not retain signs «parent»

Packets not marked as F1 plant separately, so it is with these plants and then collect seeds. During flowering palmette the most lush and good flowering Phlox. They make good seed.

At the Drummond Phlox seeds ripen almost all at the same time, so after shedding petals, you can cut the plant at the root, and lay on the ripening in a warm place (23-25 C) without direct sunlight.

To collect seeds it is better to choose a dry Sunny day. Cut the Phlox this afternoon to completely dry on the petals of morning dew.

Prepared flowers laid out on sheets of newspaper, each variety separately, and leave to dry. As a rule, green weight and dries completely in 3 weeks. To drying was uniform, it is necessary to periodically stir the flowers. A signal that Phlox is completely dry, is the dry stalk that breaks easily in the hands.

After all above steps, the cleaned seeds are scattered on the paper or fabric bags, signing, the strain, and hiding in a dry, dark place for storage.

Tips and tricks from experienced gardeners

Experienced gardeners know that flowering can be extended by almost a month, if you use the following tricks:

The brightness of color and the original shape of the flowers of Phlox Drummond is not inferior to such recognized beauties annuals like petunias, Salvia, asters. Just one packet of seeds will transform a bed unrecognizable!