Plants of this genus can grow as a small (to 15 cm) and tall (to 2.5 m). The branches of shrubs erect or prostrate. Color ranges from light to dark brown. Roots are shallow, fibrous. During flowering spirea is covered with numerous small flowers in inflorescences of various forms. Color of petals – from snow white to crimson. Inflorescence of spirea can be placed around the run and on the upper part or at the end of a branch. The plant is propagated by seeds, cuttings, dividing the Bush, layering.

Spirea does not require pruning. It is carried out solely for decorative purposes, to give the bushes a more aesthetic appearance. The crown of the plant can be thick and dense or slightly «sparse», but always attractive. Branches bloom to the ground, so there’s no unsightly effect «bare legs».

The shrub is hardy, adapts well to different climatic conditions, therefore it can be grown not only in the South or in the middle lane, but in the Northern regions. If in severe frosts Spiraea freezes, then after cropping it is fully restored and blooms in the same year. For the normal development of plants just a few hours a day of direct sun, and feeding, good soil. In the winter it is possible not to hide

Spirea blooms on the shoots that grow during that year, so the crop does not spoil its appearance

Varieties of shrubs of the genus Spiraea

All plants of the genus Spiraea can be divided into two groups: spring – and Letnitsa. Flowering profusely the first but short-lived. The second group of shrubs bloom at different times, for two months. The flowers have more saturated colors. Low-growing varieties are often used for Alpine design.

Spring flowering varieties are covered with flowers in mid-may. Their peculiarity lies in the fact that they are all white. Shades can be different but the color is white. Plants will begin to flower in the second year of life, much bushes. The most popular are these types of bushes:

Spirea gray. The plant got its name not from the colour of petals (white, like all spring flowering species), but because of the gray-green color of the leaves. This is the most common type of spirea. Flowering period – may to mid-June. Inflorescences are found along the length of the shoot.

Attention gardeners uses Spiraea grey «Gresham». The plant reaches 1.5-2 m, has a spreading crown and a boil-and-white flowers with a diameter of 1 cm, collected in inflorescence-umbrellas. 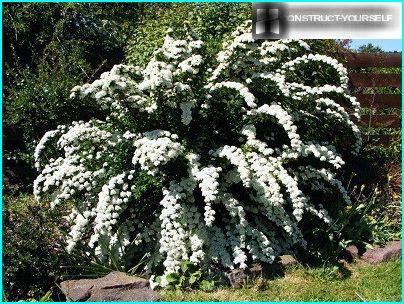 Spiraea Vanhoutte. This hybrid of Cantonese and three-lobed spirea reaches 2 m. Flowers small, up to 0.6 cm, collected in hemispherical inflorescences. Dark green above, and dull glaucous below the leaves in autumn turn a reddish hue. This variety can bloom twice – in the beginning of June and in August.

Spiraea arguta. The plants reach 1.5-2 m, have a beautiful shape. During flowering (late may to mid-June), spirea arguta is similar to white fragrant waterfall.

They have inflorescences appear at the tips of young shoots. While last year’s branches die. Letnitsa species are represented by varieties of Japanese spirea, willow leaf, Bumalda and others. Flowers can be pink or red coloring.

To start tell about the English. The bushes she reach 1-1,5 m in height. The leaves are green on top and dull grey underneath, oblong, ovate; in autumn the leaves turn yellow or red. The flowers are pink-red, are collected in paniculate-corymbose inflorescence. The plant blooms for up to 45 days. Common varieties:

English is one of the most common but not the only laterbecause look. Popular are also:

Even before the final choice of shrub planting should define the desired size and type of plants. Varieties differ in size: they can be compact and fit in a small area, and can grow upwards and outwards. So for solitary planting, clearance of hedges and rockeries choose different types of plants. 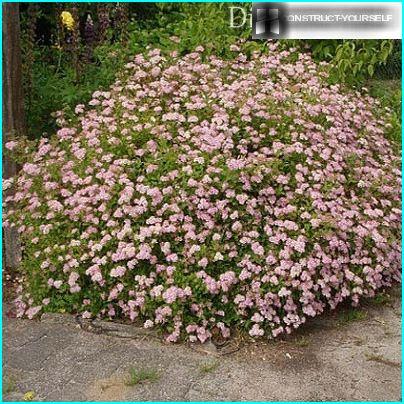 Spiraea «Little princesses» looks great in combination with other varieties of spirea, pine, lavender. This type is suitable for decoration of flower beds, rock gardens, space around ponds 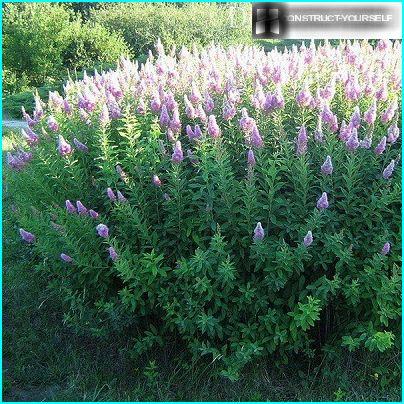 English Billard frost resistant and shade tolerant, but it is better to put it in well-lit areas

For hedges, you should choose varieties that give little fruit stalks and respond well to pruning. The Alpine slide you can decorate with slow-growing varieties. But for a single landing is better to choose plants with well-developed basal shoots, which occupies a large area. For rockeries and rock gardens using dwarf varieties. By choosing several varieties that bloom at different times, the gardener can achieve flowering spirea in the spring until the autumn frosts.

Peculiarities of propagation of spirea

The shrub is propagated as generative (seeds) and vegetative (cuttings, layering, division of the Bush). The first method is time-consuming. It is used mainly breeders when working on breeding new varieties. During the multiplication of seeds and planting material harvested in the fall and sown in a special tray with the soil and germinated under a perforated film. Planting sprouts in the open ground can be produced in the spring. The soil should be well fertilized. 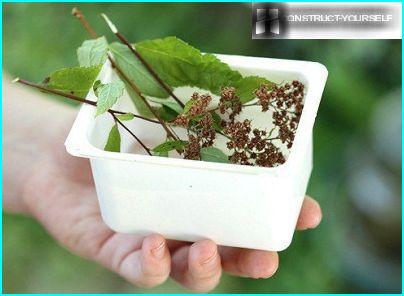 Generative reproduction is recommended for Spiro the first group. Hybrid varieties do not give full seed. To test the germination of seeds, do a trial planting

Vegetative reproduction can be of three types.

For him, choose stems with a length of 10-15 cm without flowers, treated with a fungicidal solution, and then they are ready for planting in the ground. It is best to plant Spiraea indoors. The soil is moistened, sprayed water, so the humidity was about 85%, and cover the handle with foil.

Wrap pre-cooked – pierce the holes for admission of air. Place it in the 30-40 cm from the planted cuttings.

The easiest and most effective method. The percentage of survival of seedlings obtained through cuttings, is very high. The branches of the spirea bend over, pin it to the ground and covered with soil. Quite quickly the branch are rooted, after which they can be cut from the Bush and transplanted ready-made seedling.

Option #3 — division of the Bush

This manipulation is usually carried out in autumn or spring. If you need to split the hive in the spring, you should choose the period before the first buds. Spring breeding Spiraea has both significant advantages and disadvantages.

The advantage is the rapid inclusion of plants in growth, the disadvantage is the increased risk of infection of the root system due to the warm weather. To solve this problem, seedlings are soaked in a fungicidal solution.

The spirea should be planted in slightly acidic, preferably pH-neutral soils. The soil should be rich in nutrients, with normal aeration. In the spring, the spirea is best grown in the fall, and laterbecame well acclimatized and in spring and in autumn. Many growers are of the opinion that the best month for planting varieties Letnitsa – September. Great neighbors for spirea can be conifers – spruce, juniper, arborvitae. 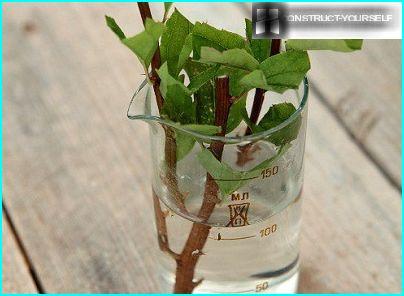 Each variety of the spirea has individual characteristics, but there are all kinds of rules of planting. If they stick with it, the plant will continue to heal and in the future will develop normally. The recommendations of the experienced growers:

The hole for the spirea needs to be a third more than the root system of the plant. Her digging for 2-4 days and allow to stand for. Then equip the drain, lower the plant into the hole, throwing the ground and compacted. If the English are propagated by dividing the Bush, the plant is extracted from the ground, placed in water to separate the soil, and then cut it with shears into pieces, each of which must have a good root lobe and a couple of shoots. 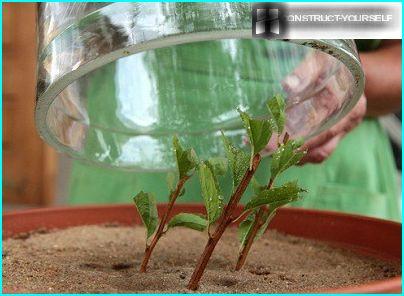 To keep the shrub attractive look, it is cut and form a crown. Very nice bushes, spherical and pyramidal forms. Specific «haircut» owner chooses, focusing on the overall style of the site. Cropping does not affect the growth of plants. Delete weak and older (7-14 years) branch. They are cut to a stump. Haircut crown better to do in the spring until the leaves come. If pruned in mid-summer, the spirea can re-bloom to autumn.

After trimming the soil watered with manure diluted in water. The mixture should be poured at the roots. You can and fertilize with a solution of superphosphate. Proportions: 8-10 g of the fertiliser per 10 liters of water. Also suitable «Kemira Universal». 1 sq. m. make 100 g of granulated media. Spiraea does not need intensive irrigation, is sufficient to sustain the plant during periods of drought. 1-2 buckets of water is enough for normal functioning of the Bush. In winter, the roots can be covered with 10-15 cm layer of foliage. 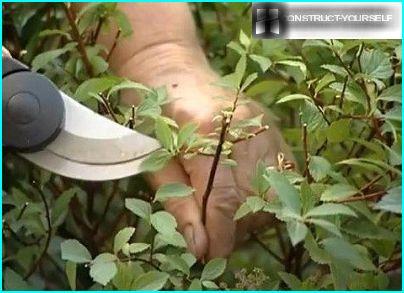 Spiraea can do without pruning, but it is better to cut it regularly to achieve a beautiful appearance and good health of plants

Spiraea susceptible to fungal diseases – askohitozom, ramularia, Septoria blotch. To determine their stains. Plant recommend to spray with Bordeaux mixture, «Fundazol» or sulfur colloid. The main thing is to handle the bushes prior to or after flowering.

Of the most unpleasant pests can be spider mites and aphids. Signs «work» the tick – the appearance of holes on the leaves, they are wilting and falling off the cobwebs. To cope with pests using the spraying phosphamidon or Malathion. The presence of aphids can be identified by the severed and withered inflorescences. To combat aphids, use pirimor or similar means.

The English may attack snails. How to cope with them, you can see from the video, which describes the peculiarities of pruning and plant care.