Varieties of roses for cold climates

Siberian climate, as it is known, is characterized by a late spring, short summer and harsh winters. To withstand such conditions, plants should initially be zoned in the local climate. I.e. according to the degree of survival of lead in plants grown in the Siberian catteries. The second place to give canadian growers the roses, because the climate of this country is similar to Siberian. But the real canadian roses, unfortunately, are rare. This category of plants are very attractive to buyers, so it is often counterfeited. Canadian varieties is better to buy only from a reputable supplier, and, of course, not with the hands or on the market.

The second selection criterion – inoculation. According to statistics grafted varieties of roses in Siberia is much easier to tolerate winter and not freeze because they have higher immunity. Rootstock for the variety of rose is usually a rose, and his immune system is much stronger than its own roots rose.

Here is, in the opinion of gardeners of Siberia, the five most undemanding and winter hardy varieties of roses:

Belongs to the group of Climber, i.e. large-flowered climbing roses. Can be grown as a trunk. Blooms dark pink with a gradual fading petals. Flower size can reach 12 cm, but the colder the climate is, the finer will be the flowers. The estimated size of the flowers to Novosibirsk – 5-6 cm Rosarium Uetersen love for resistance to fungal infections, repeated flowering (first – the most abundant, and after – waves). Powerful stems are not afraid of cold weather, no wind. Gardeners can kill this rose, except that, if improperly storing it for the winter, when the stems break from the poorly selected stacking direction. Bush vymachivanie up to 3 meters. 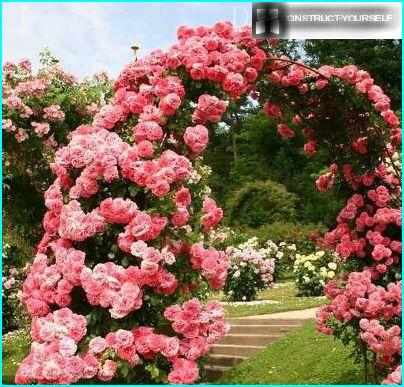 Rosarium Uetersen fit perfectly in the arch, pergola or other support structure, and if desired, it can be grown as a trunk

The German variety, is adored in Siberia for continuous bloom. This rose wakes up and blooms very early, and after almost does not remain without flowers. Flowers change color from bright orange to apricot-salmon. Diameter – 10 cm Has a certificate of ADR as one of the most undemanding roses. 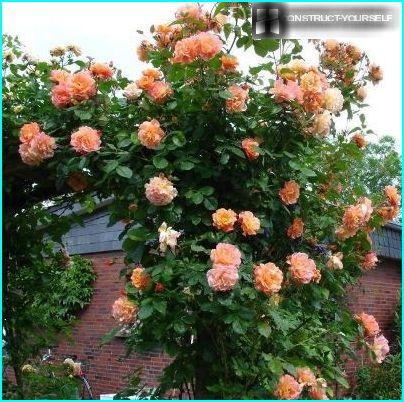 A descendant of American roses. Blooms pale pink, fragrant flowers almost the entire season. Her gardeners of Siberia was given the nickname «Very», ie, very hardy, very unpretentious (grows everywhere), very spiky, very aromatic, etc. the Only caveat: the last time there were instances of the New Dawn, which bloom only once. Therefore, before you order please check the number of blossoms, otherwise you can see this beauty only once, in early summer. 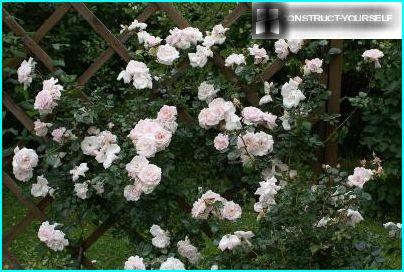 Siberians believe that new Down lives under the motto «All will be gone, and I’ll stay», because to survive in the most inhumane conditions

AndEnglish rose a new generation, nurtured a world-renowned breeder David Austin. Blooms velvety, deep red flowers, gradually turning into a purple hue. Fragrant, medium height (110 cm), each branch forms many flowering racemes. When purchasing, pay attention to the numbers in 2000, as exists and is the ancestor of the roses — William Sheakespeare, which is not so high immunity to fungal infections. 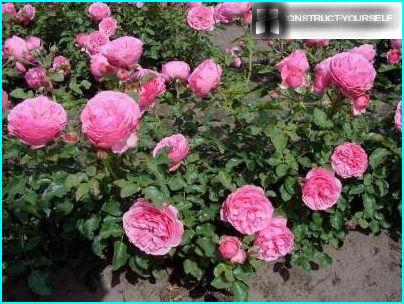 William Shakespeare 2000 is the result of selection of the eponymous English «ancestor», which has a high immunity to diseases and great resistance to frost

Another pet David Austin. Double blooms, bright yellow large flowers, similar to the beads, exudes a lemon-caramel aroma. In cold climates, grows up to five feet tall. Are not exposed to diseases, in addition to black spots. Looks great in mixed borders. 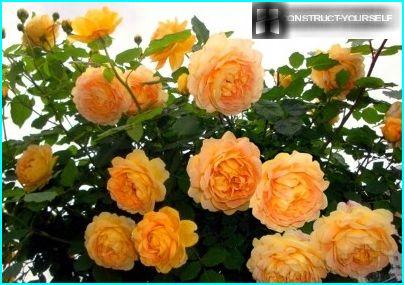 Sunny, large flowerheads Golden celebration smell like lemon candy, so they are planted in close proximity to places to enjoy the marvelous aroma

The selection of the location: looking for the Sunny side

Due to the fact that in Siberia the spring comes late and Sunny days in a year is not very much, rose tried to land on the South side. But a completely open area is not very beneficial, because the flowering period is considerably accelerated, and the flowers fade in the heat. It is best to think of light partial shade with realistic shrubs or trees. Roses planted near them so that in the hottest time of the day they were protected by foliage «neighbors».

It is desirable to select for rosary high places of the site. There is a degree of freezing of the soil is always smaller, and hence the roots Wake up faster. This will save the plant from high humidity, which is characteristic of the lowlands. Too much moisture causes the development of rot and fungal infections.

In Siberia there are frequent strong winds, and cold front coming from the North and from the West. With these directions (North, North-West and North-East) roses need protection in the form of buildings, pavilions, live coniferous hedges, etc. But the wall should be at such a distance that does not cast a shadow on the bushes.

For the Siberian climate desirable spring planting, and the time is much shorter than in other areas. Planting season starts in may when the soil warms up to 10 degrees. Growers determine the optimum time for dandelions as soon as they have flowered – time to plant rose bushes. Grafted seedlings are planted first, because the rose is not afraid of sudden late frosts. Own-rooted roses – not before may 15. The maximum period of planting – 15 June. If you’re late, rose will not have time to get stronger over the short summer and go into winter without a woody stem. So, it is easy to freeze.

Siberian planting roses is not much different from other areas. Prickly beauties like slightly acidic soil with a high humus content. The basis of the soil can be loam. Well when landing to lay on the bottom of the pit and covered with earth rotted horse manure, which will warm the roots. Directly in the manure bushes are not planted, so as not to burn young roots.

The optimal composition of the earth: 1 part of clay + 1 part sand + 3 parts compost + 2 parts peat + 0.5 parts of wood ash. Well, if you just make a special fertilizer for roses.

Many gardeners in Siberia found that tea, English varieties, floribunda survive better in the cold, if the vaccination site is not in the 5 cm below soil level, and 7-8 cm, i.e. a little deeper. Accordingly, for climbing roses need 12-15 cm Such planting can be weaker to cover, and some owners even refused shelter, buying varieties with high resistance to frost. 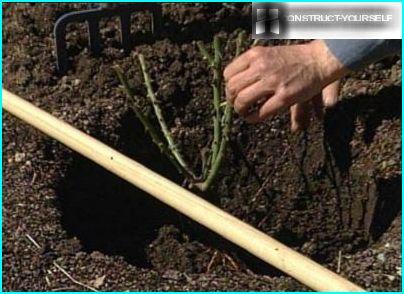 Be recessed landing rose can produce roots above the site of inoculation, developing its own root system, which is weaker than the hips, so «wrong» the roots need to remove

When planting the roots of the roses are straightened so that they were only from the top down instead of wrapped ring. To assist in this location could landing hill: at the bottom of the pit pour hill fertile soil, put it on the top of the seedling is straightened along the jut of roots and sprinkle. When planting mound watered after the rose is planted. A normal landing – you can first shed the roots, and then backfilled with soil.

After landing certainly Spud Bush to a height of 15 cm It must be that the water quickly evaporated. The land also protects delicate twigs from the scorching sun, because at the time of engraftment, they are very dry quickly. In the most Northern areas of planting shelter lutrasilom to protect against night frost.

Siberian ways of hiding these roses

To the cultivation of roses in Siberia, not ended by freezing the bushes in the first winter, gardeners have come up with many different options for shelter. Their similarity is that for roses in cold climates need to create a dry shelter, that is to protect each seedling from top with waterproof material. It will protect the plant from moisture, which instantly turns to ice.

That’s about how it all looks: 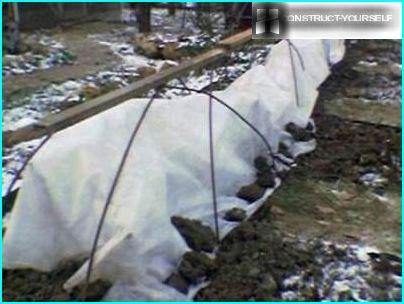 It is impossible to cover roses only lutrasilom without the use of film, because during the thaw inside moisture accumulates, and when the first frost she will settle the ice on the plants 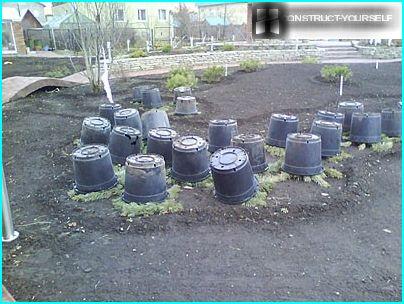 In any type of shelter in the early spring many Siberians repeatedly spraying water on the soil Appin to revive their Pets. Grateful roses give the hosts an abundant and fragrant bloom, although the nature of them have allocated very little time.