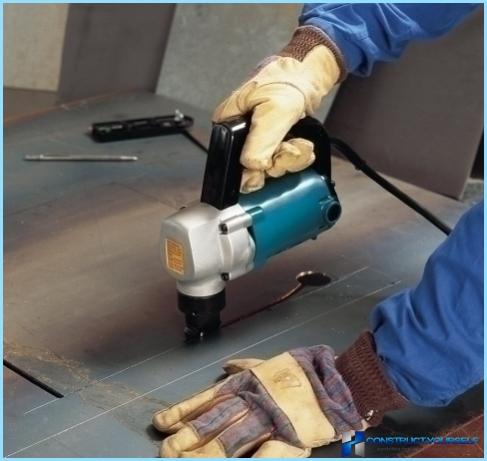 The process of cutting metal by hand is quite time-consuming and sometimes takes a long time. When performing large volume of work, need to buy electric scissors as hand tools will be difficult to do. Electric scissors have several advantages in comparison with the similar hand tools:

How to choose electric metal shears? The main factor that influences the choice of a particular model of scissors is the nature and specificity of work performed. Then you should pay attention to the kind of scissors their specifications and features. Device electric scissors video:

The entire modern range of electric scissors is of three kinds:

Electric sheet shears consist of two of the blades, one in the process of moving and the other remains stationary. Static (moving) blade is fixed on a support and a rigid sole having the shape of a horseshoe. The process of cutting is similar to cutting hand tool, difference – electric drive.

Cutting electric scissors are cutting metal with a static base and inside of the movable punch resembles a hole punch (for work). During operation, the punch cuts the metal surfaces are in the form of chips fall down, contaminating the clothes of the master. This fact many workers are annoying.

Slotted electric scissors are cutting metal with two knives, one of which has the form of U-shaped and fixed. In static is the second knife moving knife is performing the cutting of metal. In the process, the chip is removed using the built-in wire cutter. 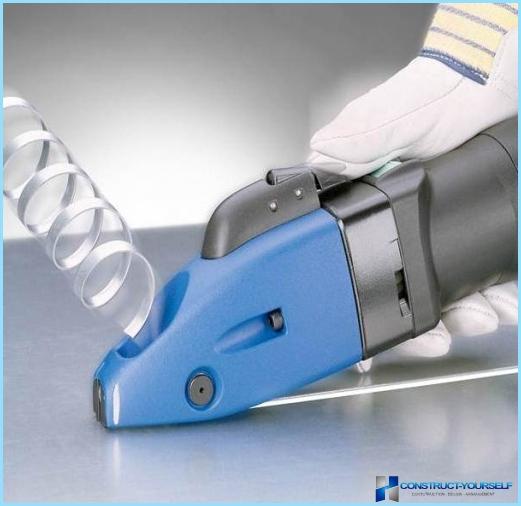 Specifications and features of electric clippers ↑

What are electric scissors to choose from a huge range of these goods? After examining the types of electric clippers, you should be familiar with the specifications and features of this tool are:

After examining the features and characteristics of all types, their technical parameters, you can select the electric metal shears. By purchasing this tool, it is necessary to consider the nature and volume of work performed, as well as the experience and personal preference of the wizard.