To date, a bidet can be considered almost a mandatory attribute of the house, because it allows to always maintain the cleanliness of the body. Unfortunately, not all people have the option to install it, especially if the bathroom does not have big sizes. In such cases, it helps the toilet combined with a bidet, which takes up very little space, but performs all the necessary functions.

The design of the toilet-bidet includes simple toilet, complemented by a hygienic shower (part of the bowl). It can be a pull-out spout with spray nozzle or embedded in the side of the toilet nozzle.

When you install a toilet with bidet functions it’s mounted due to the stable metal bracket to the holes in the bowl that originally foreseen by its construction. On the edge of this bar is fixed the mixer and hand shower of small size, which are connected with waterproof hose. 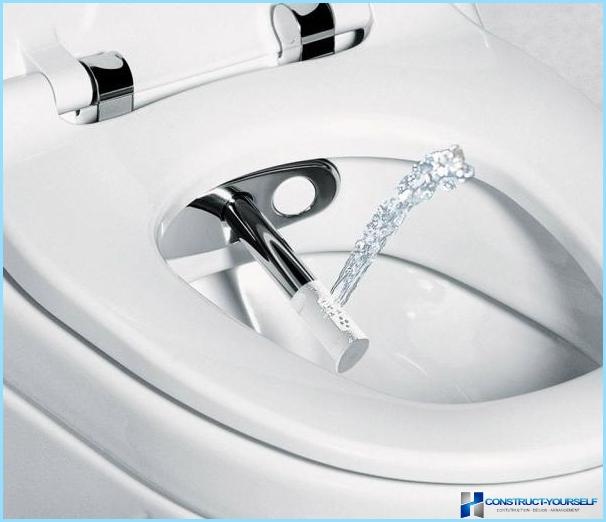 The advantages of toilets with bidet ↑

They have a large number of advantages, among which are:

How to choose a toilet with bidet functions? ↑

To choose the most suitable toilet, you should focus on a few important points. First and foremost, you should pay attention to is the availability of guarantees from the manufacturer. Otherwise there is a risk to buy a defective product or a fake. The second item will be the selection of this model, which will be combined with the bathroom and the size and design. Well, in the end, you should choose a suitable material from which made the toilet.

In most cases, toilets including bidet, made of porcelain, earthenware, glass, cast iron, steel and plastic. The most popular materials for many years are porcelain and faience. Their cost is higher than comparable models of other materials, but it is much higher. For example, such types of toilets are characterized by high strength and good resistance to dirt. In addition, they do not retain odors.

Choosing a suitable toilet, you should pay attention to the available wastewater system. Best proven those designs which have provided a horizontal shelf (serving as a barrier to splashes of water). One of the most popular types are the toilets in which the bowl is made in a funnel shape.

The arrangement of the system of flushing toilets with bidet functions are divided into vertical, horizontal and slant (the angle of descent is 45 degrees). The cistern can be integrated or can be separate (separate is considered more convenient since it can be placed on the wall at any height).

Also, the toilets are divided into hanging and floor. Due to its design, suspension facilitate the process of cleaning and does not occupy much space, for what are considered the most comfortable design.

It is important! It argued that the suspension models are not too reliable, as attached to the wall, but in reality, they can easily withstand weight up to 400 pounds. 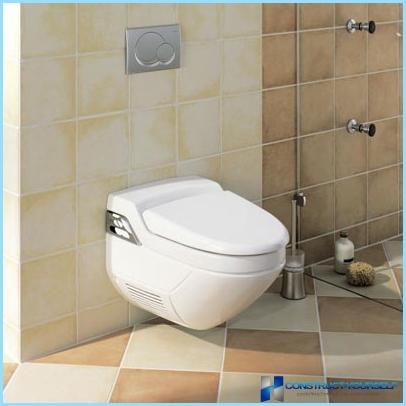 The main advantage of a compact toilet with bidet is that they take much less than a classic. One of the most common models is the suspension with the function of a bidet, which differs from the standing model, only its appearance.

The advantage of the soul, which is posted separately, is that it can be combined with all types of toilets. The disadvantages of such models include the fact that it can leak water at the site of attachment of a sprinkler or hose. In addition, on the hose, condensation may form. All together, it provokes the appearance on the floor puddles of water.

That is why when buying toilet with bidet functions, you should always pay special attention to the quality of the mixer, all seams and fasteners. These details affect how long it will be possible to use the product, how it is possible to set the temperature of the water will leak water.

When choosing a mixer for bidet set-top boxes, it is desirable to give preference to the more expensive models with thermostat (built-in temperature sensor) that allow you to not worry on the issue of the constant setting the desired temperature of water. The thermostat is especially needed in the situation where the temperature changes in the water system are regular.

Today, the market represented a large number of different models of wall mounted toilets with bidet functions from many firms. Domestic manufacturers especially popular plumbing is Santeri. In the manufacture of products of this company uses quality raw materials, passing strict tests for environmental. The complex technique of roasting makes the enamel resistant to many corrosive chemicals, making the design of the toilet remains strong and white for a long time. In addition, each model is specially adapted to the conditions in our country, especially to the water supply system.

Among manufacturers on the positive side itself, managed to establish a Portuguese company Sanindusa sanindusa of the Bulgarian company Vidima Vidima and a branch of the American company Ideal standard Ideal Standard. The products of these companies at this point I think the highest quality that ensures high demand in our country for several decades. In addition to the technical part, toilets with bidet from these manufacturers delight with its design, which has the taste of even the most demanding people.

Modern bidet cover can be considered quite functional, considering that its direct function it can perform multiple tasks. 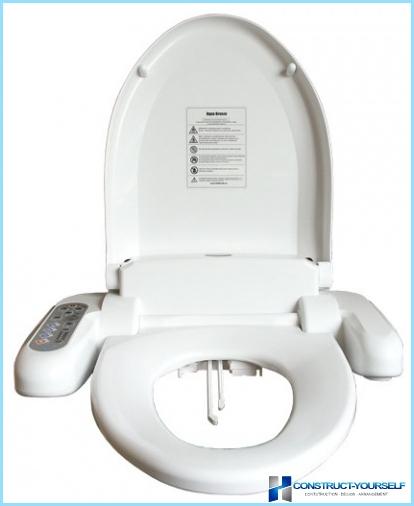 What tasks you can perform cover electronic bidet toilet?

Modern electronic toilet seats with bidet functions are able to zonirovat the air, regulate the water pressure, carry out heating of the toilet seat and so on. To control the device you can use remote control or buttons built into the case cover.

This cover is a fairly simple device that you can easily install on their own. 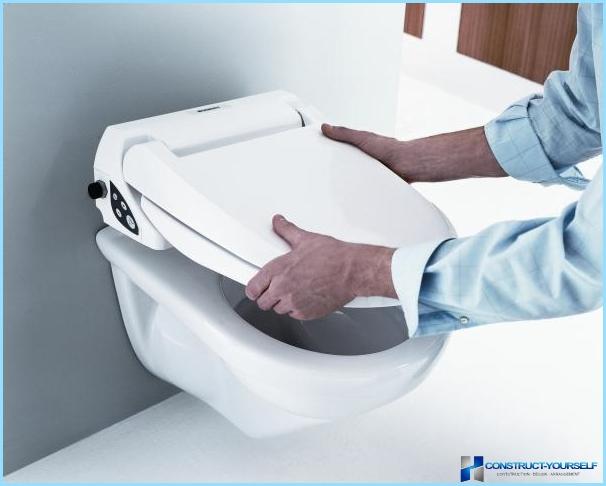 How to install the cover of the bidet on the toilet:

As a rule, to carry out the installation of a bidet can cover for almost every model of toilets, although in some cases, there may be some difficulties. This is what you should rely, going to the store for purchase. Before choosing a device, you need to remove the cover dimensions mounted on the toilet, and only after that consult the seller about compatibility of models. If the toilet is too small or large sizes, it is likely that you take out suitable cover bidet did not work as they are made in standard sizes.