First appeared in Europe large-leaved hydrangea. It happened in the late XVIII century. They brought her French travelers from the island of Mauritius located in the Indian ocean. Part of this first French expedition around the world was the Prince of the Roman Empire K. G. Nassau-Siegen. It is believed that he named the plant in honor of his beloved sister. 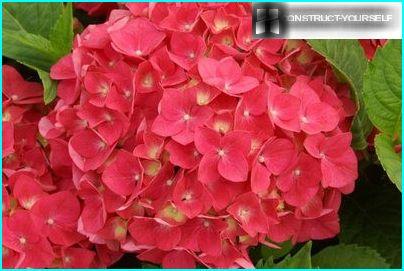 Large-leaved hydrangea was born on the island of Mauritius and appeared in Europe thanks to the first French world expedition. Such beauty is impossible to miss even in the luxurious Governor’s garden

However, other sources claim that the name Bush was in honor of the beloved French physician F. Commerson. There are not so romantic version of appearance of this name: the hive was discovered in the Governor’s garden. Here and named it in honor of this event in Latin hortensis, which means «from the garden».

Otherwise this moisture-loving shrub called gerontia. In Greek hydor indicates «water», and angeion — «vessel». And it wasn’t just that the bushes need frequent watering, but in the fact that its seed pods look similar to jar — jar. But more pleasant to the ear the name gradually prevailed over the Latin.

The types and varieties of hydrangeas

The family Hortenziyevyh (Hydrangeaceae) includes several dozen varieties of this plant. Until now, their exact number is not defined, because some instances cause experts differences. Most often it is a blooming shrub with attractive large leaves. But sometimes it is also called the vines, and even small trees. 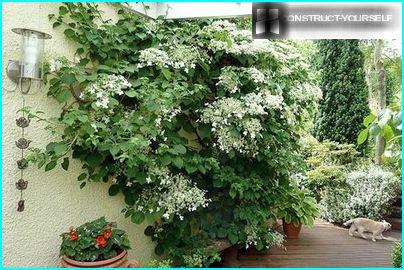 Surprisingly, this twine plant, too, is a kind of hydrangea. It looks very impressive on the exterior walls of houses in the area with a mild climate

As a rule, are formed of hydrangea paniculate or corymbose inflorescences, which bloom at the ends of shoots. Their edges are major sterile (infertile) flowers and in the center is a small fertile, that is fruit. Certain types of flowers are fruit-bearing: they form a large and very attractive balls.

The petals of this shrub are quite a variety of colors: they come in white, pink, blue, red, purple and even blue. They are able to please any gardener-foodie. But the leaves on its appeal are not inferior to them. With proper care, they grow large, juicy and bright. From such a beauty hard to resist. 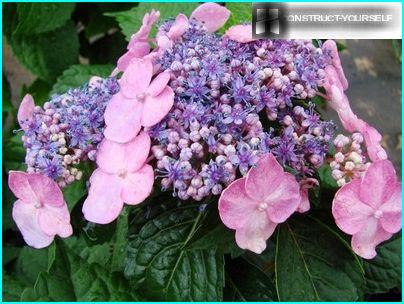 Large and flashy flowers placed around the inflorescence, complement fine, but fruit that constitute its Central part

Usually in the open ground planted the following species: paniculata, tree, groundcover, garden, radiant, ash, serrate, petiolate, large-leaved and rough. We will focus on those varieties that are most popular in Russian gardens.

Of course, this inflorescence is called a panicle, and the hydrangea – paniculata. Panicle really similar to soft ice cream, squeezed in a waffle Cup. It has a conical form, composed of large and small flowers. Has a length of 20-25 cm. 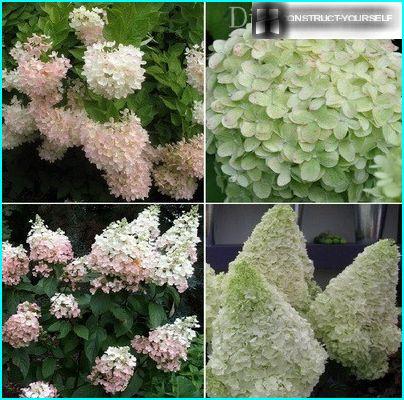 At the beginning of flowering the petals of the plant have a white color, they are gradually turning pink, and before the end of the season add to the overall palette slightly greenish tone. This change of shades characteristic of this wonderful shrub. Its leaves have the shape of an ellipse. On top they are covered with velvety fuzz. Even more, they pubescent below. 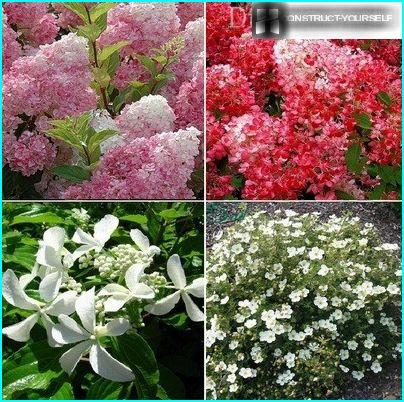 Flowering paniculate species is characterized by its duration. It begins with early varieties in June, and with the arrival of July this process encompasses all of the variety. What are the varieties of this flower are planted in Russia?

To enumerate all varieties of paniculata hydrangeas do not make sense, but believe me, it is sought in all its incarnations and variations. Is what to choose and what fun to work. 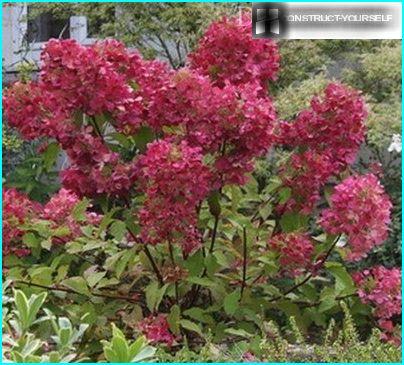 Inflorescences hydrangeas often change color throughout the season, but Sims Red an amazing variety of this plant: it changes the colors of their flowers twice during the flowering period

The tree hydrangea is also able to endure our climatic conditions. It freezes only in severe winters. Despite the name, it’s still a shrub, and in height it grows about 1.5 meters. Its large ovate leaves are at the base of the notch, similar to a stylized heart, and indent the edges. The surface of the green sheet and its reverse side – gray.

Here are some names:

Of course, this list does not show all the wealth choice: he only lifts the veil that still hides many mysterious beauties. 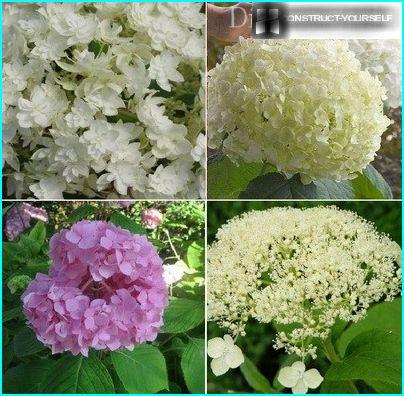 This species of hydrangeas a loose inflorescence also have the shape of a shield. Large flowers are located at the edges, and small form the center. But the most amazing thing in the Bush – its roots and suckers, which grow on shoots. With their help he is able to climb the wall of knowledge at a height of 25 meters. Broad green leaves seemed to cover the wall, forming a single cloth. 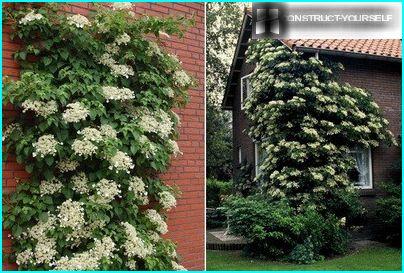 Stemmed hydrangea can be used not only as a graceful climber, but also as an excellent groundcover

Unfortunately, petiolate species is not tolerant of our harsh winters. If in the Baltic States you can leave it on poles, then we have to not only remove, but to hide. However, as a great groundcover it also can be widely used.

Such a welcome and whimsical large-leaved hydrangea

This plant is a frequent guest in the domestic area, which always pleases in a variety of colors. Various forms it not only flowers, but also buds. The only drawback of this beauty is the need to shelter in the winter. May freezing, and sopret if the shelter will show her excess.

If it will freeze slightly in autumn or early spring, and then depart, then the damage can be just flower buds. Therefore, it is better to breed her in a greenhouse and then planted in open ground. Autumn may again sit out in the greenhouse, and in the winter she would have to move to live in the basement. 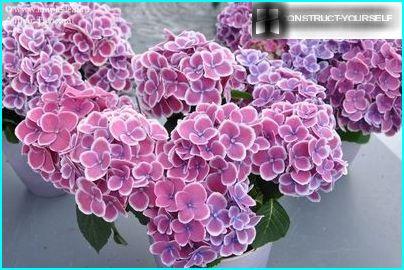 This kind of hydrangeas you can not only buy in the tub, but also planted right along with the barrel: it’s easier in the future to transfer into a greenhouse in the basement

Soil requirements and peculiarities of landing

It is believed that tree planting the best time is spring or autumn, but these bushes can be planted even in the summer. It is important to buy them in a pot or in the tub below the root system was closed. However, in order not to risk, it is better for planting choose spring.

Better if at lunch time, Bush will be in the shade or partial shade. The hot sun and the drought it brings very bad. In the drop-off location needs to be established a special regime of the soil. The ground must give an acid reaction. To create it in the landing pit put peat or a special potting mix for azaleas. Good mixture of peat and compost or leaf mold in equal parts. Compost can be exchanged for potassium sulphate and superphosphate. 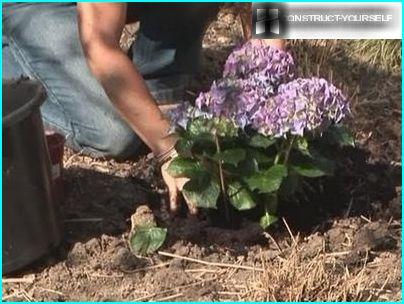 When planting hydrangeas is not only good to prepare the soil, but also to guess the weather: night frost can damage the whole plant or only the flower buds

Dig a pit 50 cm deep. Its length and width — not less than 60 cm the Soil should be permeable and friable that the sapling was not having difficulty breathing. Future of the Bush was quite lush, it roots just before landing to shorten it, and trim the shoots to 3-4 buds.

The seedling is placed in the soil, then watered, and then around it place the peat mulch. For mulch suitable film and sawdust, paper and burlap, compost and pine needles, straw and even clay. So in the upper soil layers remain correct air mode. When planting as hedges between the seedlings should be left at least 2-3 meters distance. In this case, the bushes will not strangle each other when they grow.

The care and feeding

How you will care for your hydrangea, and she will delight you from spring until late autumn.

Once again we remind that in direct sunlight hydrangea can survive but it will look no matter. She will lag behind in development and growth, will give small and ugly buds. As such, it needs shade or partial shade. 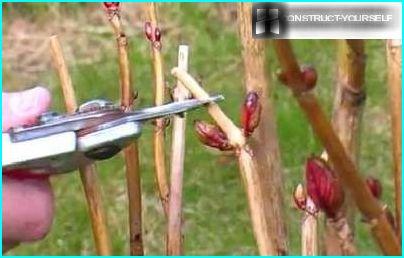 Read more about care, pruning and winter watch the video:

How to propagate plant?

Beauty is never enough, so, sooner or later, it will want to multiply. How to do it? 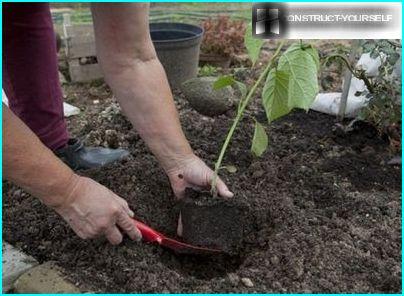 The easiest and fastest way to propagate hydrangeas is cuttings. The result will be received in 20-25 days, and by autumn the plant well enough

As you can see, despite its temperamental nature of this plant, it is possible and necessary to cope. If you do it right, you can enjoy a wonderful view of your garden. And will be proud that such beauty had made with his own hands.