Many residents of cities in recent years often become questioning. This is not surprising, because the country is first and foremost a wonderful occasion to relax from the city fuss and daily problems. Quite often fans of country leisure, prefer to have a small farm on the site. But before you get any animal you need to think about where they will live. 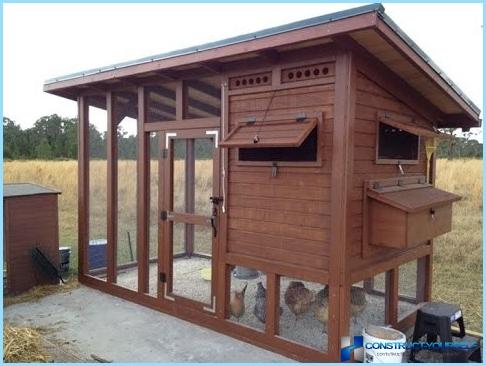 In this article we will talk about how their hands to build housing for chickens, it will be able to find useful information as novice gardeners who are planning to have a small number of chickens for personal use and the farmers whose chickens will be the main income.

Not to be disparaging to the construction of a chicken coop. A good poultry house is primarily the health of chickens, which directly affects the quality of the eggs. If the coop is very small in size, it will be cold and dirty, in this case, the desired effect in the breeding of poultry, to fail.

Video how to build a henhouse with your own hands

Before construction, be sure to choose the right place where to place the coop.

To build a chicken coop is better on hills after the rains and when the snow melts, the valley flooded, in any case, we should not build a house in a swampy area.

The main requirements when selecting a location ↑

When building the coop, consider the following requirements:

It is important! In the calculation of area for construction, it is necessary to take into account the fact that in the future the number of individuals likely to grow and therefore expect a place with stock. 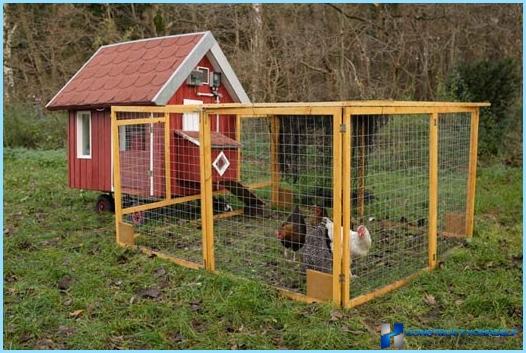 Step-by-step construction of a chicken coop ↑

The construction of a chicken coop, you must perform the following instructions:

Step one: build the Foundation ↑

Before the construction of a chicken coop, you should make a drawing of the future building. Based on the size and weight of the house, it is possible to determine the Foundation, but rather what material to build it.

Pier Foundation is a good option for chicken coops with small weight.

The main advantages of pier Foundation: 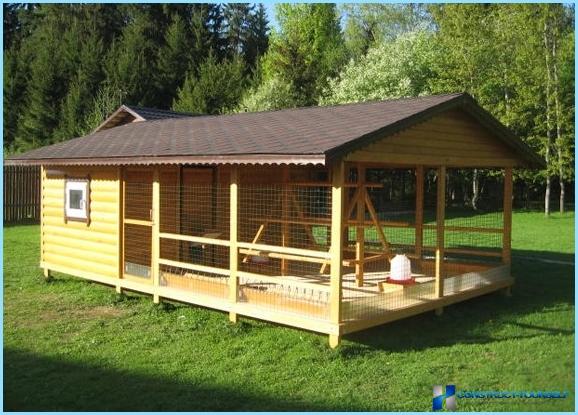 To mark the Foundation will need a thin rope and metal rods. According to the plan, you need to hammer rods and covered them with a rope so that it does not touch the ground. After, you should verify the accuracy of the marking, it is possible to use a tape measure.

Layer of the earth twenty inches, inside markings must be removed. Next on the perimeter of the future the coop installed cabinets. They must be positioned at a distance of one meter from each other. Under cabinets to dig recesses 70 centimeters in depth, and their width should be 50 cm. Tables should be above the ground level 25 cm.

Further, the pit is filled with sand to ten centimeters. After the sand was filled on top of it are placed two bricks on the top of which is placed the cement with a concentration of 1:3. The next two bricks laid across the two first, and then so cabinets are built to the required level. Due to the cement mortar, the Cabinet can be customized to the desired level.

After this work, the construction of a chicken coop should be suspended until the cement hardens, the period of hardening from 5 up to 7 days. After the grout solidifies, the posts need to apply a special paste to protect or ordinary bitumen. You then pour the gravel between the tables and the ground, and his need to fall asleep throughout the area of the future building.

Step two: build everything on our own walls for the chicken coop ↑

To stack boards, we will by the well-known scheme, which is used for centuries. As insulating material that will separate the Foundation from the first bars, you must use a roofing material in two layers. The end beams are connected in a half of the tree. The joists for the floor we make from the bars, which lay squarely. The joists must be at a distance from each other fifty inches. All the cracks and gaps can be repaired with sawed-off shotguns from the bars. 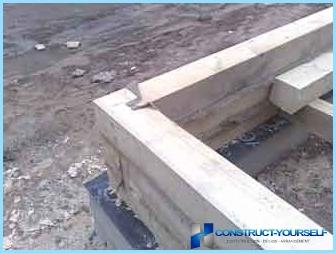 All subsequent boards, are stacked, the connecting method «the tongue-and-groove». Seal the joints by using Logutova fiber. If wood is used as material for the construction of the house itself is wet for better bonding of crowns you can use pins made of wood.

Thanks to the pins, the building does not warp. Under them you need to drill holes on the edges of the future buildings and the perimeter in a staggered manner. The distance between the holes of 1 meter from each other. The pins are driven into the holes of the beams of seven inches. The walls of the barn shall have a height not less than 1.8 m. followed by work on the construction of the roof, lay the beams for the ceiling, build the rafters and put the roof. 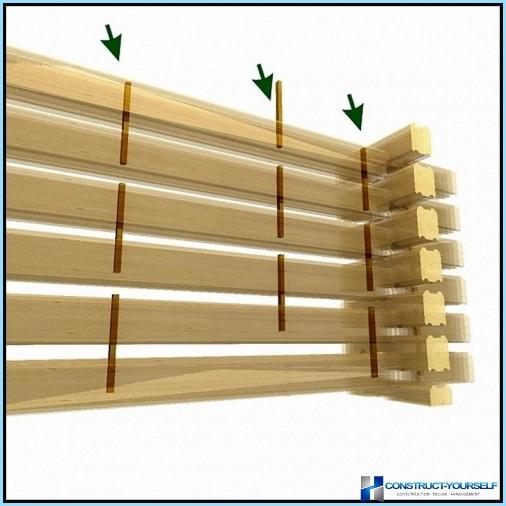 Step three: build the roof and the ceiling of the house ↑

There are several varieties of roofs for such buildings used as a chicken coop shed roof or gable. Everyone decides what kind of roof to build poultry house, you can only say that the gable roof has one, but quite substantial advantage over lean-to. Gable roof allows you to equip a small loft inside the chicken coop, in which you can store food and bedding for the chickens.

After strengthened beams, rolling out the ceiling. As the material for the ceiling, you can use regular boards. Insulate the ceiling much more economical use of coal slag and expanded clay.

Before you insulate the ceiling, you should consider what will be the ventilation in the house. For this made of wood two air ducts, which need to attach to different sides of the structure. One side of the ventilation duct is mounted along with the ceiling, and the second slightly lower, about forty centimeters. Air flow will be controlled by dampers made of tin. 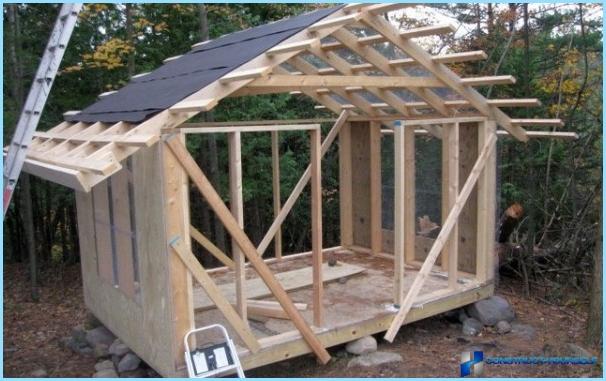 How to build a warm house ↑

Winterizing the chicken coop is performed on the fourth stage of construction. Let us consider the process of insulation.

As mentioned above, the temperature inside the coop, a big influence on the laying hens. When building a coop it is very important to insulate the walls and roof of the premises, but do not forget about insulation of the floor, because if it will freeze in the house will be cold. For laying the floor will need a thick Board with thickness of twenty five centimeters. The bottom layer of the floor we put out of rough boards put on top of the vapor barrier layer, and then stacked bars. The free space between the bars, filled with insulation, and on top of it already placed a floor made of processed planks.

It is important! If after all the works connected with insulation of the house, you still think that the housing for your birds is not sufficiently protected from cold, then as additional insulation, you can use foam. The most important is the insulation in areas with very cold winters. 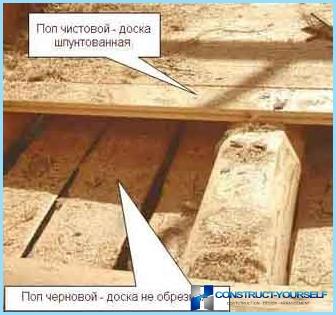 Step five: the internal arrangement of the henhouse ↑

After you have done all the basic work on the construction of the house should be engaged in its internal arrangement. During construction work inside of a chicken coop, care must be taken to execute a convenient way. To calculate the number and length of perches, very simple considering the fact that each chicken will need thirty centimeters of space. The roosts it is better to make from wood. The edges of the perches need to grind, so they become more rounded, this form of perches can not hurt the chickens. The roosts should be installed at a height of 70 centimeters, and the distance between perches must be 60 inches.

It is important! Much easier cleaning process, special trays, or some other shallow vessels, which should be put under the roosts. 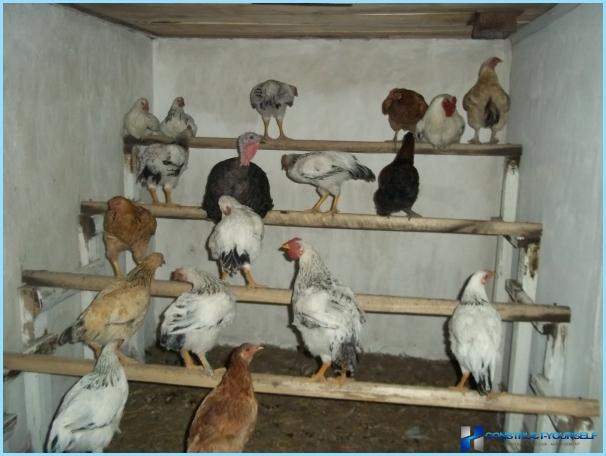 A critical element inside the chicken coop are the feeding trough. Many feed the birds, just throwing food on the floor of a chicken coop, it is completely wrong because, the birds in such cases it is necessary to use already dirty food. That can have a negative impact on their health. To make the trough can be made of wood, and positioning them better on the hill. 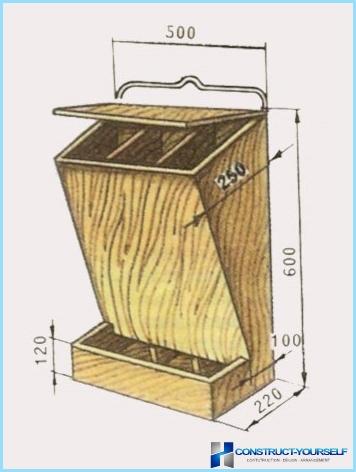 Material for the construction of a chicken coop with their hands ↑

The basic material for the construction of the house will serve as the tetrahedral sticks. The purchase of this material does not require large financial costs, and build from it easily enough. The amount of material depends on the size of the future house.

How to build a goose house to avoid ↑ 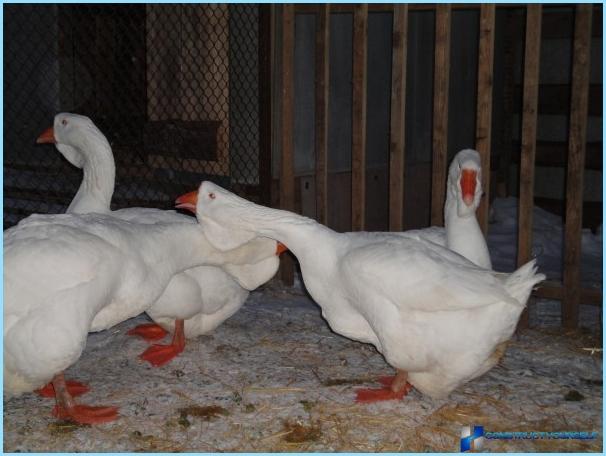 How to build a nest for egg laying hens ↑

Finally it is worth to take care of the place where you will be laying hens. To build nests for egg laying hens from conventional wooden boxes as bedding need to use straw or sawdust. Positioning of the nest should be in the most inviting areas of the coop. 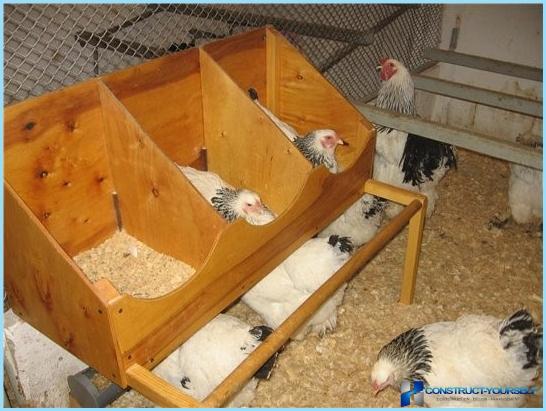 Much easier the process of cleaning, if the floor to put bedding in the form of sawdust or straw.

The construction of a chicken coop must be approached responsibly, as it is home to your birds and the house are known to be reliable and comfortable. Demonstrated in this article the method of construction of the house, has such advantages as: low cost materials of which built the house, as well as the simplicity of the design, thanks to which such coop will be able to build each.

Most importantly, it should be remembered that the construction of a chicken coop must be approached responsibly, as it is home to your birds and the house are known to be reliable and comfortable.