The modern building like a dull saw the arrival on the market of building materials is relatively unfamiliar concrete blocks. Unusual material was uninteresting for high-rise construction, which occupies more than 70% of the portfolio, especially its production fended major manufacturers focused on wealthy buyer. 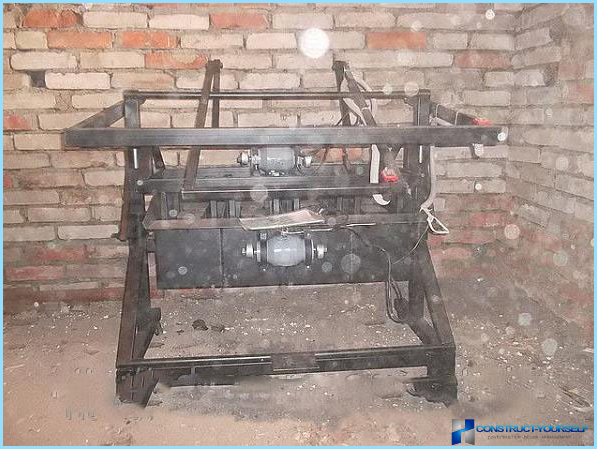 Further – is easier, small firms and factories, sought a suitable product for small batch production machine for the production of a block of concrete mass has modified and partially supplemented from the Western experience and put to use.

Now, if you want, you can get one of the variants of production of concrete building blocks with their hands:

Note! The production process of the block, using the machine requires a power of the power plant and cost of electricity by about an order of magnitude smaller than in the static compaction process, as is the case with the materials of clay-based.

Handicraft machine, whether to contact the manufacturer and use? The easiest way to produce a concrete block with his hands is a collapsible or easily removable form and manual tamper. The prepared molding composition is filled and compacted with a special tool until the level of mixture reaches the edge of the molding box. 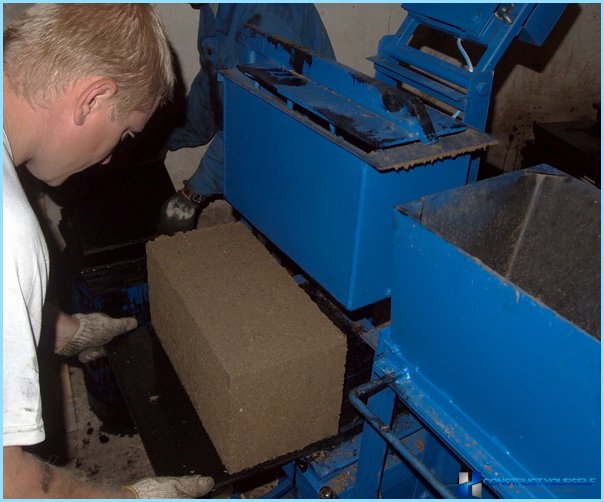 Artisanal press dramatically increased the productivity of concrete block. As a rule, the machine is equipped with a detachable form for the manufacture of stone and podpisuvaus lever. All operations – loading concrete mixture into the form, setting it on hand press, pressing with a shock linkage or the vibrating mechanism and removing from the press, everything is done manually. The main thing – the quality of such a concrete block is slightly higher than in the case of hand-moulded. 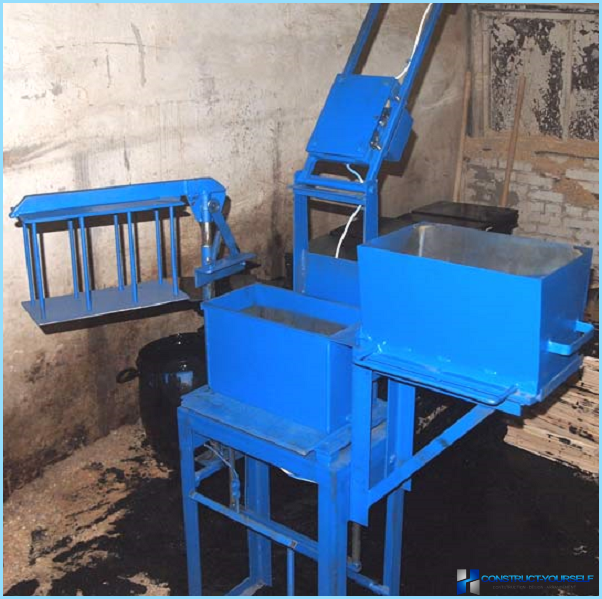 A similar technique can safely be called semi-professional. Most often purchased for the production of blocks in the individual construction under the order or for sale. They are simple in operation, require minimal skills, associated primarily with the provision of safety rules.

Industrial designs can be divided into three main categories:

The force applied to the lever, combined with the vibration of the eccentric in the top of the form. In the end, for 1-2min, the mixture is compacted to desired consistency. Further, with treadle bottom cover open, and ready pressed blocks are squeezed down onto the receiving tray.

Vibrating device for compacting the mixture of ↑

Among the mechanical devices, made by hand, all the more common artisanal simulate professional vibratorhow or of the machine. This only confirms the effectiveness in the machine the principle of molding by vibration. It is based on the vibration generator, transmitting vibrations of the steel box-concrete mixture. When you successfully selected the frequency of oscillation of the concrete mass can samoletnaja to considerable values, making it the most successful solution in the design of the machine.

The vibrating table is most often used as auxiliary equipment to prepare the form before passing it on a vibrating or static formulacell block.

In the simplest scenario it is a small frame, welded from a steel profile or area, in the upper Central part are vertical slide for mounting a collapsible form for the block. Top form has a small add-in, which is fed concrete mixture in the molding process. Skids rigidly connected with mounting a pair of motor – top cap. On the shaft of the motor mounted a massive eccentric. The mass of the eccentric and size of the artificial imbalance is regulated by extra weights or heavy washers. Thus, the manually selected amplitude and frequency and vibration shape with the sealing mixture.

Compaction-concrete block such equipment is performed in the following order:

It is important! The most complex pressing process is the selection of the required moisture content of the mixture. The mixture should be fairly loose and sticky, but when pressing on the vibrating water or solution should not go out of scope.

The use of the machine during the manufacturing process allows to refuse from heavy and powerful hydraulic presses, and to organize the production of concrete block, which is called, «stream». The vibropress is in commercial production in most cases is equipped with one or even two bunkers-drives, in which the mixture is constantly mixed and stored before being loaded into the form. 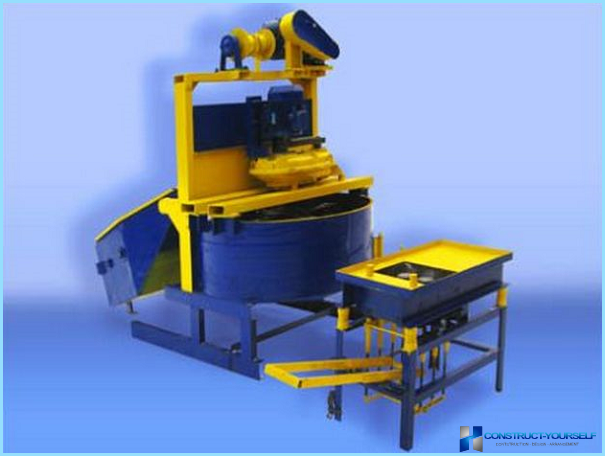 The installation itself is performed as a single unit with a metering device and a mechanism of release of the stamp from ready-made blocks. Often included with the machine install a second tank lining plastering material. The result is a concrete block with a plastered surface.

Performance this setup allows for the working day to produce up to 20 mThree wood concrete mixture. Advantages – much higher quality unit, high ROI and maintainability. If you work 50% of the maximum performance and ongoing implementation of the manufactured product, the machine pays for itself in 6-7 months of work in one construction season.